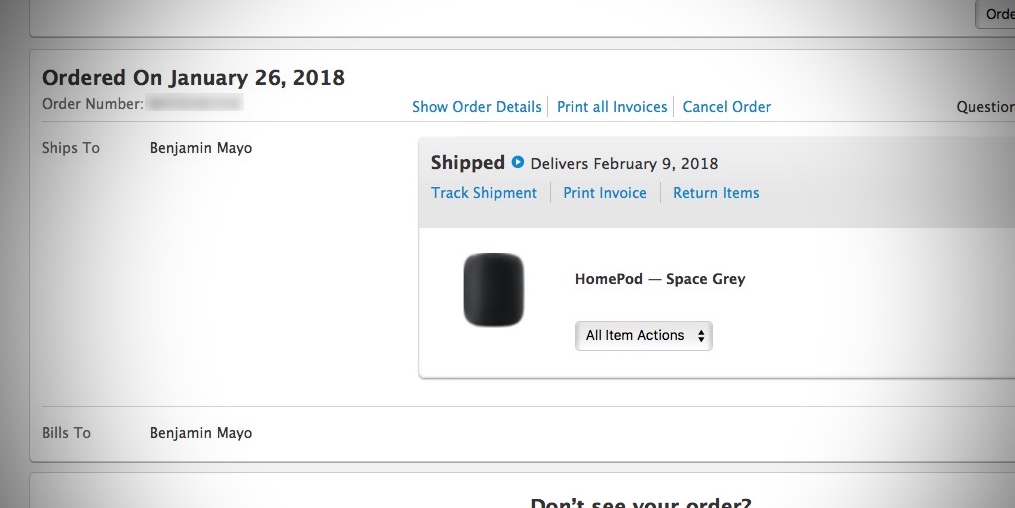 The HomePod launches this Friday in the US, UK and Australia. Customers are now getting Apple Store shipment notifications for their units right on time for Feb 9 deliveries.

The Apple Store is now sold out of initial HomePod stock but retailers like Best Buy may have HomePods if you are desperate to get one on launch day.

HomePod combines an innovative 360 degree set of internal speakers with powerful A8 chip to dynamically adjust the sound as the music plays. HomePod can sense the environment automatically.

If near a wall, the device will fire ambient parts of the music onto the wall to reflect into the room whilst sending vocals directly through the front tweeters.

The HomePod received relatively positive reviews from early critics, with its sound performance outclassing the rest of the market including Sonos One and the $399 Google Home Max.

Reviewers complained about the lack of Siri voice integration with third party music services; HomePod works best with an Apple Music subscription. However, you can call up any purchased music or content from your iCloud Music Library, as well as AirPlay from another device to the speaker.

As well as music, HomePod includes Siri for personal assistant tasks like checking the weather, adding reminders and controlling HomeKit accessories with voice. However, Siri lacks the intelligence of rivals like Amazon Alexa in some areas. For example, you can not start more than one timer on a HomePod simultaneously.

Siri on HomePod also cannot distinguish between multiple users, which is something a shared family device sorely needs.

HomePod also does not have the same potential for integration with third-party apps as other smart speakers. At launch, the SiriKit integration is limited to note-taking, todo and messaging apps.

HomePod launches in UK, US and Australia tomorrow. Apple has announced that the device will roll out to France and Germany later in the spring.