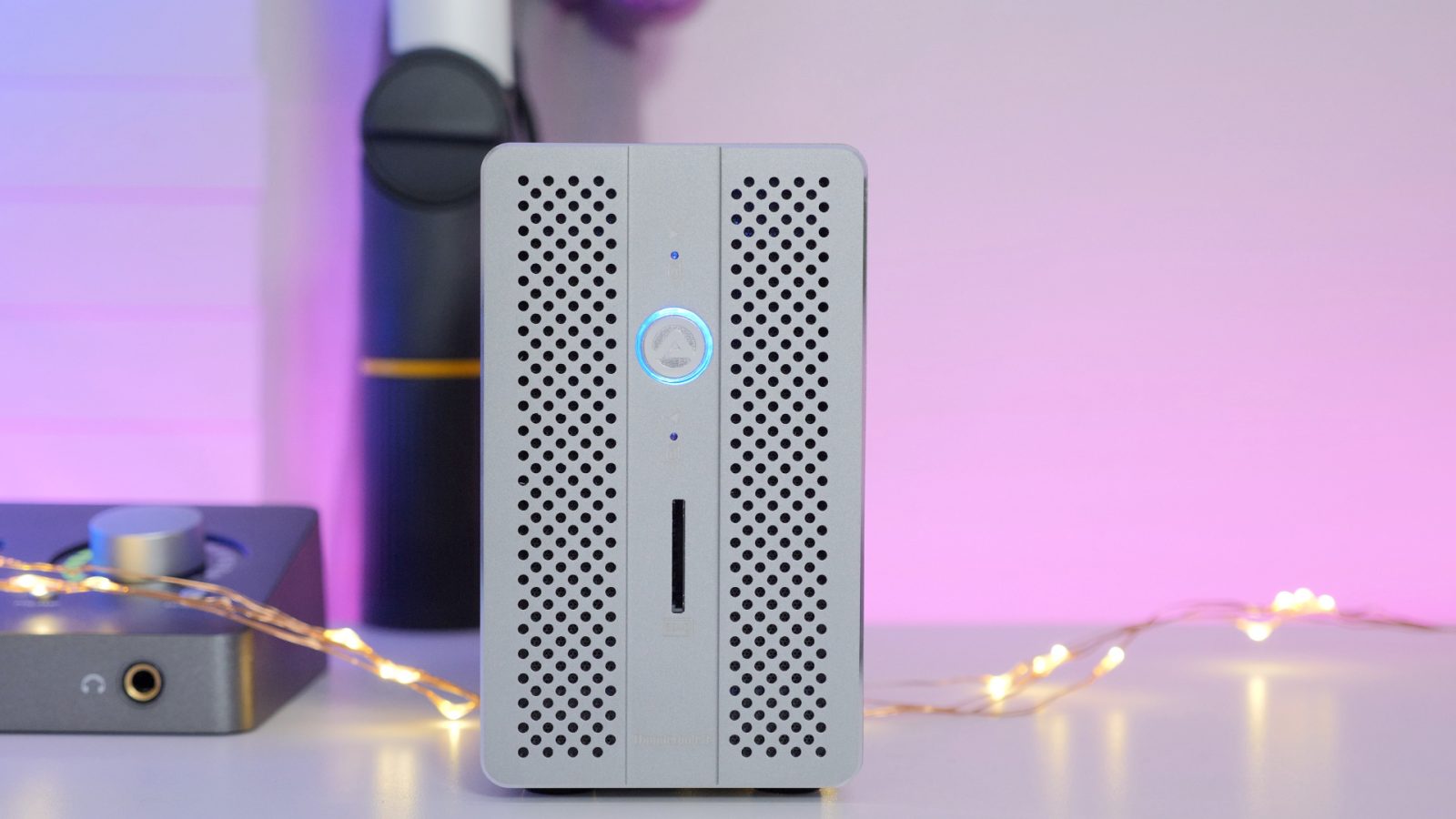 There has been no shortage of Thunderbolt 3-enabled accessories as of late, and companies like Akitio are leading the way with its efforts. The most recent accessory to don Thunderbolt 3 compatibility is the Thunder3 RAID Station, a hybrid dock/external RAID enclosure that comes with several noteworthy features. Is this the Thunderbolt 3 dock for you?

The answer to that question, like many questions, is largely dependent on your particular needs. Do you need an external RAID enclosure? Do you also happen to need a Thunderbolt 3-enabled dock? If so, then the RAID Station may be the ideal solution for you.

As you can see, the RAID Station is a full-featured device with lots of I/O options. But it’s the unit’s ease of use, particularly in the area of installation, that is most impressive to me.

The RAID Station features a completely tool-less design, meaning that no screwdriver is required to remove the drive housing from the enclosure. But Akitio has taken it a step further and made securing the drives a tool-less affair as well.

Both 3.5- and 2.5-inch drives can be quickly secured by the thumbscrews located on the drive housing. This means that you can easily install or replace drives in less than a minute, and it couldn’t be easier. As someone who’s been testing several drive enclosures lately, I can’t tell you how nice it is not to have to break out the screwdriver and deal with those tiny drive screws. 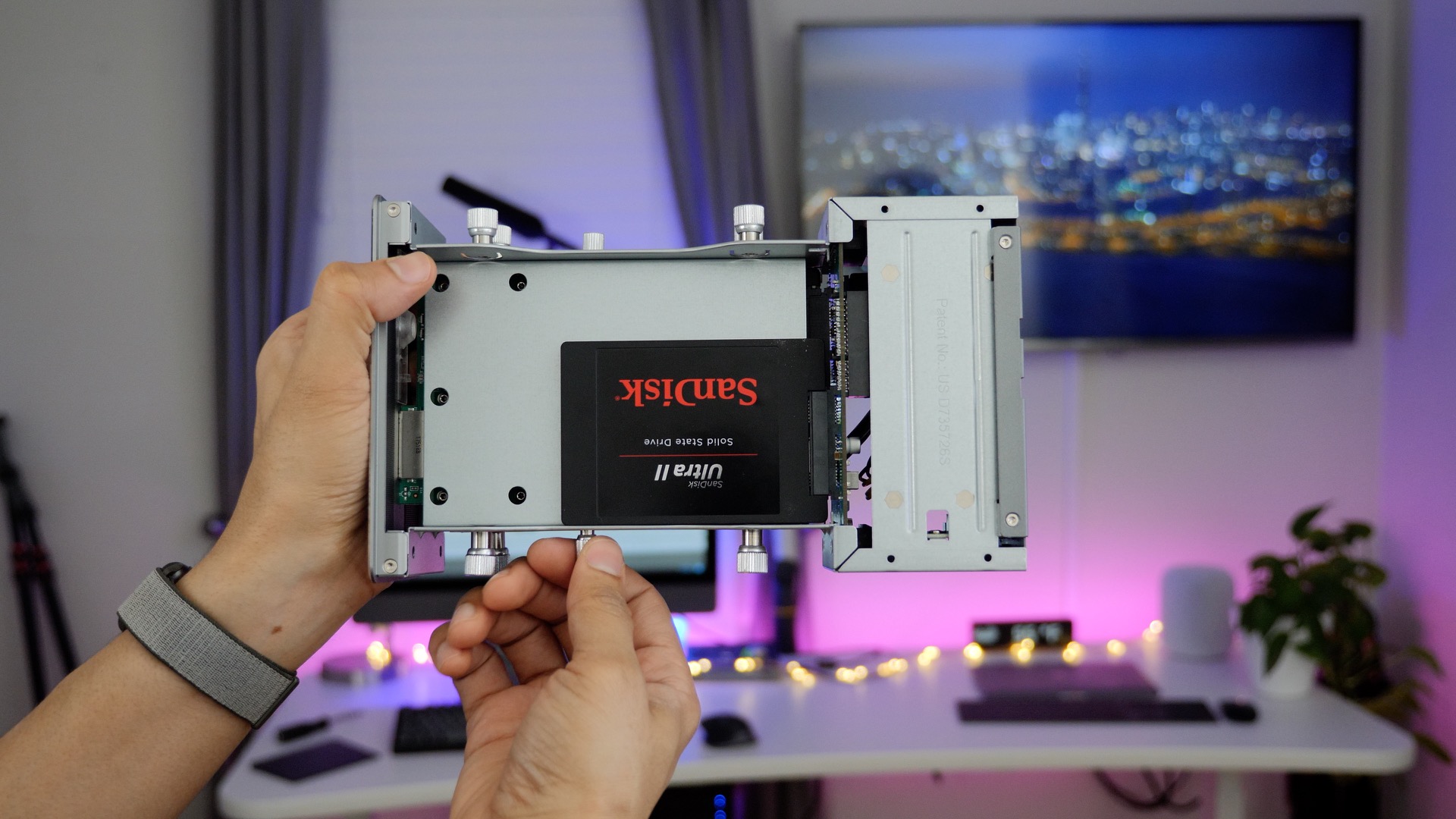 Besides the ease of installation, several additional areas of the RAID Station stand out. A front-facing UHS-II-enabled SD Card slot is a solid addition, especially for iMac users and MacBook Pro users who lack such a speedy option.

As I noted in a previous tutorial, you’ll need to have compatible UHS-II media at your disposal to take advantage of the speed boost that the interface offers. 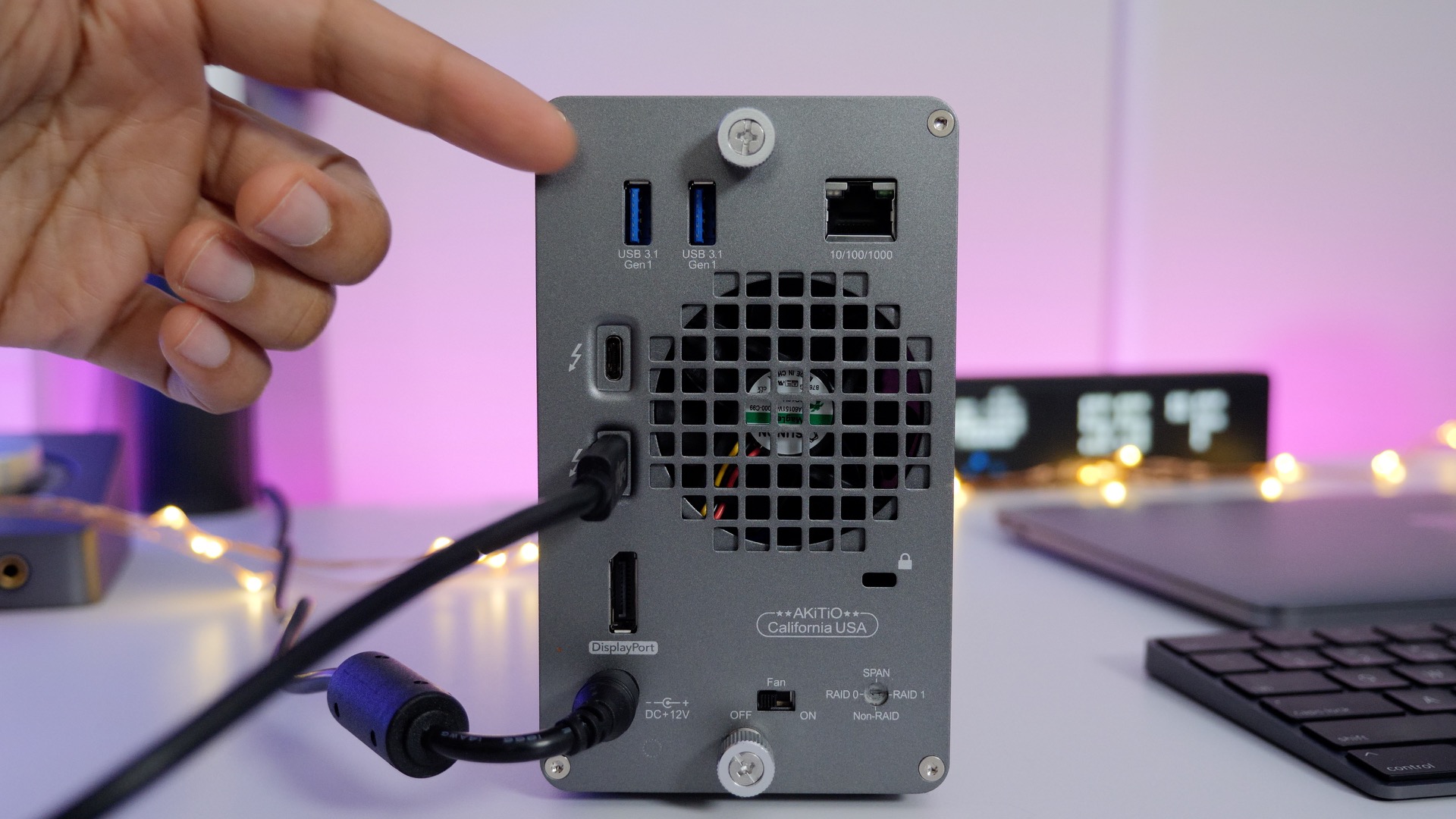 Another feature that I like about the RAID Station is the ability to disable the internal fans. I wish more enclosures offered this option, but I understand why some may be hesitant to do so due with overheating concerns. For what it’s worth, Akitio warns via a sticker on the outside of the device that you shouldn’t keep the fans disabled for an extended period of time.

But even if you opt to keep them running, the fans aren’t that bothersome. With past Akitio enclosures I’ve reviewed, the fans were obnoxiously loud, but the fan inside the RAID Station doesn’t seem all that bad. 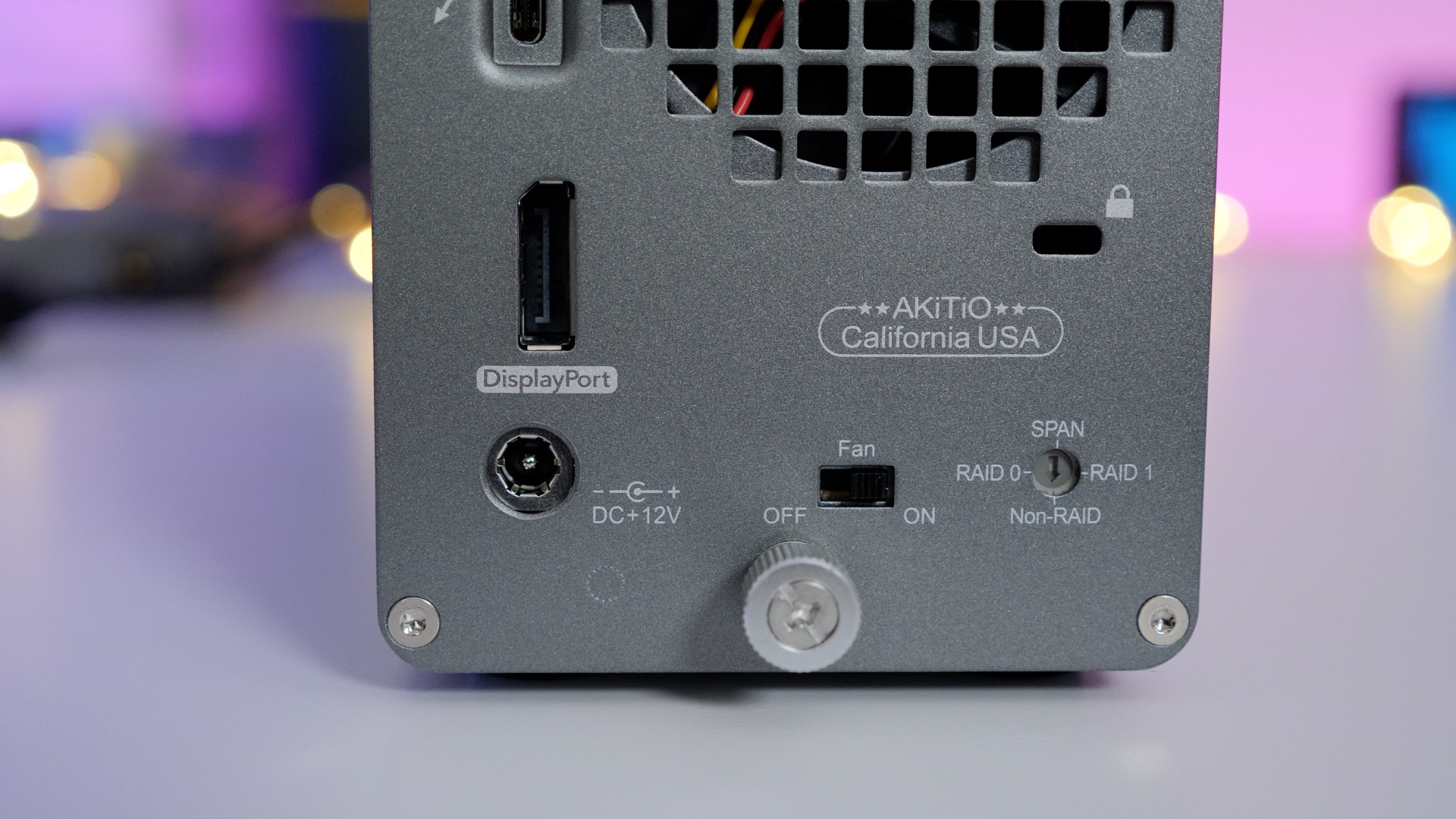 The last big feature, and arguably the most noteworthy thing about the RAID station, is the hardware RAID option. By means of a screwdriver, users can adjust the switch on the back of the enclosure to choose between four different options: Non-RAID, RAID 0, RAID 1, and Span.

You’ll need to provide your own drives, but both 2.5- and 3.5-inch options are on the table. 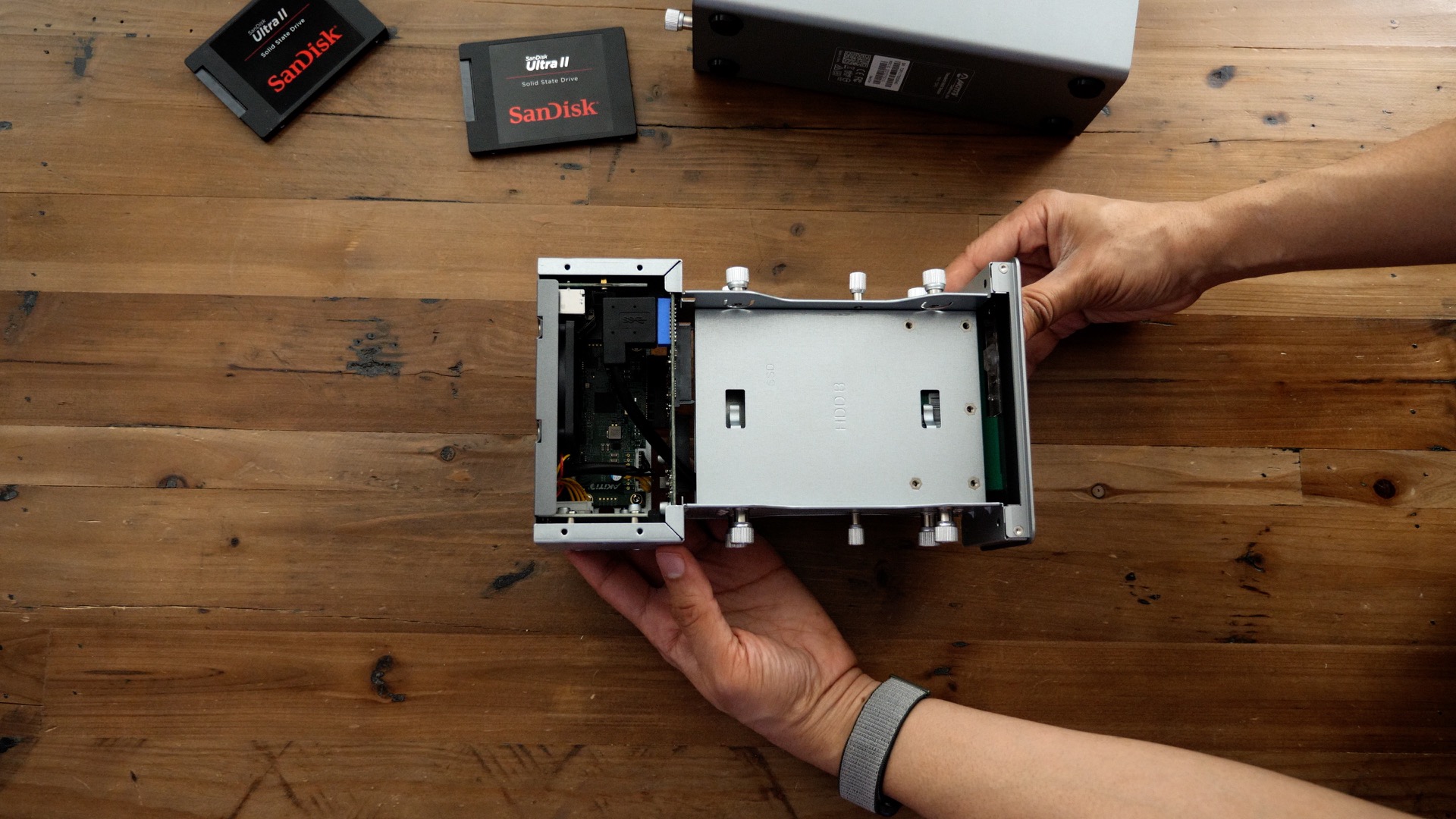 If speed is your main concern, then you can connect two 2.5-inch SATA drives configured for RAID 0. If you need to store lots of data, and want data redundancy, then it may be best to opt for two 3.5-inch HDDs and go for RAID 1. The point is, there is some level of flexibility involved when it comes to your individual needs. 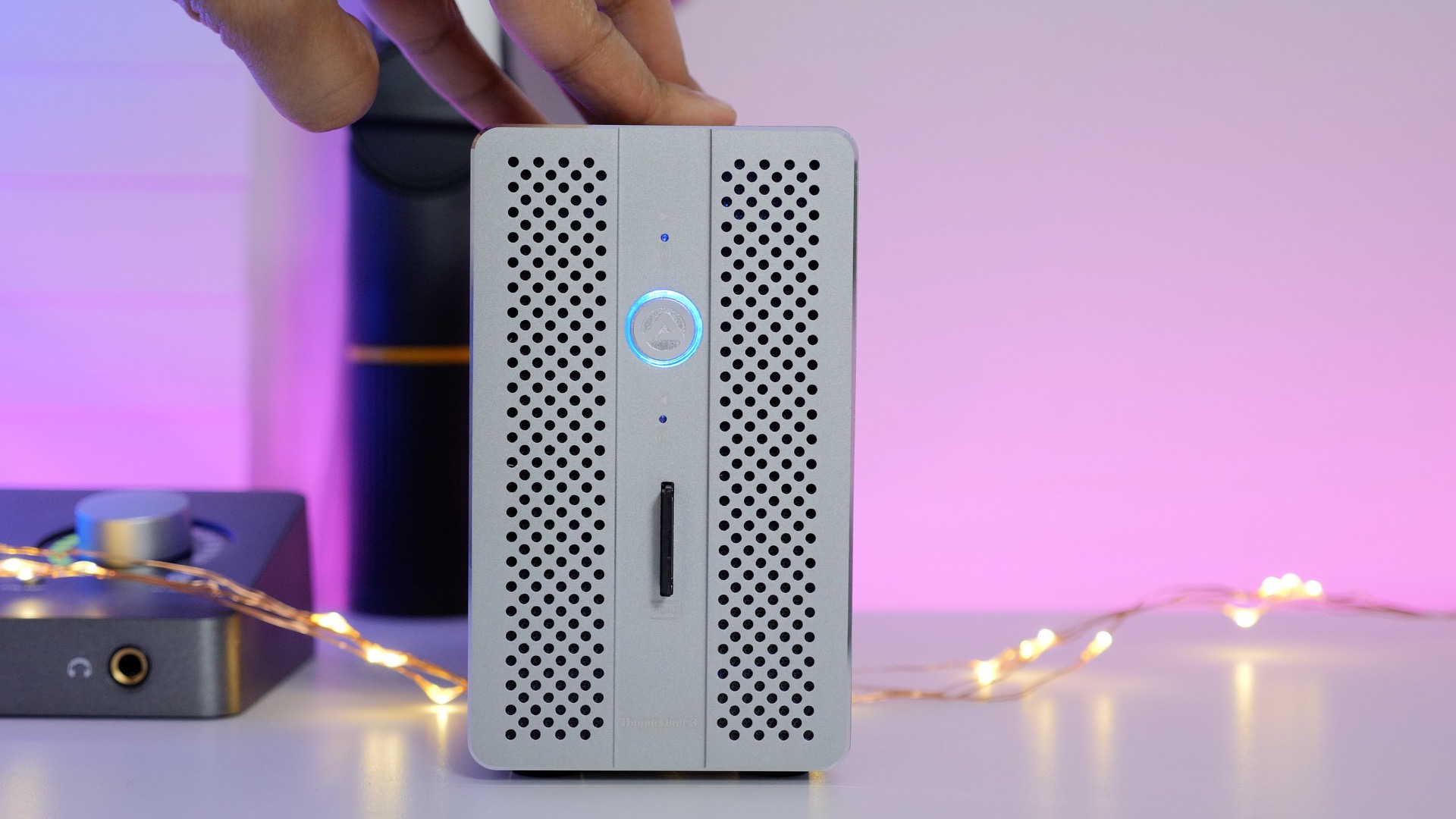 With all of this said, it should be noted that the Akitio Thunder3 RAID Station is a device that’s more of a jack of all trades, not necessarily a master in any particular area. It’s too big, for instance, to work as a portable MacBook Pro dock, so it’s probably the type of dock that you’ll want to keep at your desk.

It also won’t recharge a MacBook Pro at full speeds, offering only 27W of power delivery. On the enclosure side of the fence, it doesn’t accommodate enough drives to offer higher speeds or redundancy options.

Yet, if those are things you can live with, then the Akitio Thunder3 RAID Station just might be the perfect hybrid desktop dock/RAID enclosure solution for you. It features a healthy amount of I/O, even somewhat elusive features like UHS-II SD Card support. It also comes with an impressive tool-less system for enclosure opening and drive installation.

You can find Akitio’s Thunder3 RAID Station on Amazon or B&H.

Have you settled on a Thunderbolt 3-enabled dock for your Mac yet? If not, would you consider the Akitio Thunder3 RAID Station? Sound off in the comments below with your thoughts.