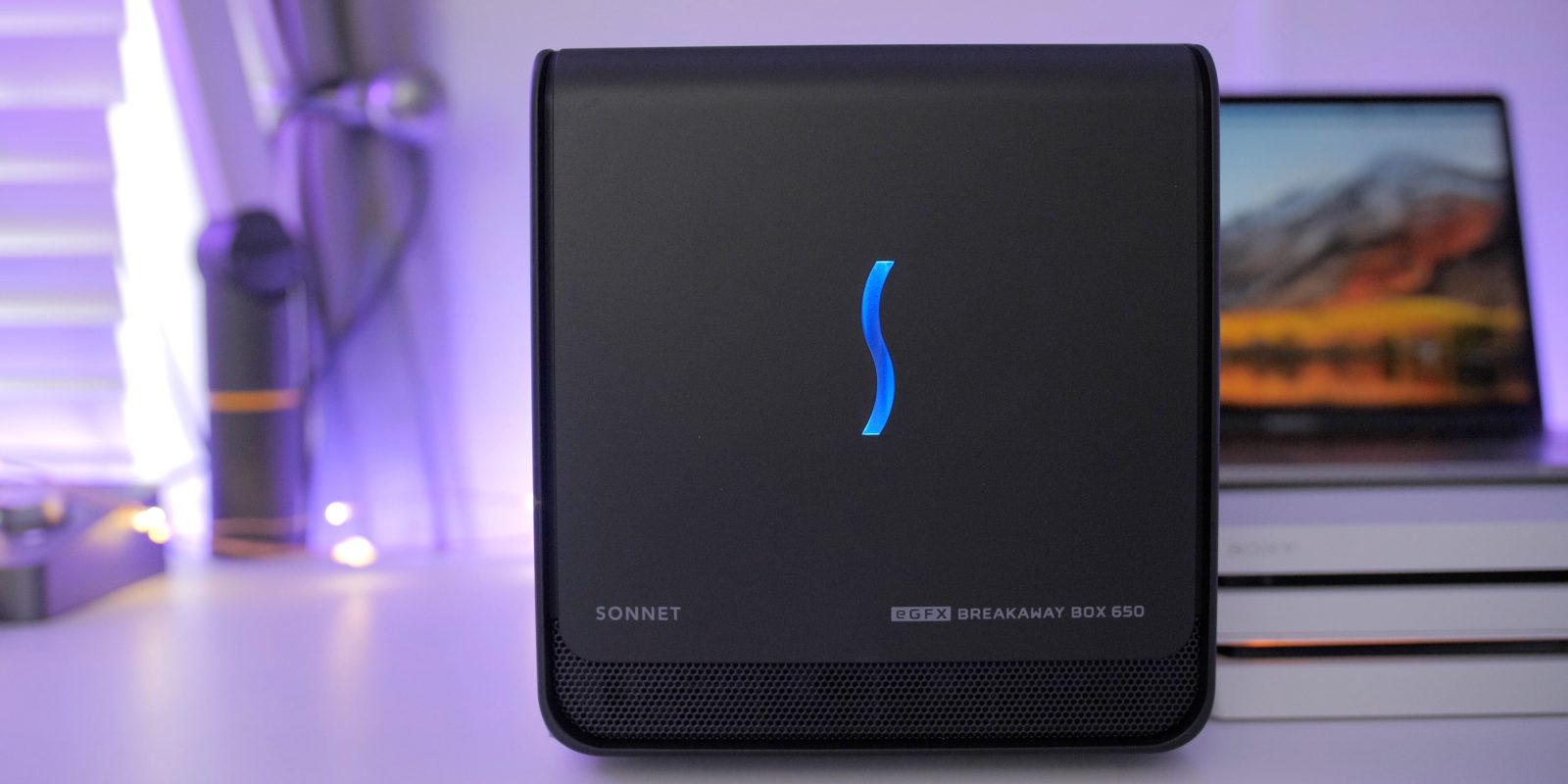 Now that macOS 10.13.4 is out, Apple is now officially supporting certain eGPU configurations for eligible Macs. As I outlined in a recent state of eGPU post, all currently released Thunderbolt 3-enabled Macs are eGPU compatible, including the 4K and 5K iMac, the iMac Pro, and the 2016/2017 MacBook Pro.

With this in mind, we recently got our hands on the Sonnet eGFX Breakaway Box 650W to unbox and document some first impressions. If you’re looking for the best overall Apple-recommended external GPU chassis for your Thunderbolt 3-enabled MacBook Pro or iMac, then look no further. Sonnet’s eGFX Breakaway Box is an eGPU enclosure that can power the most powerful Mac-compatible GPU — the AMD Radeon RX Vega 64 — while providing enough power to charge a 15-inch MacBook Pro at full speed. Watch our video walkthrough for more hands-on details and benchmarks.

You’re not going to find a lot of extra bells and whistles on the Sonnet eGFX Breakaway Box 650W, but what you will find is solid performance, a beefy power supply, and a coveted Apple recommendation for macOS. If you’re looking for an eGPU chassis that will have the widest compatibility and the most longevity of any currently available external enclosure, then I think this is the unit to go for. 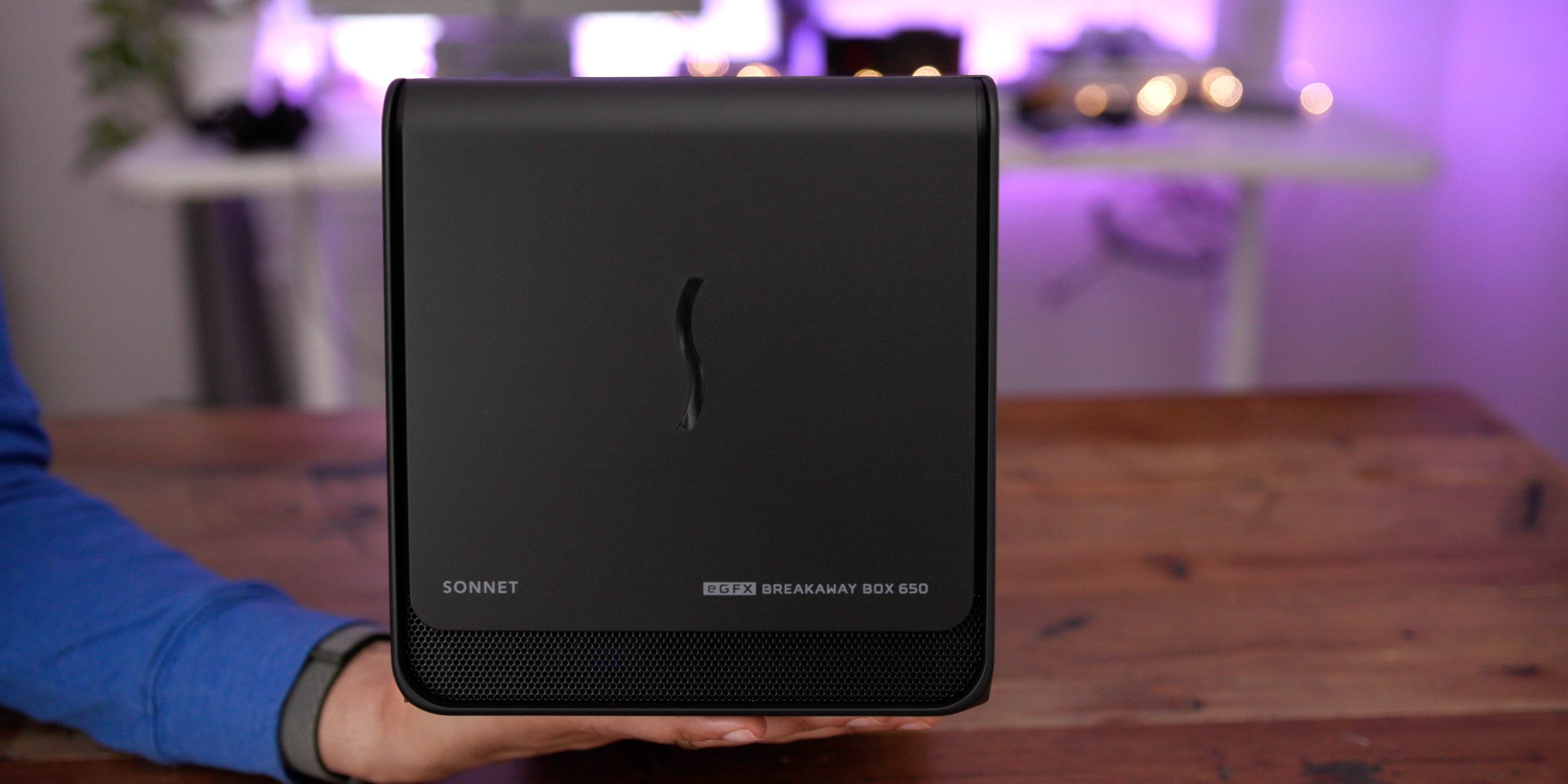 In fact, I’d go as far as to say that the Sonnet unit feels pretty bare bones when compared to something like the Akitio Node Pro. The Node Pro features more polish, such as easy-to-use thumb screws to secure the GPU, along with a handy recessed handle for carrying the unit. What the Akitio Node Pro lacks, however, is a nod from Apple and full speed power delivery for the 15-inch MacBook Pro. 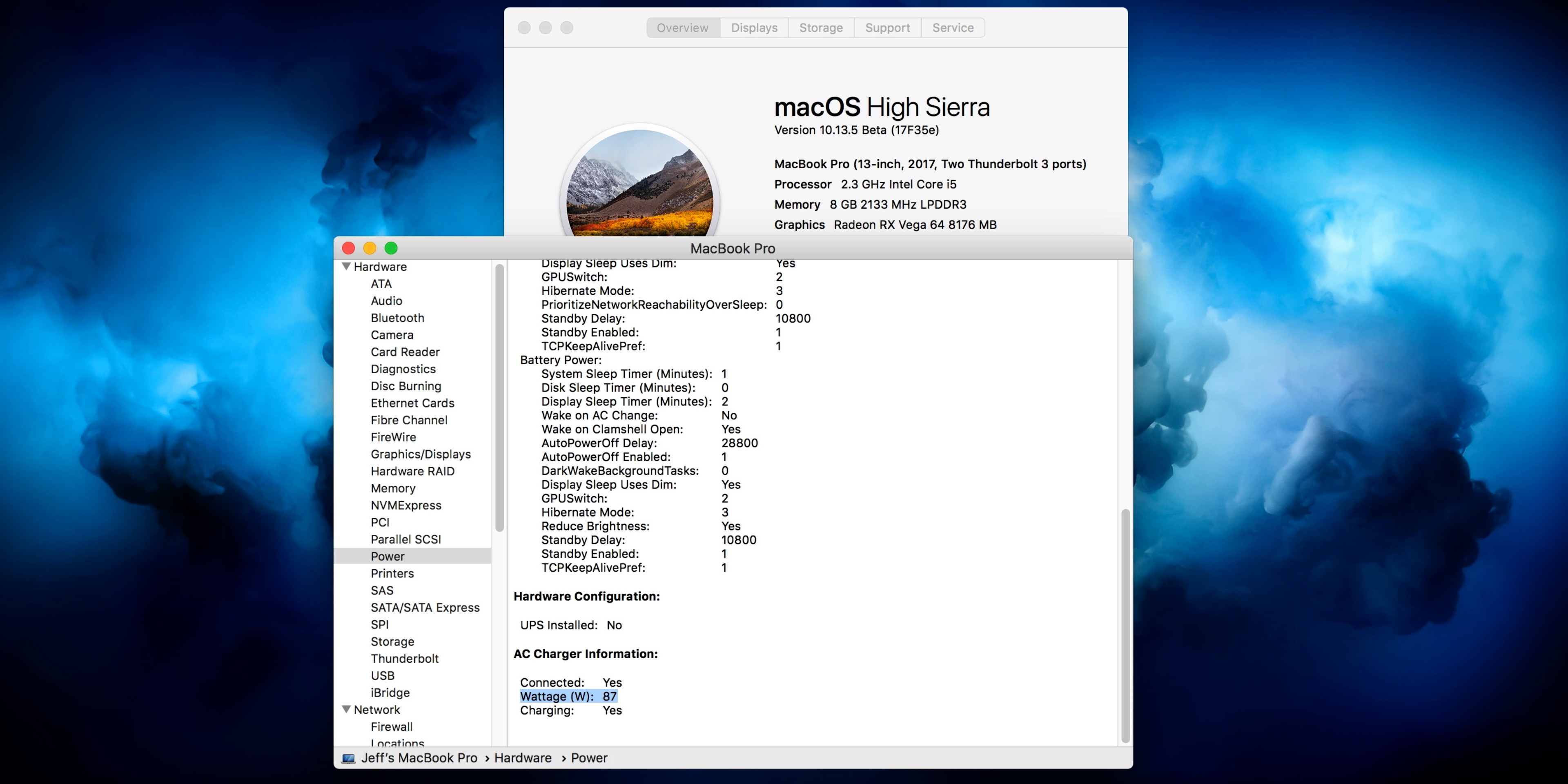 Installing the RX Vega 64 was a relatively painless affair, though installing larger cards, like the ASUS ROG RX 580, takes a little more work. This particular RX 580 is noticeably larger than the RX Vega 64, and required me to shimmy the card inside the case in order to make it fit. Other external GPU boxes that I’ve tried in the past, such as the Mantiz Venus, can’t accommodate larger cards like the ASUS ROG RX 580 at all. 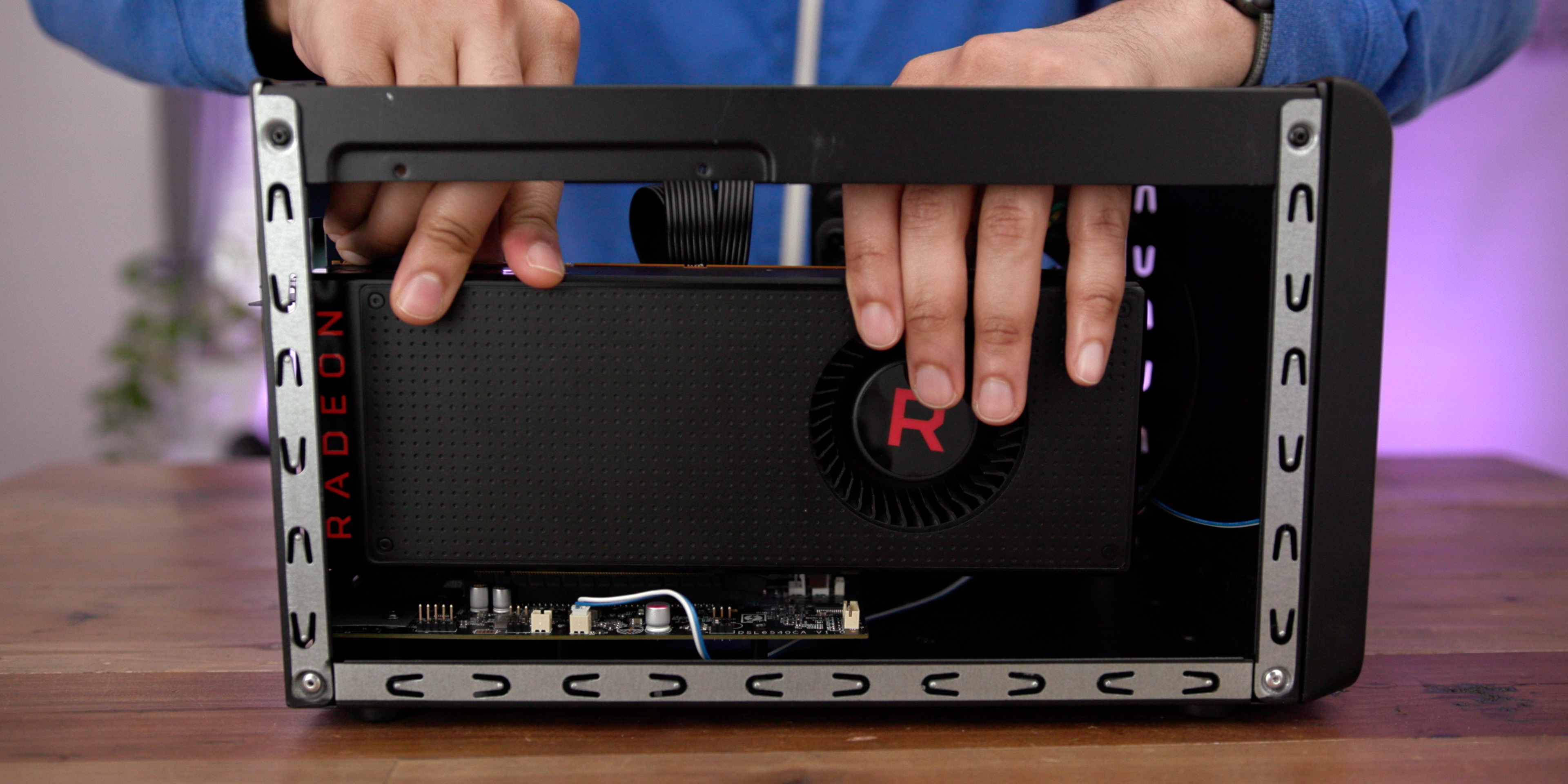 Now that support is official in macOS, it’s extremely simple and straightforward to connect an eGPU to a Thunderbolt-3 enabled Mac. Once the card is installed inside the enclosure, it’s just a matter of connecting the Thunderbolt 3 cable from the eGPU to the Mac.

macOS 10.13.4 is smart enough to automatically negotiate the connection, so much so that it doesn’t require any sort of reboot, logout, etc. It literally just works shortly after you connect the eGPU. For more details on the ins-and-outs of eGPU connectivity and performance, be sure to read our previous State of eGPU post. 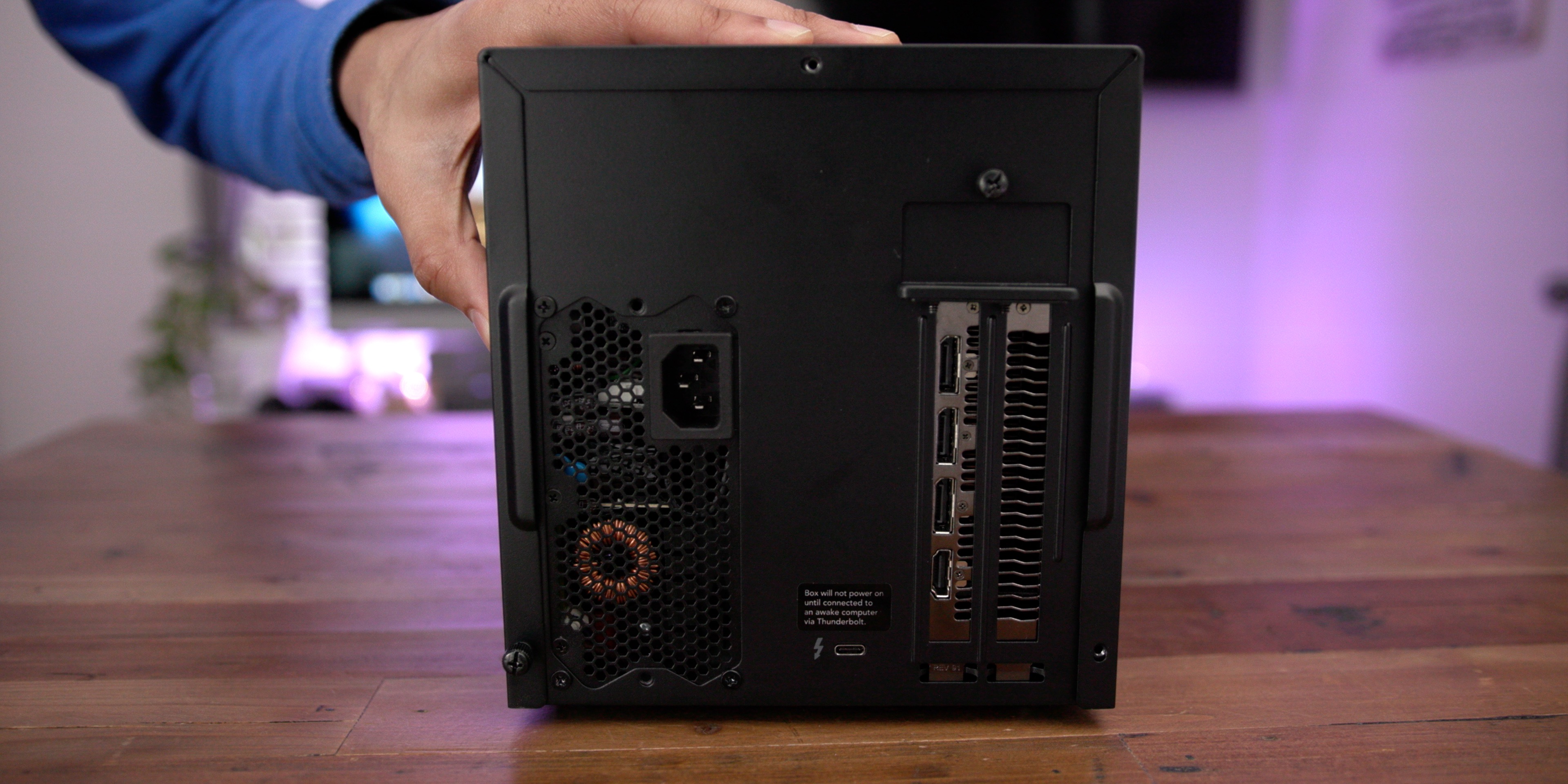 The eGFX Breakaway Box 650W provides top-tier power specs that allow it to fully drive any supported AMD GPU on macOS. That being said, there are a few variables at play. First and foremost, a Thunderbolt 3-enabled eGPU doesn’t have the wealth of bandwidth that’s normally available to a native PCIe connection. Perhaps even more important in the case of macOS is the software support, or lack thereof. Organic benchmarks speak to the potential of eGPU setups, but the real world experience might differ quite a bit, especially considering that eGPU support became official in macOS just a few weeks ago.

As you can see, OpenGL performance is noticeably improved with the RX 580, and even better with the RX Vega 64. Gaming is one of the main eGPU beneficiaries, and the differences can be felt even now when using an eGPU with an external display.

Likewise, Metal performance is also starkly improved. Obviously, the feeble Intel Iris Graphics inside of the 13-inch MacBook Pro is walloped by the RX580. The jump between the RX 580 and the Vega 64 is less significant, but still noteworthy. Either way, you stand to benefit from an external GPU.

Unfortunately, Final Cut Pro X remains unable to take advantage of eGPUs in any noteworthy way. I was hoping that the just-released Final Cut Pro 10.4.1 would include enhancements for eGPU support given the proximity of the release with macOS 10.13.4, but alas there appears to be no such support just yet. 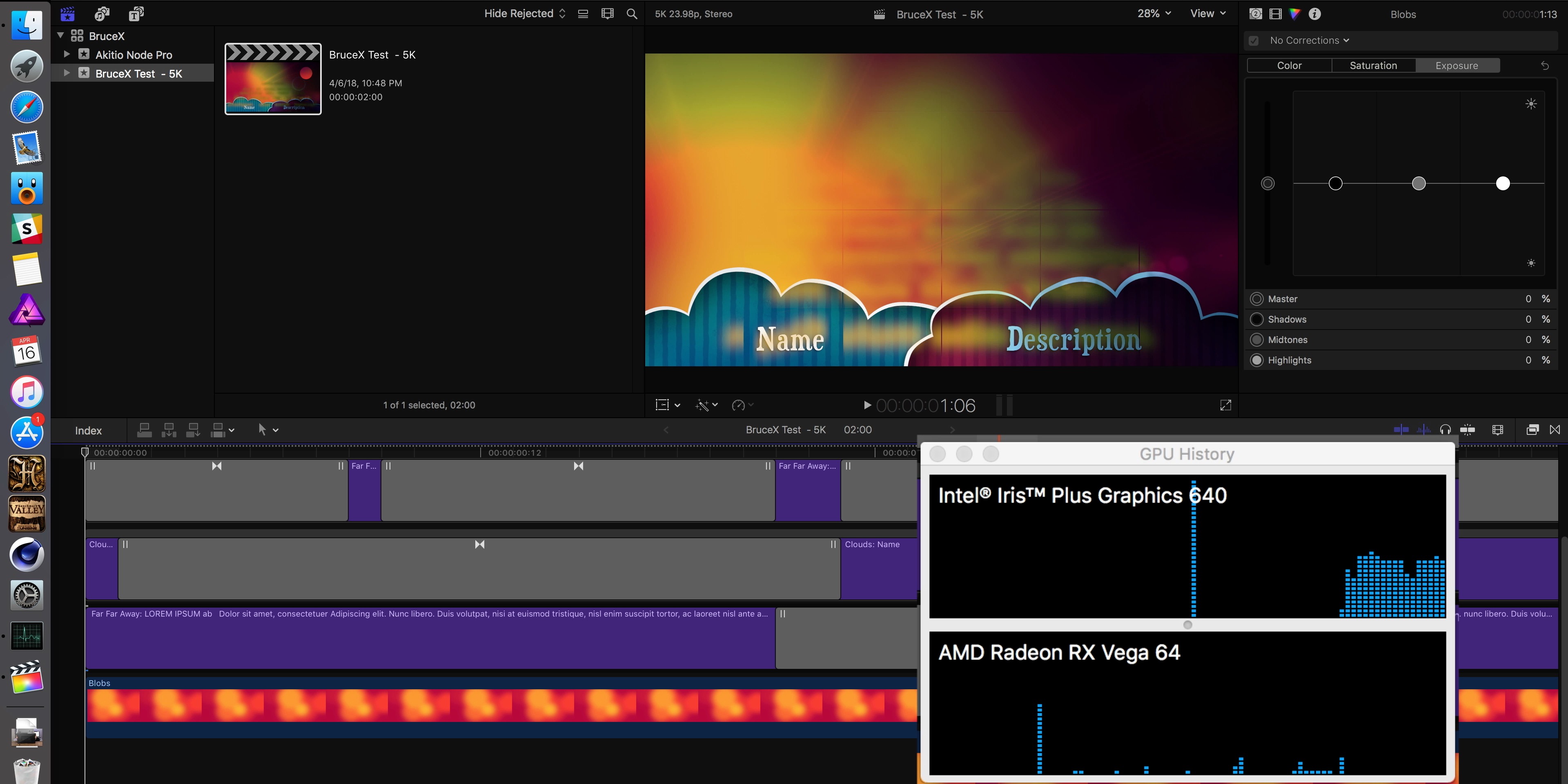 Sadly, a BruceX benchmark in Final Cut Pro X shows no reliance on the eGPU

It’s unfortunate, because Final Cut Pro X users should arguably be the primary target for eGPU setups, given that macOS isn’t a traditional gaming platform like Windows is. The good news is that the performance increases are there, so in theory it would only take a software update to take advantage of one or more eGPUs in Final Cut Pro X.

About those insane GPU Prices

The biggest barrier to entry for new eGPU users isn’t the eGPU chassis itself, it’s the GPU. GPU prices have skyrocketed since I first started covering external GPUs for 9to5Mac. Back then you could score an RX580 for a lot less than you could now, and the AMD RX Vega 64 has nearly doubled in price since I got it.

With current prices considered, it’s hard to recommend an ideal eGPU setup, because the investment just doesn’t match the return on investment in my opinion. Hopefully GPU prices will come back down to earth soon, which would make an eGPU configuration much easier to recommend. 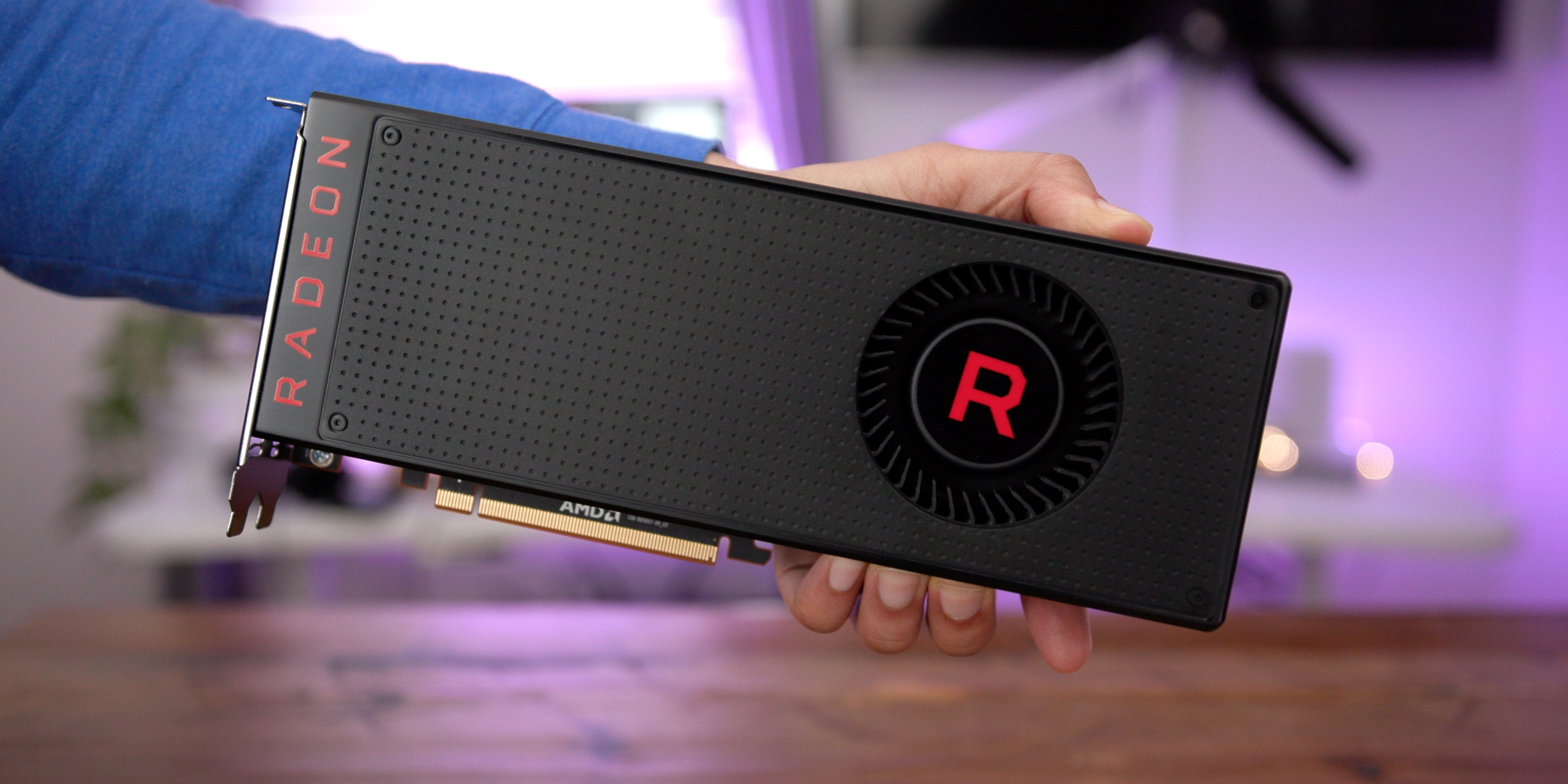 There’s also the issue of compatibility. Though these issues are no fault of Apple partner Sonnet, Nvidia GPUs are not supported at all, and Apple also notes that it doesn’t support eGPUs in Boot Camp for those wishing to run Windows. Both of these issues are big deals for potential eGPU users, and particularly make it hard on gamers.

Sadly Nvidia cards and Boot Camp are not officially supported

While gaming performance on Mac is improved with an eGPU, as you can see from the OpenGL benchmarks listed above, software like Final Cut Pro X will need to be updated before we see any performance improvements from it. You’ll have to determine if an eGPU investment is the right thing considering the current early state of affairs.

If you’re going to invest in an eGPU, then Sonnet’s eGFX Breakaway Box 650W is the safest bet. It’s definitely not the prettiest, nor the most well-put-together external graphics chassis, but it has three major things going for it: a beefy power supply that can drive the most power-hungry cards, 87W of power delivery for full speed 15-inch MacBook Pro charging, and an Apple recommendation.

You can purchase Sonnet’s high-end eGPU chassis right now on Amazon. Sonnet is also bundling its 650W with an RX Vega 64, which turns out to be a pretty good deal considering the prices of both items individually.

What are your thoughts on the Sonnet eGFX Breakaway Box 650W? Share your comments and opinions down below.