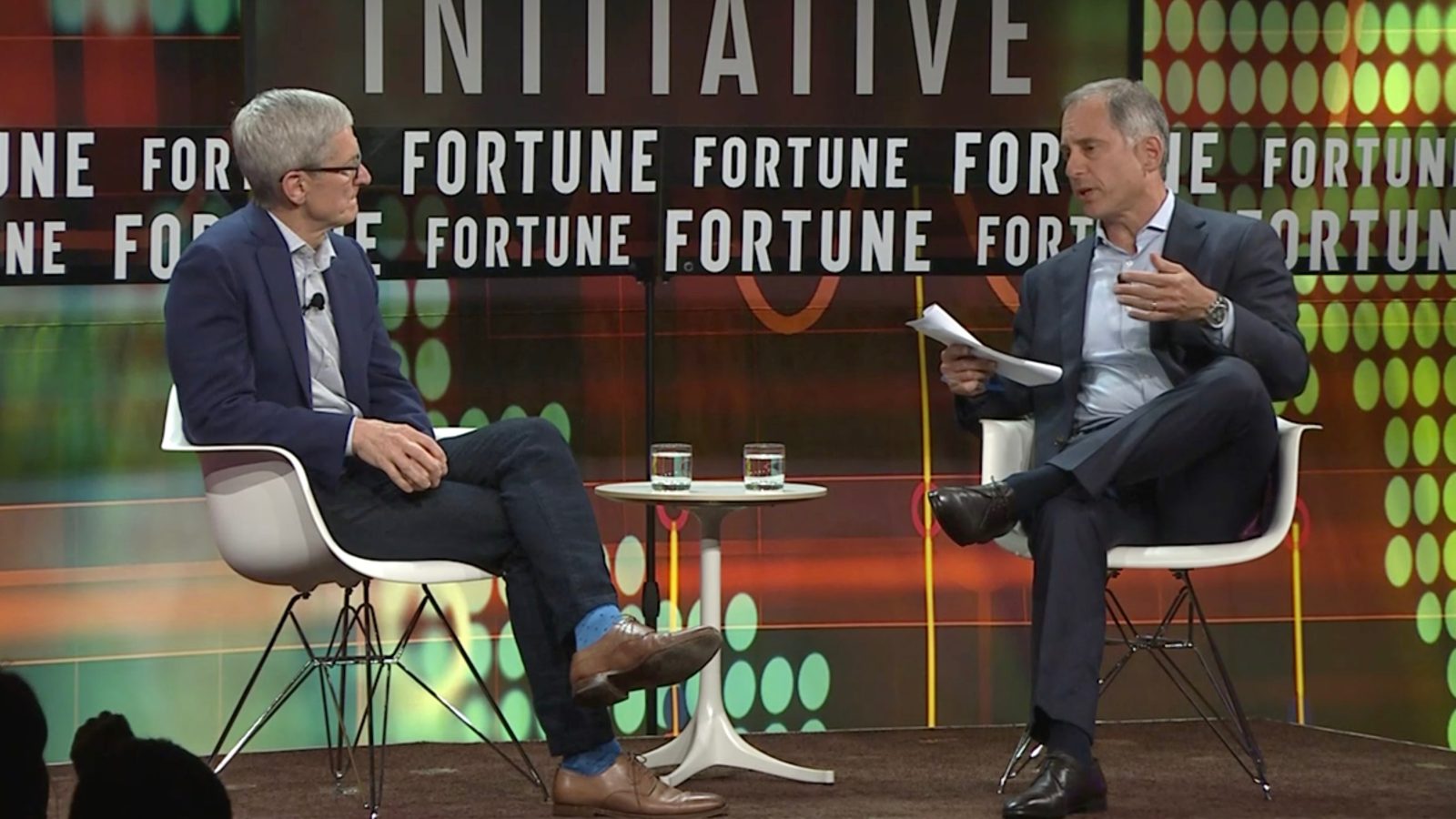 Regarding Apple’s involvement in social issues, Cook explained that he only voices his opinion when it’s something that Apple has knowledge it can bring to the subject. For instance, he touted the number of immigrants and the people on DACA at Apple as its basis for consistently talking about the need for immigration reform.

Cook also said that companies are a collection of people, and therefore by extension should have values. When pressed by Lashinsky about people who say companies should focus purely on commercial things, Cook said that’s not something he believes.

“For Apple, we’ve always been about changing the world. It became clear to me some number of years ago that you don’t do that by staying quiet on things that matter. For us, that’s been the driving issue.

There’s no formula for when you speak and when you don’t. The way I think about it is if it’s something that Apple has a special expertise on. I don’t want Apple to be another talking head. We should only speak when we have certain knowledge to bring to the subject. Do we have a right to talk about this issue? Do we have a standing?

We have a lot of immigrants that work at Apple. We have first first-generation, and at some point we’re all immigrants. If you look at the number of people we have on DACA, we have over 300 folks. I want to stand up for them. We have several thousand people who are part of our team that are on H1Bs and caught in the green card backlog.

This gives us both a perspective to share about the importance of having different points of view when you’re running a global company with global customers.”

Ultimately, Cook said that it’s easy to jump to the numbers when it comes to immigration, but what’s important to remember is that the people facing these issues are real people with real feelings:

To me, people quickly get to numbers. There are real people behind this with real feelings and they’re a core part of the United States. I think we do have a significant standing there. The diversity of our company, where it is never enough and you can never achieve the end here, if you do your kidding yourself. We have a lot of different people from a lot of different places. We are accepting of people from everywhere.

Ultimately, that is what human rights is about. It’s about treating people with dignity and respect. These are topics we think we can add something to. We don’t get into politics with any of this. We stick to policy: how are people treated, what is the immigration policy. These are things that we stick to. We work with people from both parties and no parties. At some points, one party will like what we do, other times the other one will.”

Lashinsky then asked Cook about his comments last week on the separation of families at the border. At the time, Cook called such separations “inhumane” and “heartbreaking.”

To Lashinsky, the Apple CEO said that he simply said what he thought and didn’t try to do the “normal CEO pivot.” Cook said that he likens the situation to those who originally came to the country as part of the DACA program.

“I said what I thought. I guess I could have taken the normal CEO pivot, which I’m not particularly good at. If you think about the folks here on DACA, they were very much in this same situation. Somebody brought them, whoever brought them might have been illegal at the time. Dial back to this situation and think, would you want those two separated? Do this make any sense?

I look at that and I think this is square in the dignity and the respect area. I felt we needed to say something.”

Cook was sure to point out that Apple sticks to policy and adheres to its own values to avoid joining the “appalling silence of the good people category.” He said Apple does not put money into politics and that he strongly disagrees with the concept of Super PACs in general:

“We stick to the policy. I think if you do that, most people will respect that. Even if people disagree, they will respect what you’re doing.

I think you ask yourself is it a value of your company. If something happens that isn’t consistent with your company’s values, I think you need to speak. If you don’t, then you’re in the appalling silence of the good people category. And this is something I’ve never wanted to be apart of.

Lashinsky then asked Cook about Apple’s commitment to privacy, to which he again criticized the companies that build a “detailed profile of people.”

We felt strongly about privacy when no one cares. We didn’t wake up one morning with the media focusing on privacy and say, ‘oh, let’s do that.’ We can see that the building of a detailed profile of people would likely result in significant harm over time. It could be used for too many nefarious things.

Earlier today, Apple announced that Apple News will feature a dedicated section for the 2018 U.S. midterm elections. The company touted that it would be ‘fact-based’ content. Speaking to Lashinsky, Cook explained that Apple has always focused on curation and that it was time for the company to extend that to news coverage.

Cook criticized certain news coverage that tries to “strictly enrage people.” He also noted that if people disagree with the content that is featured in Apple News, they have a variety of other sources at their disposal.

“If you start at the macro level, we’ve always believed in curation. The App Store has been curated since 2008. We felt a duty to review apps and make sure they did what they said they did. Since the early days, we were criticized, but we felt like this it was our store and it says something about us.

We’ve taken that same view to News because we saw that news was kind of going a little crazy. It doesn’t mean that people have to use only Apple News. You can go anywhere you want to. But for Apple News, we felt the top stories should be selected by a human. Not to be political at all or check the views, but to make sure you’re not picking content strictly to enrage people.”

The Apple CEO also touted that Apple will have a handful of people writing exclusive content for Apple News:

“We’re going to pick from a wide variety of outlets, viewed from conservative to liberal to in between, if there is such a thing anymore. We’re going to have different people who are going to be writing exclusively for this. I think we can make a contribution here.

I’m not being critical of people who do something different, but Apple has always stood for curation. We’ve always believed in quality, not quantity. Whether you think about our products, or everything. If people like it, they can go to that section of Apple News, then they can get news from a whole variety of different sources.”

The conversation then turned to Apple’s focus on digital health and technology addiction in iOS 12, with Cook explaining that it became clear to the company that some people were spending too much time on their devices. He added that it has never been Apple’s goal for people to overuse its products:

“I think it’s become clear to all of us that some of us are spending too much time on our devices. What we’ve tried to do is think through how we can help with that. We’ve never wanted people to overuse our products. We want people to be empowered and be able to do things they couldn’t otherwise do.”

With features like Screen Time, Cook said it was important to give users the ability to cater to their specific needs as everyone uses their devices for different tasks:

As we fought through this, we thought this is not an area where you can say 30 minutes a day is good for everybody like with exercise. Some people use their phone or iPad to read books, or to listen to music in the background, or as a TV. There’s such a wide variety of cases, so what we’re doing is you can get a report showing where you’re spending your time.

Personally, Cook said that the new iOS 12 features have pushed him to monitor the notifications he was getting and significantly cut back:

Tim Cook also touched on Apple’s long-term focus, saying that it doesn’t focus on making decisions for short-term investors and that almost all of its decisions are multi-year. He also noted that if he were king for a day, he would get rid of the 90-day earnings release requirement altogether:

“You have to have a top-level management team that is willing to put aside the stock price. Because if you make a decision based on short-term investors, you’re guaranteed to make bad decisions. It will set the tone in the organization.

The investments we make are all multi-year. They’re certainly not conducive to a 90-day cycle. If I were king for a day, 90-day earnings would be flushed. What you have to do is look yourself in the mirror and say, “I’m going to take the heat.” But if you’re short-term investors, I would really advise you not to get in.”

Things wrapped up with Lashinsky asking Cook how long he has left as Apple CEO as he approaches his seven-year anniversary at the helm. “It’s the privilege of a lifetime to be at Apple. Hopefully I’ve got some good time left,” Cook said.

What do you think of Cook’s comments? Do you agree with his philosophy behind being involved in social issues? Let us know (in a civil manner) down in the comments.