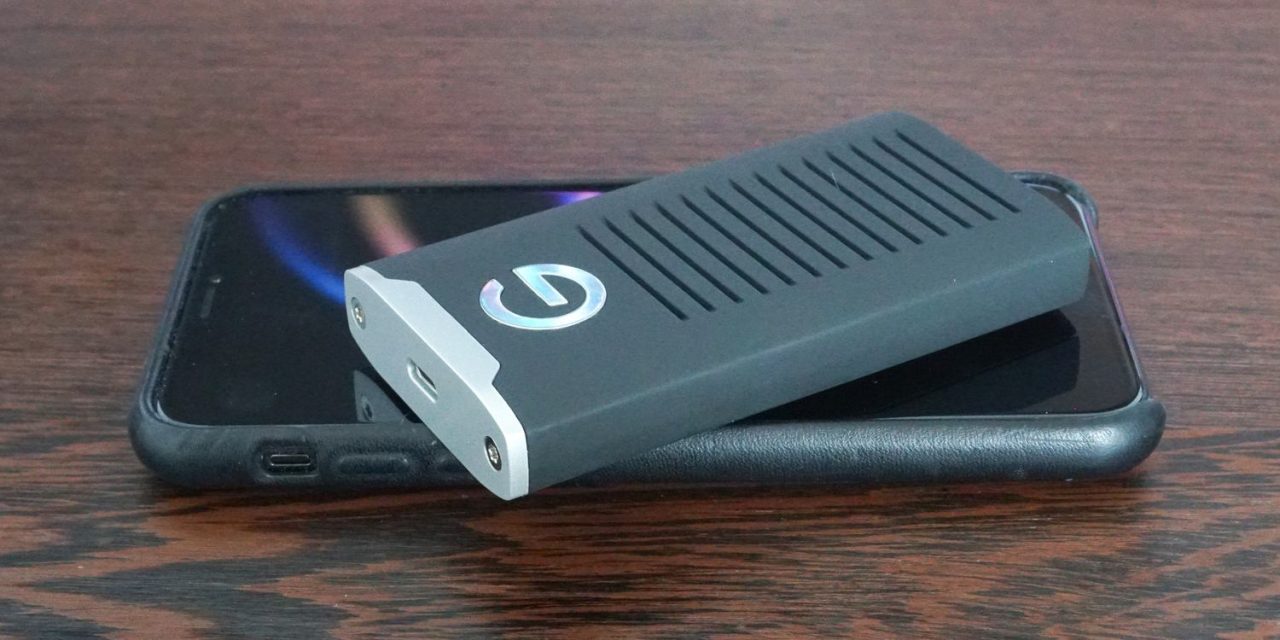 It doesn’t seem that long since we had a choice to make when it came to external drives: we could opt for spinning metal drives if we wanted high capacities at affordable prices, or SSD if we wanted fast transfer speeds, were willing to compromise on capacity and were prepared to pay the substantial premium. But that’s beginning to change …

We’re seeing SSD capacities rise and prices fall, and G-Technology is now taking available of the far greater robustness of a solid-state drive to offer a rugged drive that can handle almost anything you can throw at it.

I took the 500GB model for a spin, which costs $165. Stepping up to the 1TB drive comes in at $299. Unfortunately, the disproportionate premium on higher capacities still applies, so it would cost a whopping $669 for the largest 2TB model.

The R-Series drives are really pocketable, measuring less than four inches by two inches, and just over half an inch thick. As you can see from the photo above, that’s considerably smaller than my iPhone X, though about twice as thick.

Portability is also helped by the included short cables, one each for USB-C and USB-A. The connector at the drive end is USB-C.

The casing is black plastic, but don’t be fooled by that – this is a tough drive. Inside the outer casing is an inner one, in a vibrant blue.

The drive is protected against vibration, and offers three specific ruggedness ratings:

So you could take this drive hiking, drop it into a stream and step on it, and it should still survive.

IP67 waterproofing means that it’s 100% dust-tight, and can be fully immersed in water up to 1 metre deep for up to 30 minutes.

I put it through a few unscientific tests. I dropped it from chest height onto a hard floor. I stepped on it. And I immersed it in a sink full of water. It shrugged off each of these tests, and didn’t even show any marks afterwards. G-Technology also seems pretty confident: you get a 5-year warranty with the drive.

Executive summary: if you’re a video pro or dealing in very large files, you may want a faster drive, but this is good enough for most applications.

Ordinary consumers are not going to be buying 2TB external SSDs just yet – that pricing is still into professional use territory, and the R-Series is no exception at $699.

But 500GB portable drives are still plenty useful, and the $165 price-tag isn’t that much higher than you’d have paid for a spinning metal drive of the same capacity a few years back. 1TB for $299 is also not a crazy price.

Of course, spinning metal drives are as cheap as chips these days, so that will always be the way to go if price per GB is your primary concern. But personally, for things like travel, where I want to backup photos and video footage, I appreciate SSDs for their speed, portability and robustness. And where the latter is concerned, the R-Series is a worry-free drive.

I took it with me on a trip to San Francisco and Yosemite, and it essentially took up no space in my camera bag, enabling me to create immediate backups, and also have it on me all the time – so if my laptop had been stolen from my hotel, I wouldn’t have lost any photos. That, plus not having to worry about it getting wet or being dropped, is very worthwhile peace of mind.