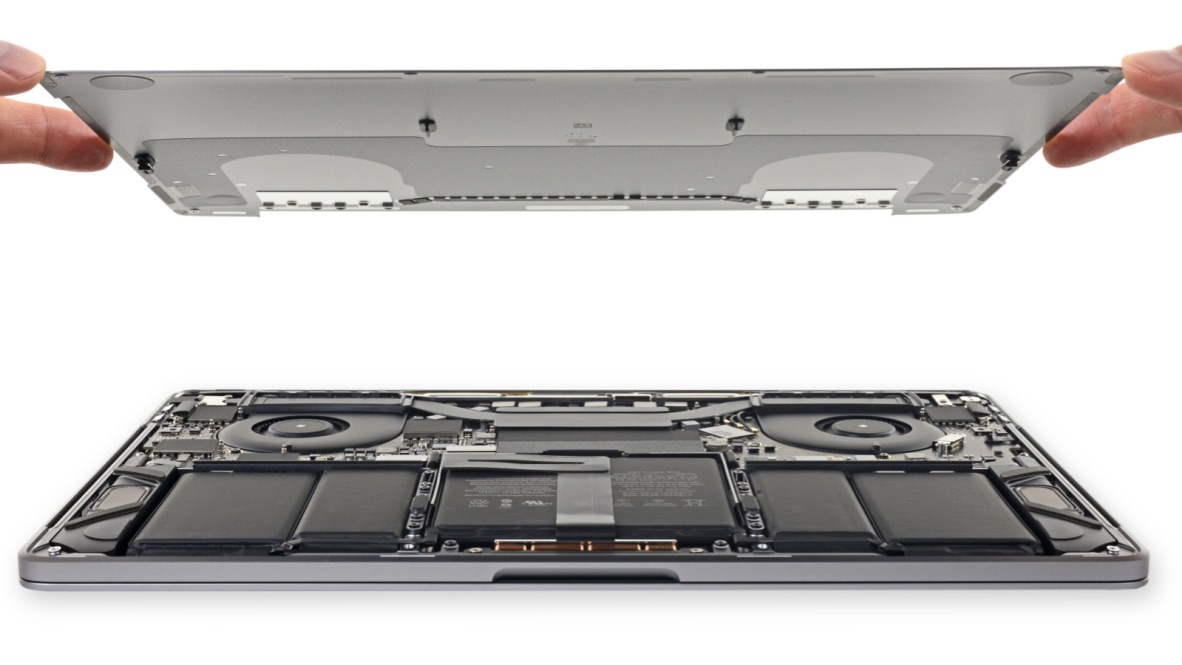 Though iFixit offered us a brief glimpse at the new MacBook Pro keyboard last week, the site is back today with its full teardown of the 2018 13-inch MacBook Pro with Touch Bar. While the internals of the new MacBook Pro look similar to last year’s on the surface, iFixit says there are a few things worth noting…

First and foremost, iFixit highlights the new MacBook Pro’s bigger battery. While Apple isn’t expecting any improvement in battery life, the battery itself is now arrayed into six cells instead of five – a notable feat considering the actual weight of the MacBook Pro has not changed:

At 58.0 Wh, this battery has gotten a significant boost over the 49.2 Wh unit we found in our original 13″ Touch Bar teardown. Turns out that extra ‘oomph’ comes from a slightly bigger battery—arrayed into six cells this time, instead of five. It’s also heavier, weighing in at in at 232.7 g, versus the old battery’s 196.7 g.

And yet this MacBook Pro’s total weight hasn’t changed one iota. We’re not sure which parts of this device have been on a diet, but it does look like Apple shaved some mass off the top case.

Through the teardown, we can also see that Apple has made the speakers on the device a bit bigger, with a comparison to last year’s model showing that the new ones are “longer and narrower, bumping right up against the logic board.”

iFixit notes that the “lone piece of happy repair news” is the trackpad, which is replaceable by simply undoing a few Torx screws.

Interestingly, the teardown also notes that the data recovery port present on last year’s model is nowhere to be found this year, leaving questions as to how Apple would recover data from a machine that has a non-removable SSD.

As for the keyboard, iFixit teases that it has a “deeper dive on the keyboard situation coming next week,” but notes that “the added quietness seems a bit underwhelming to our ears.”

Apple was careful to mention its latest third-gen keyboard in its press release. The added quietness seems a bit underwhelming to our ears, and we suspect there’s something more going on.

After three years of key-cap removal, we’re able to pop this lid open without damaging the delicate clips, and boy are we rewarded.

The teardown also provides a close look at the slew of chips packed into the MacBook Pro, including the new Intel processors, and Apple’s custom T2 chip.

Last but not least, iFixit dug into the USB-C power adapter – noting that it features a different model number than previous power adapters. The differences appear to be in the form of some additional shielding and impact-resistant foam rubber.

It’s terms of repairability, iFixit awards the 2018 MacBook Pro with Touch Bar a 1/10 – which shouldn’t come as too big of a surprise as Apple laptops have never been viewed fondly by the folks at iFixit.