Kantar: iPhone makes up 8 out of the 10 best-selling smartphones in Q2 as iOS gains on Android 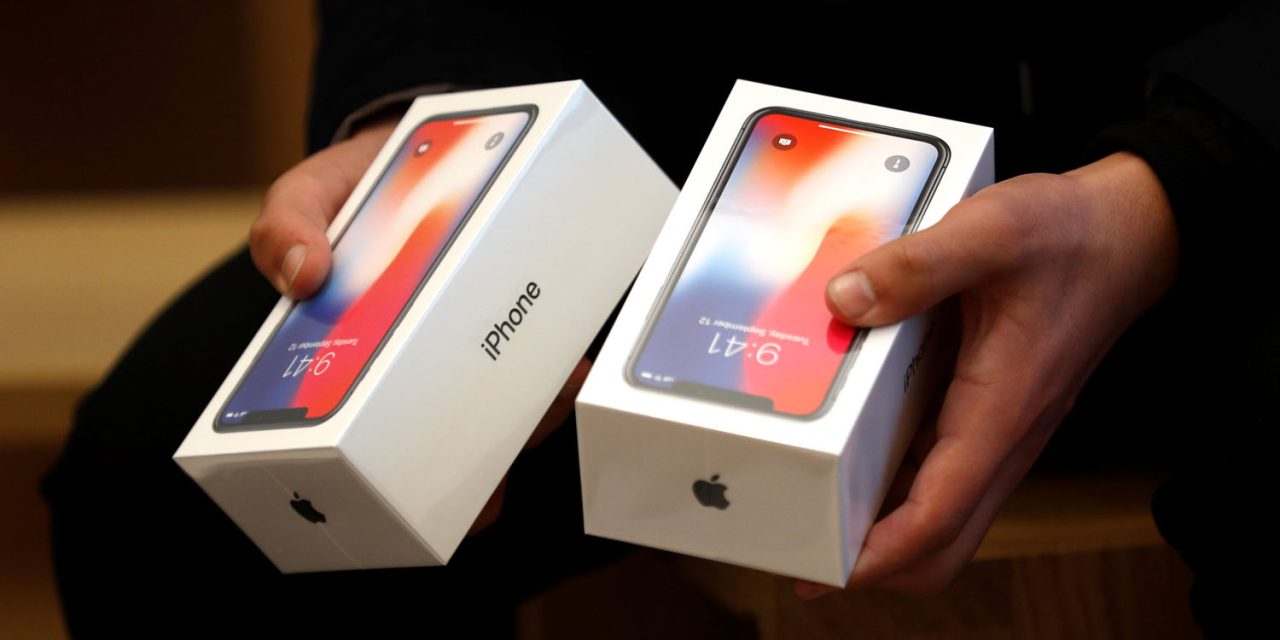 Kantar is out today with its latest research covering the smartphone industry during the second quarter of 2018. According to the data, iOS saw a nearly 6 percent increase in market share thanks to continued strong sales of the iPhone 8 and iPhone X...

In the United States, Apple’s smartphone marketshare was up 5.9 percent, giving the company a 38.7 percent share of the market. The iPhone 8 and iPhone 8 Plus led the way, together combining to lead Apple’s sales and account for nearly one in five smartphones sold. The iPhone X, meanwhile, was the fourth best selling smartphone in the quarter:

Apple’s iOS performed best in the USA, where a stellar three months helped shift market share up 5.9 percentage points to 38.7%.  The iPhone 8 and iPhone 8 Plus lead Apple’s sales, together accounting for nearly one in five smartphones sold, while iPhone X was the fourth best-selling device during the period.  Samsung and LG have both felt the heat from Apple’s performance, seeing share fall over the year.

All in all, iPhone accounted for eight out of the ten best-selling smartphones in the past three months in the United States. Kantar attributes this success to the depth of the iPhone lineup, ranging from the low-end with iPhone SE all the way to the more expensive iPhone X.

Android was at the expense of Apple’s success during Q2, with its marketshare in the United States slipping from 65.5 percent to 61.1 percent.

In China, meanwhile, Android account for 80.4 percent of the market share during Q2, but iPhone X represents the top selling device. According to Kantar, iPhone X made up 5.3 percent of all handsets sold in China. This means iPhone X has now been the best-selling smartphone in China every month since its release in November. 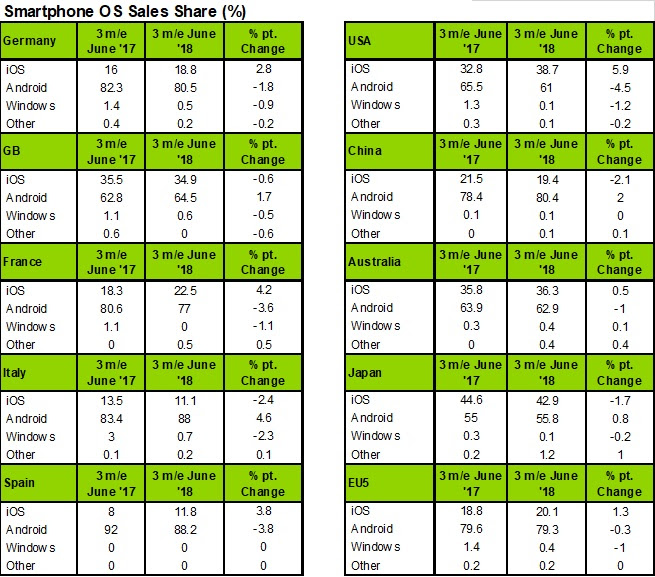 Kantar’s full release is below:

The latest smartphone OS data from Kantar Worldpanel ComTech reveals a mixed performance for Android in the three months ending June 2018. Share across the big five European markets fell by 0.3 percentage points though Android remains dominant, holding 79.3% of the market. Worldwide, Android grew in Great Britain, Italy, Japan and China, with the improved performance of Huawei a major factor in this success.

Dominic Sunnebo, Global Director for Kantar Worldpanel ComTech comments, “Huawei has been making rapid progress in Europe over the past three years, but performance in Great Britain has been lacklustre. To counter this the manufacturer has taken a dual-pronged approach, attacking the low end of the market with its budget P Smart model and the top end with the well-reviewed P20 Pro. The P20 flagship series has made a big impact in Britain, helping to lift Huawei’s share from only 2.7% a year ago to 13.7% in the past three months, and a successful partnership with Argos has helped both sides become major players in the lucrative British smartphone market.”

Apple’s iOS performed best in the USA, where a stellar three months helped shift market share up 5.9 percentage points to 38.7%. The iPhone 8 and iPhone 8 Plus lead Apple’s sales, together accounting for nearly one in five smartphones sold, while iPhone X was the fourth best-selling device during the period. Samsung and LG have both felt the heat from Apple’s performance, seeing share fall over the year.

Dominic Sunnebo continues, “Apple continues to wield huge power in the US market, with iPhone models making up eight out of the ten best-selling models in the past three months. Apple currently enjoys unprecedented depth across the smartphone price spectrum, ranging from the iPhone SE to the $1,000 iPhone X; resulting in continued growth and hitting Samsung and LG hard. While Samsung is well represented at the premium end of the market with its S9 and Note series, and its budget orientated J series helps compete against LG, lack of depth in the mid-high tier is allowing Apple to find a new avenue for growth.”

In China Android claimed 80.4% share in the three months to June 2018 – up by 2.0 percentage points. However, iPhone X continues to be the top selling device, making up 5.3% of all handsets sold – it has now been the best-selling model in China every month since its release in November 2017. The major brands in China are continuing to squeeze out challengers, with Huawei, Apple, Xiaomi, and BBK Group (Oppo/Vivo) accounting for 87% of sales in the past three months, up from 80% a year ago.

Dominic Sunnebo comments, “As smartphone penetration exceeds 90% in urban China and sales markedly slow, there are no easy wins left in the world’s largest smartphone market. The power and marketing budgets of the big four players in China are leaving less room for challengers to be heard – if they want to make an impact it’s imperative they focus on targeting specific consumer segments, as a scattergun approach will not cut through.”