5G: What to know, why you should be excited, and how it will impact you

5G is coming soon. And although it seems pretty clear Apple is going to skip the next-gen wireless service in the 2019 iPhone, most Android manufacturers have made one thing certain: they’ll have at least one 5G offering as early as summer 2019.

We’ve been hearing about how 5G is bringing the next-generation of wireless service for years now. However, with casual internet browsing already at incredible speeds, paired with healthy download times on even the largest 4K movie and TV files, it seems ambiguous as to how impactful 5G will be on our day-to-day lives.

Let’s dive in and breakdown why 5G is going to be critically important in the next decade.

What 5G can do for you

First and foremost, 5G is obviously about faster speeds. But why exactly this matters is critical to understanding the baseline difference between 4G LTE and 5G NR. NR is the new wireless standard on which all carriers will operate their network — we’ll dive into this a bit later.

At full signal, 4G LTE can bring some seriously impressive speeds to any connected device. Even a 4K TV show can be streamed without too much buffering. However, drop the signal down to a bar or two and your results start to vary dramatically. Music streaming is largely seamless on 4G, where even full albums can be played within a few seconds at just one bar of LTE. This same responsiveness will come to entire 4K video libraries with 5G.

On the other hand, a full 5G signal could in-theory provide multi-gigabit broadband. Theoretical numbers are rarely met in real-world use, but to suggest average metropolitan 5G speeds are at least consistently above 750 Mbps doesn’t seem like a far stretch.

Strictly speaking from within the United States, this is a win for both urban dwellers to even the most rural locations. For those of you in LA or NY, you’ll get to experience a new generation of internet services previously deemed too unstable under current WiFi and 4G standards. For those in more secluded sections of the country, even one bar of 5G service could provide you with faster internet than you’ve ever had access to before.

Remember all those video game streaming services where you could harness the power of a high-end GPU via the cloud? They still exist, but they won’t take off until 5G becomes widespread.

Currently, low gigabit internet availability paired with still high latency speeds prevent cloud based gaming from being a worthwhile, enjoyable experience. However, perhaps the most promising is NVIDIA’s GeForce Now, which still requires an invite to participate in the beta. When 5G starts rolling out though, we’ll be close to a public release. That’ll be when even the lowest paying connected costumers should have internet speeds comparable to today’s top-end LTE performance with significantly lower latency.

Wave modulations are not created equal

But when it comes to signal strength? Well that’s a different story entirely…

A hypothetical breakdown of signal strength to network speeds, 4G versus 5G.

5G utilizes previously inaccessible high-frequency millimeter radio waves between 30 and 300 GHz. Advertised and marketed as “mmWave”, they have remained dormant due to high costs and strict government regulation. Millimeter waves are grouped tighter, at a significantly more compact capacity than the standard sub-5 GHz radio waves used currently. Although these new network waves allow for tremendous speed increases, higher frequencies have greater difficulty with object penetration. It’s why 2.4 GHz WiFi is best for a home with thick cement walls, while 5 GHz is ideal for achieving peak speeds in an optimal network environment.

As a result, the 5G infrastructure is going to be a little more complex than 4Gs to enable and distribute. Signal boosters and specially designed equipment will be required at public venues such as stadiums, malls, theaters and more. While it may seem like a downer at first, understand that when the full infrastructure is developed, these side effects will be mostly mitigated. 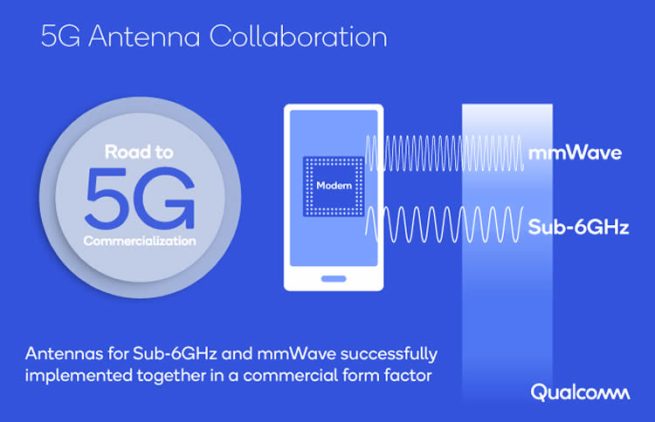 So what does this mean for the future of WiFi? 5G will probably mark the end of traditional WiFi versus cellular signal connections. All devices will run on the 5G NR standard. This should open up a new-era of truly “always connected” mobile devices. Rather than hunt for WiFi on your iPad and an LTE signal for your iPhone, you’ll simply seek 5G. Though the story spans much farther than just iPads and smartphones. Devices will simply remain connected regardless of location, which will usher in a generations of laptops with 5G. 5G Chromebooks and MacBooks anyone?

As for what exactly NR stands for? Nothing too fancy, simply “new radio”. Primarily, the acronym’s function is to represent the universality of the “new” network standard across all different carriers and service provides

Unlike the early days of 4G, where LTE, WiMAX and HSPA+ left customers in a confused mess, 5G will all run upon this “NR” standard. In fact, you might remember T-Mobile CEO John Legere getting into a bit of a Twitter rage over Verizon’s advertisement of “5G” home internet service for not using the agreed upon industry standard and having awfully strict requirements.

I cannot begin to explain how important 5G is going to be for this country, so I have to say congrats to Verizon on delivering its 5G* Home Service today. It doesn’t use global industry standards or cover whole blocks and will never scale… but hey, it is first, right?! 🤷‍♂️

Even Verizon admitted they would be switching these early customers over to the NR standard “soon”, when the required home equipment was ready for consumer use.

Ultimately, 5G will open up an array of internet possibilities currently impossible with today’s network standards. Medical surgeries preformed over the internet, AAA games streamed at maximum graphic capacity to your Google Chromebook, fully wireless VR and AR streamed to a headset… The possibilities with 5G are just speculation today, but the potential for fruition is now more real than ever.

Qualcomm estimates “typical speeds” will fall in the 1.4 Gbps range, as the NR standard technically calls for peak speeds of 20 Gbps. Here’s Qualcomm breaking down some potential numbers customers will experience.

Beyond network capacity improvements, there are significant gains for 5G NR capable devices when compared with LTE devices, including:

Now, the final question that remains is when exactly you’ll see the network coming to your area. There’s only two countries in the race to deliver widespread 5G first: the United States and China.

The latter has been all-systems go with their Made in China 2025 strategic plan, set to prioritize tech sector growth within the nation drastically over the next ten years (first proposed in 2015). As a result, China hopes they can push their state-funded 5G infrastructure to a global best faster than any other nation. In the US, private companies will of course handle the estimated $200 billion per year rollout costs.

Ultimately, people just want to know when they can purchase their first 5G device. While a better question might be when you can purchase a good 5G device, that still remains unknown. At the very least, you’ll see the first Android phones with Qualcomm’s new 5G capable 855 SoC in 2019 from Samsung and OnePlus.

What other questions do you have regarding the future of 5G and what it means to you? Let’s have a discussion in the comments and figure out this wireless future together.