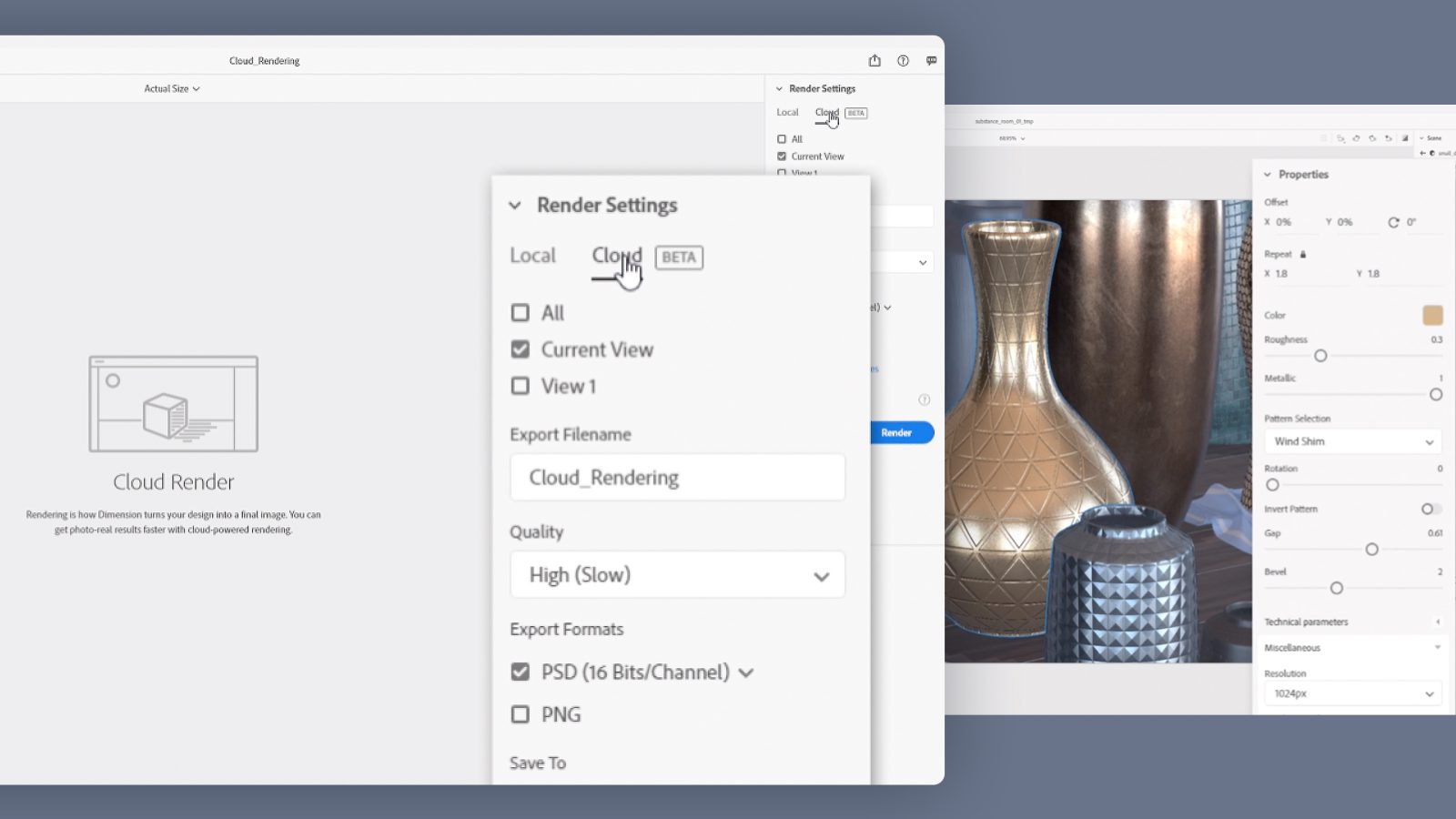 Headlining Dimension’s update is Cloud Rendering, a new beta service that will speed up the workflows of pro users while allowing hobbyists and those with older and less performant hardware to work efficiently. Cloud Rendering sends your completed 3D scenes to Adobe’s servers for rendering rather than taxing the resources of your own Mac. The results of your render are streamed back in real-time so you can monitor its progress and download the final image.

During the service’s beta period, Creative Cloud users will get 15 free render credits per month. Each render requires 1-3 credits to complete based on the quality settings you choose. Paywalling Cloud Rendering might put the service out of reach of the users who could benefit from it the most, but the process is computationally intensive and may not be feasible to offer for free. Adobe hasn’t announced final pricing or availability beyond the beta period.

Starting today, Dimension users can also import materials to their scenes in the .SBSAR format created with Substance Designer. Along with support for higher resolution placed graphics, 3D scenes should look more realistic. Graphics and colors can now be saved to your Creative Cloud Libraries. Images saved in Libraries are cloud-linked and will automatically update in Dimension when edited.

Designers may also be interested to learn that Adobe is partnering with 36 Days of Type to give away one-year Creative Cloud subscriptions and a feature on the 36 Days of Type Instagram account.

Starting April 4th and running through May 8th, designers across the world will share their daily creative interpretations of each letter in the alphabet and numerals 0 through 9. The project has been popular in the design community for the past few years, and art is shared on social media with the hashtag #36DaysofType.

This year, Adobe has gathered a panel of judges to vote on the “most innovative, creative and unique letterforms.” Six winners will receive the free Creative Cloud subscriptions. Details on how to enter or follow along are available on Adobe’s website.

An in-app service that automatically sends 3D scenes to the cloud, renders using our servers, and then streams the results to a user’s device so they can watch the progress and download the final image. This is aimed to free up computer resources in the process and render much faster than before. During this beta, all Creative Cloud users will get 15 free credits per month, with each render requiring 1-3 credits depending on the quality.

It’s now easier to scale objects in Dimension using units and size properties. Users will now be able to choose from several 3D units of measurement to use in their scenes.

Adobe has improved the process of placing graphics onto models in ways that will offer more control and higher quality results. Now, when a user places a graphic onto a model, it will maintain a higher resolution with less pixelation and higher visual fidelity, so a 3D scene will look even more realistic than before.

Dimension now supports the saving of both graphics and colors in CC Libraries, so any changes users make now save automatically for use on other Dimension projects and in other Adobe products. Additionally, now when an image is saved in CC Libraries, the image is a fully cloud-linked file, meaning if it is edited and saved in Photoshop or Illustrator, it will update automatically in Dimension. You’ll see the CC Libraries panel has also been updated to support custom grouping.