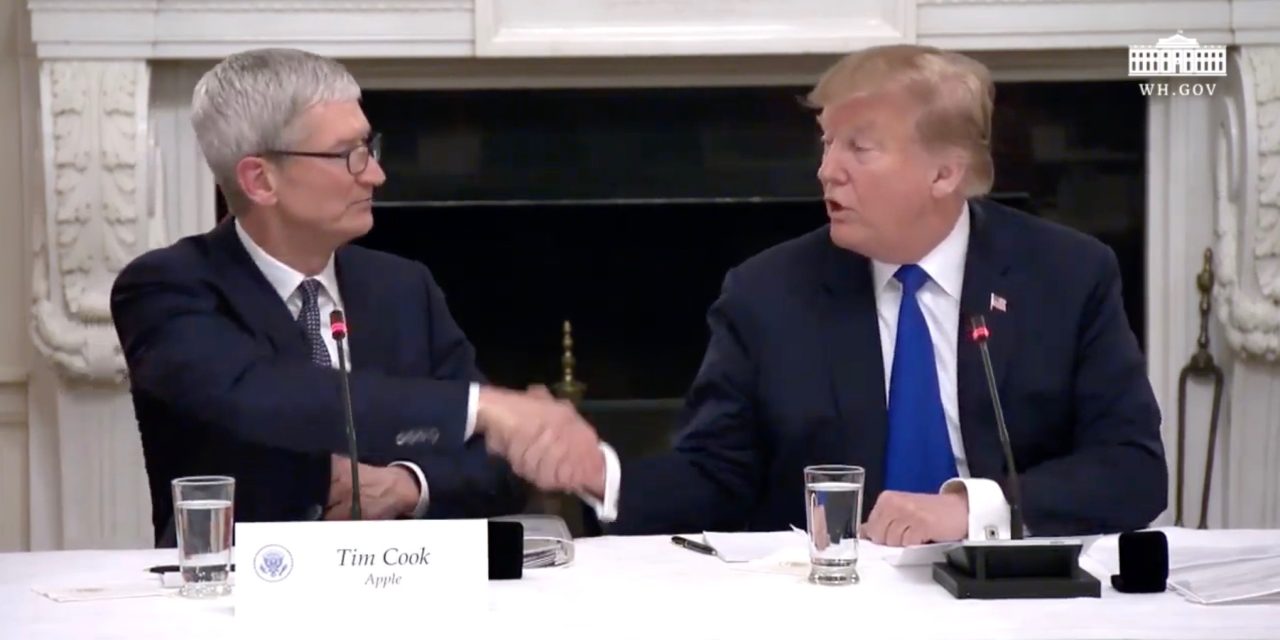 Apple CEO Tim Cook has taken a visible role in politics since the election of President Trump. Cook has met with and earned praise from Trump multiple times, while also criticizing his policies when necessary. A new report from the Wall Street Journal explores how Tim Cook balances his relationship with President Trump and Apple’s employees and interests.

The report details that at first, Apple executives were hesitant about a relationship with Trump over fears the president would criticize the company’s Chinese manufacturing and end-to-end encryption:

The month after his election, Mr. Trump summoned Mr. Cook to meet in New York. Apple executives debated skipping the summit, worried Mr. Trump would air grievances about manufacturing and Apple’s commitment to encrypted iPhones, according to a person familiar with the company. But people who knew Mr. Trump encouraged Mr. Cook to attend, this person said.

Mr. Cook spoke about Apple’s manufacturing practices, drawing a contrast between smartphone production and automobile manufacturing, according to these people. Most of the value in the iPhone came from the design and engineering, he said, and the Chinese workers who did the assembly received low wages, so how could those jobs be good for U.S. workers?

After that meeting, Cook worked to build an “unlikely” relationship with Trump and his family to “protect his company’s interests.”

To protect his company’s interests, people close to the company and administration said, the Apple CEO has cultivated a relationship with the president and his family, an unlikely alliance given their contrasting personalities and divergent views on many issues.

Cook has also developed a relationship with Jared Kushner and Ivanka Trump. Apple, or Cook himself, will often alert the White House before the company is about to challenge a policy publicly, such as immigration or other social issues, the report says.

Nearly 97% of Apple employee donations to candidates in the 2018 midterm elections went to Democrats, according to the Center for Responsive Politics, citing public disclosures. Yet employees haven’t publicly criticized Mr. Cook for engaging with the president. Mr. Cook has challenged the president on some social issues. His personal lobbying benefited the company on the tariff issue, and tax changes that led to employee bonuses.

Senator Mark Warner praised Cook for being willing to open up to Washington DC:

“There are a lot of folks in Silicon Valley who reek of disdainfulness for politics,” said Sen. Mark Warner (D., Va.), who regularly meets with Mr. Cook. “They often presume they’re much smarter than anyone in policy…Tim doesn’t have that approach. He actually listens.”

The impeachment inquiry into President Trump is “unlikely” to have an effect on the relationship, the report says. Instead, Cook will continue to engage on issues that pertain to Apple and avoid the political side of things:

The nascent impeachment inquiry is unlikely to have an immediate effect on the relationship, according to people close to Apple. Mr. Cook is expected to continue to engage on issues related to the company’s business while steering clear of politics and pushing back on social issues.

Notably, despite Cook’s relationship with the president and the rest of his administration, Apple’s lobbying spending continues to rank far below other Silicon Valley companies. Apple has spent $18 million on lobbying since 2017, which is far less than half of what Amazon and Alphabet have each spent.

Ultimately, the administration has come to “rely” on Cook for his insight into issues like trade and business:

Over time, the administration began to rely on Mr. Cook for insight into trade and business issues around the world, including in China, Brazil and Europe, former and current senior administration officials said.

The full report from the Wall Street Journal can be found here.