Creating a Mac mini video editing setup for under $2,000 [Video] 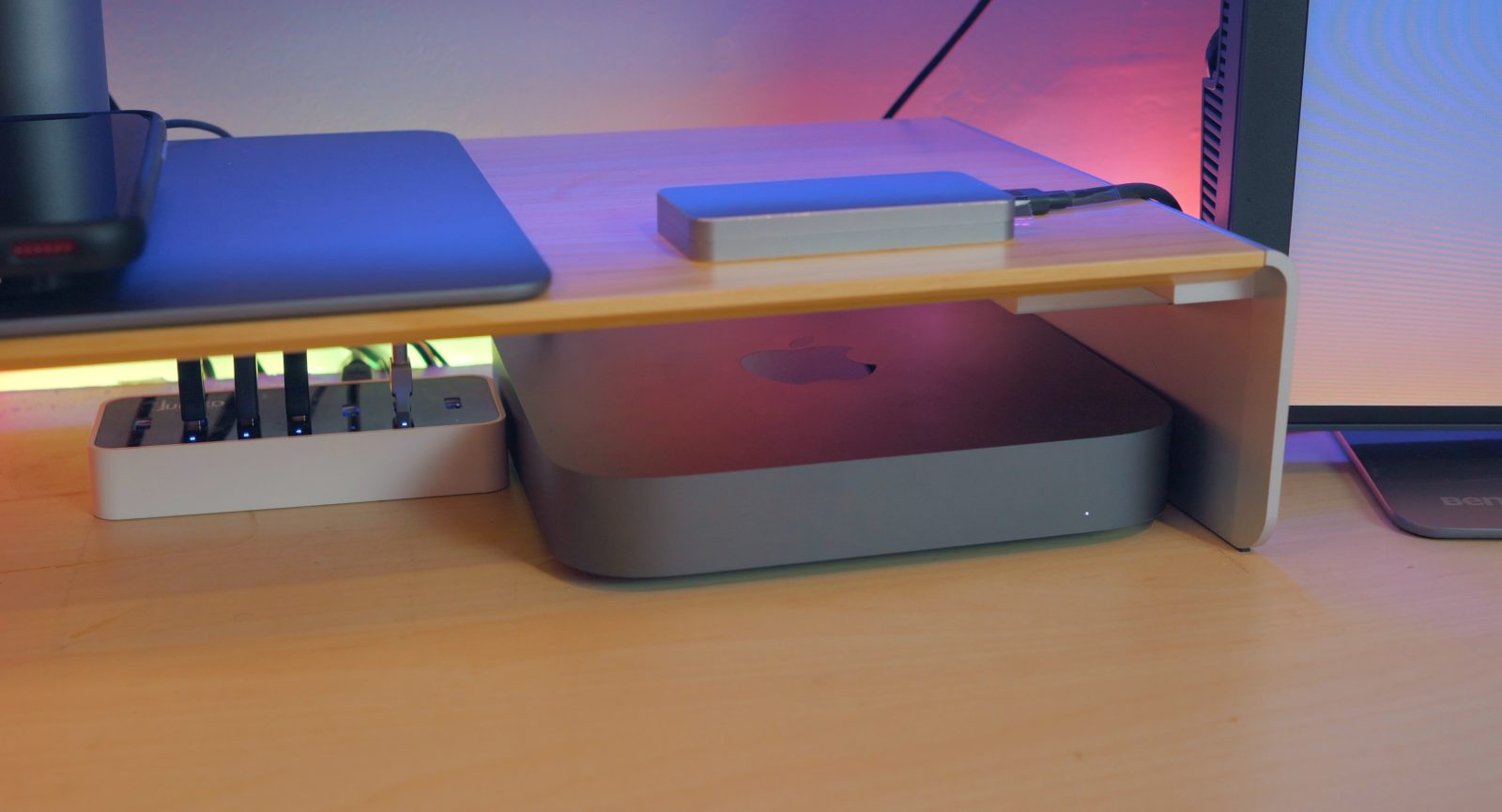 In recent months, I’ve been looking to upgrade my Final Cut Pro desktop editing rig. I wanted something that could last me at least the next two to three years and provide me with a smooth workflow; I also wanted to spend less than $2,000 total. If you’re in a similar predicament, then read further. For less than $2,000 I put together a Mac mini video editing setup that works great with Final Cut Pro X.

I went out and got 16GB of RAM from Kingston, a single DIMM stick cost me $70 and gave me a grand total of 20 gigs of RAM in the machine. Yes, I’m aware that 20 is a weird number, but for now, I’m just happy to have more than 8GB.

When the time comes, I can replace the 4GB module in there with another 16GB stick to get 32GB total. If you’re looking into upgrading the RAM in your Mini, Jeff did a great video doing a simple step-by-step installation tutorial. 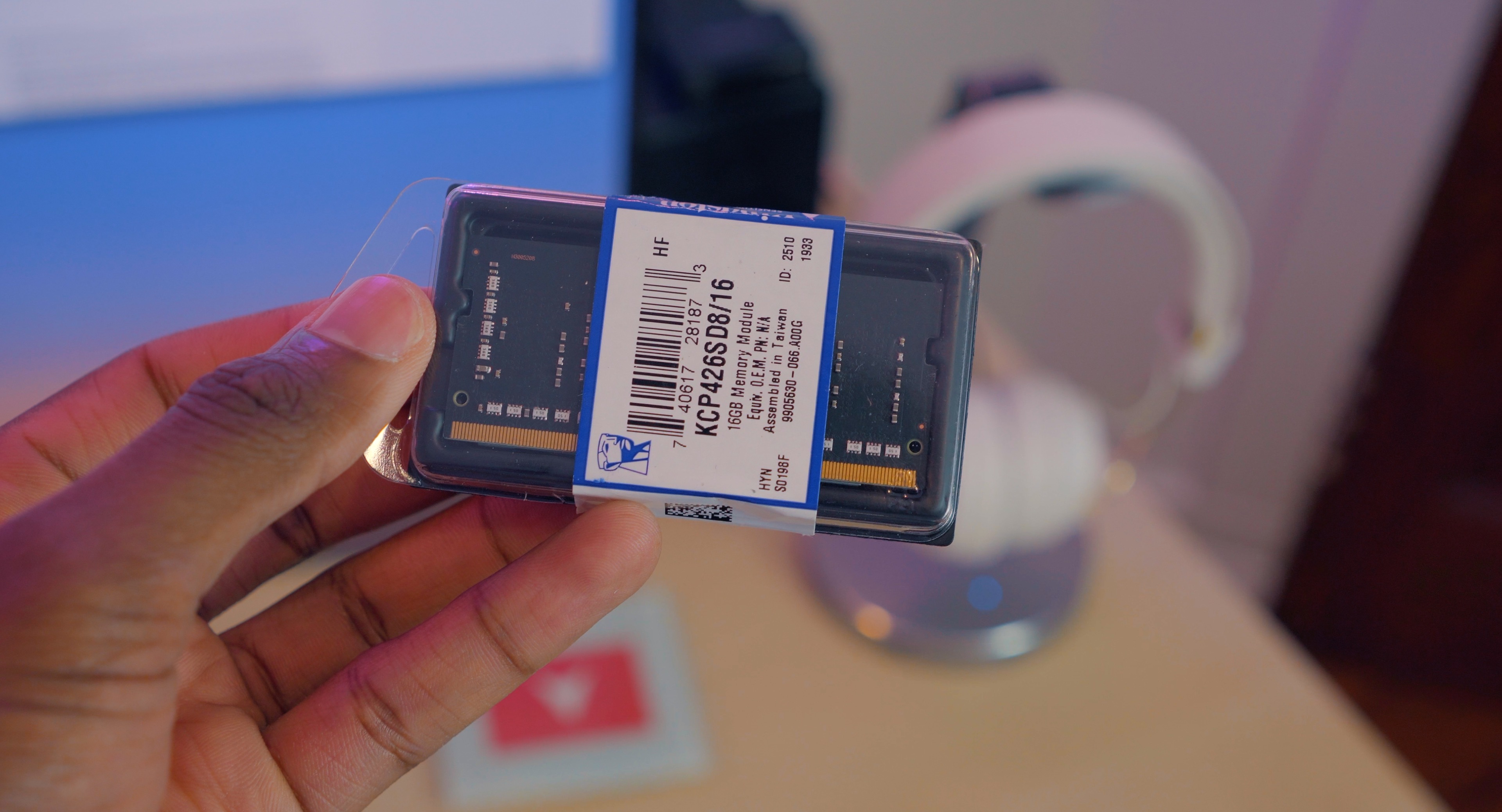 Adding in the extra 16GB of RAM has been pretty helpful overall. With applications that are very RAM hungry like Chrome and certain Adobe applications, you can definitely see a difference. 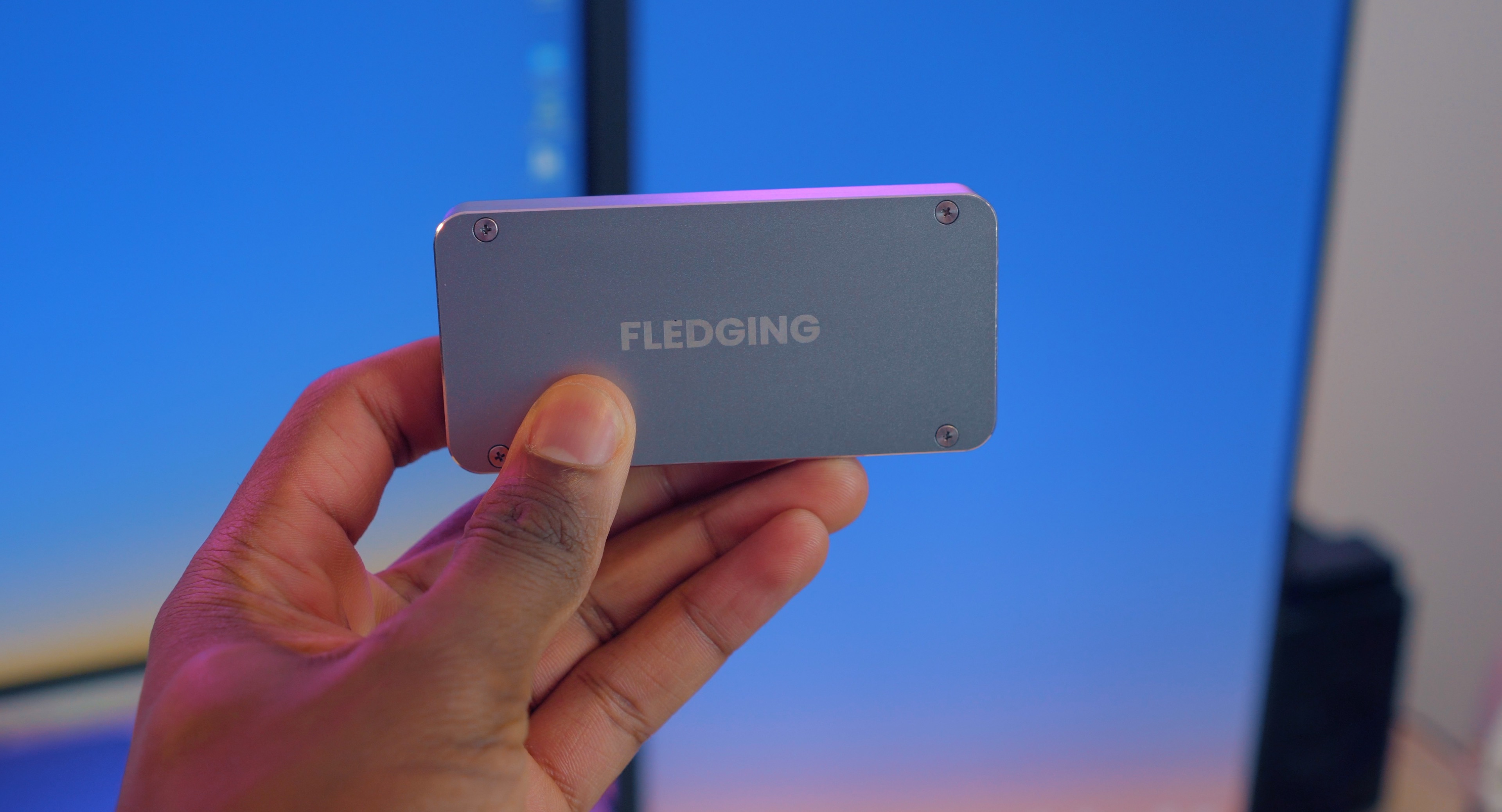 When addressing storage, there was really only one avenue I could take given the way the Mac mini is built without the ability to swap out internal storage. I scoured the internet looking for an external drive that would fit my fancy and the desired budget.

Ultimately I decided on the Shell from Fledging. It’s a small, portable Thunderbolt 3 drive and I’ve loved using it so far. Their Amazon listing advertises transfer speeds of 2,000 MB/s+ read & write, and when throwing this drive on the Blackmagic Disk test, it clearly does just that.

The Shell is $385 for the 1TB version, and for that price, I must say it’s a great option. It’s only a little bit taller and thicker than a Samsung T5, and smaller than a Samsung X5. I like that it has an aluminum chassis to match the aesthetics of the Mac mini; it’s not exactly space gray, but it’ll do. 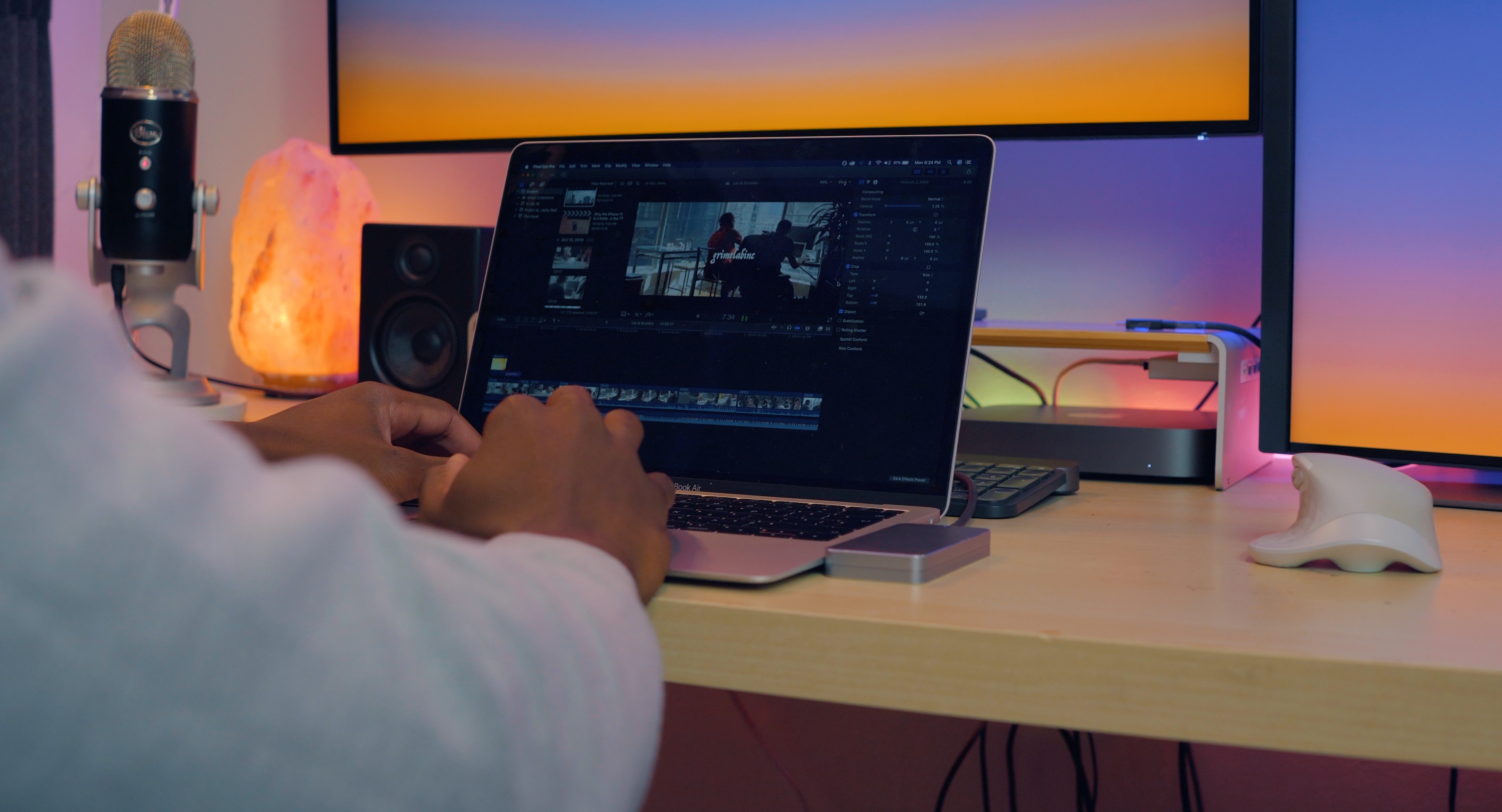 Another really great thing about having a large capacity external Thunderbolt 3 drive is that it allows me to get work done while on the go. I often find myself starting a video at the office, and then continuing my work on my MacBook Air after I leave. All I have to do is create a Final Cut library on the Fledging SSD and I can pick up right where I left off. 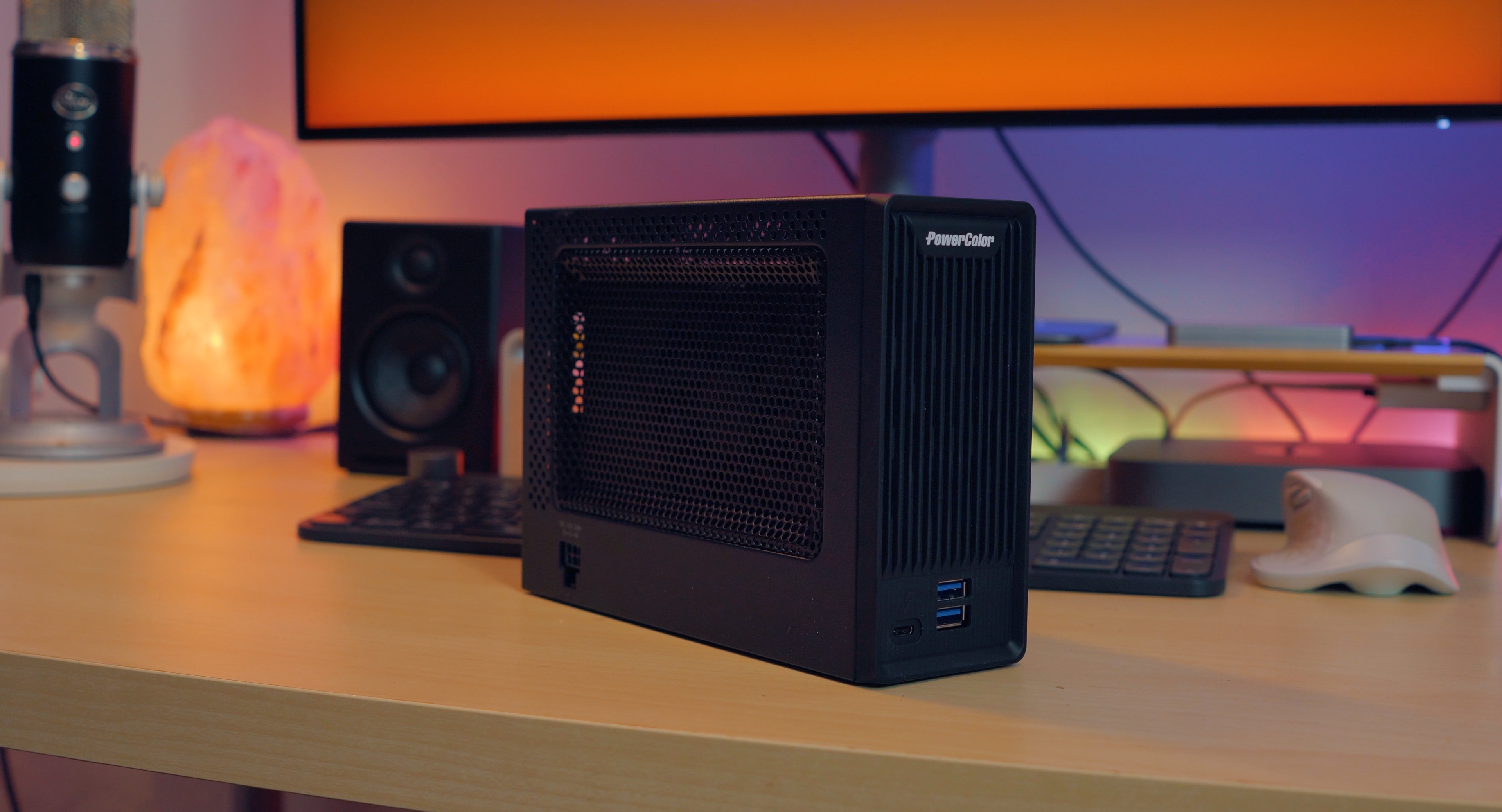 Arguably the most important aspect of this upgrade setup is the GPU. As we all know, the Mac mini doesn’t come with a dedicated graphics card, which can prove to be a big bottleneck in my line of work.

The PowerColor Mini Pro (review) is an all-in-one eGPU solution that houses an AMD RX 570 GPU with 8GB of video RAM. Color and graphics work make up the majority of my workload, and I wouldn’t be able to edit as fast as I’d like on a machine without external graphics.

You can snag this box on Amazon for $480 right now, and for those looking to use a 570 GPU externally, this may be the best way to go about it. It’s a little cheaper than what you might spend getting a GPU and chassis separately. 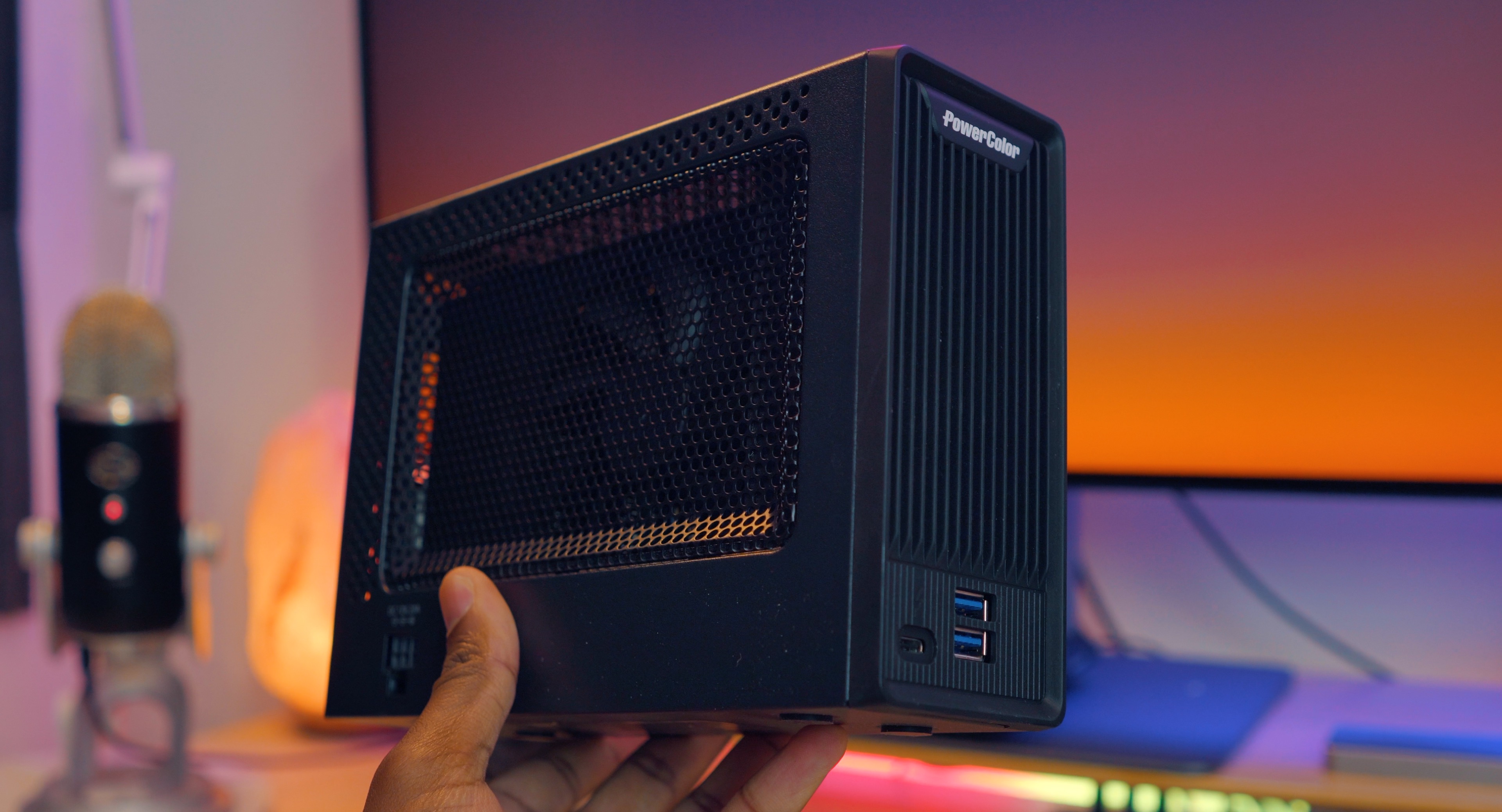 You can really tell PowerColor put a lot of effort into making the chassis as small as possible, which is great for portability. It’s less than 4 inches wide, and can easily be snuck behind a monitor if you don’t want the GPU being seen on a desk setup.

Obviously, weight isn’t an issue either. You can easily carry this box with one hand and even travel with it. The heaviest part of the whole setup is actually the power supply, which makes sense given how small the box itself is.

I took the PowerColor Mini Pro with me on a trip to New York recently. I used it alongside my MacBook Air to color grade Canon RAW footage, and it sped up the process considerably. 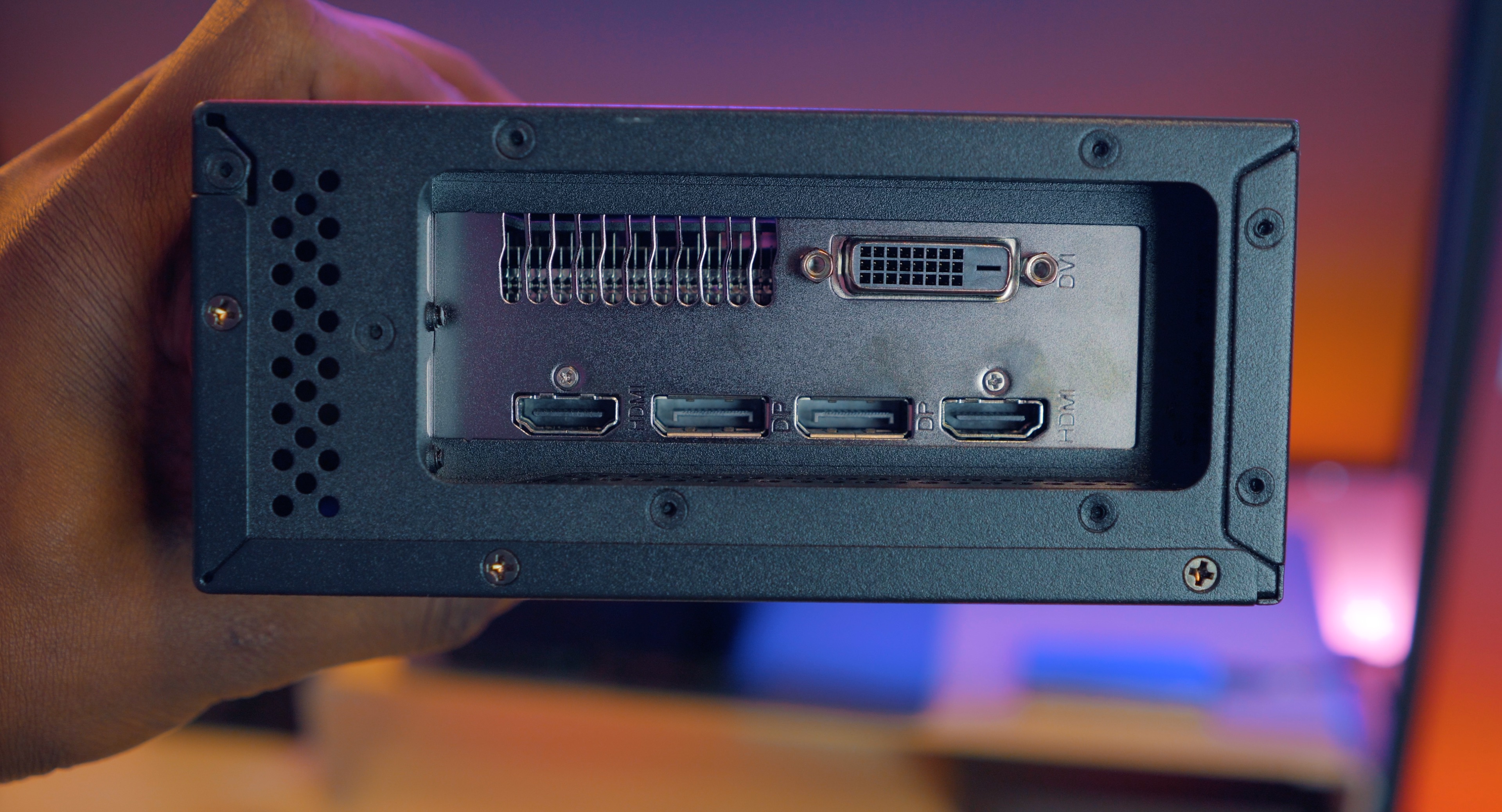 The PowerColor Mini Pro has two USB 3.0 ports on the front alongside the Thunderbolt 3 port. It’s also got a gigabit Ethernet port if you’re in need of one. The graphics card has 2 HDMI ports, 2 DisplayPort connections, and a DVI port. You should have no issue connecting the eGPU to any modern monitor setup.

My biggest complaint with the Mini Pro box is fan noise. Even when under no real load, the GPU is noticeably loud (around 50db idle). This is something to get used to when coming from an almost dead-silent Mac mini setup, but it’s a necessary sacrifice in my eyes to get that needed performance boost. 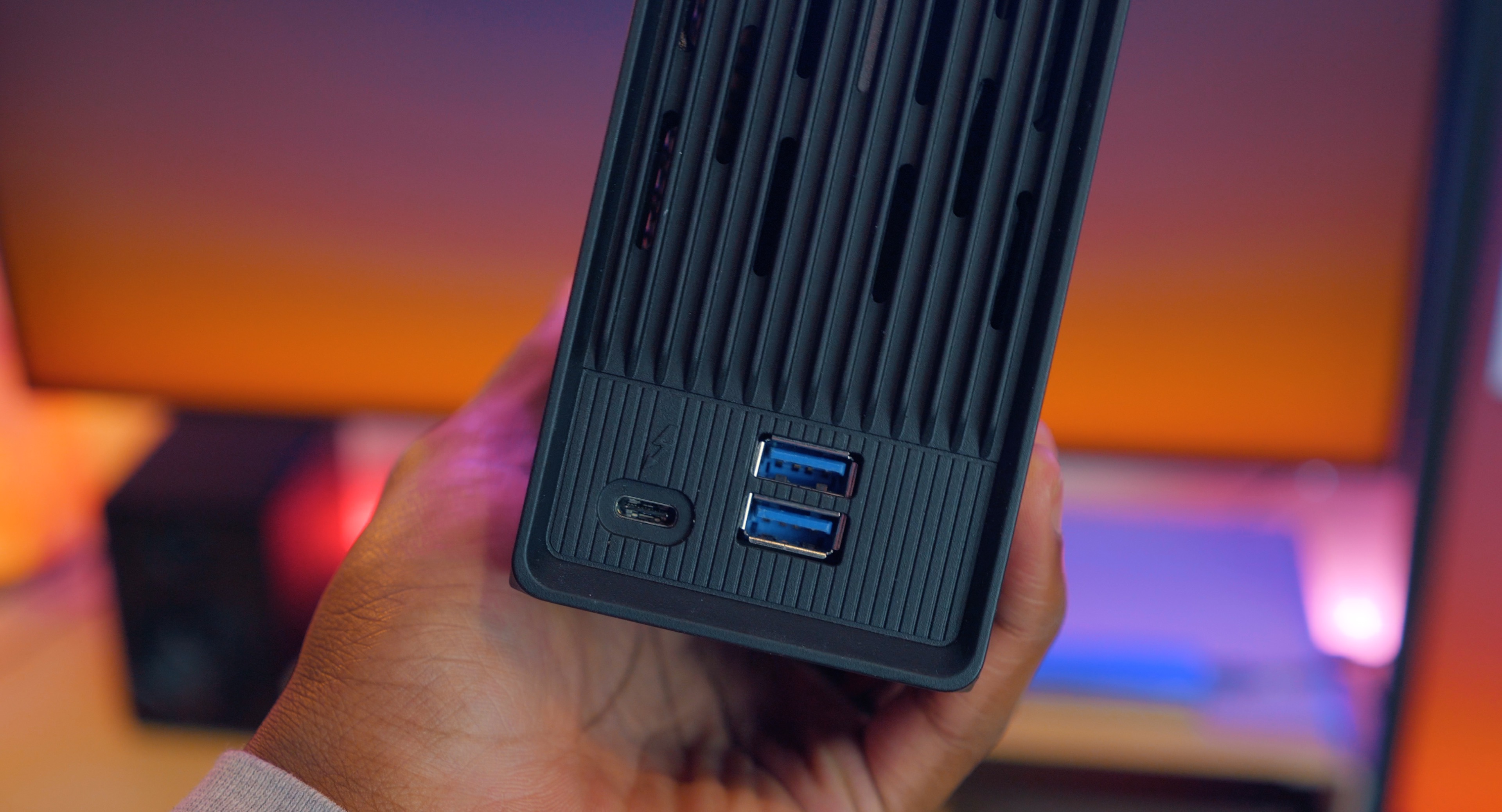 I did a few benchmarks to showcase the performance increase when adding all of the peripherals. The benchmark used was the BruceX benchmark. From the website:

BruceX is a small Final Cut Pro X XML file that you import into Final Cut Pro. It creates a very short timeline at a high resolution: 5120 by 2700 (at 23.975 fps). It uses standard Final Cut generators, titles and transitions. As it uses many layers of complex content, it requires lots of GPU RAM.

Here are the results: 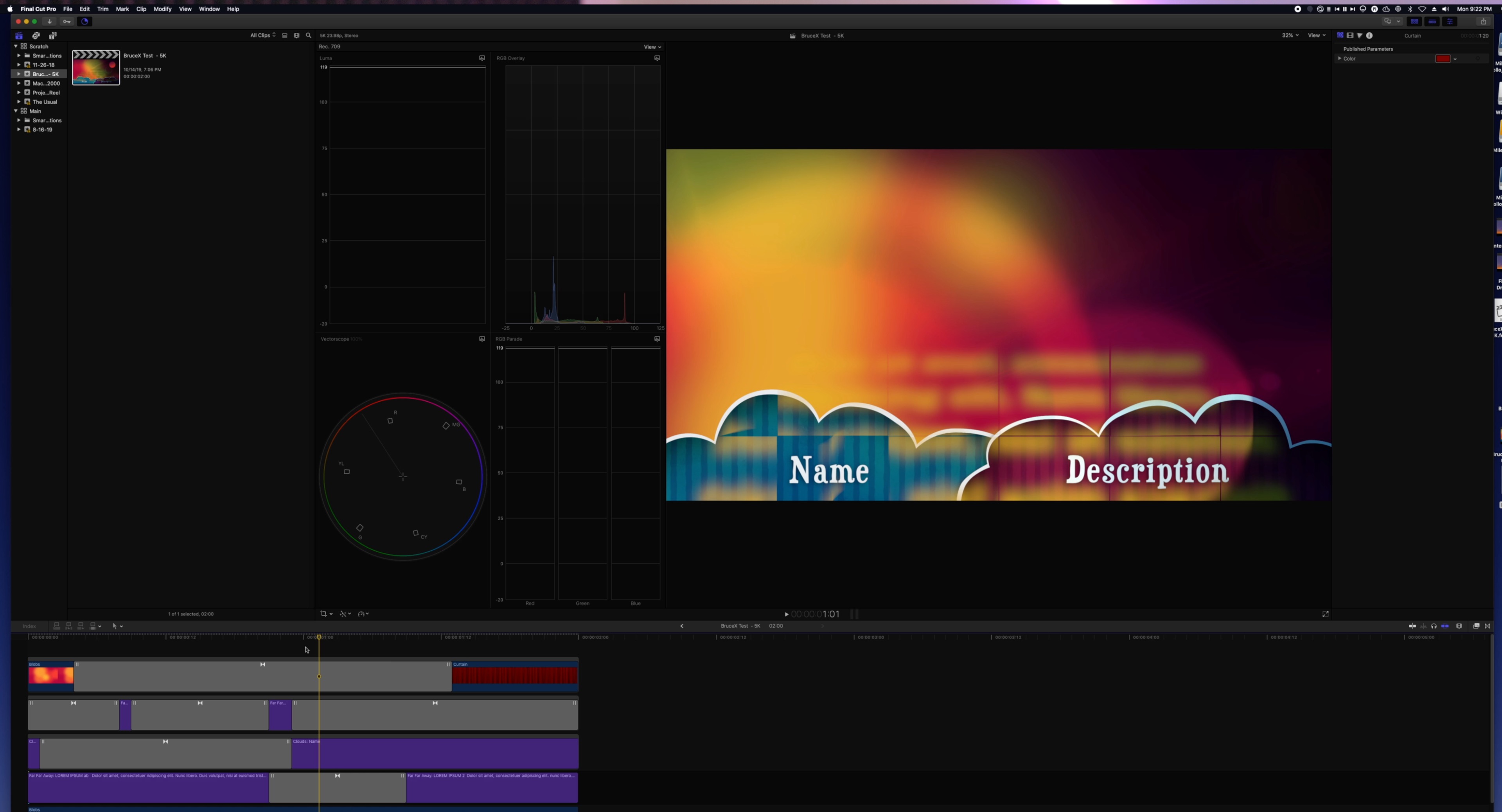 Since this is a setup built for my personal workflow, I did a simple render-out of a 5-minute video. This is the OnePlus 7T v iPhone 11 comparison video. The timeline consists of color-graded clips with transitions and effects.

That’s a pretty drastic difference as far as I’m concerned, and for the extra $800 of upgrades, it’s definitely worth it. Regardless of the benchmark numbers themselves, general performance and fluidity have increased substantially with this setup. With this rig, I’m no longer forced to playback footage in Final Cut Pro in performance mode. I can smoothly playback footage in full quality, which has been a very enjoyable experience. 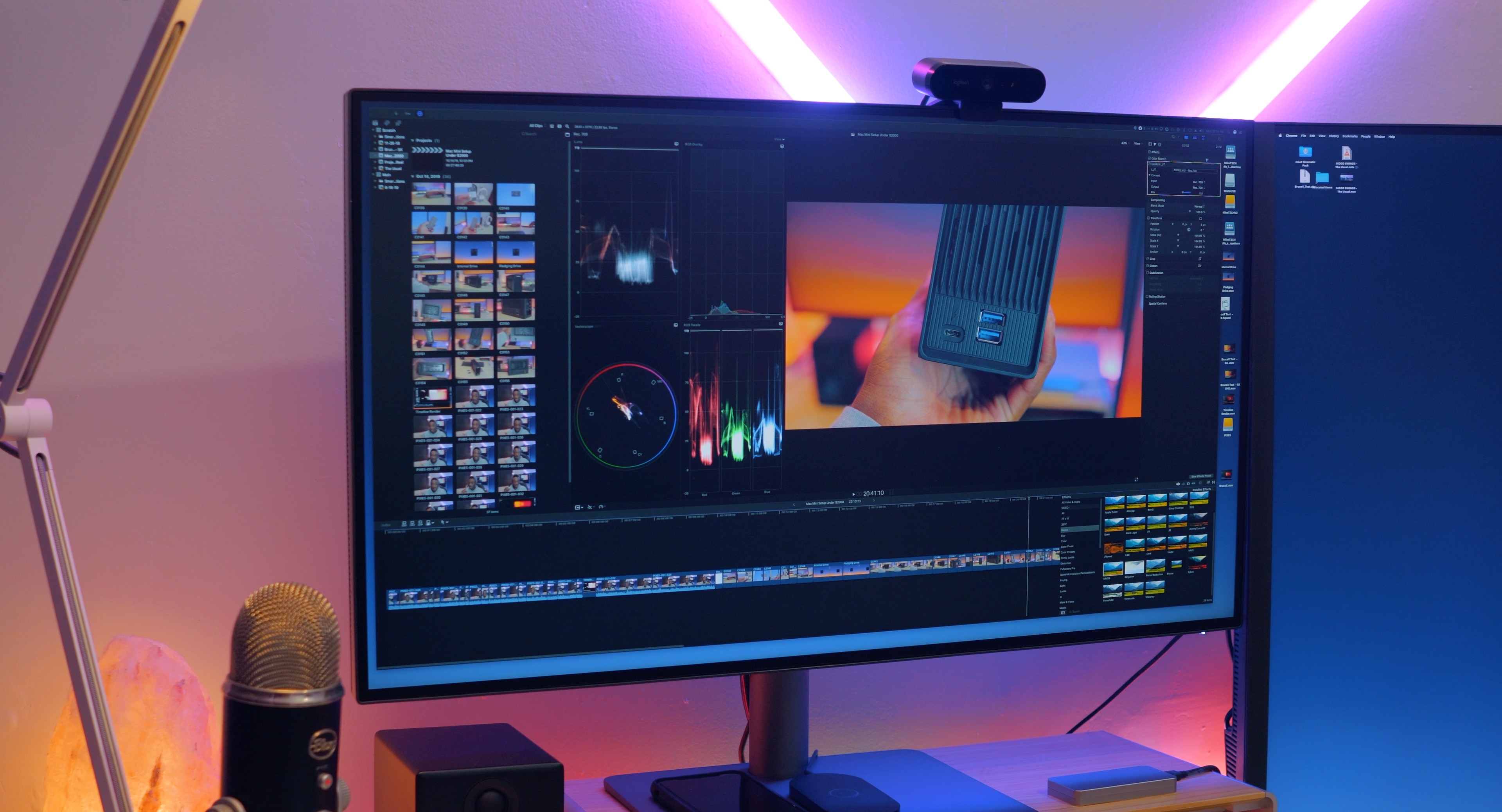 Overall, for the price, this has been a great rig to work with and edit videos. And with the expansion capabilities provided by the Mac mini and eGPU box, I can make additional upgrades down the line for more performance gains. Let me know your thoughts in the comments below!