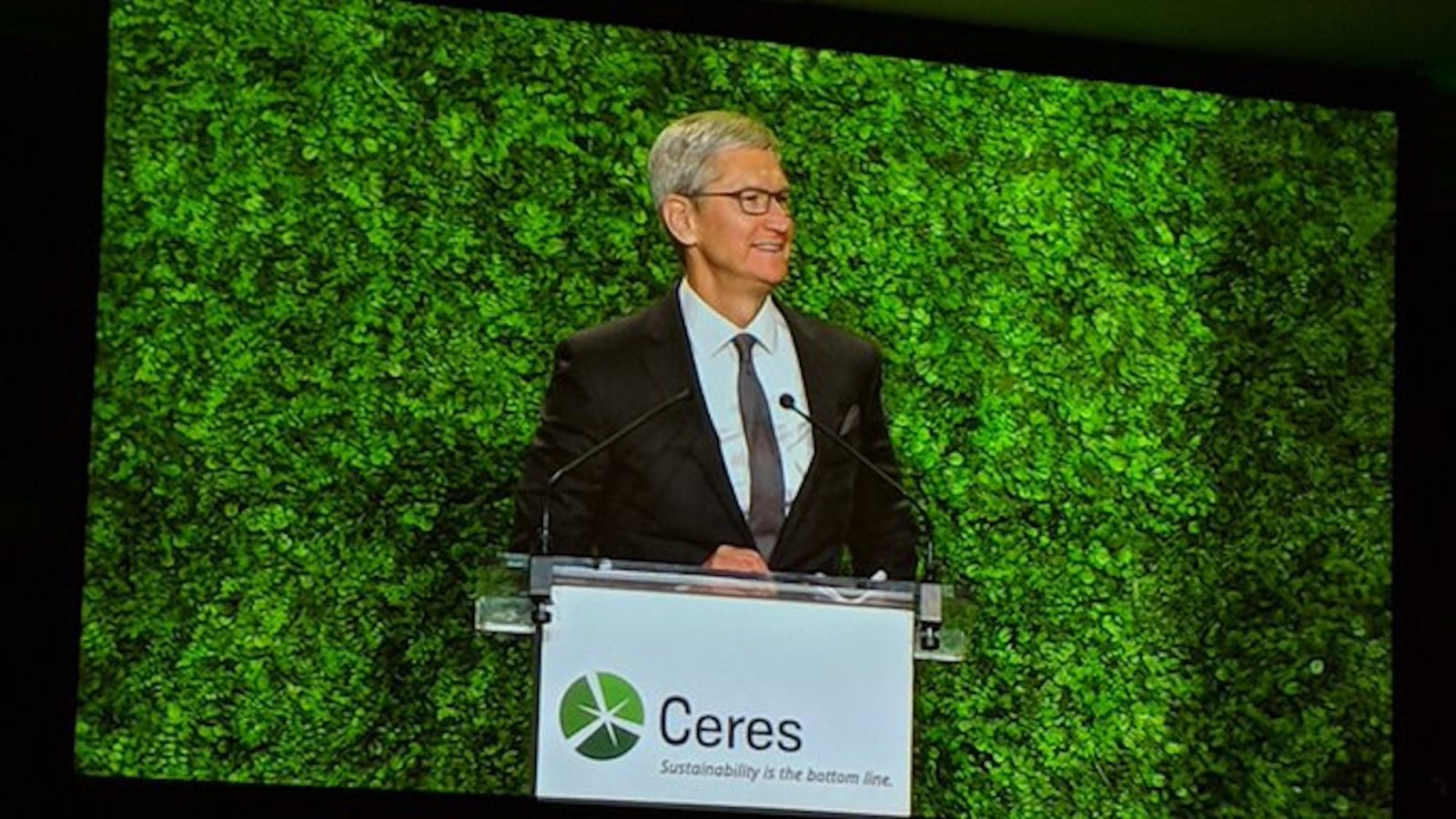 Over the past month, Apple has been touting its environmental and sustainability goals and accomplishments. Apple CEO Tim Cook continued the company’s work this evening, serving as the keynote speaker at the Ceres 30th Anniversary Gala in New York City.

For those unfamiliar, Ceres is a nonprofit organization focused on sustainability. Ceres says that it works with investors and companies to “build leadership and drive solutions throughout the economy.”

Apple’s progress towards sustainable energy was highlighted at tonight’s Ceres event. According to those in attendance, Cook used his keynote address as an opportunity to explain why Apple values the environment and renewable energy:

We don’t see climate change as risk, but opportunity. With our supply chain partners, we see a chance to develop new and valuable competencies. And because it is the right thing to do.

Cook also detailed how Apple was able to accomplish its goal of getting to 100 percent renewable energy, and offered advice to others in attendance. The Apple CEO was greeted with applause at the event thanks to his vocal stance on climate change and the effects it has on society.

Last month, Apple won a United Nations award for its use of 100 percent renewable energy as well as other climate change efforts. Furthermore, Apple’s VP of environmental, social, and policy initiatives, Lisa Jackson, explained how Apple is helping transition its suppliers to clean energy.

Companies have a responsibility to use their innovation and agility to lead on the climate crisis. Thank you to Ceres for their work and for this award — and to @LisaPJackson and the team for driving us all forward. 🌎🌍🌏

At Ceres Gala: @Apple CEO @Tim_Cook :: We don’t see #climatechange as risk, but opportunity. With our supply chain partners, we see a chance to develop new and valuable competencies. And because it is the right thing to do. @CeresNews @MindyLubber pic.twitter.com/FTKHF7jk6h

We can't face challenges by "shrinking our thinking or pulling up the draw bridge," @Apple CEO tells room of climate change activists at @CeresNews gala. He tells corporate leaders they are failing if they are not building #ClimateChange business strategies. #esg pic.twitter.com/mBrWfqQmJ5

Big applause for @apple CEO Tim Cook from from @CeresNews because he spoke out — and stayed in — when US backed out of Paris climate agreement. He's keynoting at 30th anniversary bash for Ceres. pic.twitter.com/o7mdnH2xZJ