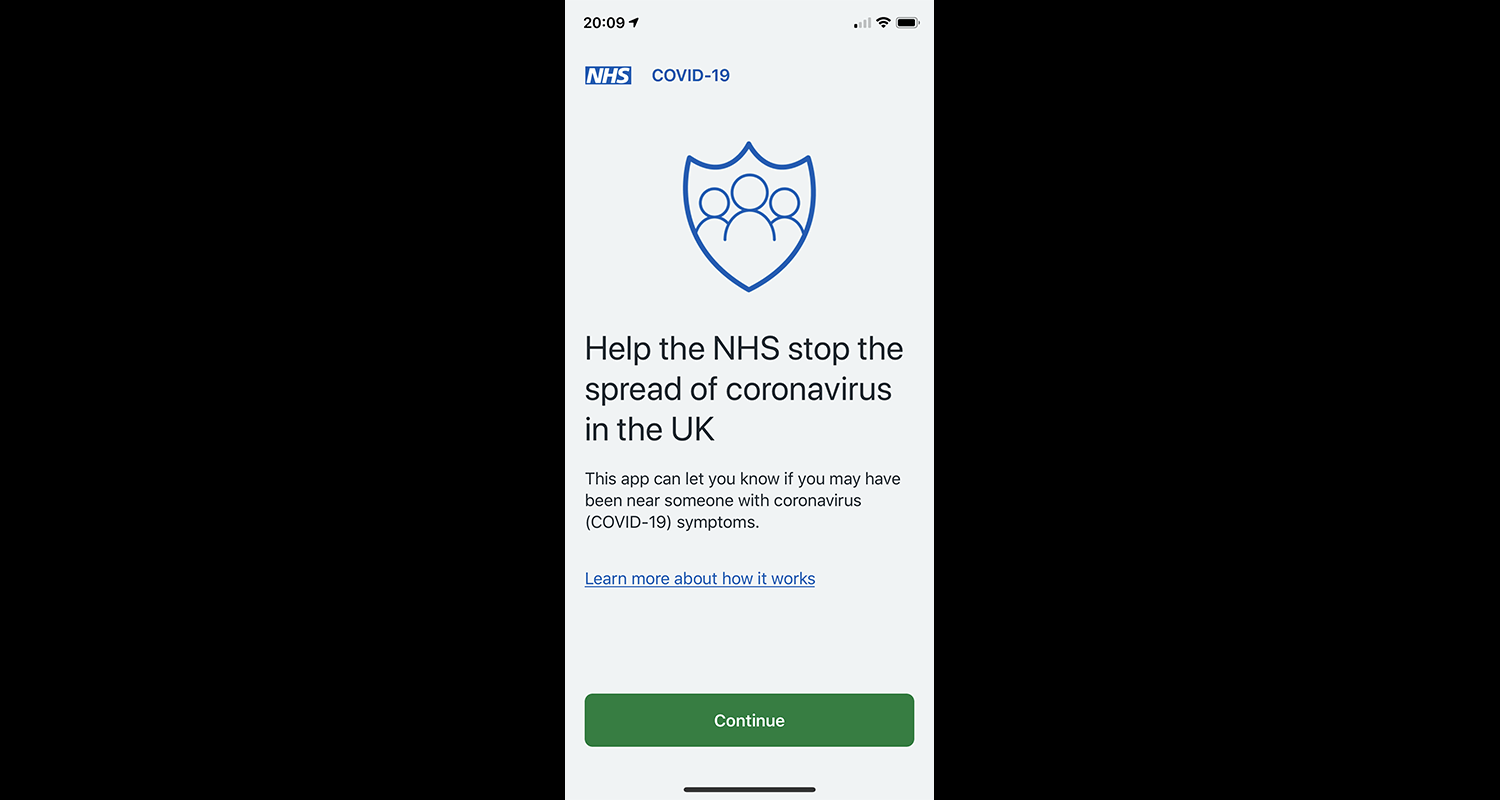 Britain’s standalone NHS contact tracing app has gone live on the Apple and Google app stores in order to allow real-life tests to be conducted.

Anyone can download and run the app, but it will only accept positive coronavirus diagnosis reports from those in the test area on the Isle of Wight, a small island off England’s southern coast …

The app has courted controversy for two reasons. First, and most controversially, it doesn’t use the Apple/Google API. Second, it requires some location information when installing the app.

Apple and Google built their API with eight privacy safeguards. Some of these also apply to the NHS app, but not all of them – meaning people may be more reluctant to install it. Even a former UK spy chief said it may need greater privacy protection.

Perhaps even more crucially, the NHS app will often simply not work. Although it can listen out for Bluetooth codes in the background, it does not send any codes unless the app is in the foreground.

That means that if I’m sat next to you checking my email while you are playing a game, neither of us will receive Bluetooth codes from the other – meaning the app has no way to know that we were in close contact. In contrast, apps built using the Apple/Google API will send and receive codes all of the time.

There is some hope of sanity prevailing: a new report yesterday said that the British government has asked its developers to ‘investigate’ a possible switch to the Apple/Google API, but the app as launched today doesn’t use it.

There have been contradictory reports about what location information the NHS contact tracing requires in order to install it. A government blog post claimed that no location data is collected, while different versions of the apps seen by security researchers and journalists required either a full or partial postcode to be entered. The launch version requires a partial postcode, as we’ll see below.

On opening the app, an introductory screen briefly explains what it is, with links to more information on a website (top photo).

The second screen requires the first half of your home postcode (zip code). The government appears to have tried different versions of this, as some of those shown pre-release versions say that it required their full postcode. 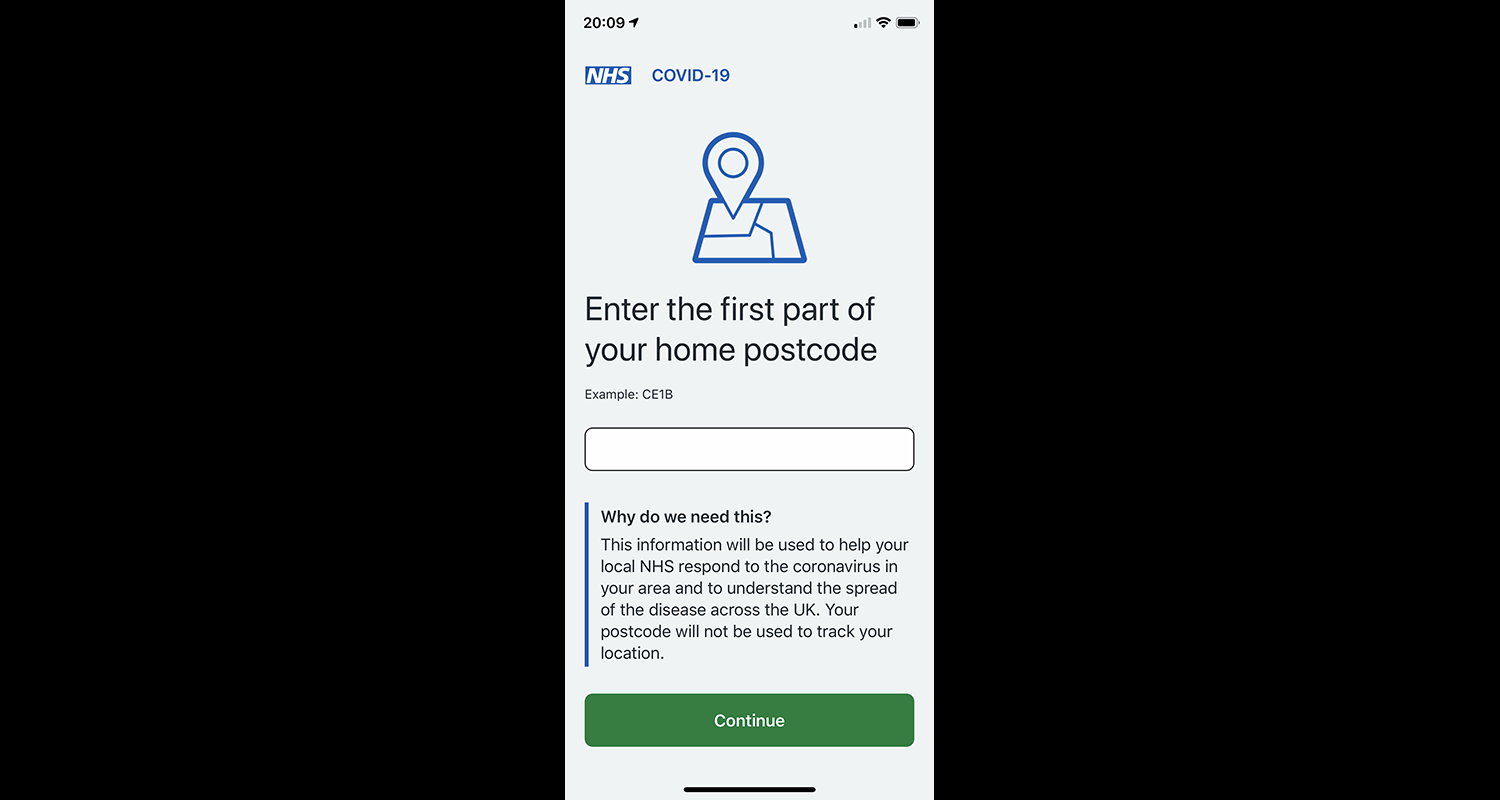 The first half of a postcode covers a variable area roughly proportional to the building density. You can see here examples for central London: 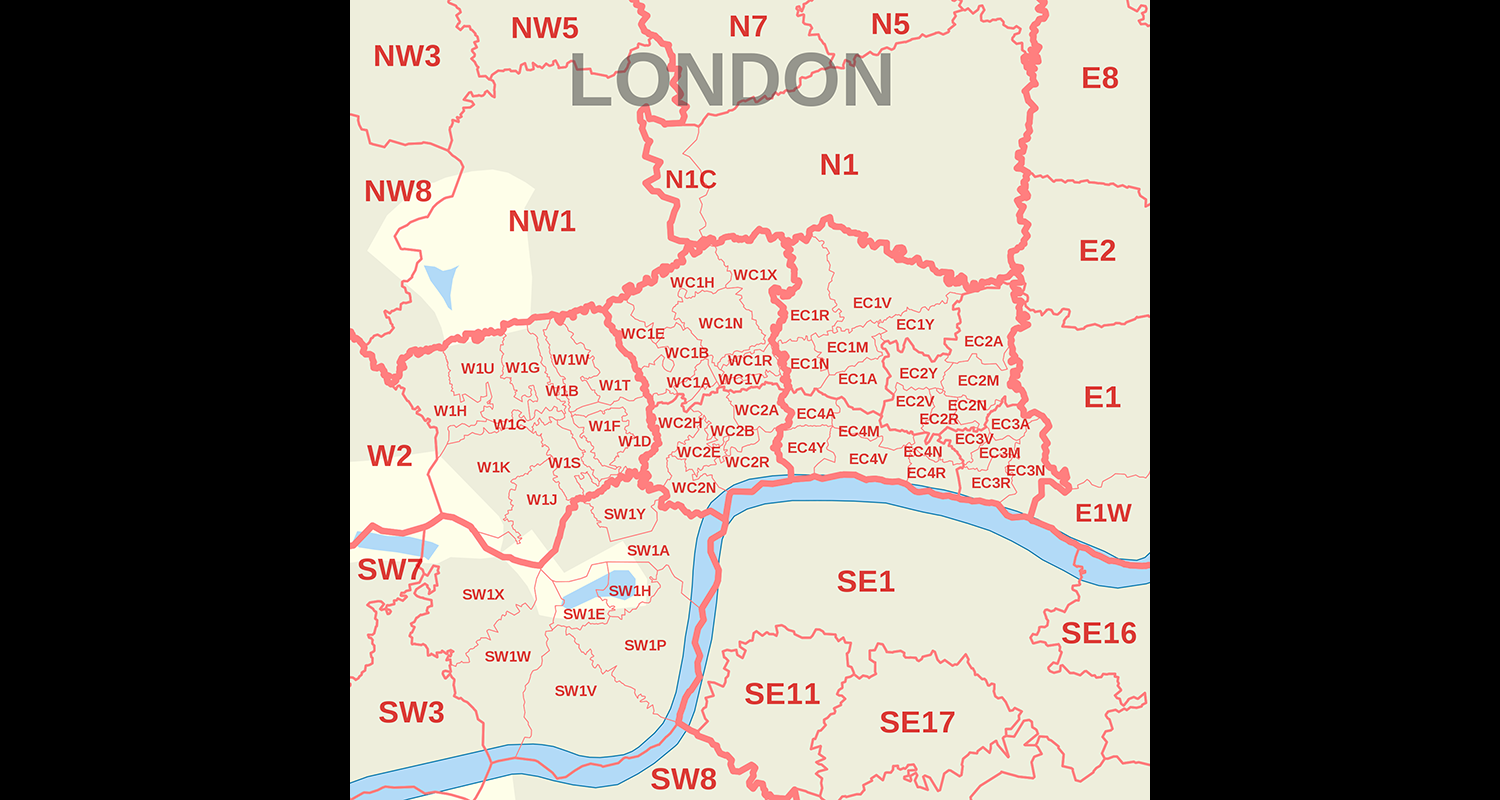 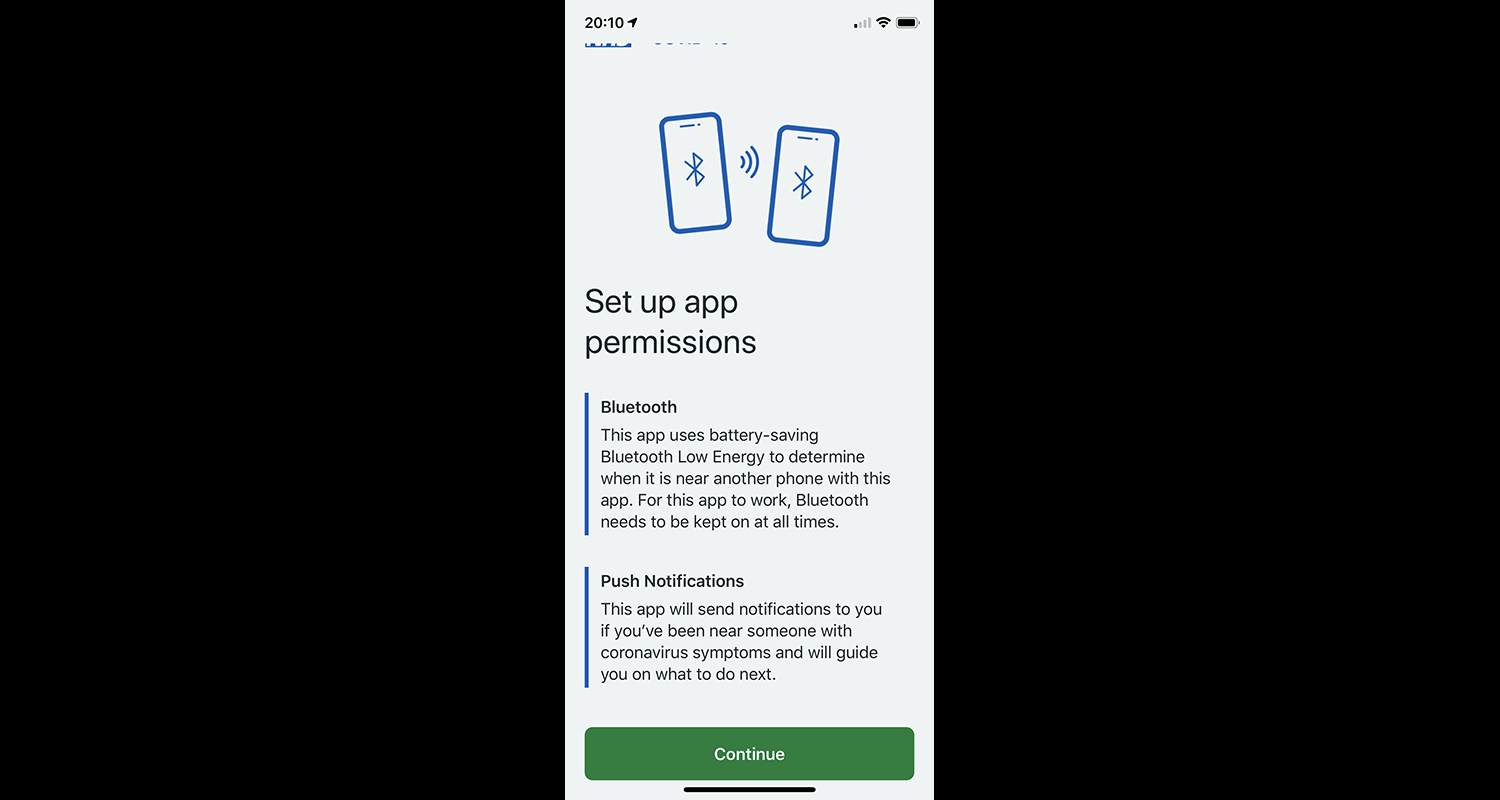 The final screen is rather problematic. Only small text advises that it is now working, and there is nothing to warn people that they have to keep the app in the foreground in order for it to send codes. 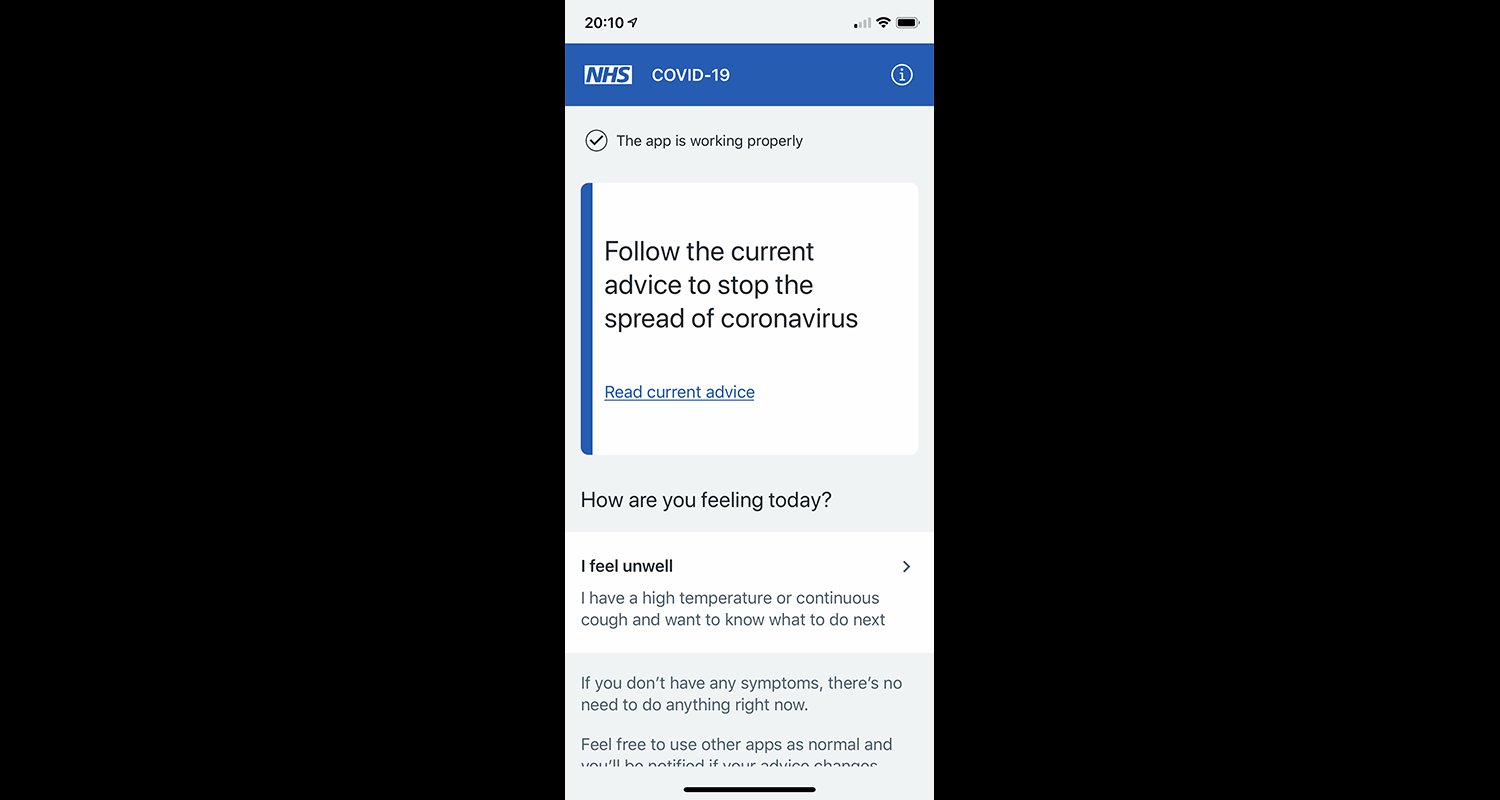 The likelihood is that most people will assume it now works all the time, and will happily use their iPhone for other things while close to people, unaware that it will not send any codes.

There is an additional link for healthcare workers. It’s assumed that personal protective equipment (PPE) will prevent infection, therefore the app would ideally want to be toggled off while wearing PPE to prevent false alerts. However, there is no app toggle to do this, so they are instead asked to switch off Bluetooth while working. 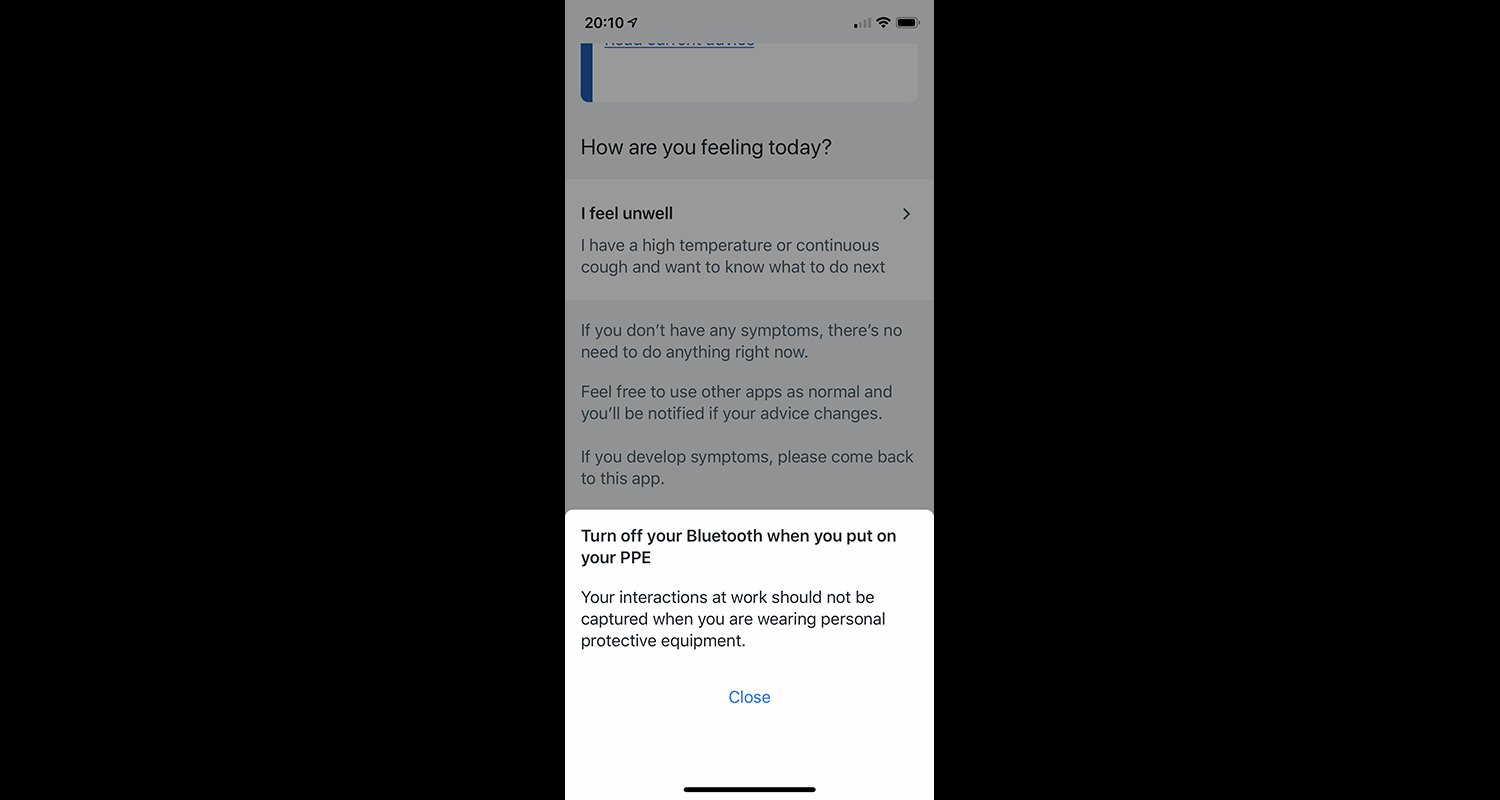 There’s a prompt that asks if you feel unwell. If you do, it asks two questions:

For those in the test area, answering yes to either will display a free-phone number to have a swab test kit delivered to your home. If the test is positive, that will be recorded on the NHS server and your contacts will be advised they have been exposed.

An Info button links to a webpage with a brief explanation:

Developed by the NHS with a team of world-leading scientists and doctors, the NHS COVID-19 app will play an important role in the fight against coronavirus.

If you develop symptoms of coronavirus, the app will:

anonymously warn other app users who have been near you provide advice from the NHS on the right action to take to help stop the virus spreading further help you to get a swab test This is essential in allowing the country to stay one step ahead of the virus.

The app is being launched on the Isle of Wight as part of the first phase of a large-scale, integrated phone-based contact tracing and swab testing programme. This will play a central role in how the UK manages the rate of coronavirus transmission going forward.

This first phase will allow us to gain feedback from users and make improvements to the app before making it available across the UK in the coming weeks.

One key element of the test will be what percentage of the population of the Isle of Wight chooses to install the app (which is available for both iOS and Android). Epidemiologists variously estimate you need uptake of anywhere from 60% to 80% to have a meaningful impact on the spread of the virus. All island residents will receive a leaflet today with links to the app.