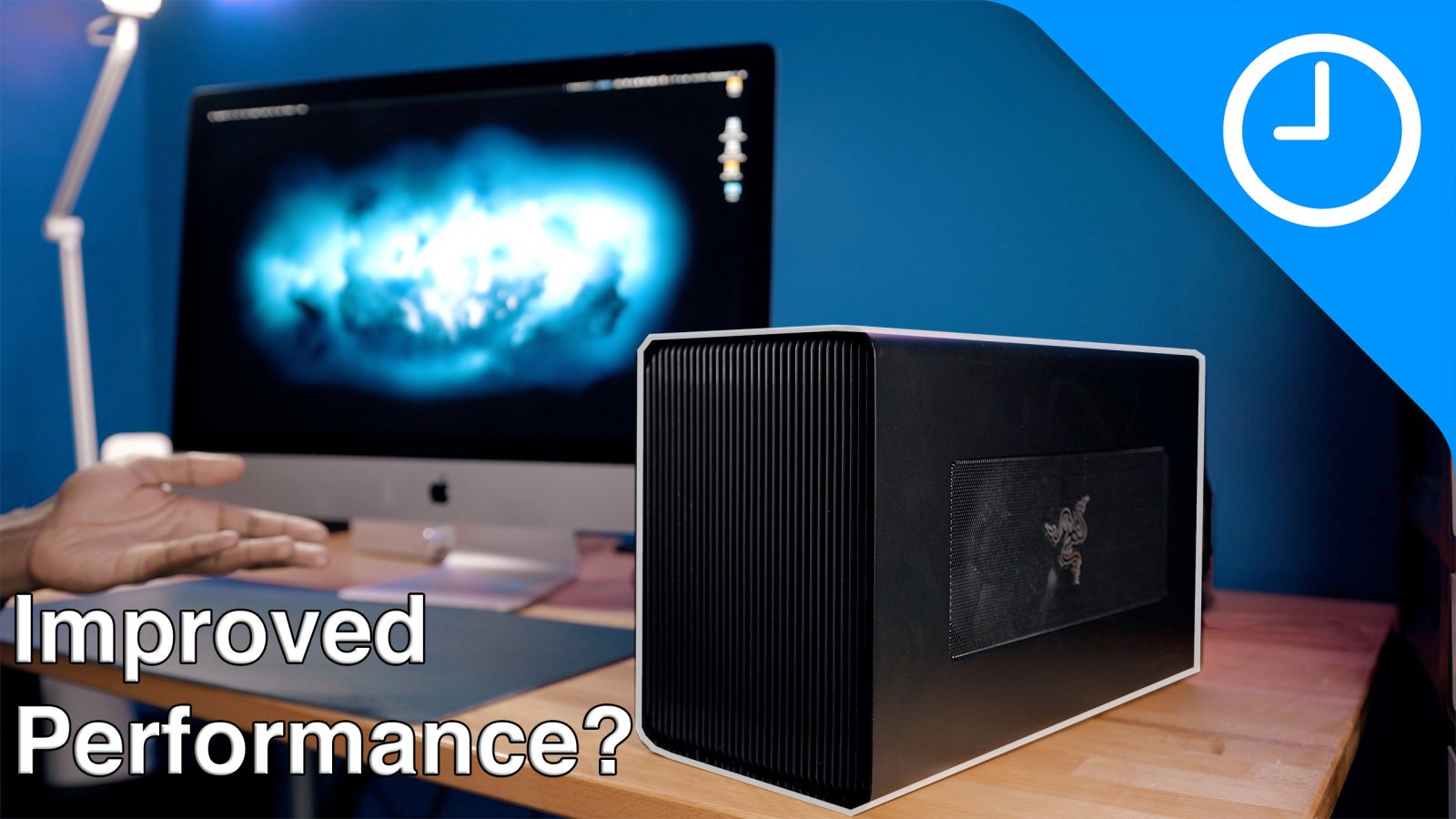 I’ve been doing some thorough testing with the baseline ($1,800) 27-Inch 5K iMac. We’re really trying to determine what demographic should be going after this refreshed model. I wanted to specifically focus on testing the graphical performance of the machine for high-quality photo and video editing.

Out of sheer curiosity, I hooked up my Razer Core X eGPU to the iMac. Inside the Core X, I’ve got an MSI Radeon 5700XT 8GB graphics card. I simply wanted to see if there would be a notable difference or benefit in using the eGPU at all. It’s known that in some cases, Apple’s bespoke GPU offering can outperform an eGPU setup. Although you’re using a full-sized desktop graphics card in an eGPU, there is a tremendous amount of bandwidth loss through the Thunderbolt 3 cable. This means you won’t be able to fully maximize the capability of a GPU connected through Thunderbolt 3, compared to an integrated Radeon GPU.

I decided to do various different video exporting tests in Final Cut Pro X. I also tested both GPU’s in Unigine’s Heaven benchmark to determine which solution would be better for gaming.

These results aren’t very consistent, nor as consistent as I hoped for. But there are some definitive differences between these two setups. Firstly, exporting with an eGPU is definitely going to allow for smoother general performance while exporting projects. Whenever I’d export a Final Cut project (with heavy effect/transitions) with the 5300 GPU, it’d completely choke up the machine for any other tasks. This makes it difficult to do basic tasks, like web browsing or using other applications. This was something I more or less never encountered with the 5700XT in the eGPU. I’d assume that this is due to the 5700XT having much more VRAM (8GB vs 4GB) to work with.

Unigine Heaven is a very popular benchmarking platform we consistently use for testing the graphics capabilities in Macs. This benchmark is excellent for determining how well the GPU in question can handle 3D-Rendering and perhaps some gaming.

In this case, the internal 5300 GPU outperformed the 5700XT in this benchmark. If you’re looking to game on the iMac, you should definitely avoid using an eGPU. The dedicated GPU inside the iMac will be plenty for some moderate 1080p gaming.

Overall, for certain rendering tasks (mostly 4K video; the 5300 GPU and eGPU are going to offer very similar performance figures. However, if you’re working with higher resolution video (6K and 8K video), the eGPU is going to be noticeably faster and smoother across the board.

For most people, an eGPU setup isn’t very practical or efficient. Because, if you opt for the i7 variant of the iMac, you can upgrade the GPU for ($500) less than the total cost of this eGPU setup. The total cost of my enclosure and graphics card setup is $730, which would be silly to opt for versus getting the $500 Apple upgrade to the 5700XT with 16GB of RAM.

A problem for some, however, is that you may want that 5700XT upgrade, but aren’t interested in the other upgrades. Apple only lets you upgrade the graphics card on the $2,300 i7/512 model, which is unfortunate. And given the stellar performance of the entry-level i5 processor, some buyers might only want the upgraded graphics card and are willing to forgo the i7 processor.

In this scenario, opting for an eGPU setup might make sense if you’re looking to save as much money as possible. The total cost of the baseline iMac with a Razer Core X/5700XT is around $2,500 as opposed to around $2,800 for the i7/5700XT variant of the iMac. Some people may be able to justify buckling down and spending the extra $300 for that 16GB card, and some may not.

If you’ve already got an equivalent eGPU setup on-hand, or just need a better graphics card for your enclosure, then you might not need to opt for the higher end-iMac. It mostly depends on your personal workflow. Sound off in the comments on what version of the iMac you’re using!