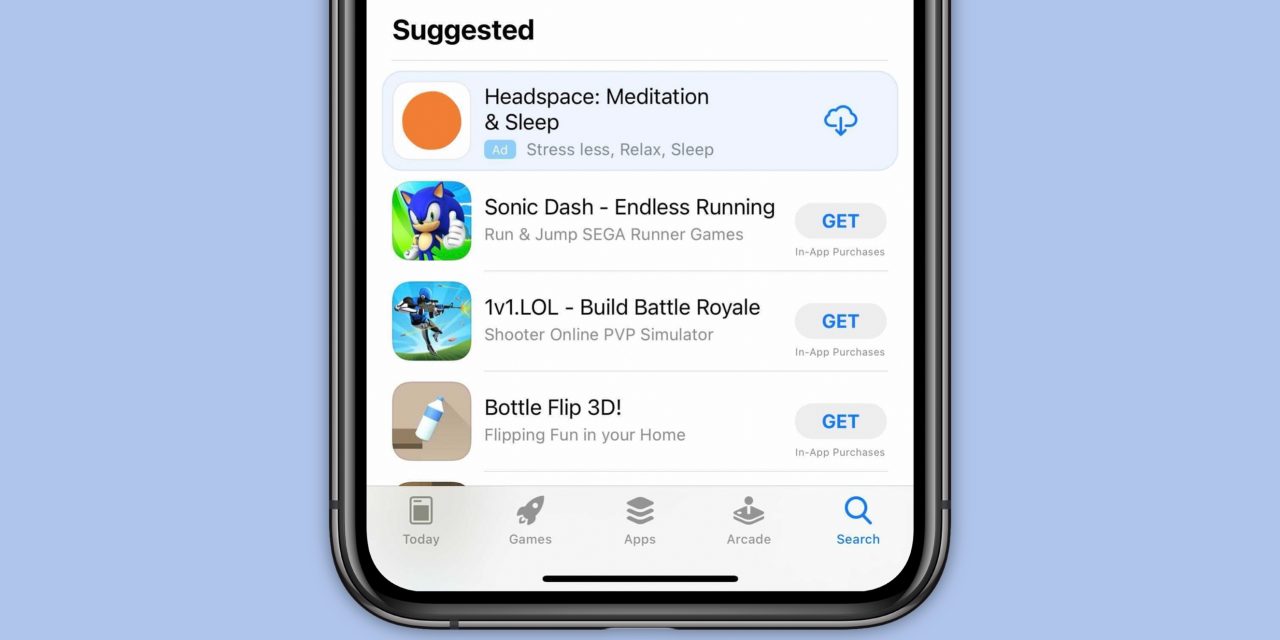 Apple has slowly been expanding the amount of advertising in the App Store, first with Search Ads in results, and more recently with an ad slot in the “Suggested” area of the App Store Search tab. New emails made public as part of the Apple vs. Epic legal battle, seen by 9to5Mac, offer a look at Apple’s internal debate over whether or not to roll out ads to the App Store.

App Store Search Ads were introduced in 2016 as Apple aimed to diversify revenue streams as part of its growing Services segments. A report in 2018 indicated that the Search Ads business generated around $1 billion annually in revenue, and that number has likely grown since then.

Apple’s internal discussion about adding Search Ads to the App Store appear to have began around February 2015, when Apple’s David Neumann emailed Eric Friedman a link to Google’s announcement about allowing ads in Google Play. Neumann is 15-year veteran engineer at Apple, while Friedman serves as head of the company’s Fraud Engineering Algorithms and Risk unit.

“Boy, I sure wish we could do this,” Nuemann wrote in the email referencing Google’s announcement about ads in the Play Store. Friedman responded and said that it was something that Apple had considered:

Yes, the ability to pay for promotion would be awesome. We’ve floated it several times as the way to end chart gaming: if people are willing to pay “marketing companies” (bot nets) to gain position, why don’t we just let them pay us to gain position?

No one is willing to take that on, however. I suppose it would get pretty cheesy, but at least it would be transparently cheesy.

I’ve actually managed to convince myself that our App Store charts aren’t really a discovery tool at all. Yes, they do drive some conversions, but that is (l suspect and haven’t verified) mostly the bots and/or humans responding to incentives from promotional companies. Think about it: a chart that puts YouTube and Flight Pilot Simulator 3D in the same list isn’t useful to a human shopper. Sure, you might buy both, but that decision won’t be motivated by their popularity relative to one another.

No, I think the primary function of the charts is “inside baseball.” They serve as a ‘Who’s on top?” list for developers so that they know which mechanical rabbit to pursue in the market race.

Neumann responded and explained that Apple should post a “Thoughts on App Store Discovery” essay on its website outlining the changes, then launch Search Ads in the App Store.

Friedman wrote back that while the “devs would love it,” Tim Cook’s public messaging about advertising needed to be considered:

The devs would love it. The problem is that Tim is telling the world that we make great products without monetizing users. Ads would be weirdly at odds with that. I do think that search and explore are much better discovery tools. Also popularity alone is a stupid ranking function for the App Store. It’s fine for music (though fuse is about to unleash a torrent of fakery there, too).

But in the App Store I don’t only want to know what is popular. I want apps that are high quality, well looked after by engaged developers, and retained (because useful) by other users. Being popular within a category is a nice to have and should mostly correlate with the other values I described.

Friedman went on to explain that Apple should combine all of its “ranking functions,” such as charts, recommendations, search, and explore, to make it such that “the only way to game the system is to be an engaged developer who makes a useful, high quality app that lots of real devices keep around.”

Ultimately, Apple ended up rolling out App Store Search Ads to developers around 18 months after this email exchange.