Spotify Plus being tested – a new paid tier, but still with ads 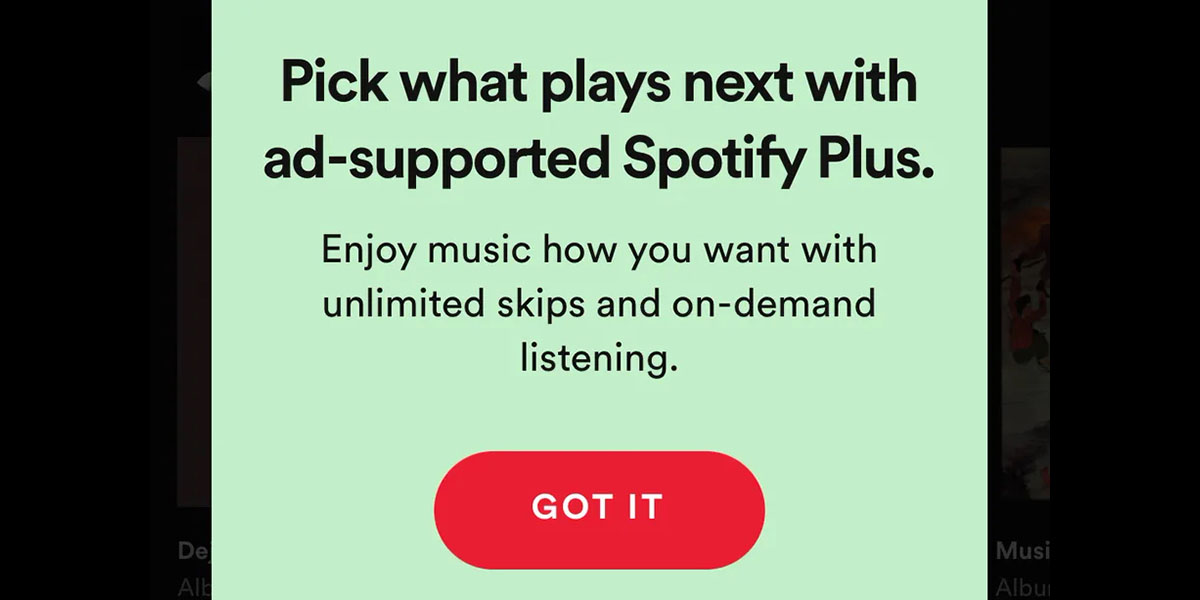 Spotify is testing a new paid tier known as Spotify Plus, to sit between the free and Premium levels. The good news is the price; the bad news that you’ll still hear ads …

If you’re frustrated by the restrictions Spotify places on free accounts, but don’t want to lay out $9.99/month for a Premium account, Spotify Plus might hold the answer, at just $0.99/month. The number of ads you hear is the same, but you get much more control over your listening.

The Verge has the details.

It doesn’t impose any limits on the number of tracks you can skip per hour. Users are also free to pick which specific songs they want to listen to, rather than mostly being limited to shuffling within albums and playlists […]

News of the new test tier was initially shared with The Verge by a reader (thanks, Gustovo!) and later confirmed by Spotify in a statement. “We’re always working to enhance the Spotify experience and we routinely conduct tests to inform our decisions,” a spokesperson said. “We’re currently conducting a test of an ad-supported subscription plan with a limited number of our users.”

However, Spotify cautioned that there’s no guarantee that the new tier will launch in its current form. “Some tests end up paving the way for new offerings or enhancements while others may only provide learnings. We don’t have any additional information to share at this time.”

As the site notes, even if Spotify does go ahead with the launch, there’s no telling when that might happen – the service sometimes tests ideas literally years before it finally launches them.

The company recently updated the iOS app with a What’s New feed for both music and podcasts.

“What’s New” feed that will immediately gather “all the new releases from the artists and shows you follow on Spotify.”

Spotify says that over 50,000 hours of content are added to Spotify on a daily basis, so this “What’s New” feed is designed to make it easier to keep track of the latest additions. You can access it by tapping the new bell icon in the upper-right corner of the Home tab in the iOS and Android apps.

Apple Music has added lossless audio and spatial audio to its own service, while Spotify has yet to follow suit.