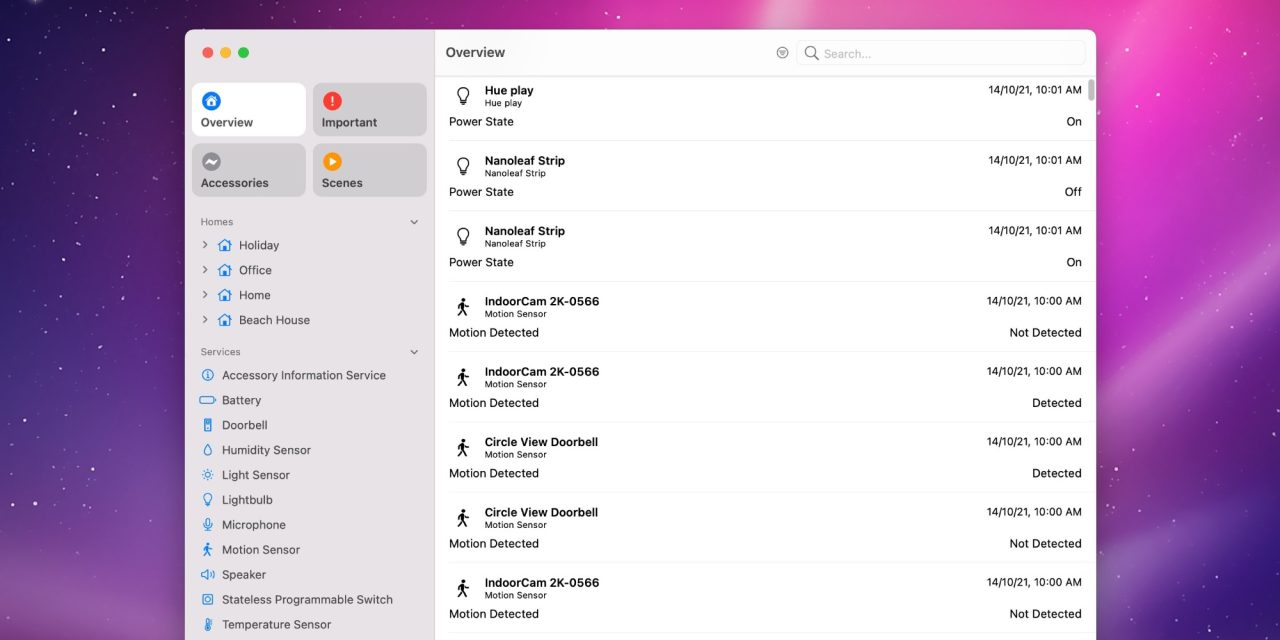 What do you work on and where are you from?

As a teenager, I got drawn into programming at a young age, teaching myself how to build websites and eventually iOS apps. I started with third-party apps for DeviantArt, eventually joining them to start their official app at the start of my career.

My interest in HomeKit started after getting a few Hue bulbs and having a look at the framework provided by Apple. I was surprised by the lack of apps for HomeKit so set out to solve some of the issues I had, starting with viewing multiple cameras at once, thus HomeCam was born.

What sort of things did you work on before tackling HomeKit opportunities?

Prior to HomeKit apps, I had launched the series of aforementioned DeviantArt-related apps along with a few small toy apps. In my day jobs, I’ve worked in other genres such as apps for shopping, logistics, and even a kids messenger app, Kinzoo.

Does being sort of the HomeKit apps maker require having a comprehensive HomeKit setup at home?

I have quite a small setup in comparison to some of the users of my apps, although I do have a substantial number of HomeKit cameras for testing as each one can vary so dramatically in how they function.

What’s your favorite HomeKit problem that you’ve solved through your apps?

I would have to say HomeLog is the app I’ve personally found the most useful in the last month it has been available. Seeing in more detail what HomeKit is actually doing when I am testing automations or finding a broken scene is invaluable.

And what do you think the answer would be for your users?

I would say the vast majority of my users really appreciate having a backup of their HomeKit setup codes via HomePass. You don’t think of this as necessary until that one time you lose a code, or simply can’t get to the device, but when that happens it is great to have a copy of your codes in the app, ready to use.

What inspired you to build HomeLog?

HomeLog was born out of my own desire to get more logging information out of HomeKit. Logging is something all smart home systems should have; it is impossible to debug automations or even devices going haywire without good logs of the events.

Where do you hope HomeKit will go in the next three years?

Within the next few years, I’ve got great hopes that Apple will transition heavily to Matter where it can. The opportunities that this will bring will be immense. More devices, more device categories, and more possibilities for apps.

And how much of that do you think will actually happen?

At this current stage, I don’t expect Matter to fully replace HomeKit in reality. Devices such as cameras require vastly more bandwidth than Matter is currently designed for, but I’m hoping that Matter will have higher bandwidth devices added in the next years.

What’s something that makes you happy that has nothing to do with work?

Outside of work, I am currently renovating a house from the frame up. I’ve really been enjoying diving in the process of that with its own ups and downs of project management. Working with something physical is vastly different to a digital product.

HomeLog is currently available for $4.99 on the Mac, iPhone, and iPad. Check out more of Aaron Pearce’s HomeKit apps here.