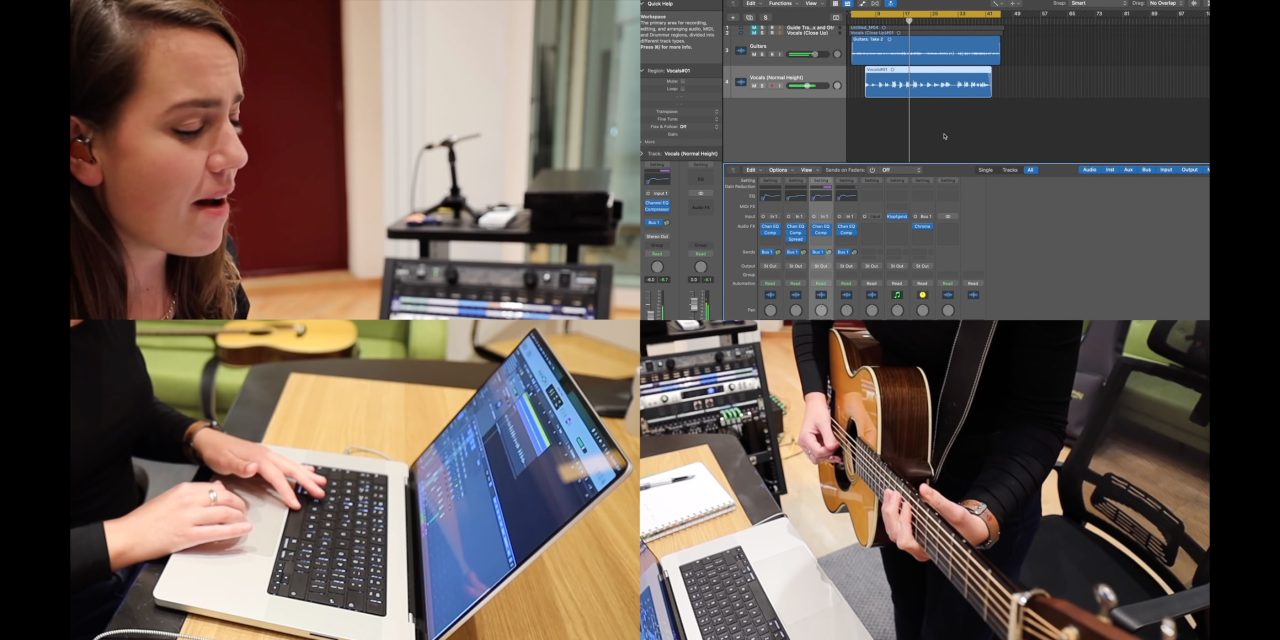 Mary Spender used Logic Pro, which is a pretty demanding app, yet was able to do all the work on battery power – while screen recording at the same time – without the fans kicking in …

Her machine is almost maxed-out. She opted for the M1 Max model with 64GB of unified memory, skimping only on the 2TB SSD.

Making a feature of the way she recorded it, she does include footage from an external camera, as well as from the screen recording. The audio quality of course doesn’t compare with studio mics, but I was still astonished by how good the result was from laptop microphones.

She experimented with different positions for both guitar and vocal tracks. The best guitar result was achieved while standing in front of her desk with the MacBook Pro at the edge of it.

With vocals, she tried sitting normally, and then leaning forward to get closer to the mics, and found that the former gave better audio – even before allowing for the better performance of the non-crunched position.

The webcam footage is the weakest element, for sure, with a fixed focal length and no depth of field control. But for a musician wanting to put together a demo track, it would certainly do the job.

Spender doesn’t get into the numbers. We don’t, for example, see the exact battery usage. But we can see that she worked in a pro app for over an hour, with screen recording overlayed, without the fans kicking in once. We can also see that the battery usage was very modest.

The final result is really great, combining standard to-camera views with all the behind-the-scenes shots of the recording itself and her editing in Logic Pro. It’s both a fantastic test of the capabilities of the machine, and a really creative idea beautifully executed.

You can watch the full video below. I’d actually recommend watching the end result first, which you can do by jumping to the six-minute mark, then watching the rest afterward.