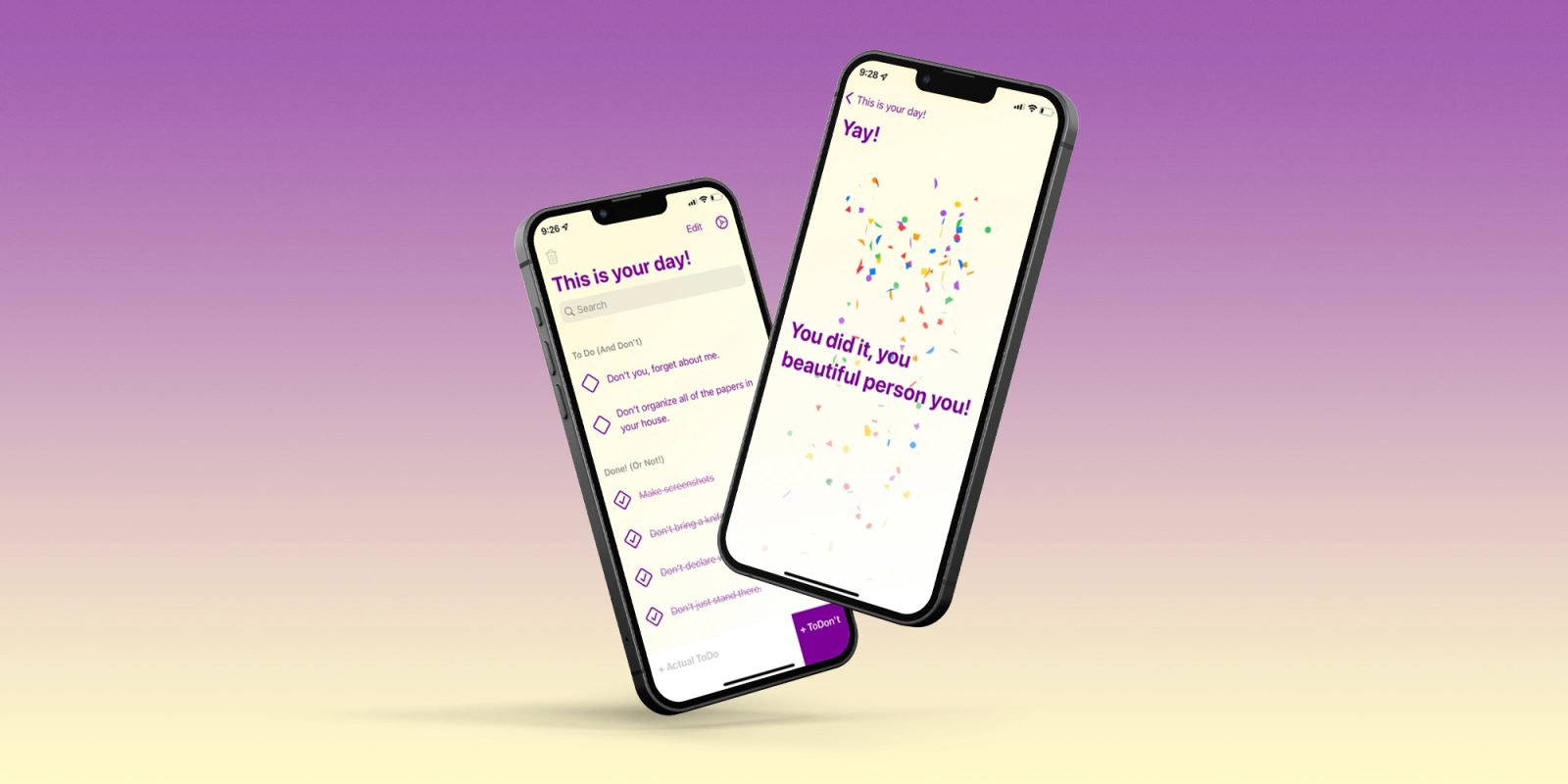 After being previewed during WWDC21, Apple launched by the end of 2021 Swift Playgrounds 4. With it, iPad users can finally create and publish apps without the need for Xcode or a Mac. Now, it appears a developer just created and published one of the first apps using Swift Playgrounds 4, and it’s called “ToDon’t.”

ToDon’t is a to-do app created by Cephalopod Studio and it’s basically filled with things to not do:

Add random, pre-made tasks to your daily to-do list, specifically of things to NOT do, so that you can scratch them off and immediately feel productive while having fun.

The app has dozens and dozens of things to not do! And you can celebrate your accomplishments with random celebrations when you check off all your items!

Although very simple, what caught our attention is a blog post by Cephalopod Studio showing the process of developing an app entirely using Swift Playground 4 on the iPad.

Starting with the good things, Matt Waller, developer of ToDon’t, praised how fast and versatile it’s to develop using Swift Playgrounds 4. He says it’s a perfect prototype if you want to do some work on UI, ease of publishing, and, most of all, not that expensive to start developing from scratch:

I remember working on my iMac and just getting absolutely hooked on how cool it was to create an app when I first started nine years ago. And to get it running on my phone especially! (I really want that ease of getting apps on the phone). It’s all so much fun. And the fact that it can now be done on a relatively inexpensive machine in a high-quality way is also just great.

That said, Swift Playgrounds 4 is far from being perfect in its first version as a development tool. ToDon’t developers had trouble with testing in-app purchases, saying it only becomes testable in TestFlight. Some other feature requests include CloudKit usability, a built-in Git, and a better debugging process.

Swift Playgrounds 4 still misses widgets and extensions, and it isn’t possible to test the app on the iPhone before sending it to TestFlight, so it takes a lot of going back and forwards to smooth things.

It’s important to note that during all of his creative process, Matt shared with Apple feedback regarding Swift Playgrounds 4, which will be necessary to see more features added in the future.

The developer also says in his blog post that “in the end, this is exactly what it says it is: Swift Playgrounds. It’s a playground! It’s a place that is primarily great to figure things out.”

It’s certainly not Xcode on the iPad, nor is it a brand new App Composer app or anything like that. It will shine mostly as a great educational and prototyping tool.

And heck, it’s pretty great as a sideproject engine so far. I say that because there is a sweet spot where constraints enable creativity, like the limitations of a sonnet. I’ll be interested to see if any masterpieces emerge.

You can check ToDon’t on the App Store here.

Are you trying to develop your own app using Swift Playgrounds 4? How is your project doing so far? Share your thoughts in the comment section below.