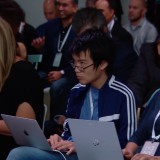 Abner Li has worked at 9to5Google since 2015 and in late 2020 took on the role of editor-in-chief. He is keenly focused on tracking what happens at Google and is often the first to spot new features in Google’s ever-growing family of applications that are updated on a daily basis, including Search, Assistant, Maps, Workspace, Android, and Chrome/OS.

To him, what Google does greatly impacts the technology space and modern life. Inside the company, he is particularly interested in the key products mentioned above, as well as up-and-coming services like Google Podcasts and Google Lens. Each are massive platforms that can be unwieldy to grasp, with Abner keenly bent on understanding their philosophy and future direction. He is most excited about Google’s plans for augmented reality glasses.

Abner spearheads the APK Insight program at 9to5Google to chronicle all changes in the company’s Android apps, often finding new features before they are officially announced. This includes redesigns and revamps, launches, and new products.

Another big area of interest is Google’s burgeoning hardware division. He detailed all of the Pixel 3’s camera features before launch and got wind of Stadia’s hardware controller. Most recently, Abner scooped the 2nd-generation Nest Hub’s Soli-powered Sleep Sensing capability and how it would integrate with Google Fit.

Before Google’s “Get The Message” campaign in August, Android’s Messages app was updated with iMessage reactions at the start of this year. In a very weird turn of events, Apple appears to be taking credit for Google adding iMessage reactions on Android.

Previewed earlier this month, Google is now rolling out its first iOS 16 Lock Screen widgets with updates to Chrome and Drive.

Back in June, we reported that Google was working on a new Wi-Fi 6 router, and it has now leaked as the “Nest Wifi Pro.”

Google Photos is rolling out a number of updates to Memories, like sharing, while Android and iOS is also getting an advanced collage editor.

Google Fi is rolling out a trio of updates today that are focused on the MVNO’s international experience when traveling, starting with Wi-Fi calling for iPhone subscribers.

Back in March, YouTube TV said surround sound would be coming to Apple TV, and today 5.1 audio is now available for that streaming box.

Ahead of iOS 16 launching next month, Apple Music for Android has been updated with the latest features to ensure parity as part of version 4.0, which is currently in beta.

On Tuesday, Google kicked off its “Get The Message” RCS campaign online and will be continuing with digital billboards in NYC going after Apple.

For the past year, Google has been increasingly calling out Apple for not adopting RCS (Rich Communication Services) on the iPhone. Meant to replace SMS/MMS, it has a number of technical advancements that would improve the messaging experience between Android and iOS users. Google is now launching a “Get The Message” pressure campaign in hopes that Apple will change its mind on RCS.

In recent days, the Meet merger widely rolled out to Google Duo for Android and iOS. Google is now readying to start the next phase where the Meet icon and name replaces Duo’s following a mobile app update.

Here are all the Pixel Watch bands coming from Google [Gallery]

Amazon Drive is shutting down in 2023, no impact to Amazon Photos

In an email to customers this morning, Amazon announced that its “Drive” cloud storage service is shutting down at the end of 2023.

Google is rolling out a handful of new Maps features for the summer, but the highlight is a significant update to location sharing that lets you receive arrival and departure notifications.

At the start of this year, we reported how a secretive startup founded by ex-Apple employees looked to be creating an Android-powered AR wearable that features a laser-projected display. Humane this morning released a minute-long teaser film that might tease what that projection technology looks like.

Hyundai opens reservations for the first hotel powered entirely by EVs, complete with a…

After entering early access preview five months ago, ChromeOS Flex is now stable (version 103) and ready for widespread use.

YouTube announced last June that Picture-in-Picture (PiP) was coming to its iPhone and iPad apps, and wide availability is now just a few days away for Premium subscribers globally and free users in the United States.

As announced a week ago, Google is now in the process of shutting down classic Hangouts for free consumers. Many users are finding that they can no longer access Hangouts for Android and iOS today.

Back in April, Google launched a “Switch to Android” iOS app that first worked with Pixel phones. Availability is now expanding to all Android 12 phones as Google makes its case for why iPhone users should switch.

Google announced today that Material You is coming to Gmail on the web in a redesign that also addresses complaints about the integrated view overhaul from earlier this year by introducing a “Gmail-only” view.