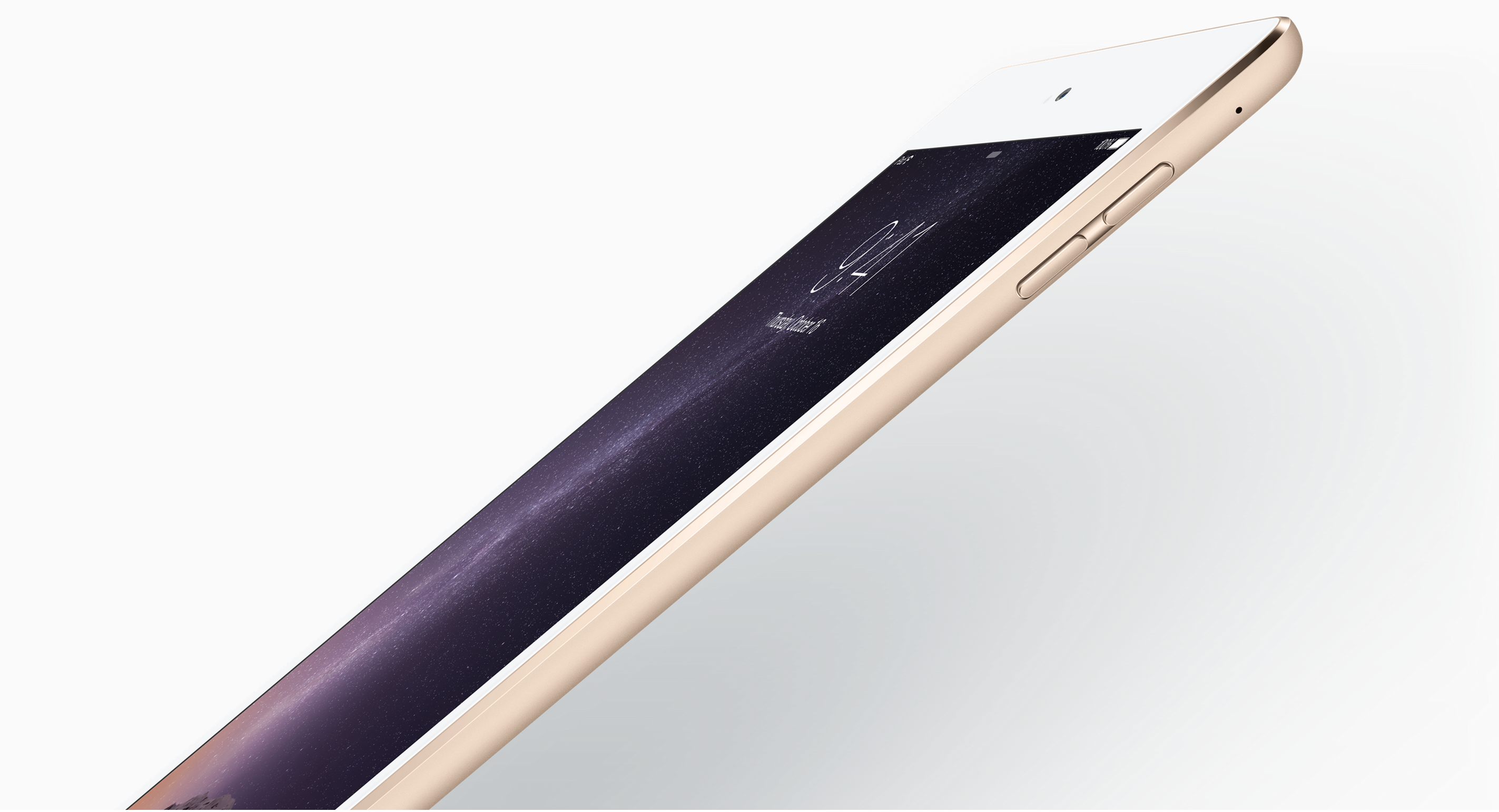 Reviews of the iPad Air 2 and iPad mini 3 have gone live across the web tonight and, as you may have expected, reviewers and pundits love Apple’s newest tablets. As usual, we’ve rounded up links to the reviews along with some choice quotes. You can find them all below the break:

Pick up an iPad Air 2 and you’ll immediately understand why Apple pursues that thinness with such single-minded zeal. It’s so, so thin: 18 percent thinner than the older Air, and even slightly lighter. It’s hard to believe that there’s a computer back there, let alone a computer as powerful than the laptop computers of just a few years ago. If there is anything magical about this new iPad it is this, this feeling of impossibility. The Air 2 makes the original iPad look and feel archaic, like a horrible monster from a long-forgotten past.

The latest iPad also was able to handle the new “continuity” features in Apple’s just-hatched operating systems. It made and received phone calls relayed by my iPhone 6 when they were on the same Wi-Fi network. And it was able to use Handoff, the feature that lets you complete certain actions, like viewing a Web page or writing an email started on a Mac, and vice versa. It also was able to receive and return standard SMS messages from my Android phone.

The problem was this: I couldn’t tell the difference between the Air and Air 2 while doing these things. The new model didn’t seem faster or smoother while running all my apps, perhaps because — like most people — I don’t use my iPad for the most demanding video-editing apps or high-end games. It registered pretty much the same network speeds as my Air.

The Air 2 didn’t allow me to hold or carry the tablet longer and more comfortably than the Air. Its weight of 0.96 pounds isn’t discernibly lighter than the Air’s weight of one pound. And its thickness of 0.24 inches is a barely noticeable reduction from the Air’s 0.29 inches.

In my outdoor test, the Air 2 beat last year’s Air, Samsung’s Tab S and Amazon’s previous Fire HDX, displaying a more even balance under both sunlight and shade. Outdoors, it only loses to a bona fide e-reader like the Kindle Paperwhite. But you’ll still have to crank the brightness all the way up to see the screen in the sun, which will run down the battery faster.

That anti-reflective screen also makes a great, though admittedly ginormous, viewfinder for snapping nature shots with the revamped 8-megapixel camera. It takes much crisper shots than before, and in many cases, ones as good as those I can take with my iPhone 6. But I won’t bring my iPad to some mountain peak, as some Apple promo shots suggest. My phone’s camera is the fastest one for me to grab. And it has a flash for low-light situations and took clearer photos of a speedy pig I met in a New York City park. (Relax, it was on a leash.)

My review iPad Air 2 has done extremely well as a photography assistant, with Photoshop and Lightroom Mobile handling plenty of heavy lifting. iMovie, likewise, provides a great experience thanks to the beefed up internals on the tablet. But what’s most exciting are the experiences that have yet to be launched, including the mobile version of Pixelmatr, which was demoed on stage at the iPad launch event. We’ve yet to see just how much additional processing power developers can wring out of the A8X, but even the first early attempts have shown a lot of promise.

The iPad Air 2’s battery performance is on par with that of previous generation devices, which is no small feat given that the volume of the batteries contained within is likely reduced to accommodate the new slimmer profile. 10 hours of mixed use is normal, I found, and Apple has once again delivered a device with an amazing life in standby mode, especially when you’re not using the built-in data connections. As for those, I found that Wi-Fi performed notably faster when used with my 802.11ac AirPort Extreme, while LTE on my local Canadian provider remained high, and likely carrier-limited in terms of what it was able to achieve, given the device’s new extended LTE support.

For that matter, do you need a tablet at all? If you’re at all like me, you’re already swimming in computers, from a desktop to a laptop to a smartphone to an e-reader. Where does the iPad fit in that world? And even if you’re not like me and have only a couple of machines, you may still be confused by the choice between an iPad and, say, a light and powerful laptop or a large smartphone.

For all types of device users, then, the iPad presents a quandary. Are Apple’s premium tablets still worth their lofty prices?

After using the iPad Air 2 for the last few days, my answer is: Yes, with reservations. Whether you should take a leap on Apple’s new Air depends entirely on how you use your other devices. If you’re not a big fan of personal computers and you don’t really like having your nose stuck in your phone all day, the iPad Air 2 might be for you. The iPad Air 2 is powerful enough to use as your main or secondary computer, after your phone, especially if you use your tablet as a replacement PC on the go, and if you’re looking to play processor-intensive games or run media-editing software.

With that understanding, it makes sense Apple continues to make the iPad thinner and lighter. To use this “PC in the shape of a tablet” all day while on your feet, it has to be light. It has to be easy to hold and operate for long periods of time. Touch ID is another essential element for the iPad to fulfill its enterprise purpose in this context. These mobile field workers spend much of their time outside the four walls of the corporate office. They are the most likely to have their mobile devices lost or stolen. Security is crucial for these deployments and Touch ID, which works as flawlessly on the iPad Air 2 as on the iPhone from my experience, solves a critical pain point for enterprise deployments that previous iPads did not. Apple also made an improvement to the display essential for field worker deployment. If you go outside to use the iPad as part of your job, eliminating the glare is a valued feature. From my experience, the work Apple put in to make the iPad’s screen less reflective lives up to the promise.

In the wake of dire sales, the Air 2 is exactly what Apple needed to keep the lineup fresh. It may not be a brand-new design, per se, but its thin frame helps keep the marquee tablet looking sleek and exciting, and the extra burst of performance ensures that it stays among the most powerful tablets on the market for the next year. It could use a little help with battery life compared to the Air, but it’s still an improvement over the iPad fourth-gen and older. Most importantly, the Air 2 feels like Apple hasn’t given up on the tablet form factor, even if it’s experiencing a dip in sales.

Its surge forward in speed and the convenience of the refined form-factor and Touch ID leaves the iPad Air 2 feeling like the true iPad for power users.

It must be darned hard coming up with a new tablet model every October. In any case, the list of incremental improvements keep the iPad Air 2 at the front of the state of the art. It’s a glorious, fast, beautiful, tablet, edging ever closer into laptop-replacement territory. And with the impressive iOS 8 and Apple’s universe of online services behind it, this iPad will light up a lot of faces under the 2014 Christmas tree.

I will continue using both iPads because they both have a place in my lifestyle and workflow. At the end of the day, I still use the iPad Air for the larger screen, while I use the iPad mini when I go out for a coffee and need to be a bit more portable. That’s not going to change any time soon.

The iPad created and made popular a market for powerful, portable tablets. The latest updates, along with iOS 8.1 and the App Store ecosystem, only solidifies Apple’s position as the No. 1 tablet-maker in the world.

That said, I’m not sure where the mini 3 fits into Apple’s strategy. Since the only hardware improvement to the new slate is Touch ID, the mini lineup is no longer on par with the Airs; it’s now a second-class tablet citizen. I love Touch ID, and I favor the screen size of the mini, but it’s not worth paying an extra $100 for Apple’s fingerprint sensor unless you use a ton of passwords or want to make a lot of online Apple Pay purchases. It’s still a great performer, but I can’t help but wonder if the mini lineup can remain relevant at its price point — especially now that 5.5-inch iPhones are even more portable and still offer a large screen.

If you want the latest and the greatest, however, and all the options that Touch ID does and will eventually bring, and you’re okay with spending a bit more for the privilege, the iPad mini 3 is still the best small slate available, even without significant engineering investment from Apple this year – but you have to really value the ‘small’ aspect of that to make it worth it. The iPad Air 2 is the best all around tablet, however, and a much better choice for those looking to be at the technological forefront of this market.