iOS 8 brings support for third party keyboards. This allows the user to further customize their device and they are no longer forced to use Apple’s keyboard. Now that we have been using them for a while, it would be nice to even further customize the order in which the keyboards appear. In this how to article, I will discuss how to choose the order in which the keyboards appear as well as how to disable Apple’s QuickType feature.

In order to get a third party keyboard you do have to download them from the App Store. If you have not downloaded any keyboards yet, I recommend checking up our roundup of third-party keyboards, as well as our reviews on Riffsy, Emoji ++, and One Handed Keyboard.

To change the order in which the keyboards appear, open up Settings. Then tap on General and scroll down to select Keyboard.

Up at the top it displays how many keyboards are set up on the device. In my example I have four keyboards set up. Tapping on Keyboards, shows me which keyboards I have installed, as well as enables me to add another keyboard, either a third party one I have already downloaded but did not enable, or an international keyboard.

To change the order in which the keyboards are displayed, tap on the word Edit in blue in the upper right hand corner. Tapping and holding on the three grey horizontal lines next to the name of the keyboard allows you to drag it up and down to rearrange them.

Now, if I go back to Notes, my keyboards are arranged in the order in which I choose. 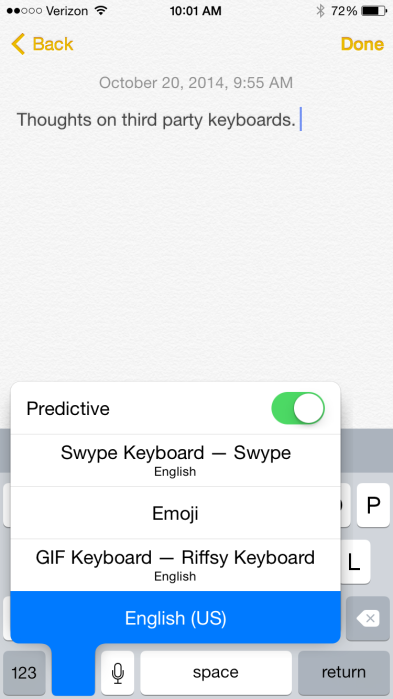 With iOS 8, Apple introduced QuickType. When using the Apple Keyboard, QuickType is the grey box above the keyboard that contains three different suggestions for your next word. It predicts what you are going to type next, based on your writing style, previous conversations, what app you are in as well as who you are communicating with. 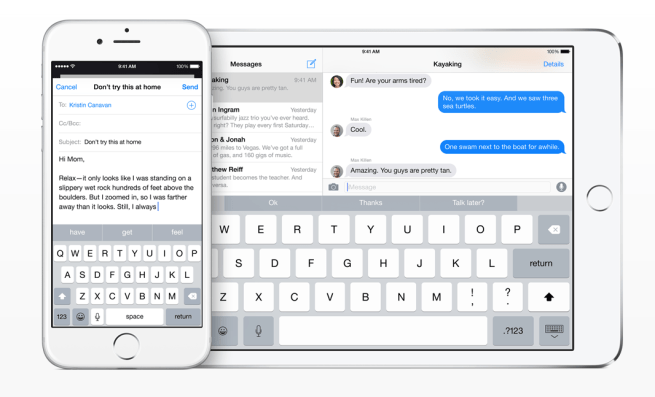 QuickType is something you can either disable temporarily or permanently. To temporarily disable QuickType, tap and hold any of the suggested words. Then drag it down until the grey box collapses and you are left with a grey line with a white line in the middle. If you want to reenable QuickType, tap and hold on the white line and then drag it up.

This is how you are able to customize the order of your keyboards as well as disable QuickType.