9to5 Guide: The best iPad stands, docks, and cases with built-in stands 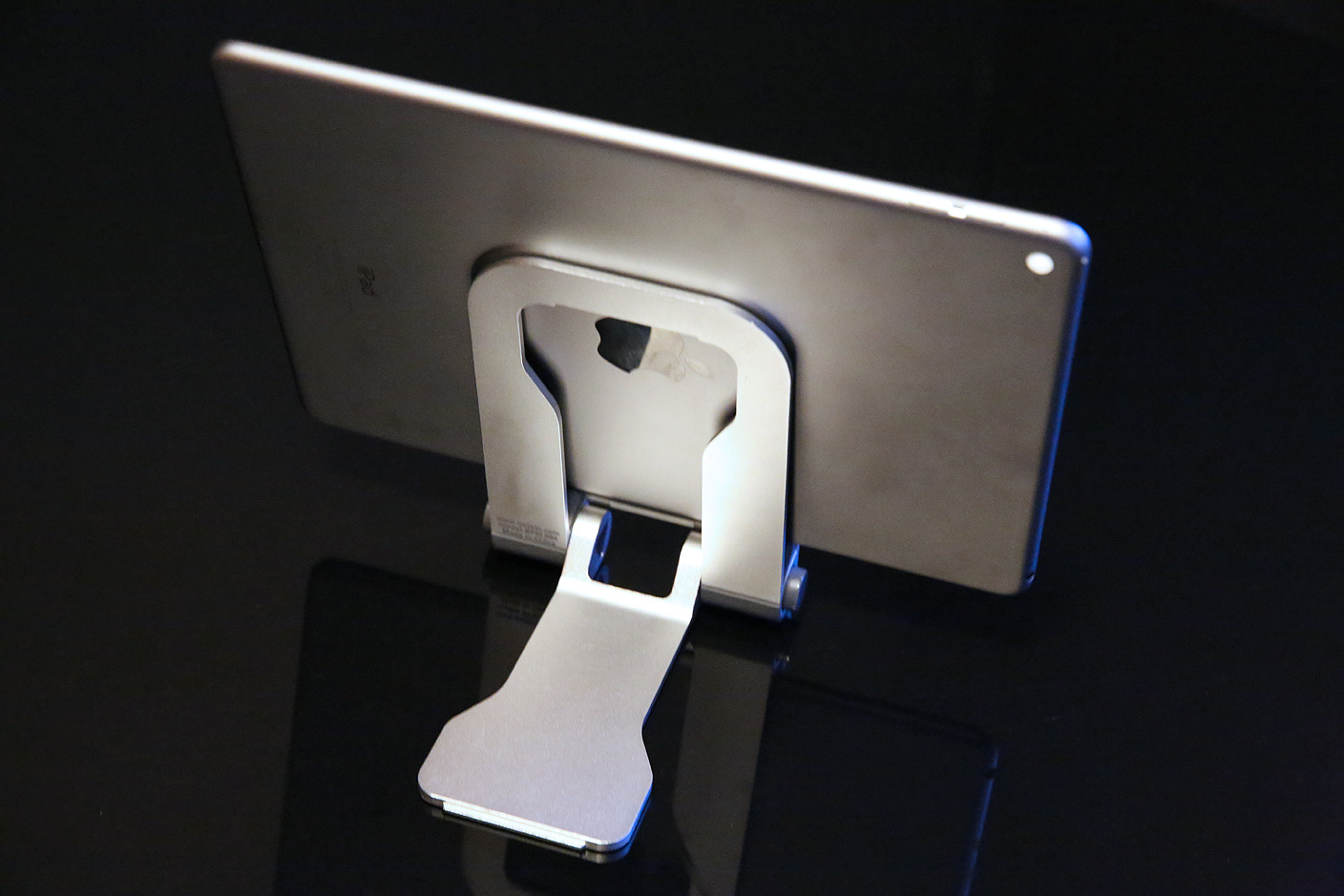 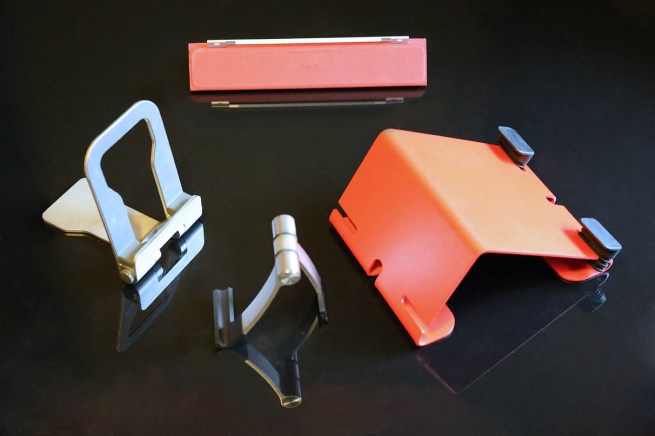 iPads need stands. Whether you’re watching videos, long-form typing, or making FaceTime calls, it’s a chore to hold the iPad upright for extended blocks of time. To address that need, Apple launched the first iPad with regular and keyboard docks, but quickly gave up on them in favor of simpler folding lids called Smart Covers. 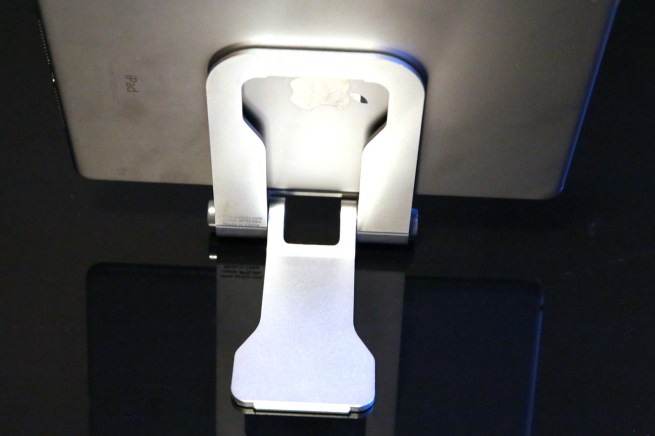 If you’re looking for an iPad stand or dock, you can do better than that. We know because we’ve tested lots of options for Apple’s tablets. Following up on our guide to iPhone 6 and iPhone 6 Plus docks, we’re looking today at the very best of what’s out there for every iPad, covering four broad categories: simple portable stands, simple desktop stands, cases with integrated stands, and charging docks.

Simple portable stands are the easiest options we can widely recommend, because they’re small, widely compatible with every iPad model, and relatively affordable. Buy one and you can use it with any iPad you own now or may own in the future, something that can’t be said about cases with integrated stands, docks, or wall mounts. 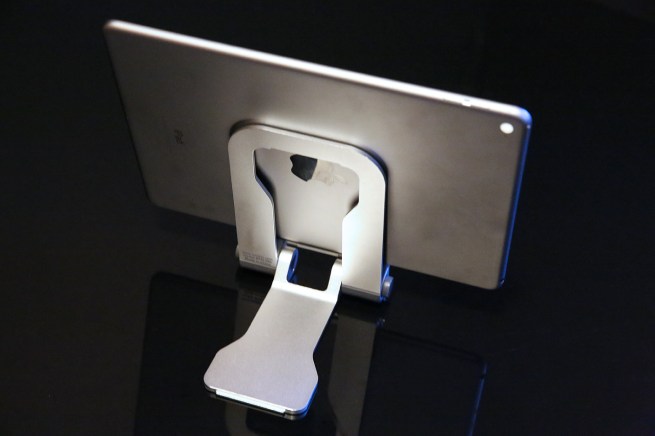 Our top portable pick is Belkin’s FlipBlade Adjust, a $30 stand made substantially from solid aluminum with iPad-safe rubber padding. FlipBlade Adjust folds down into a 3.75″ by 5.5″ by 0.13″ space, with only a sub-1″ bump at the bottom edge. It opens to support four sturdy and very different angles, ideal for everything from video to typing. It’s incredibly well-made and a great value. 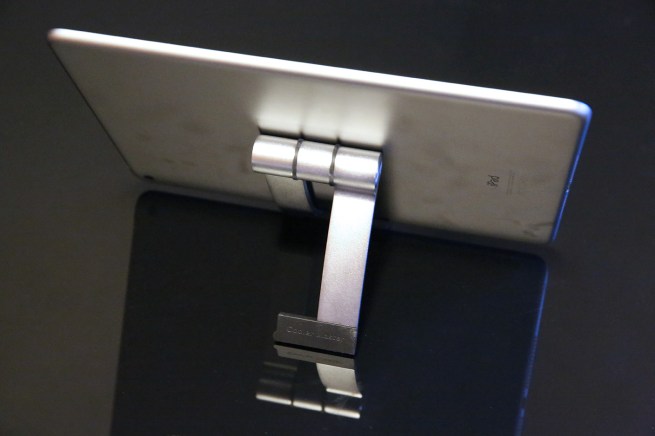 CoolerMaster’s JAS mini is also made from aluminum, and even smaller than FlipBlade at 4.4″ by 2.4″ with a 0.75″ bump. If you’re planning to use a stand only for an iPad Air, iPad mini, or an iPhone 6/6 Plus, it’s nicely-sized, but older, full-sized iPads are better off with the slightly larger FlipBlade. Five colors are available. 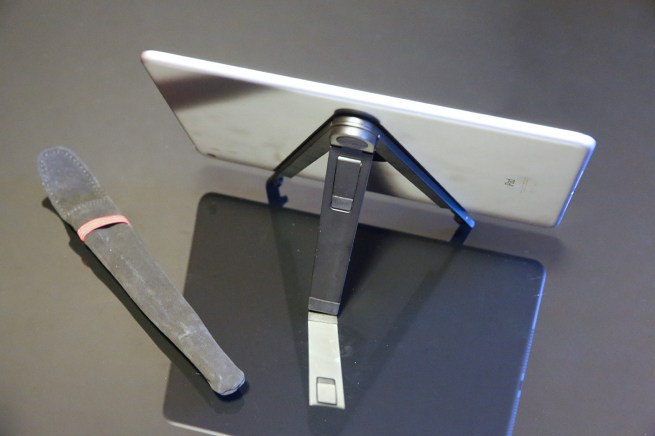 Twelve South’s Compass V2 sells for $40 and comes in three different colors. It’s different from the pack because it’s around 7.1″ tall by 1″ wide by 0.4″ thick when folded up — long and thin — while expanding into an easel-like tripod. More limited than the others in offering full support for only two angles, it’s made from heavy steel, and between its substantial weight and moving parts is weirdly fun to fidget with. Compass V2 comes with a velvety carrying case. 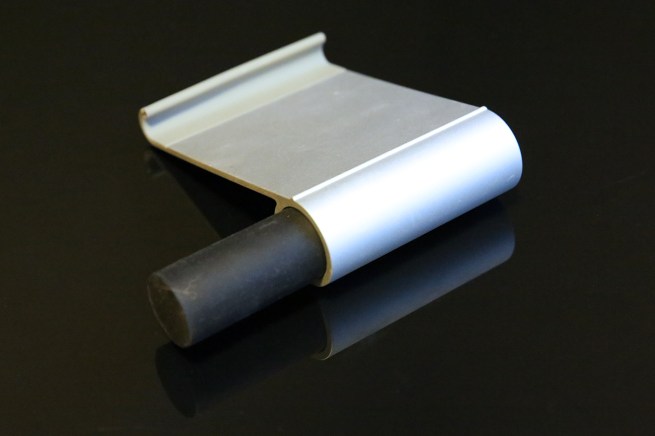 Also sold for $40, Just Mobile’s Slide was designed first and foremost to look beautiful. You can pull the silicone-covered cylinder out of its aluminum base and place it behind your iPad to hold the iPad upright. While it’s thicker than the other options at 1.2″ max around the cylinder-holding base, it has the most elegant design in the group.

Choosing a simple desktop or nightstand option for the iPad is a little trickier. You’ll need to decide whether you want to keep the iPad close to the flat surface it’s on, or elevate it somewhat. An elevated iPad can easily be charged in portrait orientation using your favorite cable, while landscape charging works at any height. 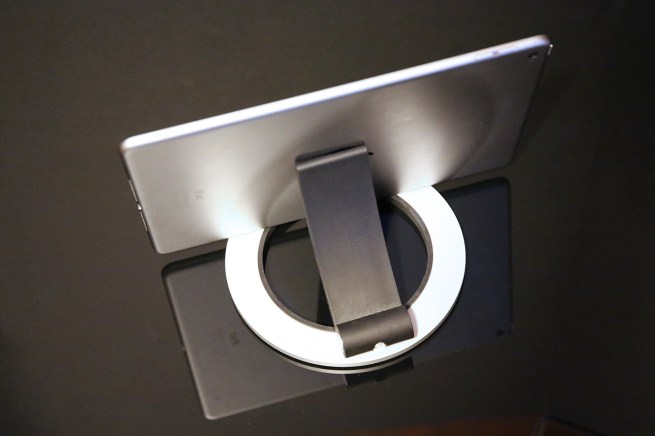 The best non-portable iPad stand we’ve tested is Just Mobile’s Encore, normally sold for $60 but available at Adorama for $50. Elegantly designed, Encore combines a base ring of solid aluminum with hard plastic and rubber supports, letting you choose an ideal viewing angle for videos or FaceTime calls. The shape and size are compatible with all iPads, though Encore doesn’t elevate your iPad much above a nightstand or desk. 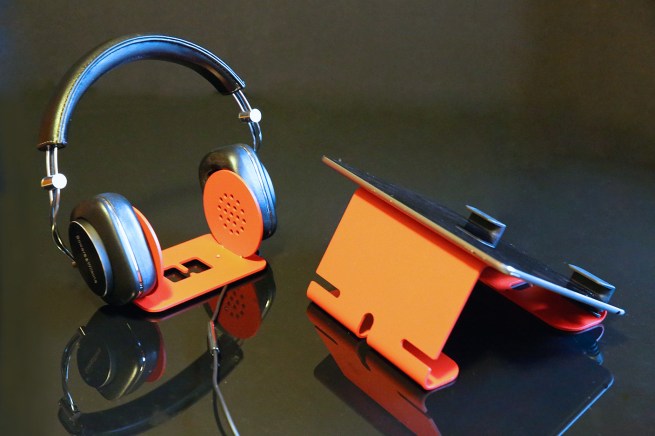 A really interesting and “Made in the USA” option is Heckler Design’s @Rest (atRest), which is made from heavy, painted steel in your choice of several colors. Now sold for only $35, the original @Rest is larger and includes rubber pads to prevent iPad scratches; the newer $29 version is smaller but still very iPad-accommodating, with enough elevated space to connect a charging cable in either iPad orientation. Its only major limitation is support for only two angles — video and typing — depending on which side you put your iPad on, but both are exceedingly sturdy. Heckler also makes a matching Headphone Stand for $30. 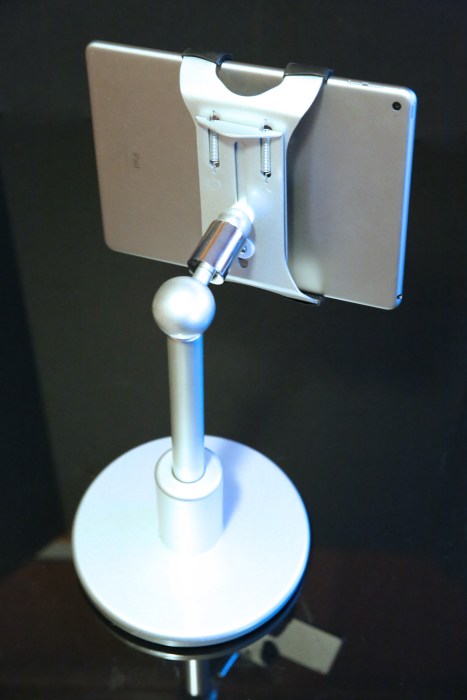 If you need something really tall to elevate your iPad up at a desk, Flote’s Orbit is the best option we’ve seen. The $130 price makes it one of the most expensive stands in this collection, but it’s heavy, big, and versatile enough to justify the price. A spring-loaded metal holder handles any iPad with rubber grips, and a magnetic ball joint lets you choose any angle you want for viewing or interaction. Expect around 9 inches of elevation above the surface Orbit’s on. 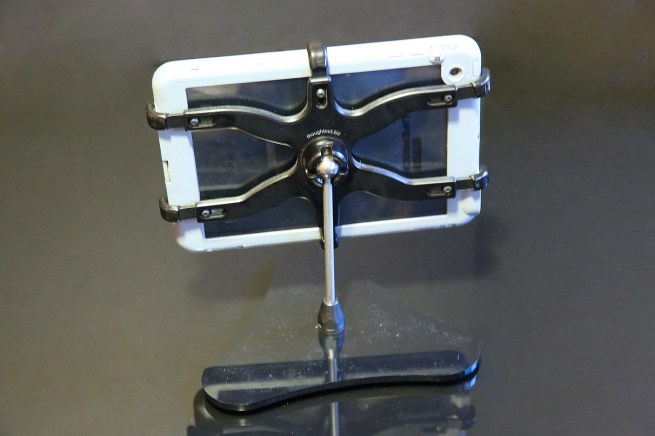 Last but not least, a company called Thought Out makes a gigantic collection of iPad stands, releasing so many new versions every year that it’s hard to keep track of them all. The $70 model in our photo is called the PED4 Planet IPM10 for iPad mini, with an adjustable, case-compatible iPad holder and a plastic base; you can detach the base and use the iPad holder on a tripod if you have one. There are versions for the iPad Air and iPhones as well in various sizes; they’re all made in the USA. 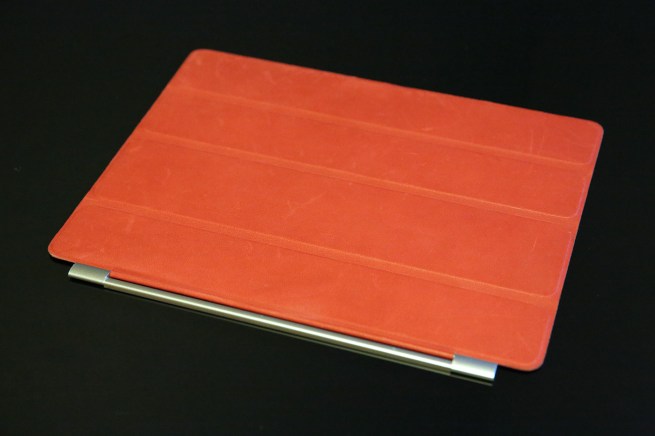 If we had to choose only one stand option for our personal iPads, it would be the type of stand that’s built directly into a case — easy to access anywhere. Although Apple refused to build a stand directly into iPads, it clearly understood the virtues of a “take it everywhere” option, because it started selling expensive iPad Smart Covers alongside the iPad 2. The original version shown here had a metal spine and was made with leather. 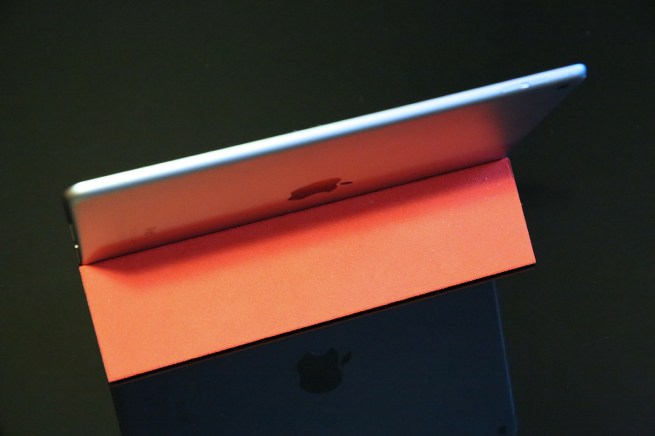 Newer versions are rubbery and have only three segments that aren’t always stable when folded into a triangular stand. We’re not huge fans of the design, but some people like it. 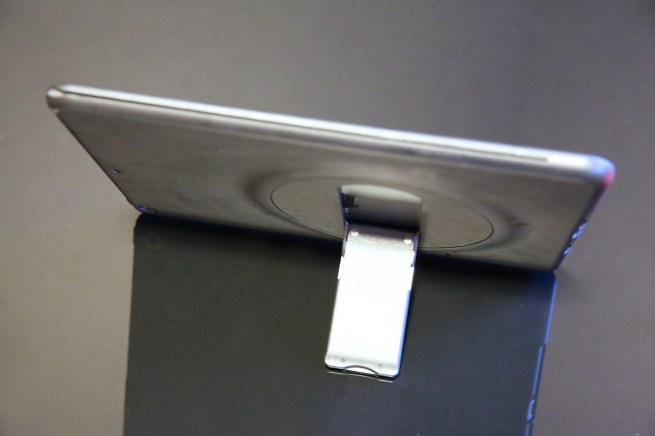 A hugely better alternative is ZeroChroma’s Folio-Slide Case, currently available for the iPad Air (shown) and iPad mini (virtually identical), each sold for $70. Folio-Slide is our #1 case of choice for iPads, featuring a slim-line hard plastic stand that ratchets safely into virtually any angle and iPad orientation you prefer. 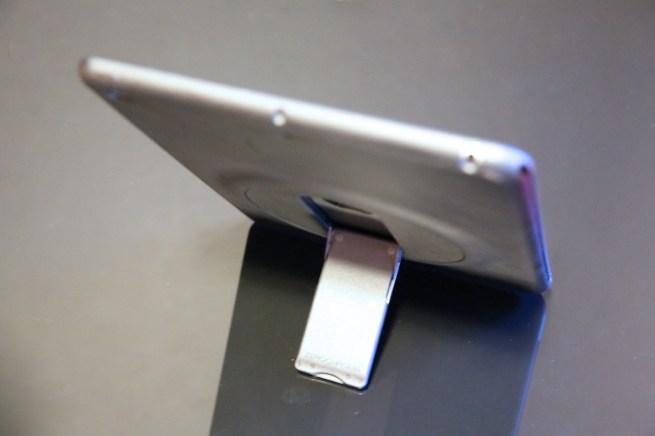 We’ve used every generation of this combination case and stand, and feel confident in saying that there’s nothing better on the market. Folio-Slide comes with a blessedly detachable front lid, while a sub-$50 version called Vario-SC (iPad Air, iPad mini) lacks screen and left side protection, but is otherwise great. You can take these cases anywhere and feel confident in the protection they offer your tablet; we’ve taken them around the world and never had an issue with them. No version is yet available for the iPad Air 2, but the Retina iPad mini model fits the iPad mini 2 and iPad mini 3. 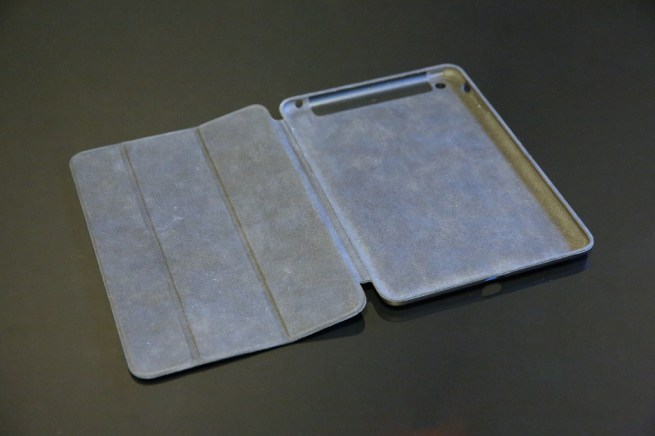 If you really like Apple’s iPad Smart Cover and are willing to pay a premium for a matching case, the leather iPad Air Smart Case, iPad Air 2 Smart Case, and iPad mini Smart Case all have the same basic design and are available at lower prices than Apple’s. We strongly prefer cases without full-time lids, but if you like the added front protection and don’t mind the single-position, occasionally unstable pyramid stand, the Smart Cases look and feel great. 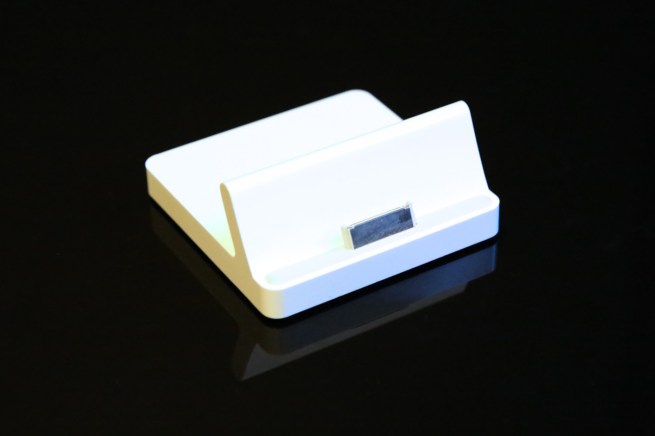 The first iPad charging dock on the market was Apple’s original iPad Dock, which was followed a year later by the similar iPad 2 Dock — then abandoned. This is what it looked like: a white plastic dock with heavy zinc inside to weigh it down. Completely incompatible with cases, it had a Dock Connector plug built-in for charging, and an audio-out port on the back. Only one viewing angle is supported. 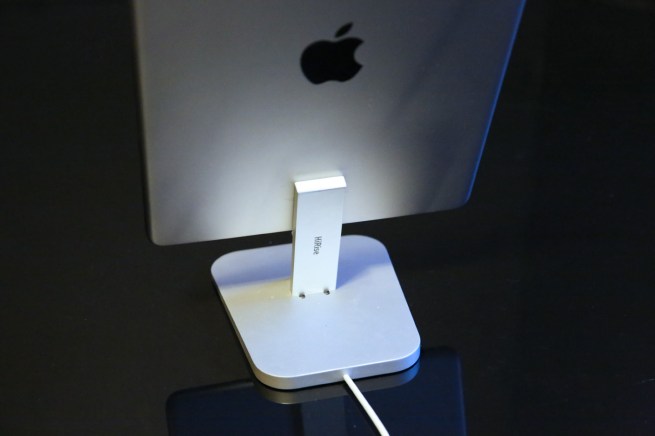 Twelve South’s $35 HiRise + $60 HiRise Deluxe combine the elegance of Apple’s iPad Dock with a mostly aluminum aesthetic. While the basic HiRise model doesn’t include the Lightning cable you’ll need for iPad mounting and charging, Deluxe ships with a Lightning cable and other improvements that make it worth the premium. It’s also the rare iPad stand available in gold, though like the classic iPad Dock, there isn’t much support for various viewing angles. 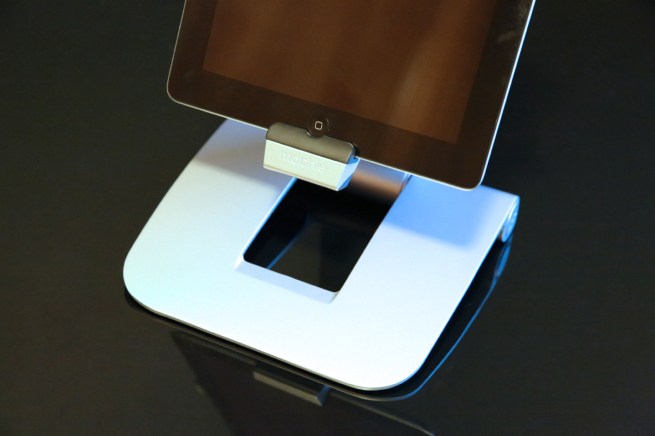 Battery maker Mophie entered the iPad market in a big way with the $150 PowerStand. The original version had a Dock Connector built in and was compatible with the original iPads – generations 1 to 3. It’s the exceedingly rare iPad charging solution that can work on landscape or portrait orientations. 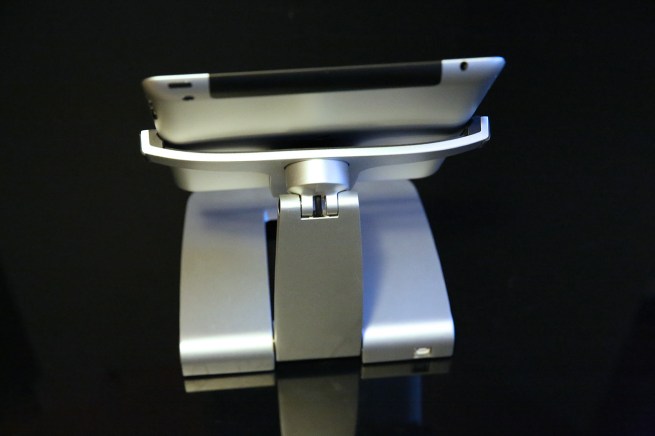 A more obscure version of the PowerStand was later released for the fourth-generation iPad. They’re nice, solidly built, and highly adjustable, but very expensive and not designed to work with most of the current iPad lineup. 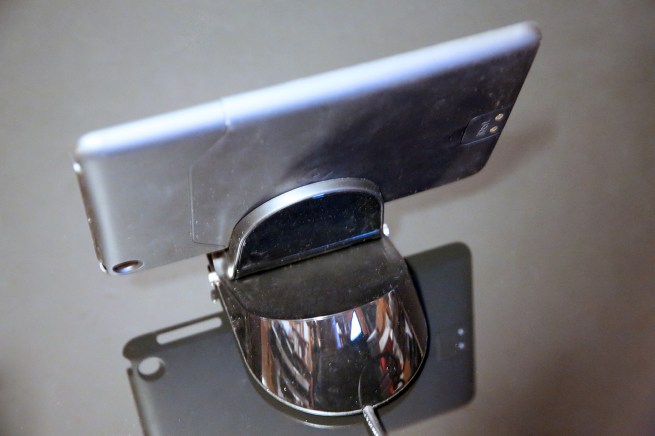 We’re big fans of Dana Innovations’ iPort Charge Case and Stand for iPad mini. Normally $130, the set includes a charging dock and stand that can be left at your desk, and an inductive charging case for the iPad mini that’s also very protective. Between the stand’s adjustability and the super-simple recharging solution, it’s a seriously cool option, though on the expensive side relative to our other picks.

There are many other options on the market, but the ones we’ve picked above are top choices for value, quality, looks, and performance. Any of our recommended stands will help you make better use of your iPad, and definitely save you from hours of hand strain in the process.