Apple’s stock soared the day after the company reported its record breaking quarter with over $74 billion in revenue and more than 74 million iPhones sold, and now Apple’s stock has reached a new all-time high during trading. The company briefly touched on $120/share during trading this morning and is on track to break its previous record closing high soon. AAPL set its previous record high of $119.75 in late November after the announcements of the iPhone 6 and iPhone 6 Plus in September alongside the reveal of the Apple Watch; the company also released new iPads in October. Apple’s current highest closing price measures in at $119, just under its trading high reached today.

Apple CEO Tim Cook spoke earlier this week during the company’s quarterly conference call on the company’s record iPhone sales while adding that the company is optimistic about continued growth in the future. The Apple CEO also offered a more specific timetable for the release of the Apple Watch, specifying that the Watch development puts it on track to be released in April. Previously the company only promised ‘early 2015’, which Cook said to Apple includes the first four months of the year. 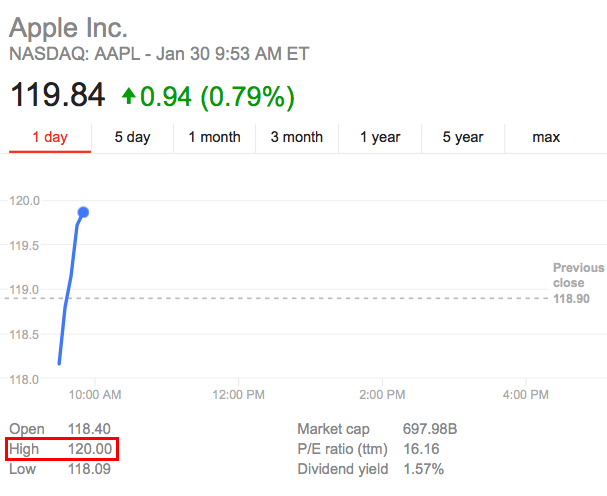