Obama after sneak peek at original iPhone: ‘If it were legal, I would buy a boatload of Apple stock. This thing is going to be really big’ 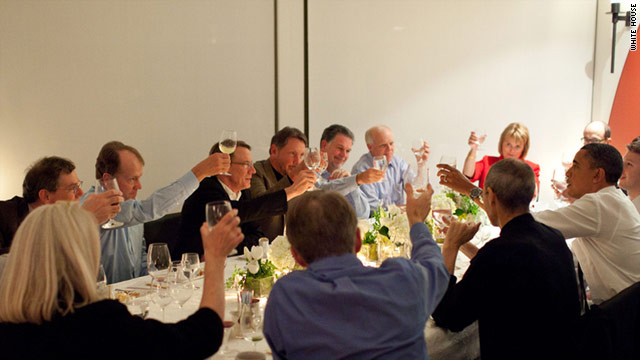 From the upcoming book Believer, US President Barack Obama’s Chief campaign advisor David Axelrod gives a small tidbit on a meeting Obama had before he became president. He called it:

In 2007, Obama got a sneak peek at the iPhone during a private meeting with Apple’s Steve Jobs. “If it were legal, I would buy a boatload of Apple stock. This thing is going to be really big,” Obama said after the meeting.

AAPL stock was selling at a split adjusted $12-14 a share in early 2007 so if he would have done quite well if it hadn’t been illegal.

Not everybody was impressed with the iPhone in its original form. Microsoft’s then CEO Steve Ballmer dismissed it in a famous rant after the launch:

One person who did ‘get it’ immediately was Google’s Andy Rubin who shifted Android strategy completely (according to a book by Fred Vogelstein) after the launch.

He was in a cab in Las Vegas, watching a webcast of the presentation. He made the driver pull over so he could see the whole thing. He said, “Holy crap, I guess we’re not going to launch that phone.”

Obama had a few other meetings with Jobs before his death including the famous ‘Silicon Valley Summit’ pictured above.

Now, if you haven’t already, please go down to the comments and release a bunch of frustration into a pro/anti Obama rage that has nothing to do with this story.