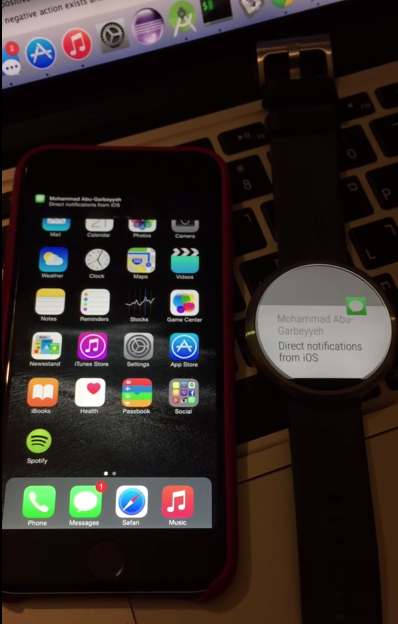 Android Wear is great, but if you’re an iOS user, it looks like the Apple Watch is going to be your only option for a while. Google has yet to make any of Android Wear’s functionality compatible with Apple’s operating system, and it doesn’t look like they plan to do so any time soon. But that’s not stopping one developer, Mohammad Abu-Garbeyyeh, from hacking Android Wear to at least support notifications from iOS devices.

While one might presume that this requires a jailbroken device to work, that’s actually not true. According to the video description, it works the same way a Pebble does, using Apple’s official APIs to send notifications over Bluetooth LE.  But while this wouldn’t require any modifications on the iOS side, there’s almost surely a modified version of Android Wear running on the watch. The developer posted a video of the hack in action, and there’s no reason not to believe it’s legitimate considering this guy is known for his modules made for the Xposed framework:

Notably, getting notifications to show up on an Android Wear device is only the first step toward these watches working with iOS. Getting other things to work, like apps, syncing of health data, and Google Now, would require a lot more tinkering—and likely wouldn’t be possible without a jailbreak. So even if this modification was readily available, I wouldn’t run out to the store and buy a Moto 360 just yet.