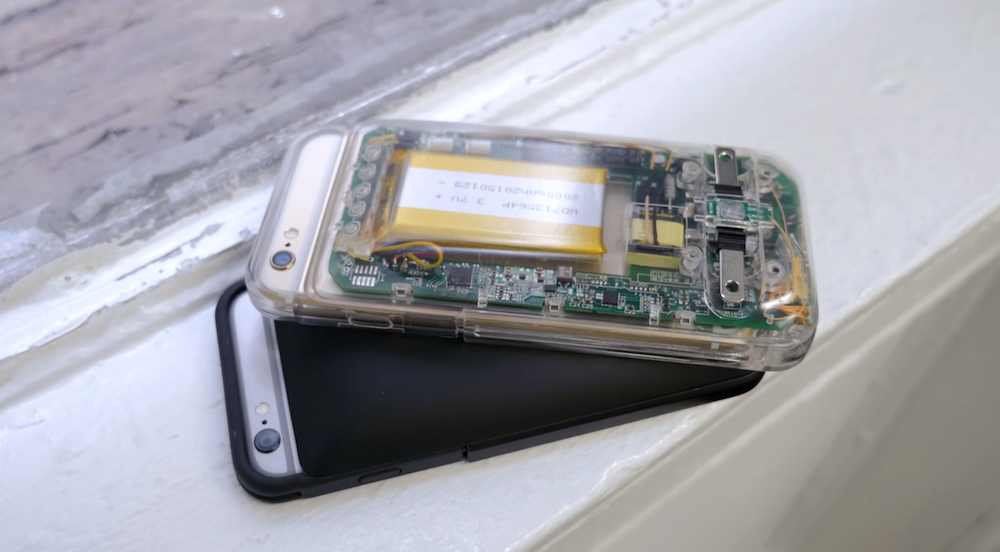 There are a ton of power accessories on the market for iPhone that it’s almost difficult to tell them apart. They all fit a ton of battery power in a case, but they are all pretty much the same, except for one.

Prong has recently launched a new Indiegogo campaign for its new PWR case for iPhone 6. Not only does this case have a built-in battery pack, it also features a power supply as well. This means you could get away with never using a cable again to charge up your iPhone…

Prong’s PWR case isn’t the first of its kind from the company. Originally Prong successfully funded its PocketPlug case back in 2012 that featured a built-in power supply with no battery pack. Later on, the company released an iPhone 5/5s version of the PWR case (available now), but today they have launched a campaign to fund the PWR case for iPhone 6.

As mentioned, this case includes a charger which is built into the backside of the case itself. All you need to do is pop out the prongs on the back and plug it into a wall for charging on-the-go. The 2,300 mAh battery inside of the case will charge up along with your iPhone 6. If that wasn’t enough, the iPhone can actually be removed from the battery pack while it’s charging, but still be protected in its own case that fits snugly within the battery pack portion of the PWR case when in use.

Check out our PWR case for iPhone 6 hands-on video for a detailed look:

The PWR case also includes a micro USB port for charging up the battery pack and iPhone if you choose to use it. Along with that, there’s a power button to switch on/off the battery output from the case, an opening for the 3.5mm headphone jack, and a power indicator which can be seen from both sides of the case when in use or charging. The power indicator is activated with a tap/hold on the capacitive button on the back side, which will illuminate the LED lights on the back and inside of the case.

Overall, this is a pretty clever case that not only will save you from the hassles that come along with using a cable, but also keep you protected and juiced up throughout the day. For a detailed look at Prong’s PWR case for iPhone 6, check out the above video. This case is available on Prong’s Indiegogo campaign page for $80 and will be available in a wide variety of colors, but there are some early bird pricing specials available if you act fast.