Apple Watch is launching in April, and Apple just scheduled a March 9th press event where it is expected to give it a proper introduction, but between those two dates Swiss watchmakers will finally unveil their own smartwatches that will likely compete with Apple’s high-end Apple Watch collection. 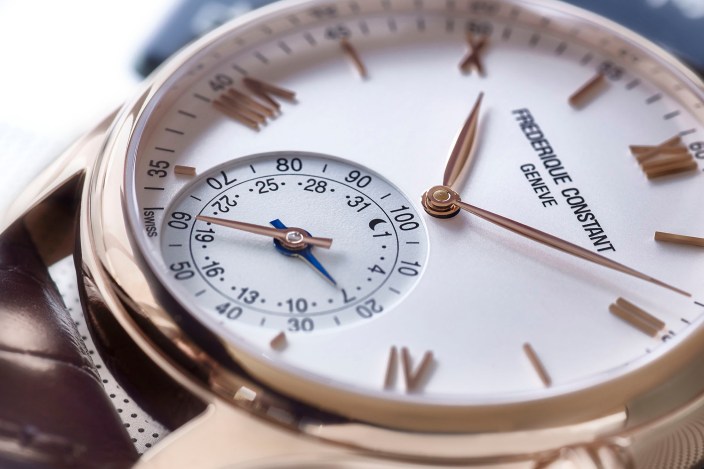 The first two watches announced come from Swiss watch brands Frederique Constant and Alpina (via Bloomberg). The parent company of the brands, Union Horlogère Holding, has teamed up with Fullpower Technologies, the company behind tech in Jawbone, Nike Fuelband, and other wearables, to give their luxury wristwatches fitness smarts. The watches will be marketed as Swiss Horological Smartwatches and offer features closer to a fitness tracking wearable opposed to a full-on smartphone-like experience that the Apple Watch and others aim to offer. The watches will pair with a companion smartphone app, but don’t have a display of their own.

While Swiss-made and from reputable watchamkers, pricing will reportedly start on the low-end for luxury swiss watches at around $1000. The gold-plated Frederique Constant model (pictured right) will sell for $1300.

MMT is only showing the few models above, but it plans to unveil the full collection later this month at Baselworld, a jewelry tradeshow in Basel, Switzerland that Swiss watchmakers often use to show off their latest creations. The event just so happens to be scheduled for right before the Apple Watch launch.

Kicking off on March 19th, we expect that we might get the first glimpse at luxury, swiss-made smartwatches that could compete with Apple Watch. TAG Heuer, Swatch and other brands have already confirmed that new collections with smartwatch features are on the way. At the very least we’ll get a look at the full collection to accompany the two models unveiled by MMT above.