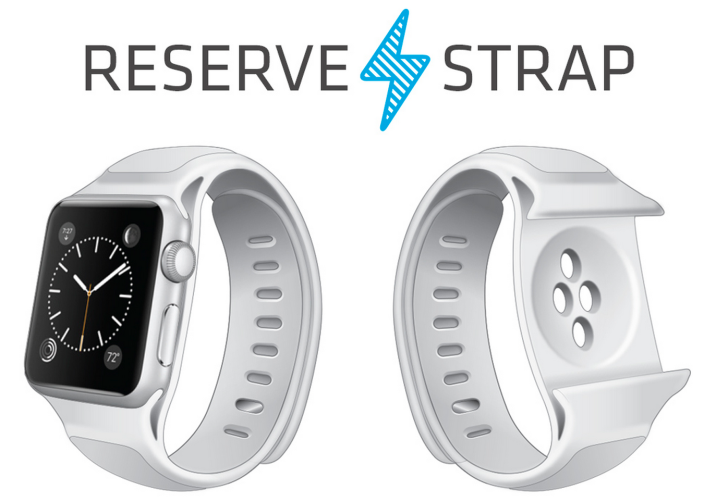 The possibility of third-party accessories for Apple Watch is still something Apple hasn’t made official, but that isn’t stopping a slew of companies from announcing products before the Apple Watch ships next month. The latest is a band accessory called Reserve Strap that aims to combat any battery life issues with a strap that includes embedded batteries to charge the device while you wear it.

The possibility of such an accessory has been a source of conversation, especially after the recently introduced Pebble Time smart watch was announced alongside a smart bands platform for creating similar accessories.

It’s clear the Reserve Strap is still an early prototype, but it does give us a look at what type of accessories might be available for the device. Here’s what the company told us about the product:

The band will have embedded batteries and utilize magnetic inductive charging similar to the new MagSafe wall charger for the Apple Watch. We don’t have hard numbers yet but based on current testing projections, we believe we will be able to increase the battery life of the Apple Watch by up to 125%.

Battery life and charging has also been a big topic of conversation for the Apple Watch that is expected to provide a day or less worth of battery life depending on use. Apple is also reportedly planning to include a “Power Reserve” mode on the device that displays only the time and conserves battery life.

The company is already taking preorders for the accessory on its website for $249. That’s $100 less than the entry-level Apple Watch itself will sell for. The company doesn’t have a timeframe for its release yet.

Other previously announced accessories in the works for Apple Watch include a handlebar bike mount, charging stands and docks, and protective cases. Apple is also planning on selling its own Apple Watch straps as separate accessories.

It’s possible Apple could announce more in the way of Apple Watch accessories at its upcoming March 9 press event.