During its Spring Forward event in San Francisco today, Apple officially took the wraps off the ultra-thin 12″ MacBook we exclusively profiled in January. With an all-new 2304×1440 resolution 12″ screen, and reengineered keyboard that runs nearly the entire width of the machine, the new MacBook has a tiny footprint, yet the thinnest screen housing ever on a Mac. A 1.1GHz version with 256GB will sell for $1,299 starting on April 10, with a $1,599 model bumping the processor to 1.2GHz and 512GB storage. A 1.3GHz version was also announced but not priced.

It’s the first fanless Mac notebook, with a miniaturized logic board only 1/3 the size of the prior 11″ MacBook Air, and most of the rest of the internal space occupied by batteries. The CPU is said to be a low-power Intel Core M processor, which can turbo-charge up to 2.9GHz in the 1.3GHz model, plus an Intel HD Graphics 5300 GPU. Apple promises 9-10 hour battery life depending on whether you’re using the web or watching iTunes videos. Apple says that it can “operate in silence.”

Measuring 13.1mm thick at its thickest point, it’s 24% thinner than the prior 11″ MacBook Air, and weighs only 2 pounds – the lightest MacBook ever. In addition to a traditional silver color, it’s being offered in gold and space gray colors for the first time in the MacBook family. The plastic antenna cover at the hinge has been replaced with aluminum, making the new MacBook the most substantially metal version yet.

An all-new keyboard required re-engineering and strategic space reductions to remain full size. Apple is using a butterfly mechanism for keys that are more precise and accurate than before, as well as thinner, with individual LEDs to backlight every key.

The touchpad incorporates Force Touch, debuted in the Apple Watch, and has the Taptic Engine built in for feedback. As predicted, it doesn’t click; there are four force sensors inside. Using OS-level software, the sensitivity can be adjusted to determine how much pressure you want the computer to detect as a “click.”

802.11ac and Bluetooth 4.0 wireless are inside, with one data port: USB-C. The reversible connector supports everything via adapters, supporting power, USB data, DisplayPort, HDMI, and VGA. A headphone port and twin noise-canceling microphones are also built in, along with a large unified speaker grille above the keys. See additional pictures after the break. 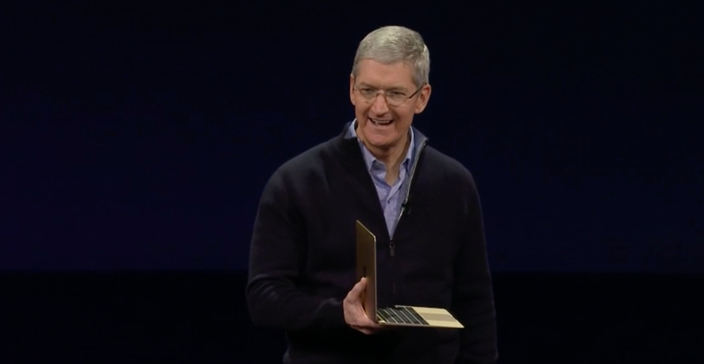