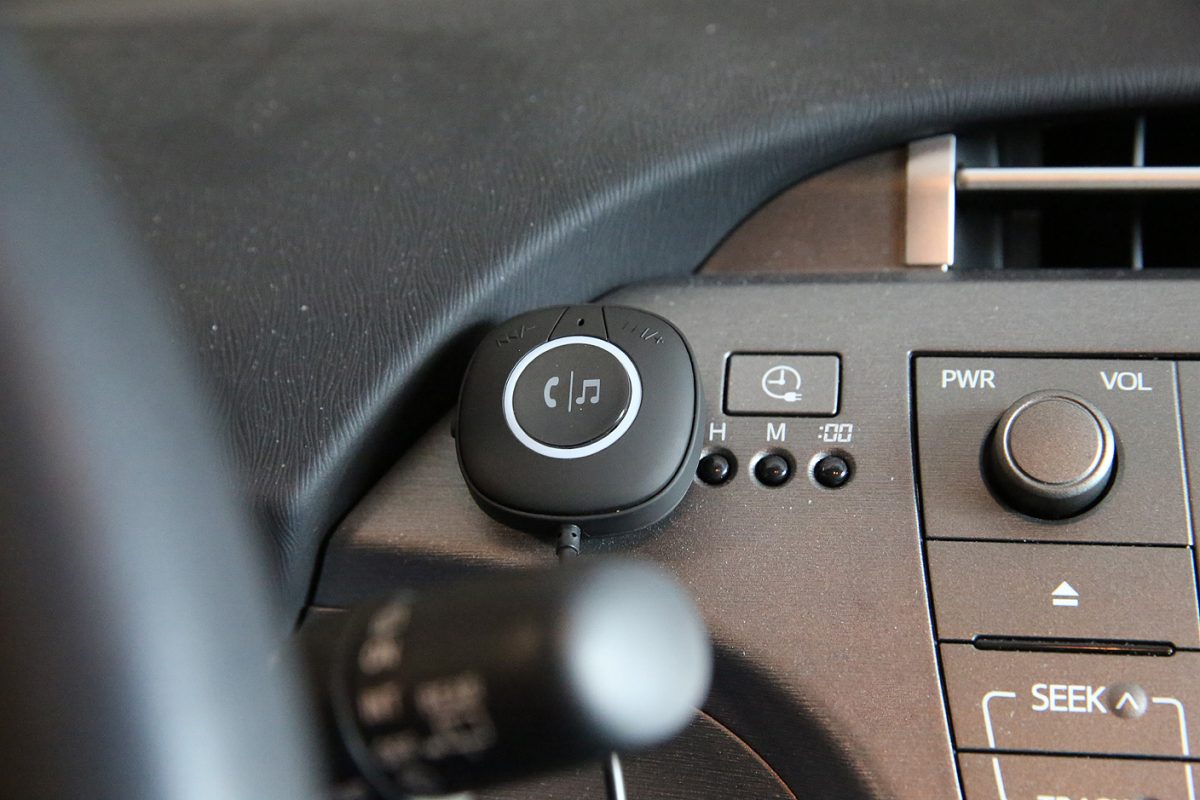 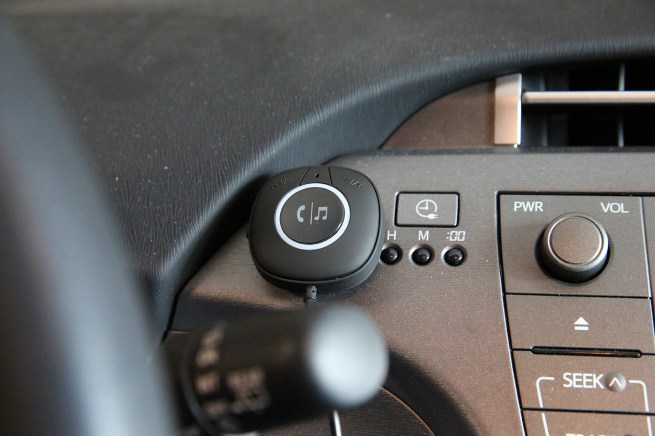 Up until recently, no one complained about the way iPhones sounded through my cars’ Bluetooth speakerphones, but after switching to an iPhone 6 Plus and a Toyota Prius, friends and family told me that ambient noise has been increasing to distracting levels during our phone calls. If it wasn’t for those complaints, I would never have thought to test an alternative such as TaoTronics’ TT-BR03 Bluetooth 4.0 Hands-Free Car Kit ($30, currently $25 on Amazon). Most cars these days include Bluetooth speakerphone and music streaming support, but this inexpensive accessory is here for cars that don’t — and for cars exhibiting weird audio-related bugs with iPhones. Judging from its 4.8/5-Star Amazon reviews across over 130 customers, plenty of people still need solutions like this for one of these reasons.

TT-BR03 combines a wired noise-cancelling microphone and three-button remote control with a car charger, using Bluetooth 4.0 and a 3.5mm audio plug to route your iPhone’s audio into a car’s speakers. If your car doesn’t have a 3.5mm aux-in port, you’re out of luck, because TT-BR03 doesn’t have a built-in speaker. But if you do have an aux port, it provides a very competent speakerphone and music streaming experience at a very low price. 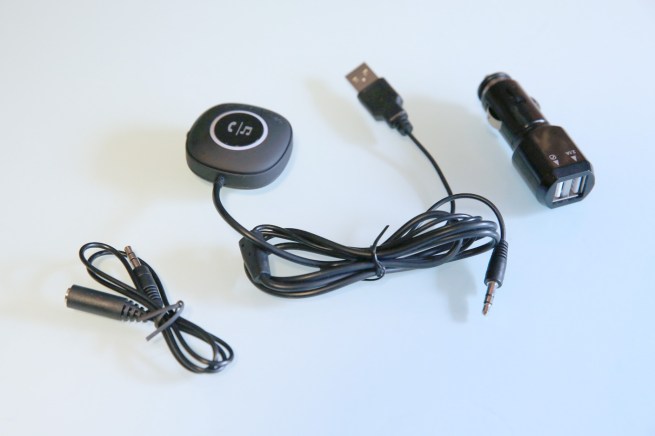 As the low price suggests, TT-BR03’s components are functional rather than fancy. The microphone and control puck is mounted with soft-padded sticky tape, and connects to a generic but dual-port USB car charger — one port for the puck, the other to recharge your iPhone at up to 2.1-Amp speeds (if you self-supply a charging cable). TaoTronics also includes a 19″ 3.5mm audio extension cable for cars that need it. Without the extension cable, I found that there was just enough wire to place the puck where it needed to be on my dashboard while connecting the unit to both my car’s aux-in audio port and an adjacent power outlet. When the mounting process was finished, everything looked OK; having cables running out of a central console to the dashboard isn’t attractive, but for a $30 solution with no need for professional installation, it’s acceptable. 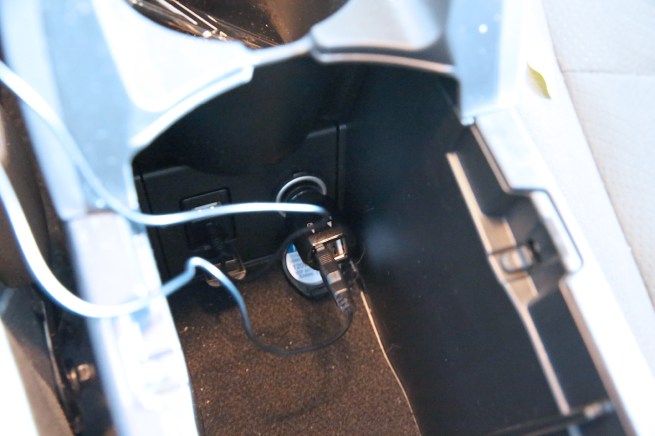 TaoTronics’ control puck includes three buttons and a side-mounted power on/off switch. Holding a track back/minus button lets you skip back through music, while tapping it reduces the volume level; a track forward and plus button operates the same way with opposite effects. The circular call/music multifunction button can be held down to mute a call, refuse a call, or initiate pairing, tapped once to start or stop calls or music, and tapped twice to redial. It cannot be used to trigger Siri, however, which means that you’ll want to keep your iPhone plugged in to use “Hey Siri” automatic voice commands instead. 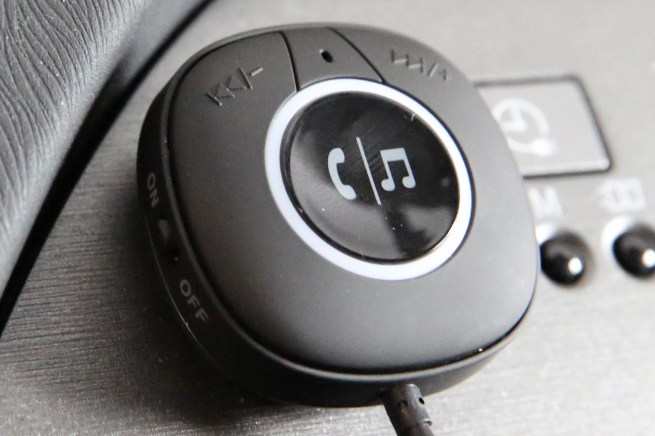 Functionally, TT-BR03 worked pretty much as expected. Initial pairing was simple, and thanks to Bluetooth 4, re-pairing is nearly instant after you turn on your car — faster than the Bluetooth system built into my Prius. While microphone placement is important to maximize sound quality, callers told me my chosen mounting location worked to produce far better results than my iPhone 6 Plus was normally getting with the car: far lower ambient noise and a much more intelligible (though slightly treble-heavy) rendition of my voice. On my side, TT-BR03’s peak volume level was lower than I would have preferred, requiring the car’s speakers to be turned up louder. And except for an occasional hiccup, as well as a reversal of the left and right stereo channels, music streaming worked just as well as with the car’s built-in Bluetooth hardware. 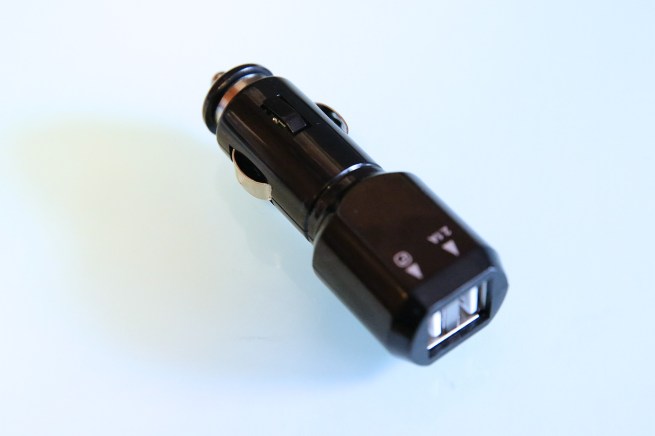 It’s been years since I last tested a Bluetooth car kit like this, and the two biggest differences I noticed were the improvements in Bluetooth 4 and the pricing. TT-BR03 demonstrates that it’s now possible to add an entirely competent speakerphone and streaming solution to any car with aux-in for a very low price, and thanks to Bluetooth 4, the speed and quality of wireless pairing may actually be better than what you’re accustomed to. So if you need to add wireless calling and music to your car, or find an alternative to a Bluetooth system that’s experiencing issues, you’ll find that TT-BR03 gets the job done without breaking the bank.