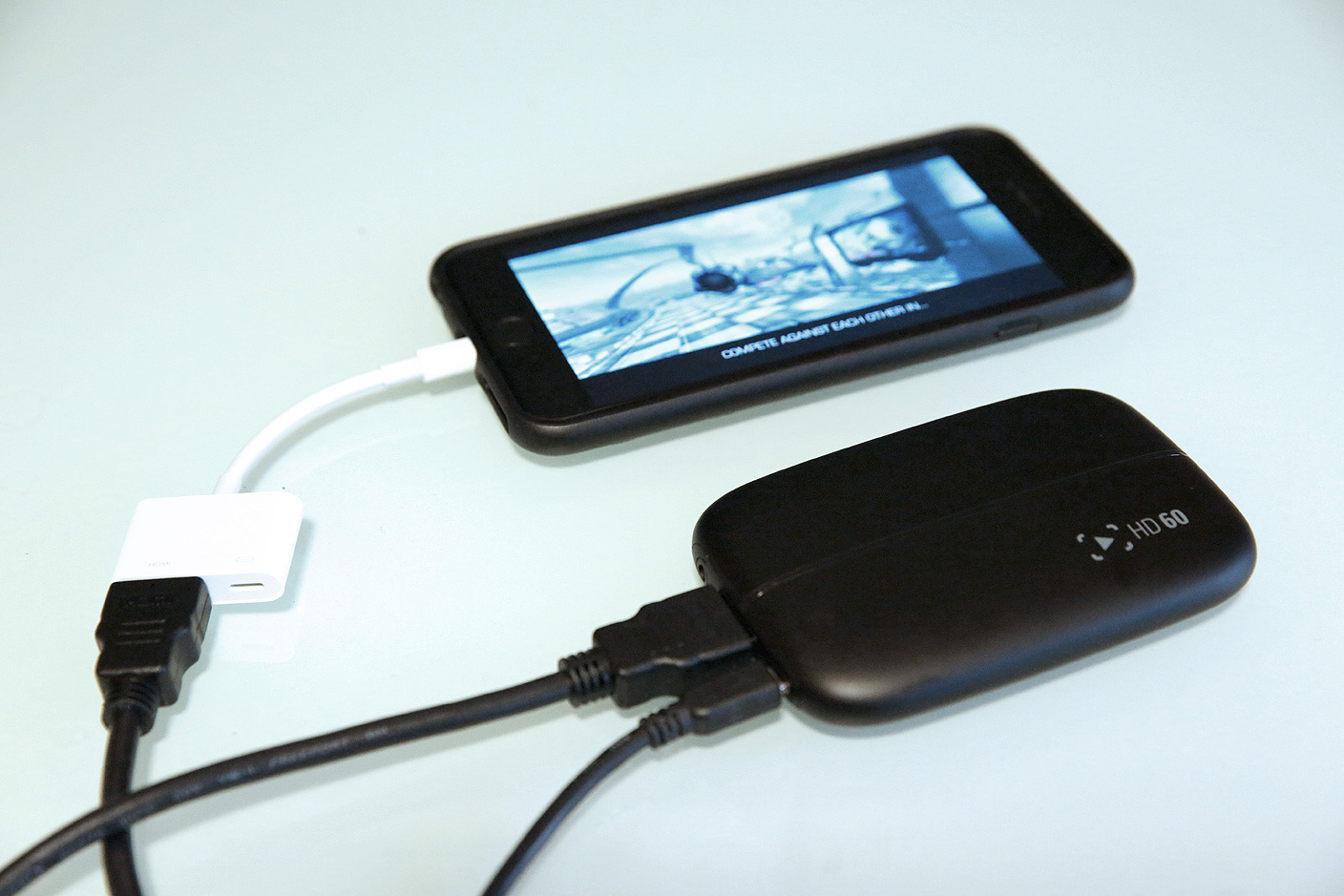 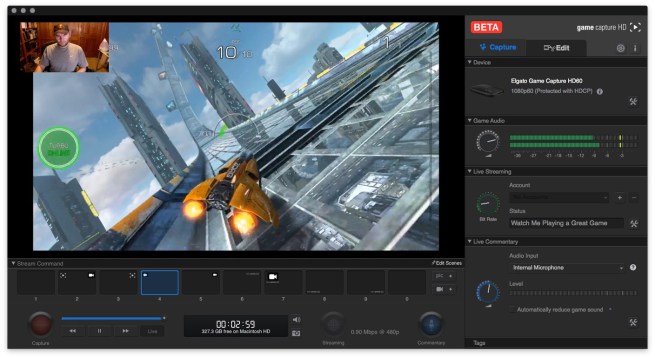 Over the past decade, video gaming became social, as voice chat, multi-player matchmaking, and live game streaming enabled gamers to share their experiences with friends and strangers online. Streaming game video was the hardest, requiring so much horsepower that consoles needed computer assistance. Elgato entered the market in 2012 with Game Capture HD, which was designed to record directly from the PlayStation 3 and Xbox 360. Now there’s a more powerful version called Game Capture HD60 ($180), which offers professional-quality full 1080p HD recording support at 60 frames per second, plus one-touch live streaming to uStream, Twitch, and YouTube. It works with iPads, iPhones and iPod touches using Apple’s Lightning to Digital AV Adapter, and Xbox One, Xbox 360, Wii U and PlayStation 4 game consoles with nothing more than an HDMI cable.

Elgato has years of experience making cutting-edge video recorders: back when Macs weren’t nearly as powerful as they are today, its EyeTV DVRs could record live TV while streaming video to iOS devices. Similarly, Game Capture HD60 lets you simultaneously enjoy lag-free gaming, stream live video to the Internet, and optionally include voice commentary with automatic audio level balancing. It also does all of these things with barely any need for user involvement. And although the price was just a little too high when it debuted last year, it’s now hovering around $150 — a great price given the quality of its video output. Read on for all the details… 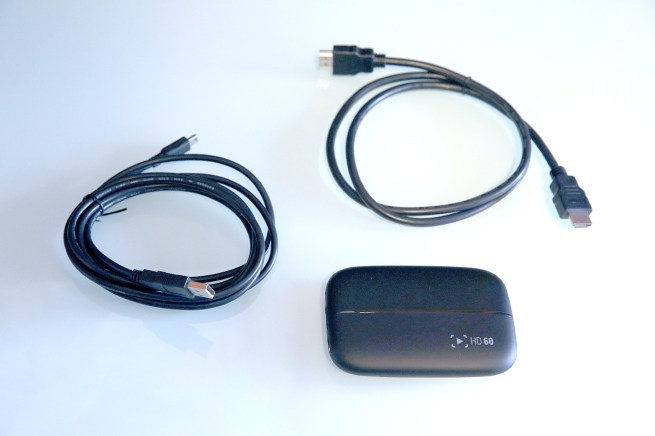 Measuring 4.3″ long by 2.9″ wide and 0.6″ thick, HD60 is roughly as small as an iPhone 4, but like the iPhone 3G, it’s curvy and made primarily from hard plastic. An included mini-USB cable connects to the USB port on any second-generation Core i5 (or newer) Mac with 4GB of ram and OS X 10.7+. You connect the included HDMI cable to one of HD60’s ports and your HDTV, then connect HD60’s second HDMI port to your console’s HDMI cable. HD60 passes through a completely clean video and audio signal from your console to your TV — instantly, without any perceptible lag — while simultaneously recording the signal identically through your Mac. This is no easy feat, as lag can trip up timing in action games.

The setup process is simpler (but a little pricier) for an iOS device. You attach Apple’s Lightning to Digital AV Adapter to your iPhone, iPad, or iPod touch, then connect Elgato’s HDMI cable to the Adapter, and the USB cable to your computer. If you’re using a recent iPhone in landscape mode, the video will output at a 16:9 ratio like most game consoles; iPads instead will display 4:3 video, just like on their screens. 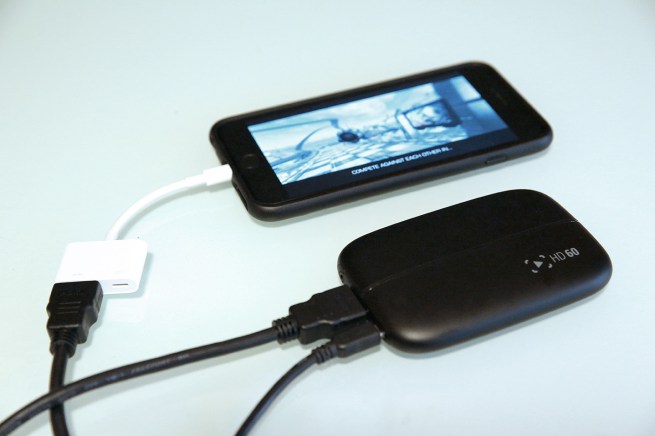 HD60 depends on a free Elgato app called Game Capture HD, currently available in a mostly stable version 2.0 and a beta version 2.1. Shown immediately below, version 2.0 shows you a nearly live feed of your game in a main pane, with optional adjustments for the game’s audio levels, streaming bitrate/resolution, and microphone commentary level in separate panes. Hidden settings let you adjust the video brightness, contrast, saturation, and hue, audio gain, Lightning- and Dock Connector-specific cropping, and TV emulation settings, which could help if you’re having issues with unsupported HDMI devices. Under most circumstances, there’s no need to use any of these settings — everything displays accurately without tinkering — but if you’re dealing with an unusually dark scene in a game, or you’re sitting at some distance from your microphone, adjusting the brightness or the gain may help. 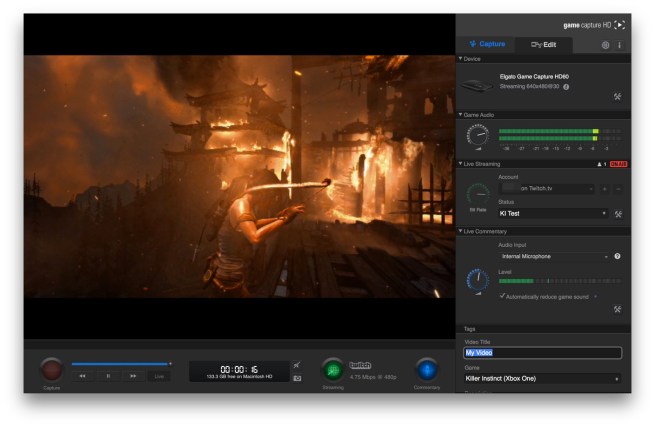 Beta version 2.1 (shown immediately below) goes a step further, enabling you to add live webcam and image overlays directly atop your video. If you want to let people see you talking while you’re playing the game, or want to add a branding element to your video stream, all you have to do is select one of 10 preconfigured layouts with an opaque webcam feed and/or a transparent image overlay. Each can be moved around and resized as you prefer. Recording is as simple as pressing a large record button at the bottom left corner; you can choose the resolution (up to 1080p) and bitrate (up to 40Mb/second) that’s best for your needs. HD60 automatically buffers an hour of footage to your hard drive, so if you need to go back and grab something you didn’t record while playing, that’s as easy as using a scrubbing timeline. A simple editor lets you splice and assemble clips if you don’t want to keep everything you’ve recorded. 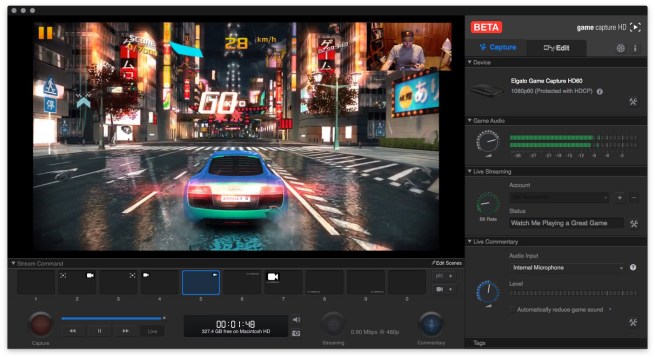 While recording game footage in 1080p at a full 60fps frame rate is impressive — something video game publications and companies previously needed ultra-expensive equipment to do — HD60’s really killer feature for most people is its ability to livestream video to Twitch, uStream, or YouTube. As just one example, Gameloft uses an HD60 to stream videos of iOS games over Twitch. While Sony built Twitch streaming directly into the PlayStation 4, HD60 enables this functionality for the Wii U, both Xboxes, iPads, iPhones, and iPod touches, and gives you more control over the video quality and output than Sony’s software. With HD60, streamed video is a mirror of what you’re playing on screen, and if you want to adjust the bitrate or resolution to enhance the smoothness or fidelity, you can do so. Beta 2.1’s webcam and logo overlay features are great, too. 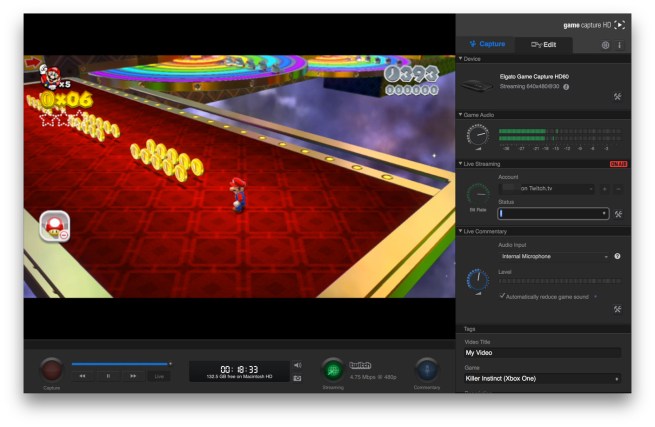 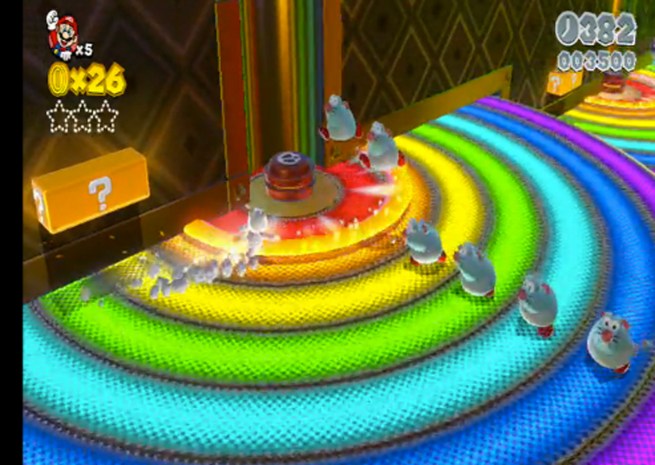 The pictures here show how HD60 does with everything from iPad and iPhone to console input, both on the display side and on the receiving side. Viewers of my test Twitch and uStream videos reported that the streams were silky smooth and looked way better in motion than the screen captures here might suggest. By contrast with the easiest alternate way of sharing Wii U videos online — namely, FaceTiming or iSight-recording a video — Elgato’s solution delivers hugely superior quality, and there’s no need to hold a camera up to your screen to record whatever’s going on in low fidelity. Being able to broadcast great-looking videos with so little lag to so many people at once is also pretty incredible. 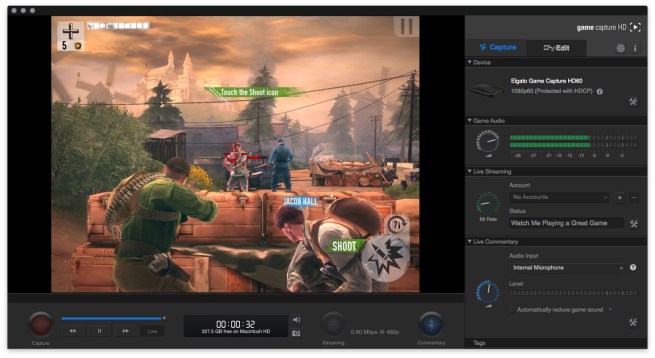 I only experienced a couple of hiccups during testing — one Wii U stream had some video glitches that disappeared when I reset the software, and the app crashed a couple of times when I began to play with settings after finishing a stream. But for the most part, Elgato’s Game Capture software ran smoothly, and its ease of use is unparalleled. Even though Apple added an audio ducking feature in GarageBand years ago, auto-adjusting audio levels to balance a voiceover against background sound, I really liked the fact that HD60 automatically handles microphone audio input so well for realtime commentary.

Xbox One screenshot taken from uStream

Elgato has been a great Mac developer for a very long time, and it’s great to see it offering consumer-grade USB-compatible solutions alongside its pro-class Thunderbolt accessories. Game Capture HD60 uses equally powerful hardware along with impressively streamlined software to create an impressively easy recording and streaming solution for gamers. Not everyone will have a use for game streaming and recording technology like this, but if you’re one of the increasing number of people who do, definitely consider what HD60 brings to the table.