Review: Is the added protection of the LifeProof Nüüd for iPhone 6 worth the trade-offs?

LifeProof has become a household name in the iPhone accessory world since debuting its first ultra-protective case in 2011. The company has continued improving its waterproof cases with each new version of the iPhone. With the iPhone 5, LifeProof introduced its Nüüd series, which offers protection from water, snow, dirt, and shock while still exposing the display. We took a look at it last summer, noting that its an excellent choice for the adventurous iPhone user, albeit a bit bulky. It’s still available for $48.

With the iPhone 6, Apple presented LifeProof with a new challenge. The large, thin form factor of the iPhone 6 meant that LifeProof would have to work incredibly hard to develop a case that maintained a manageable form factor, while offering the same protection that users of the case have come to expect. We reviewed the LifeProof Fre for the iPhone 6 earlier this year and pointed out that it was a well thought out option, but that the Nüüd model would be very much welcomed. I’ve recently been testing the LifeProof Nüüd case for the iPhone 6. Here’s what you need to know:

Using the LifeProof Nüüd as someone who generally does not use any sort of case has been a challenge. When I do use a case, I use a thin, plastic offering such as this one that merely protects my phone from scratches. With that said, I was able to get used to the added size and bulk of the case after a week’s usage. More than anything, it is hard using the device with one hand, which is often a complaint associated with the iPhone 6 to begin with and the added size of the LifeProof Nüüd doesn’t make it easier.

The design of the LifeProof Nüüd for the iPhone 6 is about as basic as it gets. The case is offered in black, blue, pink, and white. I’ve been using the black one during my testing. The back of the case is transparent, meaning that the Apple logo and branding is still visible through the case. All of the buttons and ports are covered by flaps, while the headphone port is hidden behind an attached screw mechanism. The Touch ID home button is hidden behind a thin piece of plastic, although it’s still functional.

As expected, the added water, dirt, shock, and snow proofing of the LifeProof Nüüd means there are design drawbacks. For instance, the mute switch functionality is reversed when you have the case on your device. This means that flipping the switch towards you puts your device on silent, while pushing it away from you turns the sound on. It’s an annoyance at first but an easy adjustment.

The Lightning port at the bottom of the iPhone is covered by a plastic guard that easily opens and closes for charging. If you use Apple’s Lightning cable then you shouldn’t have any problem fitting the cable through the case, but third-party cables may run into issues as the cutout is incredibly narrow.

Perhaps the most annoying design sacrifice comes with the headphone port. To access the port you have to unscrew the cover, which is attached to the case. In the box with the LifeProof Nüüd is a headphone adapter that allows you to use any headphones you want with the case, because on its own, the port on the case is too small for anything except Apple’s EarPods. For me, this is annoying because I have three different pairs of headphones and an auxiliary cable that I regularly use with my iPhone. I had to constantly remind myself to grab the adapter for the Nüüd if I wanted to be able to listen to music while using the case. I do, however, love the thought that went into attaching the headphone port cover to the case.

I greatly enjoy that the screen of my iPhone 6 is still exposed when I use the LifeProof Nüüd. I am not at all a fan of screen protectors, and that was always my primary reason for not using a LifeProof Fre. With the Nüüd, however, the iPhone 6’s full 4.7-inch display is still exposed in its entirety and that’s a huge benefit for the case. (Hence the name: “Nüüd”.) 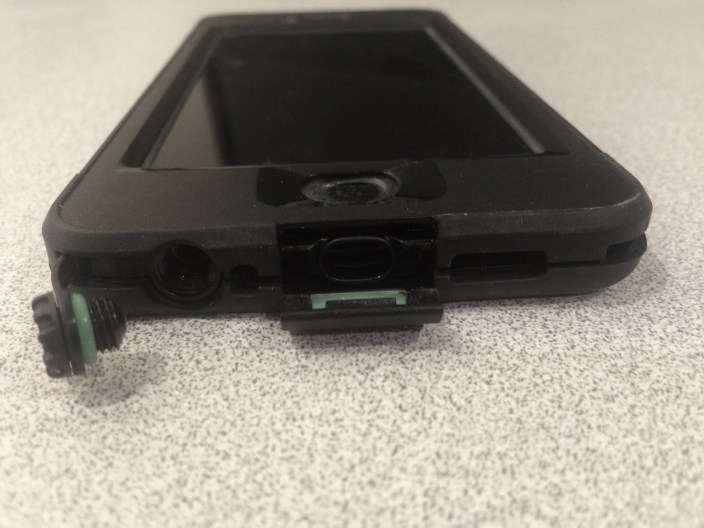 To ensure that the LifeProof Nüüd was totally resistant to a variety of conditions, the company had to protect the speakers, microphone, and cameras of the iPhone. Unfortunately, this means that speaker quality is somewhat muffled. There is a notable difference between listening to something via the iPhone 6 without a LifeProof Nüüd case and with the case. To LifeProof’s credit, the speaker quality has been improved greatly from its iPhone 5/5s versions, but it’s still not perfect.

At high volumes, especially when listening to music or watching a video, you’ll certainly hear some crackling of audio. As far as voice calls go, the audio sounds relatively normal for the user with the LifeProof Nüüd case, but the caller on the other end will notice some distortion in voice quality. In my testing, the person I was calling didn’t notice a hindering amount of distortion when I was using the LifeProof Nüüd, but the quality of my voice was clearly poorer than without the case.

While I didn’t push the limits when it comes to the LifeProof Nüüd’s protection claims, I did put it through some light testing. I used the device in the shower several times, with it being splashed and sprayed with a decent amount of water. When I removed the case, I did not notice droplets of liquid that had seeped through onto the phone itself. I also submerged my iPhone 6 into a bucket of water while using the LifeProof Nüüd and it came out perfectly dry. As for the shock resistant feature, I dropped my device a few times from a moderate height onto my concrete driveway and it emerged without a scratch.

Does the added protection make the LifeProof Nüüd worth the sacrifices?

I’ve always been skeptical of cases. Especially cases that add unnecessary size and bulk to my iPhone. The difference with the LifeProof Nüüd, however, is that the size and bulk are necessary to make the case as tough as possible. The question is, are the many protection qualities of the LifeProof worth the design trade-offs and sacrifices. For me the answer is yes.

There’s no better feeling than not having to worry about babying your iPhone 6 at every moment and the LifeProof Nüüd offers that from the second you put the case on your phone. You no longer have to fear that your phone could fall out of your pocket at any given time and lose the pristine design that everyone loves so much. Of course there are drawbacks to the using the LifeProof Nüüd for the iPhone 6, but if you value the benefit of protection from the elements they are worth it.

The LifeProof Nüüd for iPhone 6 is available directly from the company for $89.99 and on Amazon for slightly less.