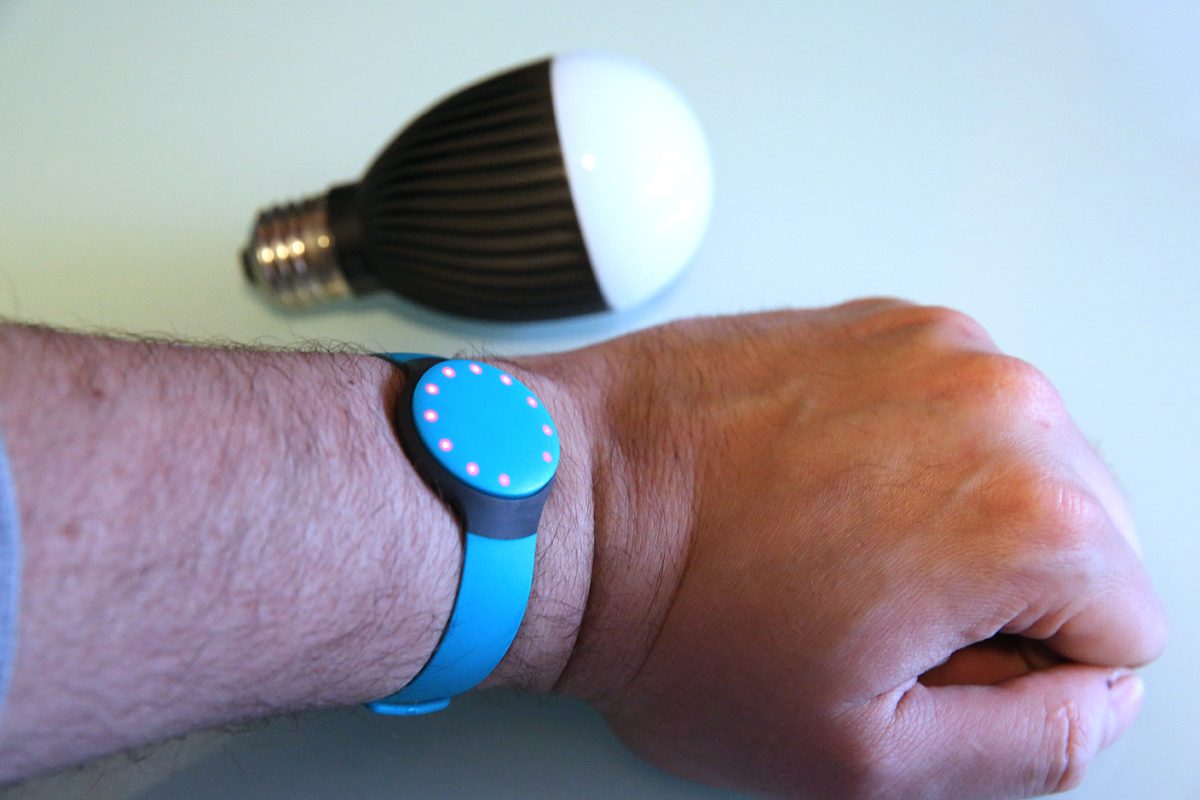 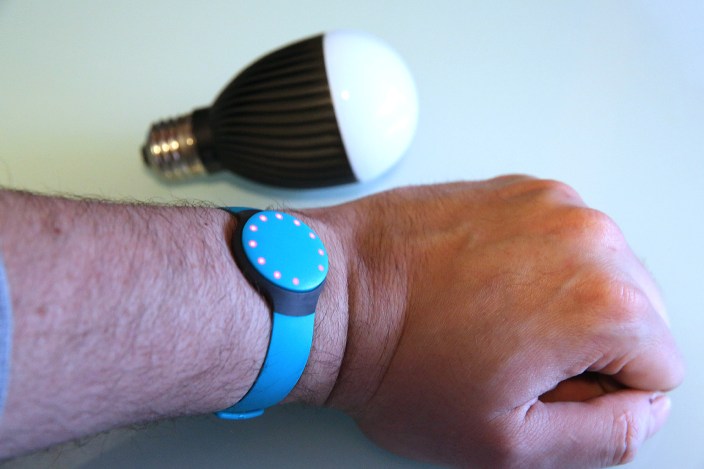 Two of the hottest product categories at this year’s CES were home automation and wearables, which Apple is now tackling with HomeKit and the Apple Watch. As has historically been the case, the price premiums Apple has set for its products have left plenty of room for more affordable alternatives. Misfit, a company co-founded by former Apple CEO John Sculley, is now competing in both categories: the just-released Bolt Wireless LED Smart Light Bulb ($50) joins a small collection of Bluetooth-controlled lights, while its late 2014 wearable fitness and sleep tracker Flash ($33-$50) is in the process of being upgraded to control Bolt.

Misfit’s pitch for Bolt is interesting. It’s billing the color-shifting bulb as producing “gallery-quality light,” and focusing its new Misfit Home app for iOS on creating “Lightscapes” — lighting scenarios including neutral bright white, warm sunrises and sunsets, candlelight, forest and volcanic tones, amongst other “scenes” where the color is set but the brightness is adjustable. When Bolt works, it’s a wonderful source of light, but as is common these days, some post-release tweaks will be needed to exploit its full potential… 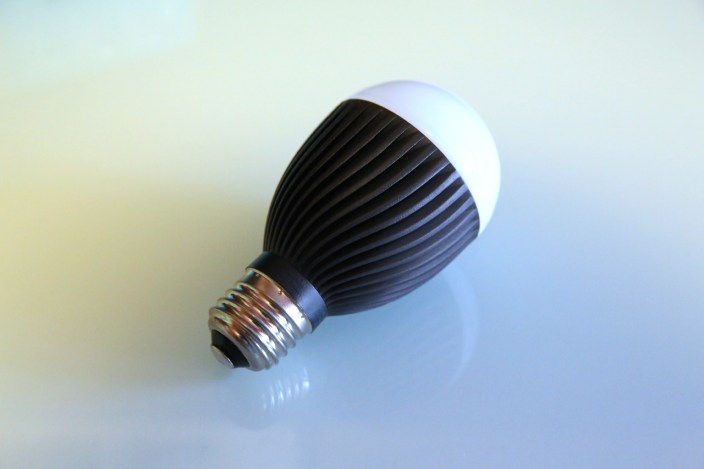 If you’ve seen Philips’ Hue or the Flux Bluetooth LED Light Bulb, or many of their competitors, Bolt’s design will look very familiar: a glass dome atop a heat-wicking aluminum base, with a standard electrical socket connector at the bottom. Unlike rivals, Bolt’s nearly black base is dark enough that you may be able to see it through some ceiling fixtures — a reason to consider switching multiple bulbs in the fixture at once. Alone, it’s an unusually handsome bulb inside standing lamps and other types of fixtures. 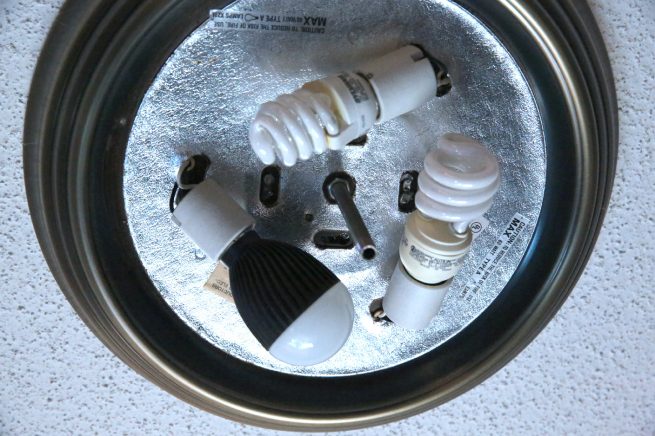 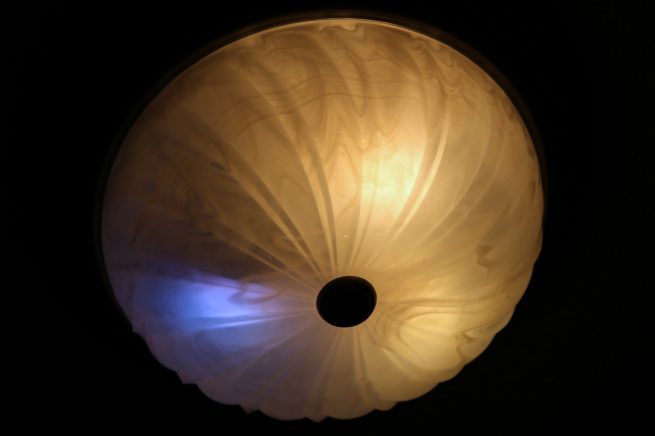 Misfit notes that the dome “uses a proprietary light-diffusion coating” to eliminate uneven bright and dark light dispersion, and although you’d really have to stare into lightbulbs to notice the difference, Bolt’s light does look uniformly bright from edge to edge. In addition to promising a roughly 20-year life span under normal usage conditions — par for the course with today’s LED light bulbs — it draws only 13 Watts of power while delivering 800 lumens of light, equivalent to a 60-Watt bulb. That’s very close to GE’s Link, an inexpensive 60-Watt equivalent bulb with 800 lumens of output and a 12-Watt draw. 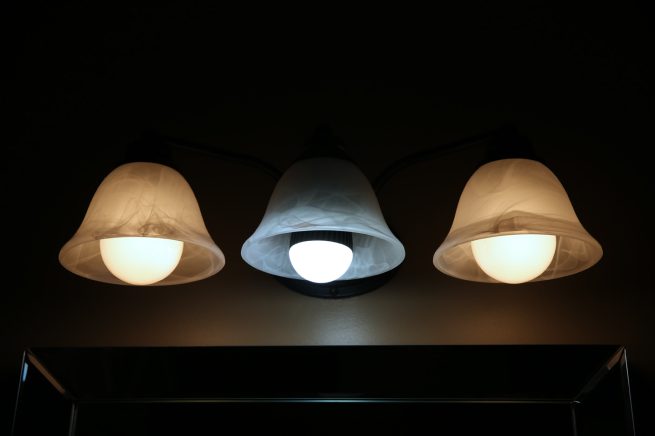 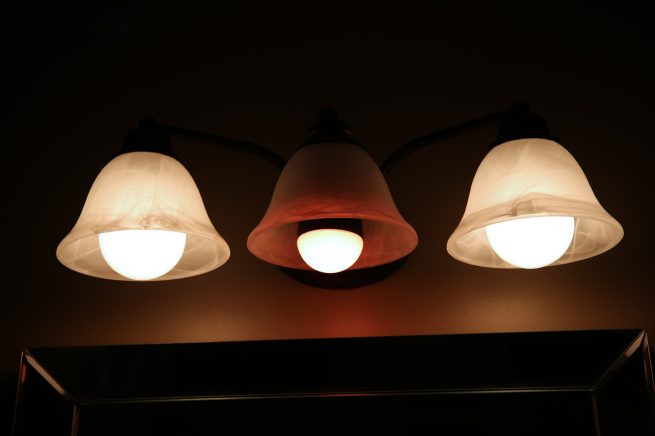 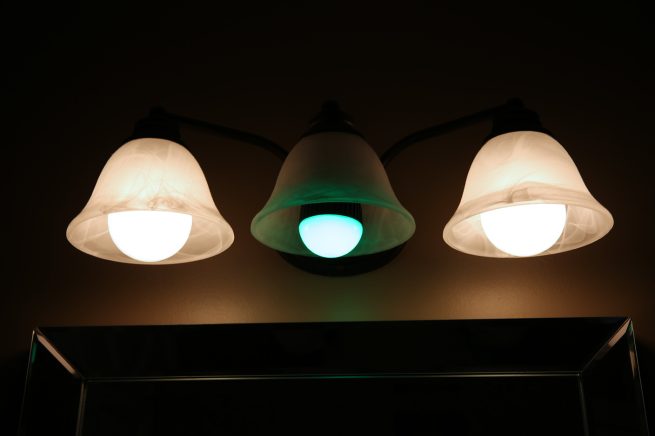 Apart from their price tags, the big differences between Bolt and Link are Bolt’s color-shifting capabilities and use of Bluetooth LE technology. Both are important. Bolt’s color-shifting is accomplished using the new Misfit Home app, which makes initial setup painless — just load the app, set up or sign into your Misfit account, and search for the bulb. At that point, you’re given the choice between 11 different scenes.

“(Wake Up To A) Sunrise” is the only programmable scene, letting you set a time and watch as the light gradually shifts through sunrise-like colors until it reaches a full bright yellow at the appointed hour. The other scenes allow you only to change the brightness using a slider from “off” to intense: Welcome Home (gentle yellow), Bright Day (neutral white), Sunset (rich yellow), Date Night (orange candle-like light), Movie Night (dim blue), Forest (bright green), Volcano (light purple), Rainbow (ever-shifting color), Rocking Chair (light purple), and Salt Flats (aqua blue). Tapping on a + icon lets you save your own scene with whatever color and brightness you prefer, using a color palette, though Bolt doesn’t seem to properly reproduce reds. That’s a small issue; a somewhat larger one is that the bulb doesn’t save the last selected color, so if you flip the light switch off, you’ll need to load the app to set the color again. 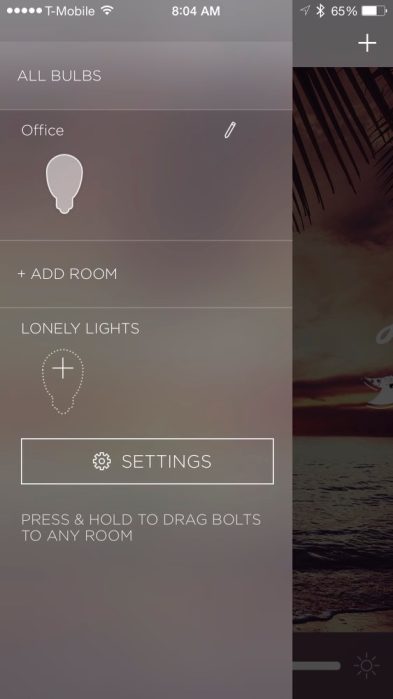 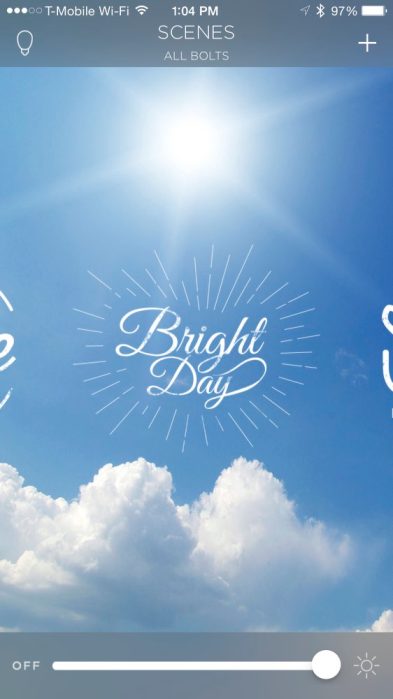 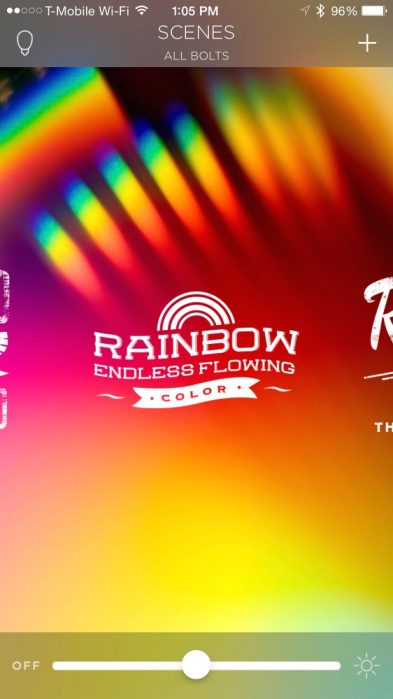 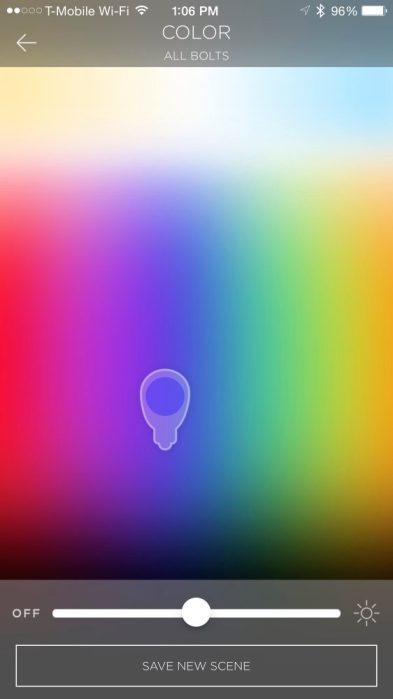 Misfit makes very little mention of Bolt’s use of Bluetooth — perhaps because some of its competitors instead use longer-range Wi-Fi or proprietary wireless standards — but that’s what’s under Bolt’s hood. On a positive note, Bluetooth eliminates the need for a wireless control hub, which adds extra beyond-the-bulb expenses to GE’s Link and Philips’ Hue systems. And when the Bluetooth works, it works well, with reasonably lag-free color and brightness adjustments. But it typically only works within the same room. And 1 out of 2 or 3 times, the app wouldn’t re-pair with the bulb, sometimes even when the iPhone’s Bluetooth indicator suggested they were in contact. Restarting the app sometimes worked. Restarting the app two or three times sometimes worked.

I was also disappointed to discover that there’s nothing in the Misfit Home app to connect Bolt to the Flash tracker, a feature Misfit has been marketing in the months leading up to Bolt’s release. Only when I looked at the in-app FAQ did I find an answer hidden within the question, “What is the difference between the Misfit app and the Misfit Home app?” Misfit says: “In the future, the apps will work together to create experiences such as controlling your Bolt via Flash.” When asked for more specifics on timing, the company said its latest date is “the end of May-ish.” 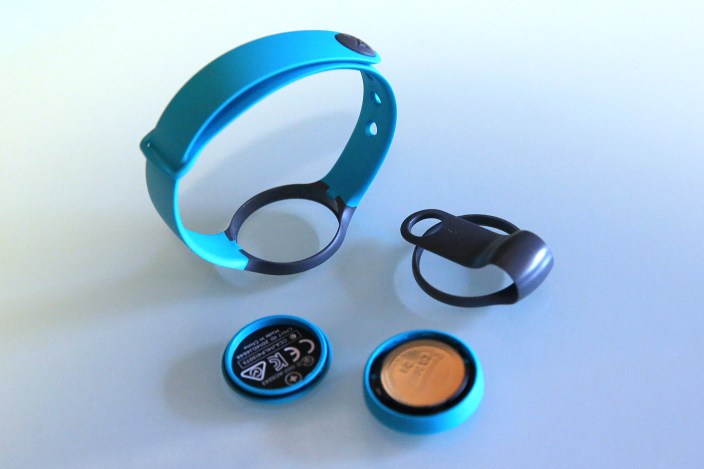 For what it’s worth, Flash is a compelling fitness and sleep tracker for $50. Misfit achieved the price point by converting its earlier aluminum tracker Shine into an all-plastic version, complete with a coin-shaped pedometer that can be worn in an included shirt clip or wristband. You can press the center of the coin to display the time in an abstract way using 12 solid or flashing lights, hold the button down to activate an activity tagging mode, and assign activities to double- or triple-presses. Right now, you can play/pause a Spotify song list or send a “Yo!” to specific friends and family, neither super-compelling to me, but additional activities — including Bolt control — are supposed to be added. 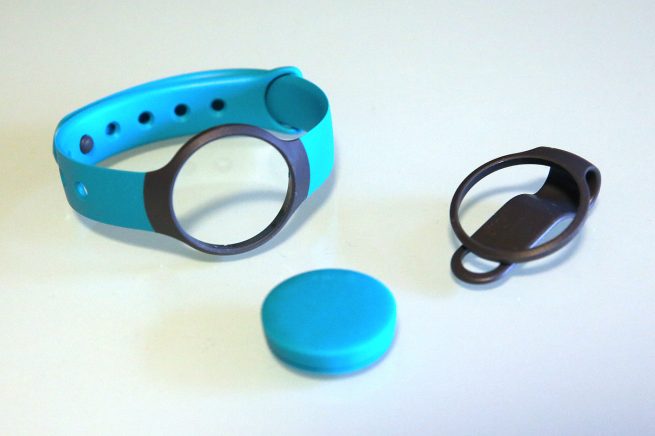 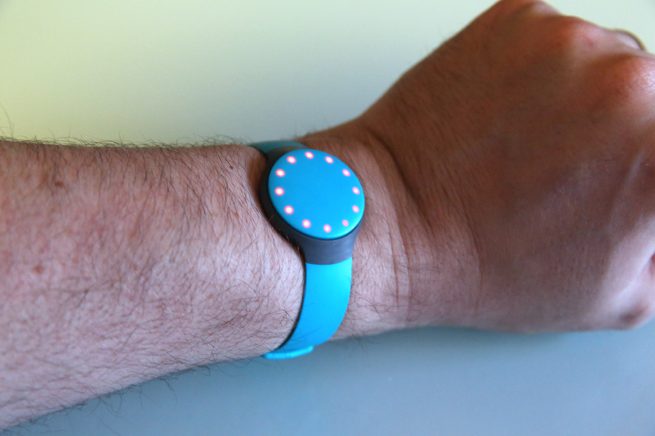 All of Flash’s parts feel as inexpensive as the $50 price point would suggest, but the band was surprisingly comfortable when I slept with it. Misfit’s app actually did a pretty good job of tracking my sleep, something that the Apple Watch doesn’t do, and a fair job of tracking my steps, which the iPhone and Apple Watch both do. Flash’s battery is replaceable, and thanks to Bluetooth LE wireless, rated for two years of use before that’s necessary, though the various plastic parts might not make it that long. For those of us who want to try out sleep tracking without breaking the bank, this is an affordable alternative. 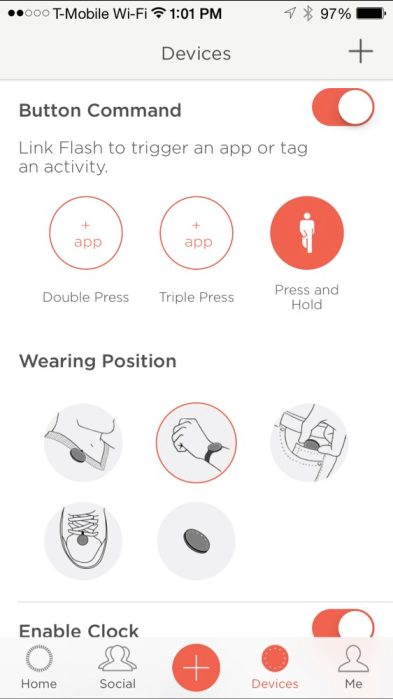 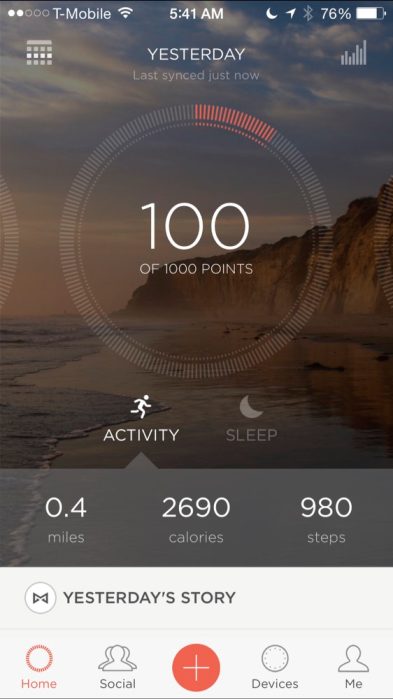 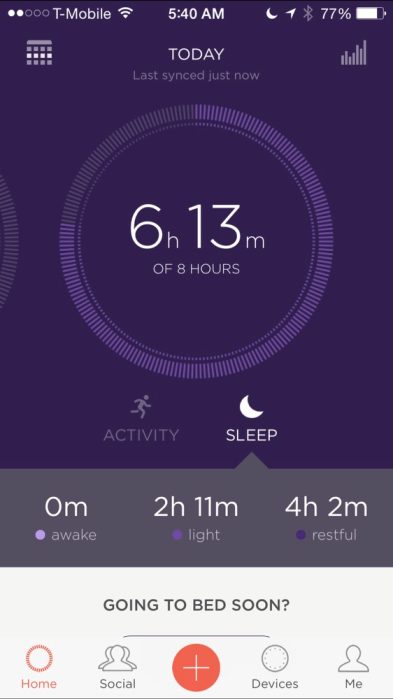 When Misfit pulls Bolt and Flash together as promised — as well as its other accessories — there could be a really nice synergy between home automation and wearables, and one that could benefit from (lower priced) bundling of both parts together. Thanks in part to Apple Watch app demonstrations, it’s not hard at this point to imagine a future where wearables control far more than light bulbs, but the software is going to be a critical part of making that happen. Bolt’s not quite there yet, but the more advanced functionality it promises is hopefully just a month and an app update away.