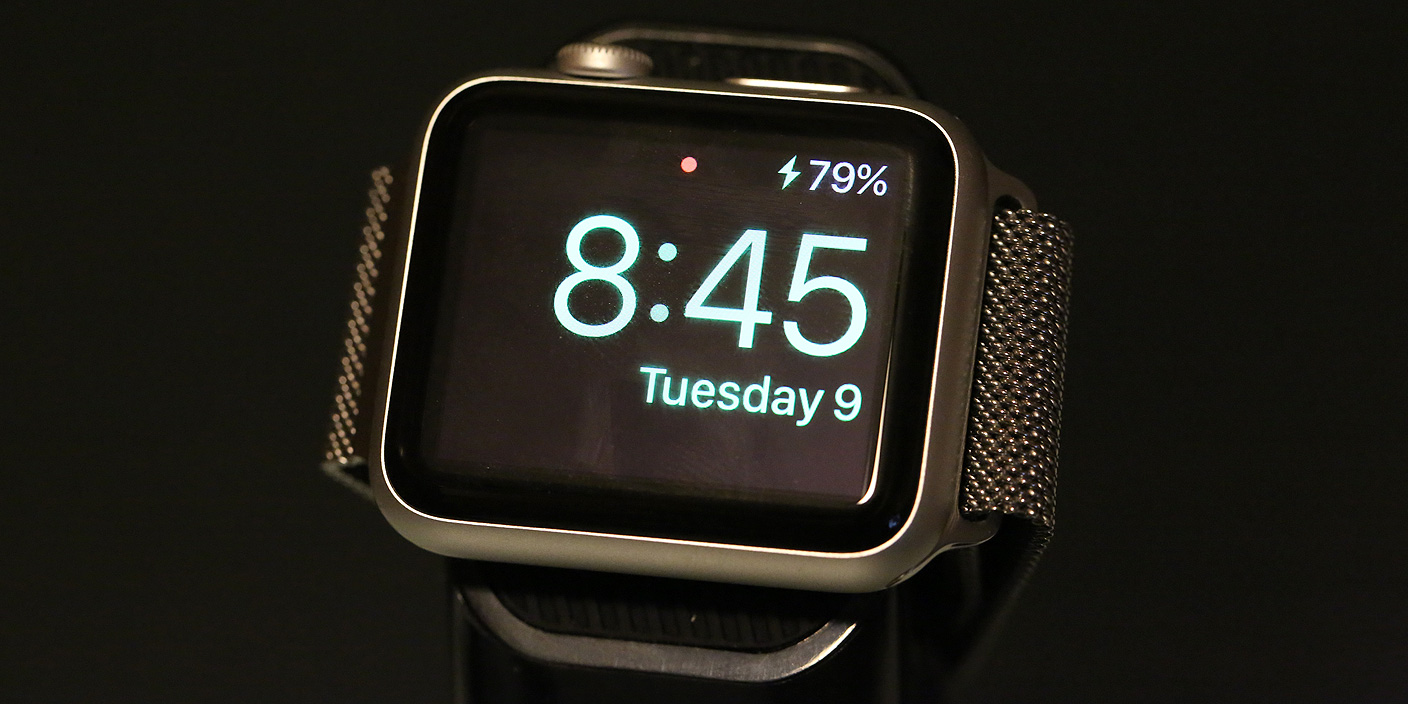 Less than two months after the Apple Watch went on sale (and just as it’s becoming available for same-day purchase), Apple officially announced watchOS 2 — the first major software update for its new platform — at WWDC in San Francisco. Available in beta form for developers now and in final form for consumers this fall, watchOS 2 adds a collection of new features to the Apple Watch, some of which are clearly visible in the beta.

In the galleries below, you’ll see all three of watchOS 2’s new watch faces, improved Digital Touch drawing, enhancements to music playback, the new Nightstand mode… and much more! All of the galleries are clickable, which can help you see more detail in the iOS 9-related Apple Watch shots…

New Watch Faces. Apple originally announced the Timelapse watch face alongside the Apple Watch, but pulled it from watchOS 1.0 (and the minor point release 1.0.1). Each of the five Timelapse faces shows one location rapidly transitioning through hours of day and evening lighting, complete with moving clouds. You can see images of Shanghai, above.

The only customization allowed for this face is the selection between the five locations (Mack Lake, New York, Hong Kong, London, and Shanghai). This is the fastest-moving and most eye-catching Apple Watch face, and it wouldn’t be surprising to see Apple fine-tune the rate at which it moves before the final release.

Two other faces, Photo Album and Single Photo, are based on a Photo face that was also announced but pulled from watchOS 1. Photo Album transitions between whichever collection of still photos you’ve synchronized to the Apple Watch. Single Photo currently only appears if you go into your Photos collection, Force Touch to select an image, and then use the Create Watch Face button to turn a photo into a face. The image remains static on the screen.

Nightstand Mode. This newly-added mode enables the Apple Watch to serve as a bedside clock at night. When laid on its edge with its buttons facing up, it will display a large-faced digital clock complete with the current power level and an alarm (if one is set). Nightstand Mode may well change your perspective as to the best Apple Watch stand / dock out there, or convince you to grab a new Apple Watch stand for use with the feature.

Activity + Workout. While the big news in watchOS 2 is native support for third-party fitness apps, capable of contributing towards your activity and workout counts, they’re not yet available to play with. Force Touch commands reveal some small tweaks to the apps, such as an option to lock the screen during Workout use, and the ability to view a Weekly Summary for the week currently in progress. Using the iOS 9 Apple Watch app, you can also disable fitness-related notifications for a day.

On a related note, however, Apple has transformed the achievement medals into user-spinnable 3-D models within the iOS 9 Activity app. Outline-only medals are empty between their bars, but filled discs now carry dates and a tiny Apple logo on their backs.

Music. The threadbare Apple Watch app for Music is seeing some UI improvements, including an iOS 8.4/9-like display of album art for recently-heard songs, and a more conspicuous button to switch between iPhone and Apple Watch music libraries. Also, something interesting and music-related has been added to the Glance for settings: an AirPlay button that currently doesn’t do anything except display the Apple Watch’s name. watchOS 1 lets the Apple Watch serve as a remote control to direct the connected iPhone’s music to an Apple TV; the prominence of this AirPlay button in a Glance suggests that something will change here before watchOS 2 is officially released.

Digital Touch and Friends. watchOS 2 now lets you draw in multiple colors by toggling between the previously available color choices mid-drawing. Only watchOS 2 users can see the additional colors in the drawings; they appear in a single color on watchOS 1.x devices. There are now multiple Friends screens (swipe to the left like multiple iOS Home screens), each customizable, and you can specify phone or FaceTime audio for calling, with multiple accounts selectable for messaging.

Mail. watchOS 2 lets you respond to email messages directly from the Apple Watch, using the same types of canned responses as Messages, or dictation as you prefer. There’s a pull-to-refresh gesture within the Inbox, and individual messages can easily be marked unread and archived. You can create Default Replies and a Signature (“Sent from my Apple Watch,” of course) within the iOS 9 Apple Watch app’s settings.

Wallet. Passbook has been renamed, re-iconed, and updated internally to mirror the iOS 9 transition of Passbook to Wallet. Interestingly, iOS 9 has been given an Apple Watch feature, too: you can now double-click the Home button from the lock screen to call up cards or passes, similar to the side button double-click for Apple Pay on Apple Watch.

Maps. While it hasn’t yet seen the speed increases it desperately needs, the Apple Watch Maps application now includes support for Transit directions, one of the marquee additions to iOS 9’s Maps.

Apple Watch App For iOS 9. Apple has made a number of subtle tweaks to the iOS 9 version of the Apple Watch app, rearranging some of the settings and adding new features. Do Not Disturb and Airplane Mode have been moved into the General section, while a Complications setting has been added. Currently without selections, Complications will eventually let third-parties create mini-notifications for Apple Watch faces.

There are a bunch of smaller tweaks. For instance, the Activity setting lets you “mute coaching for one day” if you don’t want to receive fitness-related reminders for a day. The new Nightstand mode, which lets the Apple Watch serve as a bedside clock and alarm, can be activated or deactivated from with this app (or the Watch’s own settings). You can also manage your multiple pages of Friends here, including addition of a “Group Name” for each screen, so you can have one page of Friends, one page of work colleagues, one page of restaurants, and so on.

To see many of the new watchOS 2 features in action, check out my colleague Dom Esposito’s new watchOS 2 video here. And if you’re thinking of trying the watchOS 2 beta for yourself, a word of caution: you may not be able to go back to watchOS 1.x, so don’t be surprised if you experience atypical battery drain or instability after the update.