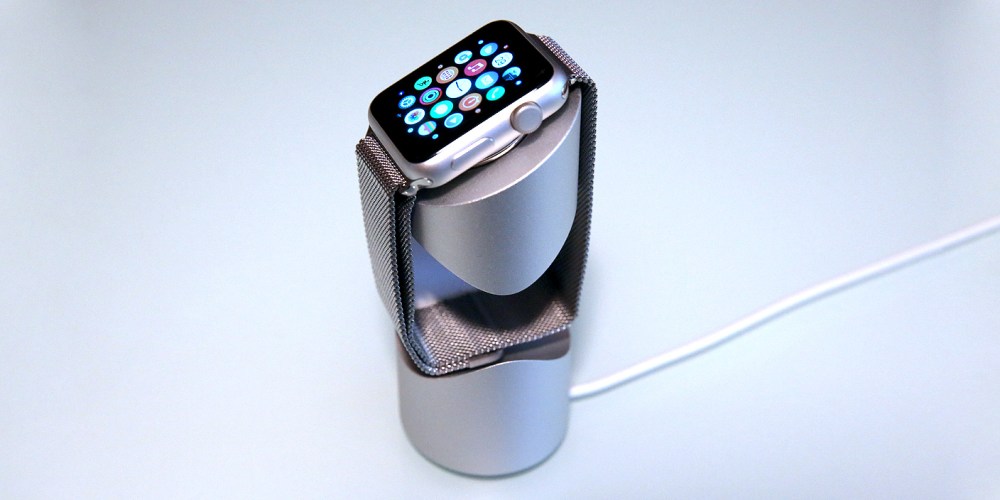 If you want an Apple Watch stand, you can choose from three major materials: plastic, wood, or metal. The universally affordable plastic options tend to look a bit cheap when paired with the Apple Watch — particularly non-Sport models — while the pricey wood ones are somewhat polarizing, sparking a roughly equal mix of “love” and “hate” responses. From what I’ve gathered from readers, metal is the most popular Apple Watch stand option, with options starting at $20 and climbing sharply; most of the best metal stands are hovering around the $60 mark. For months, I’ve felt that the sweet spot for a nice metal Apple Watch stand was right in the middle of that range, but there hasn’t been a worthy option to test the viability of the $40 price point.

That’s part of the reason Just Mobile’s TimeStand ($40) feels inevitable. It was merely a matter of time until the metal masters at Just Mobile weighed in with their take on an Apple Watch stand, and given their design history, it’s no surprise that the result is an elegant little desktop sculpture. TimeStand is machined from a single piece of either silver or black anodized aluminum with a weighted, rubber-padded base, distinctly modern and substantial, yet $20 less expensive than options I’ve previously reviewed from Mophie and Nomad. Moreover, TimeStand’s unique shape offers compatibility with all Apple Watch bands, though there are some small caveats you might want to be aware of… 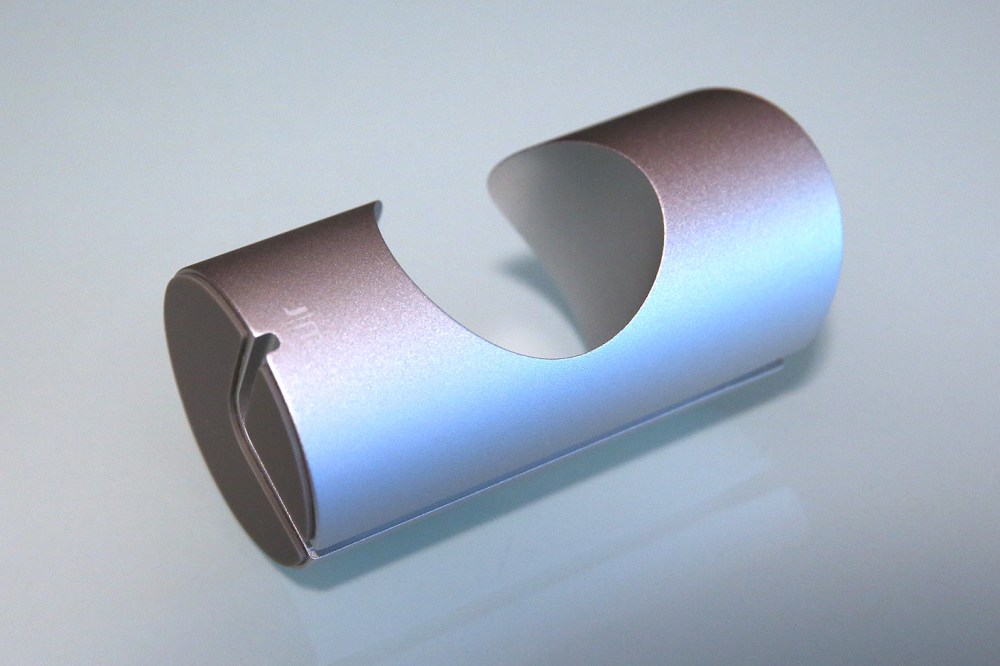 TimeStand’s most distinctive feature is its appearance. Designed by Denmark-based design studio Tools, the shape is described by Just Mobile as a cylinder, though it invisibly tapers from perfectly round at the top to an oval at the bottom, with a very minimal 1.75″ to 1.95″ footprint. Just Mobile chose to angle the top surface, and cut a large cylindrical hole out of the center, forming a “C” shape with the remaining metal. Photographs might suggest that the open side of the C has sharp edges, but they’ve actually been finished softly enough that you won’t cut yourself on them. 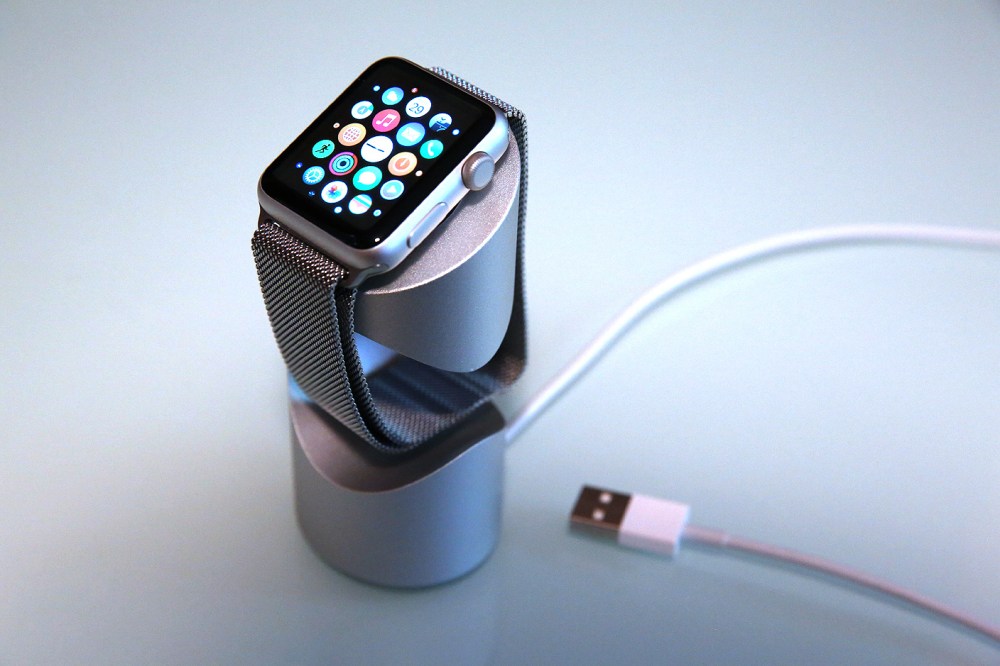 The central hole isn’t just visually striking — it’s also functional. It’s set at just enough of a distance from TimeStand’s top to enable the remaining metal to support the Apple Watch while letting any band dangle underneath. While you can physically turn the Apple Watch into landscape orientation, the recline Just Mobile chose for the watch is a degree or two shy of activating the large clock-faced Nightstand Mode on watchOS 2.0, at least as of the current beta version. Some people will consider this disappointing; others won’t mind at all. 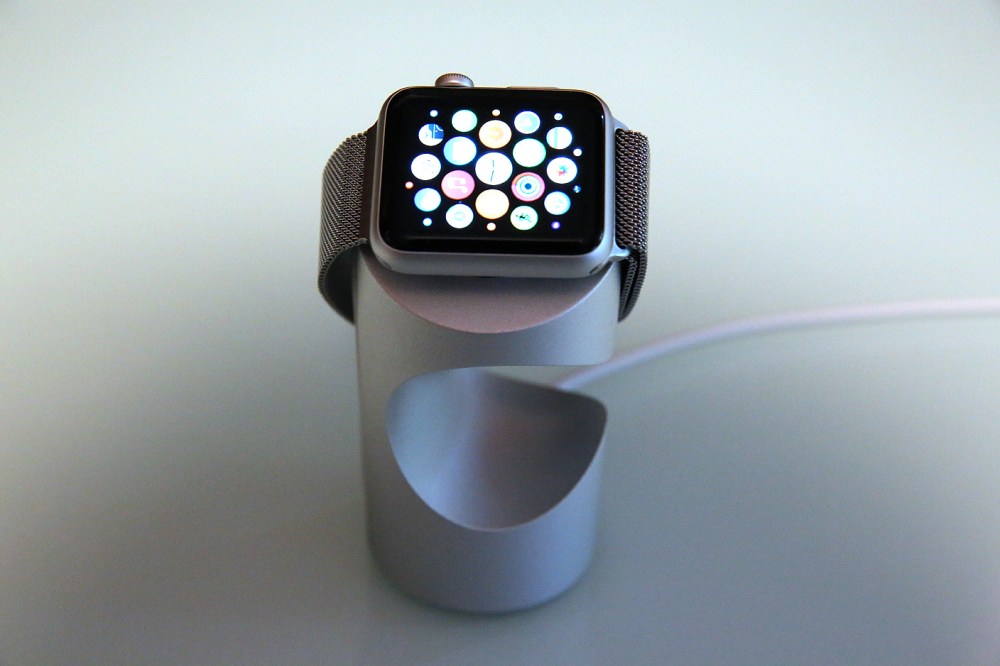 A channel in TimeStand’s left edge holds the cable before it routes through TimeStand’s bottom, and emerges from a hole in the back. While the channel could stand to be deeper on the left side to better hide the cable, it’s secured well enough at two bend points to avoid accidentally slipping out during normal use. The weight inside TimeStand’s base is also heavy enough that you won’t pull the stand up every time you remove your Apple Watch from the charging puck. My only concern would be making sure that any closed metal band avoids rubbing against the edges of the metal C on insertion or removal. 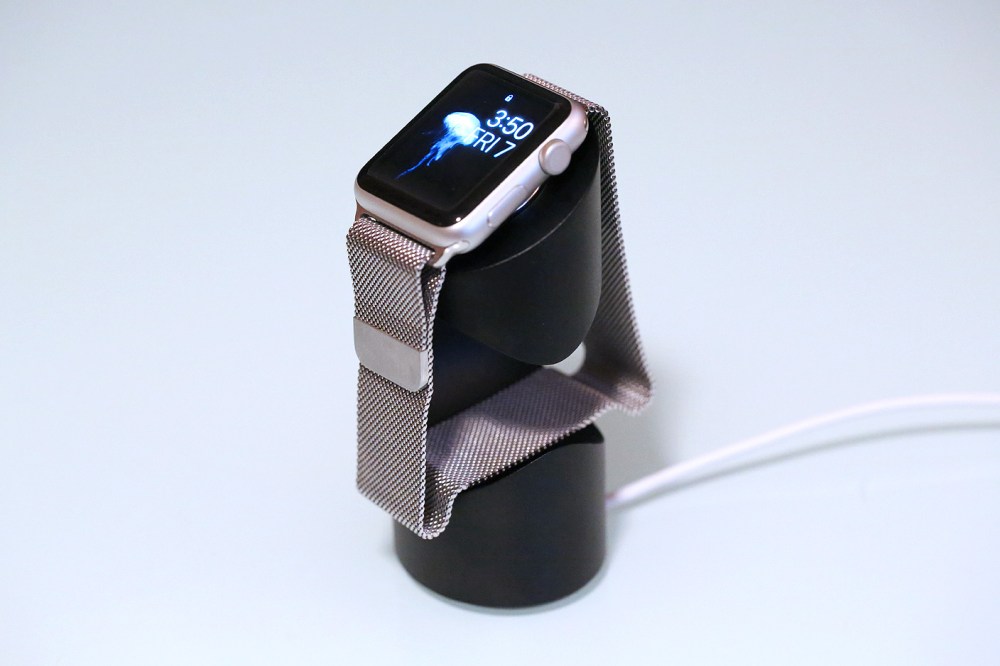 I’ve been a fan of Just Mobile’s metal design pieces for years, so for $40, TimeStand strikes me as a very good value: it offers the same level of style and quality of materials you’ll find in $60 stands from companies such as Mophie and Nomad, but at a price tag closer to entry-level $20 Spigen stands. An obvious initial omission was TimeStand’s launch with only a single color, silver, which matches the majority of Apple Watch and Apple Watch Sport models, but in August 2015 Just Mobile added a jet black aluminum version (shown above) as an alternative. That leaves only one tweak — a slight adjustment to the top angle for Nightstand Mode compatibility — that could take TimeStand from “very cool” to “universally appealing.”