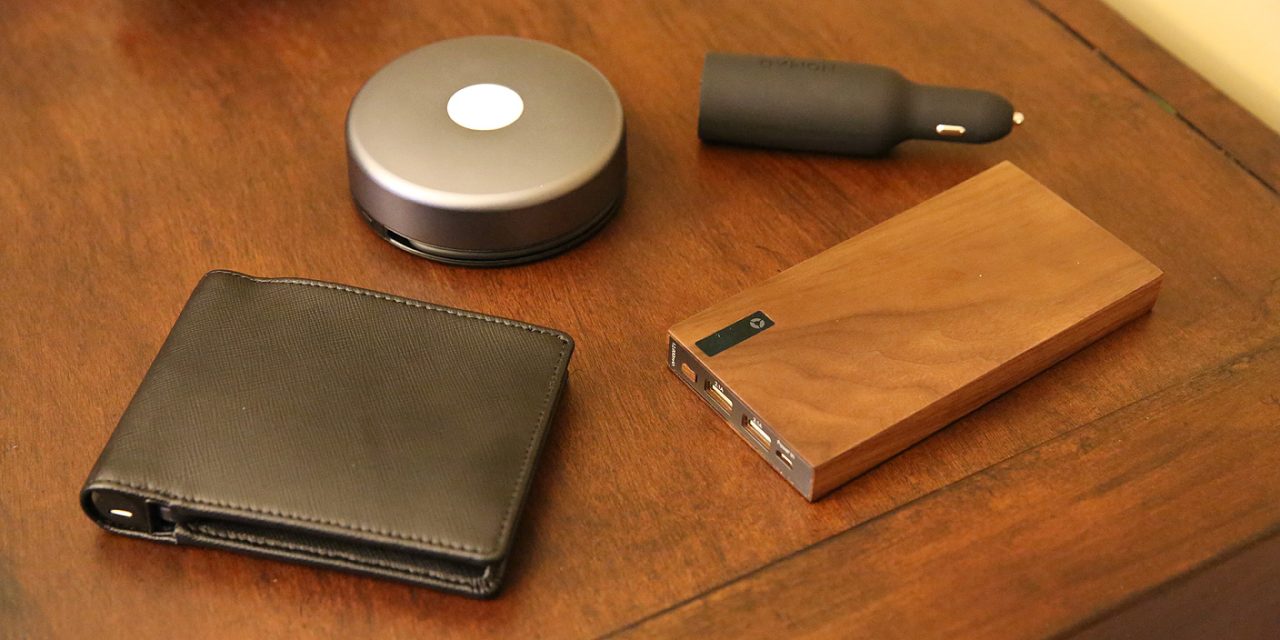 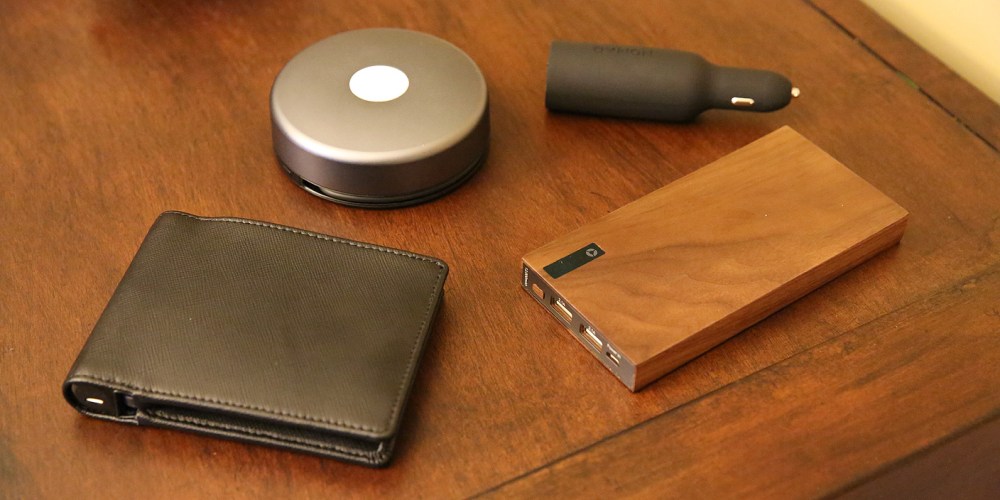 Nomad is ending 2015 with a bang. Having moved from small plastic accessories into using luxury materials including metal, leather, and wood, Nomad is flexing its design muscles with four new Apple device chargers that are equally attractive and creative. There’s a deluxe metal Apple Watch/iPhone travel charger called Pod Pro, the wood-encased iPad battery pack PowerPlant, a hybrid iPhone battery and car charger named Roadtrip, and a Lightning battery-equipped leather Wallet. Three of the accessories look as if they were expressly designed to be holiday gifts, while the fourth is less exotic, but practical.

The common thread here is “portable power.” Pod Pro steps up from Nomad’s Apple Watch-only Pod (reviewed here) by more than tripling the power to 6,000mAh, and adding iPhone charging. PowerPlant packs an iPad-ready 12,000mAh cell inside a solid American Walnut wood block. Roadtrip serves as a car charger in your car, doubling as a portable iPhone battery pack for on-the-go use. And Wallet guarantees you’ll have a 2,400mAh battery and Lightning cable anywhere you go. Below, I’ll quickly walk through all of these new accessories so you can get a sense of whether any or all of them is right for you, or your favorite gift recipient… 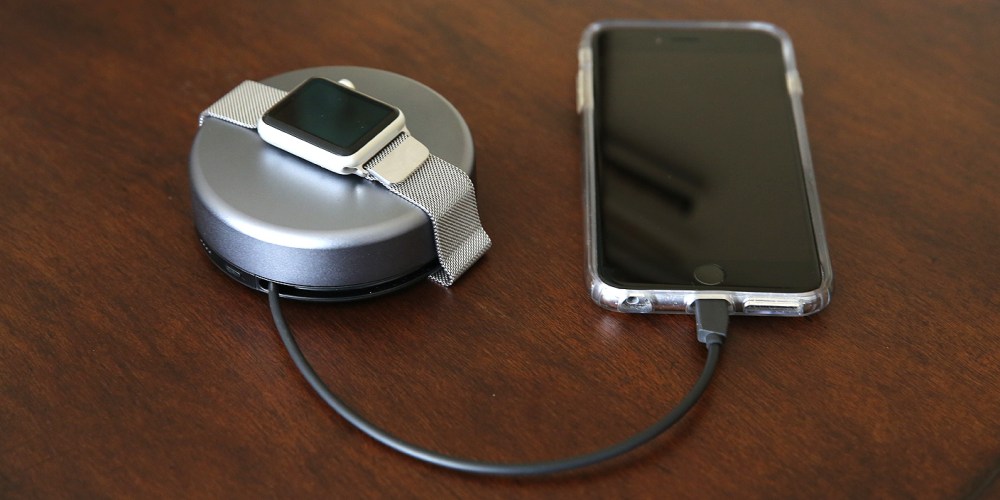 Out of all four of these accessories, the one that initially interested me the most was Pod Pro, Nomad’s bigger and better sequel to the early Apple Watch charging dock Pod. Featuring a clean circular design that resembles Apple’s just-released plastic Apple Watch Magnetic Charging Dock, both Pod models wrap a self-supplied Magnetic Charging Cable around a circular battery core. While Pod has an 1,800mAh battery that can recharge an Apple Watch around 3 times, Pod Pro’s 6,000mAh battery — and integrated Lightning cable — can be used either to keep your Apple Watch running for 9 days, or to refuel both your iPhone and Apple Watch on the road. It charges the iPhone at 1 Amp and the Apple Watch at 500mA.

In my testing, Pod Pro was able to deliver a 134% recharge to a power-hungry iPhone 6s Plus, as well as a 100% recharge to a 42mm Apple Watch — both notably Apple’s largest devices of their kinds. Nomad suggests that Pod Pro can recharge both an Apple Watch and an iPhone twice, and that’s true if you’re using a smaller iPhone and/or Apple Watch. You’ll come closer to a 2x charge with an iPhone 6 or 6s, and do even better with any iPhone 5-series phone. A small four-light indicator on the base is triggered with an adjacent button to let you know how much energy is remaining, and a micro-USB cable can be used to refuel Pod Pro’s battery. 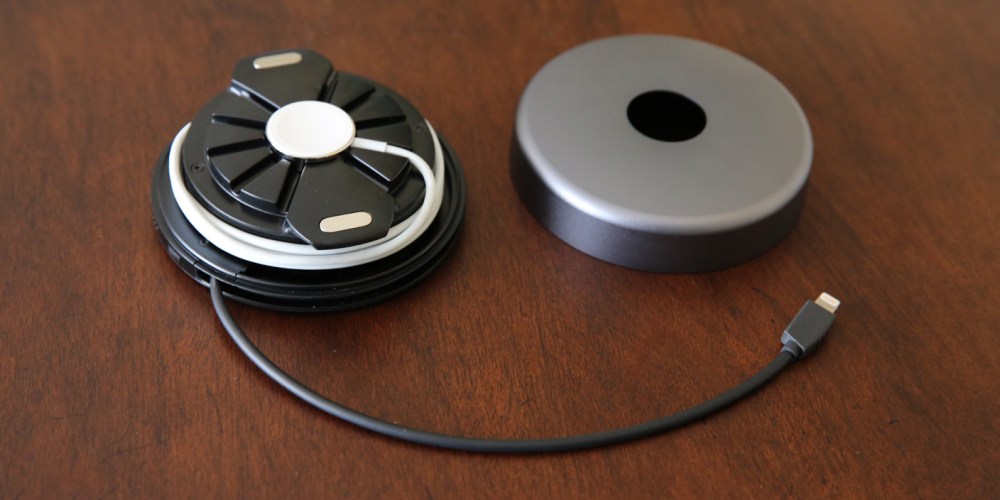 Like Pod, Pod Pro looks and feels great. The gunmetal cap is solid, magnetically attaching to the plastic cable-wrapping and battery core, which has a large anti-slip rubber pad on the bottom. To hold the bigger battery, it’s larger — a 3.9″ diameter versus Pod’s 3.1″ — but the added size of the still puck-like shape doesn’t radically change its Apple Watch compatibility. You can place open-band Watches on its top, and either loop closed-band Watches (like the Milanese, shown above) around its bottom if you’re willing to risk scuffing. Tighter bands (including the Link Bracelet) may not fit that way. 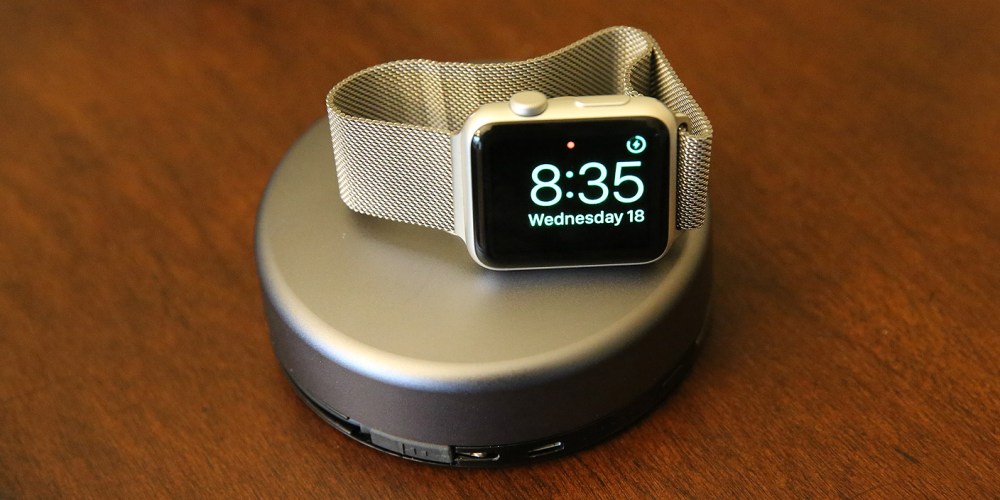 The alternative is to follow the example set by Apple’s new dock, and pop the inductive charger puck out of Pod Pro’s top hole. To do this, you just need to feed your charging cable’s USB plug through Pod Pro’s gunmetal cap. I wouldn’t for a moment call this ideal, but it works if you’re using a closed band.

While Pod Pro isn’t cheap, it delivers much better value for the dollar than Apple’s Magnetic Charging Dock, as the materials, integrated battery, and Lightning charging option make it worth actually carrying around as a travel recharger for your Apple Watch and iPhone. Due to its capacity, I would personally pick it over the original Pod even if I was just looking to keep an Apple Watch running on the road, but go with the version that suits your budget and needs. 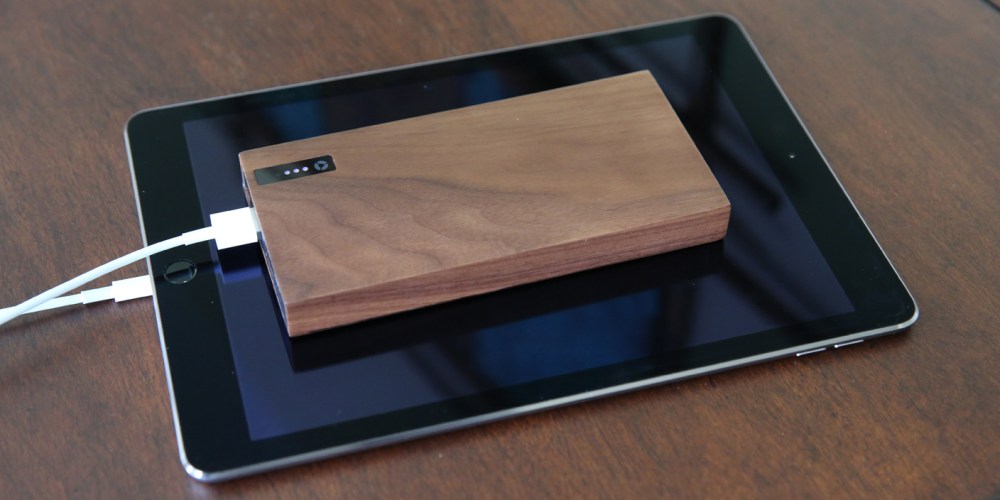 Of all four accessories here, I have the least to say about PowerPlant, which is the simplest concept — albeit with the best name. Measuring roughly 5.9″ by 2.9″ by 0.6″, it’s a genuine wood box made from American Walnut, a design you’d be hard-pressed to find in other Apple device batteries. Decidedly rectangular but smooth, it houses a 12,000mAh battery with a 2.1A micro-USB input, twin 2.1A USB outputs, and a button to trigger a four-LED light panel on the top. The color of the box is a rich, attractive brown, accented by black and gunmetal plastics, with silver ink on the bottom for specifications and branding. A micro-USB cable is included to refuel the battery, which given the high capacity requires an overnight charging session.

During my testing, PowerPlant was able to deliver a 103% recharge to an iPad Air 2, which is 13% lower than the similarly 12,000mAh myCharge HubUltra I tested earlier this year. While that isn’t bad given that HubUltra sells for 10% more, it’s fair to say that 12,000mAh batteries are becoming much more common and affordable. The Aukey PB-N28 I reviewed is now selling for under $20, though it’s seriously low on frills; you’ll have to compromise on everything from power indicator lights to charging and recharging performance to use it. PowerPlant has the same capacity, but a much nicer presentation at a premium price. Speaking for myself, I’d sooner go with a metal-clad, more powerful, and less expensive option such as Anker’s PowerCore+ 20100, but if you love wood enough to wrap your external iPad battery in it, PowerPlant is a reasonable option. 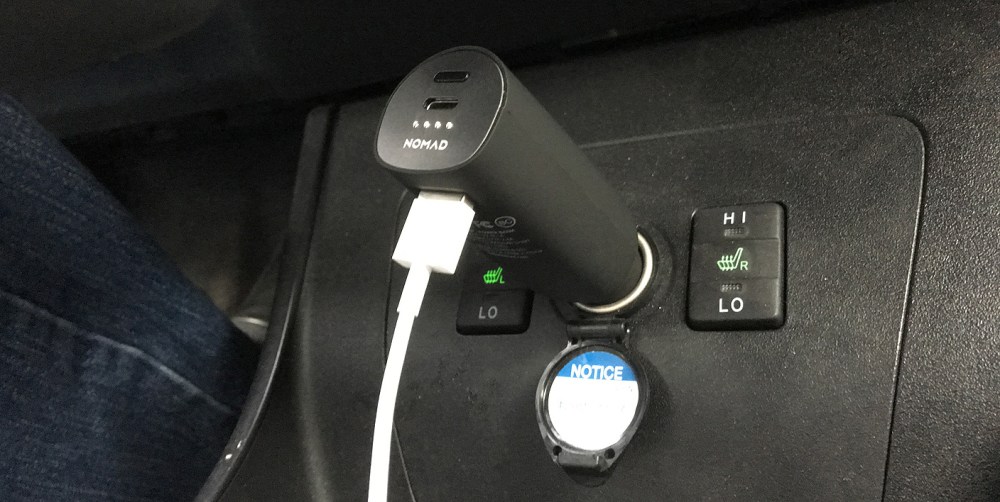 Like batteries, there are hundreds of car chargers out there, and very little innovation to distinguish them from one another. Built with an anodized aluminum face and soft touch rubber body, Roadtrip breaks from the pack in several ways. First, it’s the very rare car charger with both USB and USB-C ports; you supply the charging cable of your choice. Second, both ports can be used simultaneously, and though the packaging and web site differ on this point, Roadtrip delivers 3.0-Amps of total power, with 1.5A out per port. Third and finally, there’s actually a 3,000mAh battery inside, so when you’re done driving somewhere, you can pull it out of your car’s power outlet and carry it around for power. In my testing, the battery delivered a 75% recharge to my large iPhone 6s Plus; smaller iPhones will get a full recharge.

Depending on how much you drive — and how much you alternate between driving and walking — Roadtrip could either be extremely convenient or somewhat confounding. It strikes me as more practical than the only other dual-purpose car charger I can recall, Incase’s Car/Wall Charger, which awkwardly grafted wall blades onto a car charger years ago. If you drive to work — or drive then transfer to a train or subway to get to work — you can have a battery that’s ready to use anywhere throughout the day, then recharged by plugging it back into your car before you drive home.

The only question is whether you drive enough for your car’s power outlet to fully recharge Roadtrip between uses; Nomad notes that “it’s almost always 100% full and ready to use,” which will be accurate if it has two hours of collective time to recharge in your car, without an iPhone attached. When your iPhone’s attached, it will recharge the iPhone first, then itself, extending the spare battery’s charging time. Roadtrip is therefore best suited to commuters with long travel times, and other people who — as the name suggests — have long road trips ahead. It’s not for everyone, but those who need it will appreciate what it offers in a single, reasonably-priced enclosure. 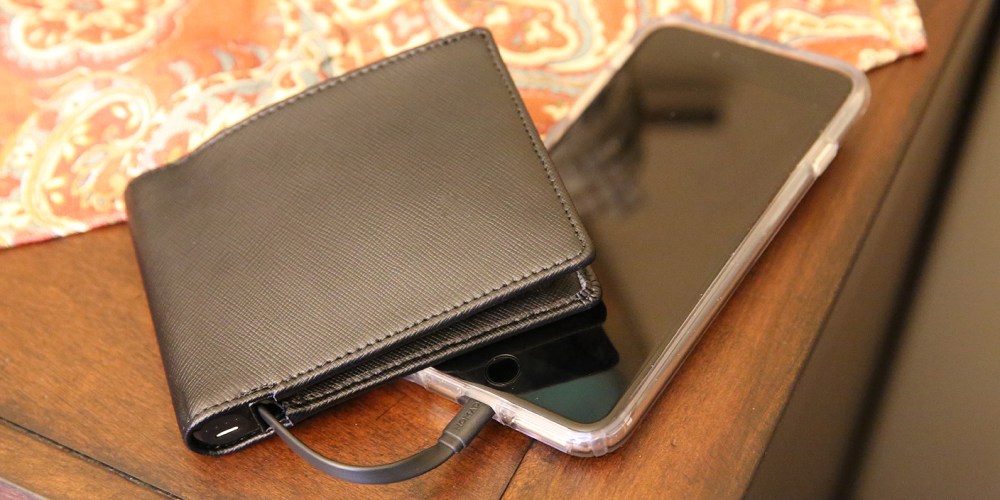 Last but certainly not least is Nomad’s new Wallet, which is the most distinctive item in this collection — and the one that has the most potential to become a breakout hit. Made from black Saffiano leather, Wallet was “tirelessly prototyped” until it could fit a 2,400mAh battery into a design that’s “true to the size of a standard wallet.” In person, Wallet looks bigger than the deliberately compact and awesomely minimalist Flipside Wallet I carry, but it’s around 2/3 the size of my iPhone 6s Plus, and not much larger than the leather wallets I used to carry around. 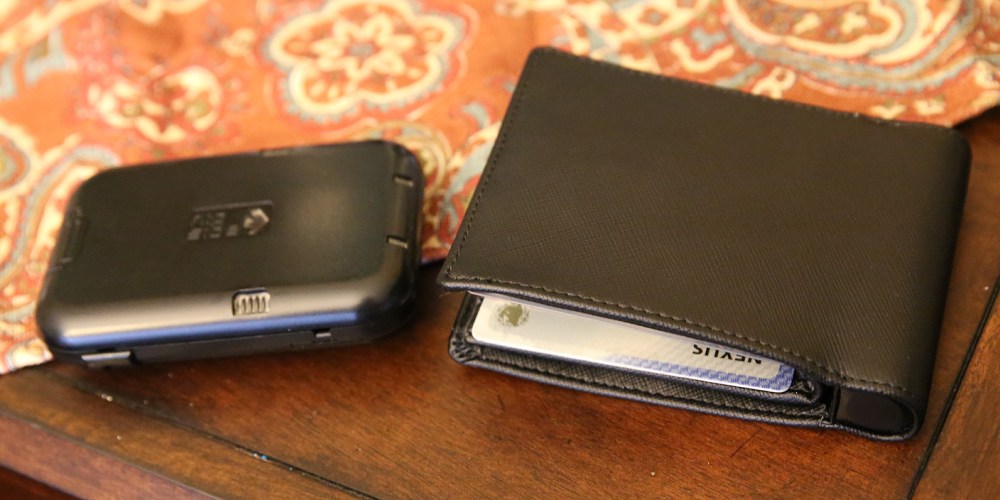 Nomad made some pretty smart choices when designing Wallet. The cash compartment is large enough to hold bills of any currency, and six visible card slots are augmented by two hidden compartments for business cards or other items. By placing the battery and pop-out Lightning cable in Wallet’s spine, Nomad manages to make its charging solution basically undetectable in a front pocket; the core is also fortified with aluminum to preserve the battery’s integrity, which could be an issue for people who sit on their back-pocketed wallets.

During testing, the compromises I noted were in power controls and capacity. In the name of streamlining, Wallet offers no button to trigger the four white LED remaining power indicators, or turn power on and off; it starts working when you plug it into your iPhone, and stops when you unplug it or run out of power, providing no way to check the power level without interrupting charging. You use a separate included micro-USB cable to recharge it, which would ideally take place on your nightstand while you sleep — keeping your wallet connected to your computer’s USB port mid-day is quite an unusual sight.

While I found Wallet’s look and feel to be pretty nice, its battery is the smallest in this group. During my testing, the 2,400mAh capacity was just able to completely fill an iPhone 5c — basically identical to the iPhone 5 — before becoming unable to charge further. So while Nomad promises a “full charge for your iPhone 6s,” that’s probably optimistic. In a separate test refueling the slightly larger-capacity iPhone 6, Wallet fell well short of a 100% charge, and Apple’s Plus models obviously demand even more energy. From my perspective, Wallet is best understood as a highly compact way to carry around at least a partial backup charge for any iPhone on the go, and so long as you don’t expect a complete recharge from the latest models, you’ll be satisfied with its performance.

Check out more of my editorials, How-To guides and reviews for 9to5Mac here! In recent months, I published a holiday gift guide for Apple photographers, and a lot of different topics of interest to Mac, iPad, iPhone, iPod, Apple TV, and Apple Watch users.