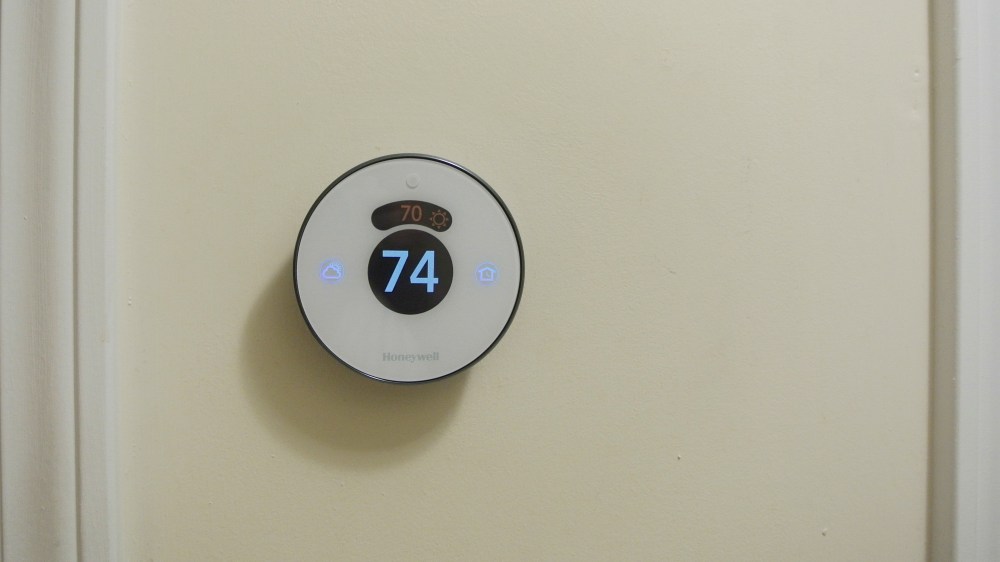 If you’re looking to upgrade your home appliances and add Siri control, then HomeKit is a key feature you’ll want to look for when buying new hardware. The number of HomeKit-compatible smart thermostats is continuing to grow with Honeywell’s Lyric Round Wi-Fi Thermostat (2nd-gen) as the latest to hit the market.

Among competing thermostats, the basic premise is the same: Wi-Fi connectivity lets you remotely control heating and cooling from mobile apps, and intelligence using location and the Internet let you add some home automation. The pay off is potentially a lower energy bill and the cool factor of controlling the temperature with Siri.

Having recently reviewed the ecobee3 HomeKit thermostat as well, I’ll be using it as a comparison below to highlight what makes Honeywell’s Lyric Round smart thermostat different.

Both the ecobee3 and the Honeywell Lyric support Apple’s HomeKit framework for letting connected devices from different manufacturers work together and be controlled by Siri. Both HVAC controllers have iPhone, iPad, and even Apple Watch apps for remotely changing heating and cooling settings. Even their retail prices are the same at $250.

But starting with the appearance, the Honeywell Lyric Round has quite a few differences from the ecobee3.

As its name suggests, Lyric Round is designed around a circular control. The design doesn’t disappoint either. Just turn the dial forward or backward to raise or lower the target temperature and watch it change on screen. 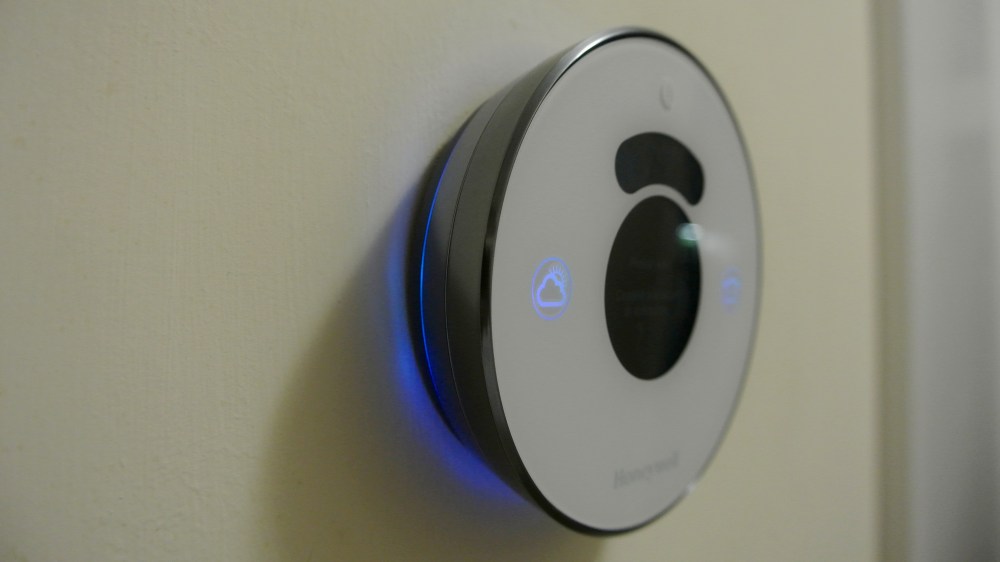 Rotating the dial has a nice feel to it: it’s heavy enough that you won’t accidentally go from 75º to 65º and freeze your family. Each degree change is approximately one hour apart if degrees were hours on a clock. This is nice if you have an eye for round smart thermostats but want HomeKit support baked in. 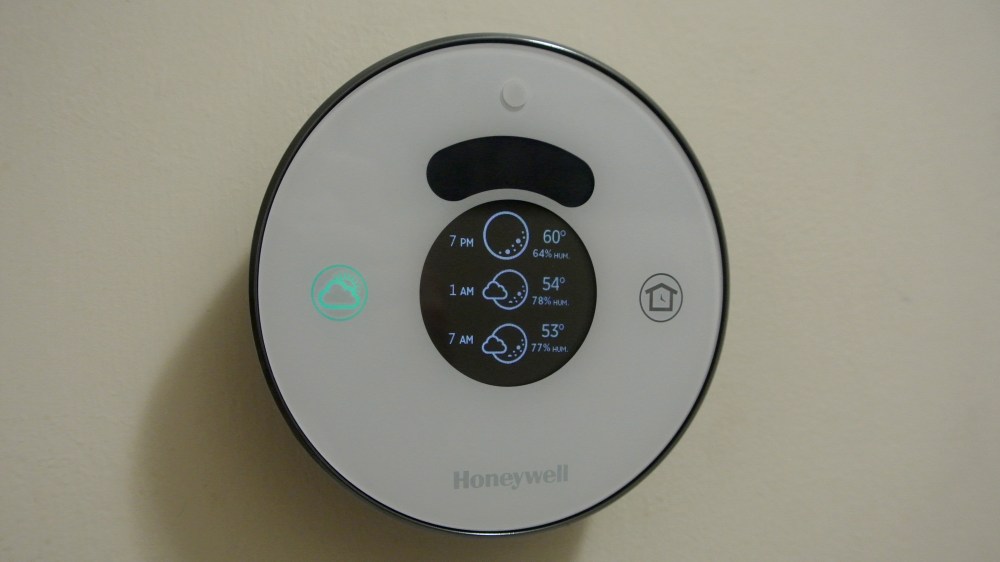 Tap the cloud button to view a 6- and 12-hour local forecast, or tap the house button to enable away mode.

Honeywell’s weather forecast is less detailed than ecobee’s and requires a dedicated button to view it, but this may appeal to customers looking for a simpler smart thermostat. You’ll find an icon for the weather condition (I really like the moon), the forecasted outside temperature, and the outside humidity level. 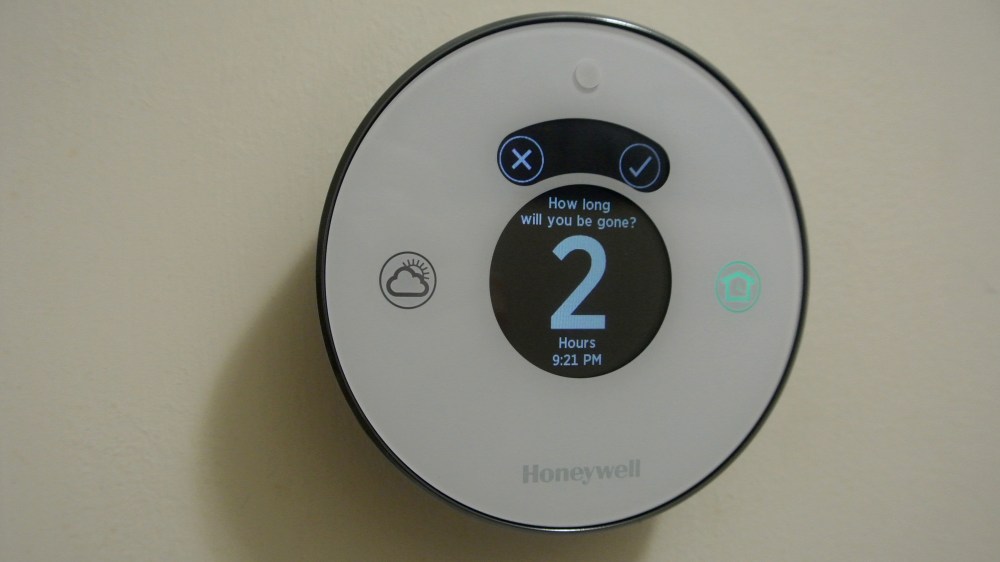 You can automate away mode using the Lyric app, but Lyric Round also has a dedicated button on the thermostat that sets the unit to away mode for a set number of hours. Tap the house button, then rotate the dial to choose between 1 and 24 hours, then confirm the setting on the touch screen. You’ll notice your target heating or cooling temperature drop to your preferred away setting. Optionally, you can tap the house button again to disable the timer.

There’s another function hidden within Lyric Round that only advanced users will find: a set of on-screen menus. Honeywell takes a more traditional approach to this smart thermostat than ecobee, and hiding these controls before a shortcut means less tech-savvy users won’t be intimated by Lyric Round compared to more traditional thermostats. 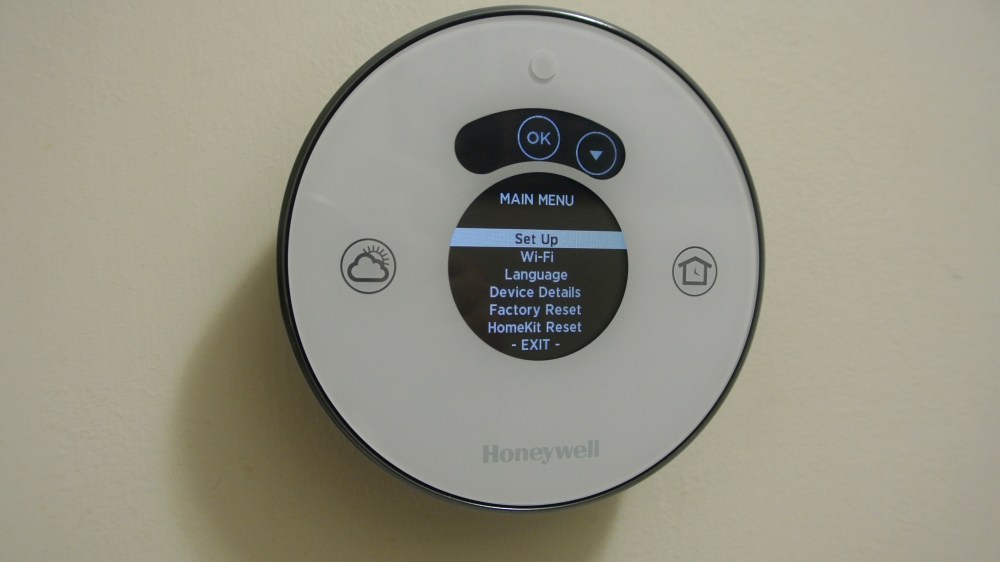 Long-press the cloud icon for several seconds to access the hidden menu list, then use the arrow controls on the touch display to navigate up and down the list. An OK button is centered for selecting items. Curiously, rotating the dial doesn’t let you move around the menu. My first instinct was to rotate clockwise to move down the list, counterclockwise to move back up, but Lyric ignores rotation in those mode — even for temperature — and you need to navigate down to EXIT and tap OK to leave it.

Contrast that with ecobee’s approach: slapping a rectangle touch screen on a round rect thermostat and using a nearly identical interface on the unit as the iPhone app. Honeywell instead opts for a less gadget-looking, round thermostat with a round non-touch display, a bean-shaped touch display, and two touch-sensitive side buttons. Turning the dial to change the temperature is a natural experience, while the rest of the interface is more limited for better or worse.

Honeywell instead saves a lot of the smarts for the app. For Apple device users, Lyric Round can be controlled using the iPhone, iPad, or Apple Watch app. Much of the setup process also goes through the app including joining your Wi-Fi network. Whereas ecobee3 can join your Wi-Fi network directly from the unit, Lyric Round relies on connecting to your iPhone over Wi-Fi, then adding the thermostat as a new device on your network. Both processes are simple to walk through, though, and only matter during setup.

Configuring HomeKit is also similarly done through the Lyric app on iOS. Once enabled, you can tell Siri to set Lyric Round to a certain temperature, or ask about the current inside temperature. As with any HomeKit accessory, you can also connect Lyric Round to scenes and triggers. This lets you tell Siri “Good night” to turn off the lights, lock the front door, and lower the temperature if you setup that scene; leaving your house can create a similar scene based on location. 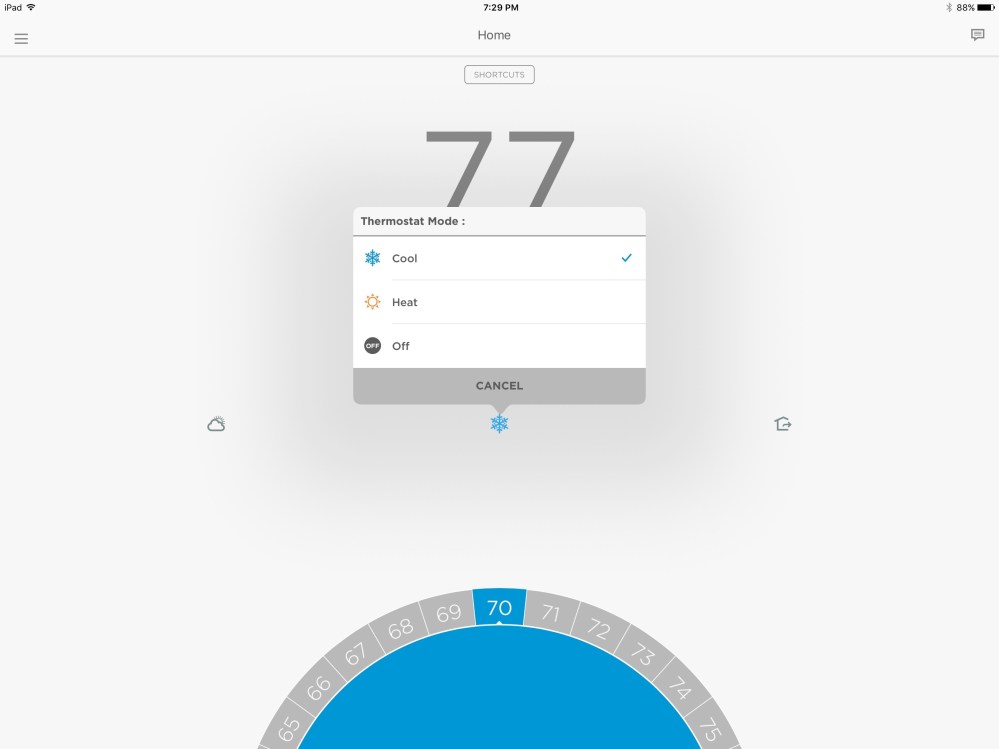 Compared to the ecobee app, Lyric’s iOS app is brighter and isn’t plagued by visual stutters. Instead, the bottom presents a familiar half-dial where you can set the target temperature, the top features the actual inside temperature, and in between you’ll find inside humidity and shortcuts for the weather forecast, cooling/heating/off toggles, and the away mode button. While the app is visually attractive and fits in with iOS (aside from the hamburger button), Lyric’s weak spot here is that the iPad version disappoints as simply a scaled up iPhone interface; ecobee shines here as its iPad app is stellar.

A less-than-stellar iPad app aside, Lyric includes shortcuts that act as recipes for automation that should satisfy advanced users plus there’s a functional and good-looking Apple Watch app.

The iOS app has a nice interface for setting up a geofence based on your preference for when you want Lyric Round to enter and exit away mode, which saves you money when you don’t need your home heated or cooled.

The Lyric app is also smart about factoring in multiple family members in a single household: you can share control access and settings with other members, and let Lyric factor in when the first person arrives home or the last person leaves to avoid freezing your family when you’re away.

The only downside here compared to ecobee, which uses location sensors, is that the app puts the persistent location arrow in the status bar which I try to avoid as a personal preference. Optionally, you can turn on notifications from the Lyric app to be notified when your system switches to and from away mode. I found these nice in testing to make sure everything was working properly, but I’d likely turn these off beyond that. 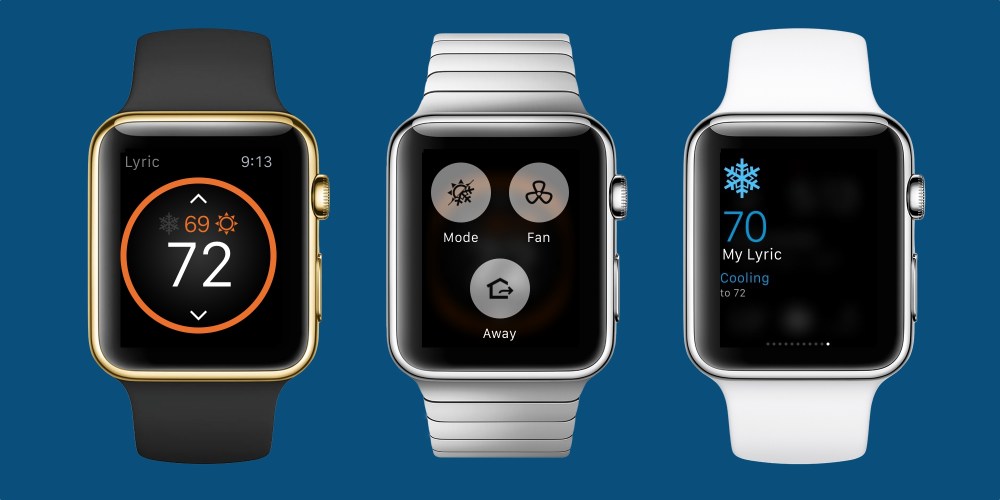 Deep pressing the display offers options to change heating/cooling/off modes, toggle the fan between auto/circulate/on, and activate away mode for 2/4/6/12 hours. There’s also a glance for quickly viewing the thermostat status from the watch face. The app doesn’t appear to be updated for watchOS 2 yet, however, so there’s no watch face complication (widget) and navigating between menus takes a little more loading time than it otherwise could. 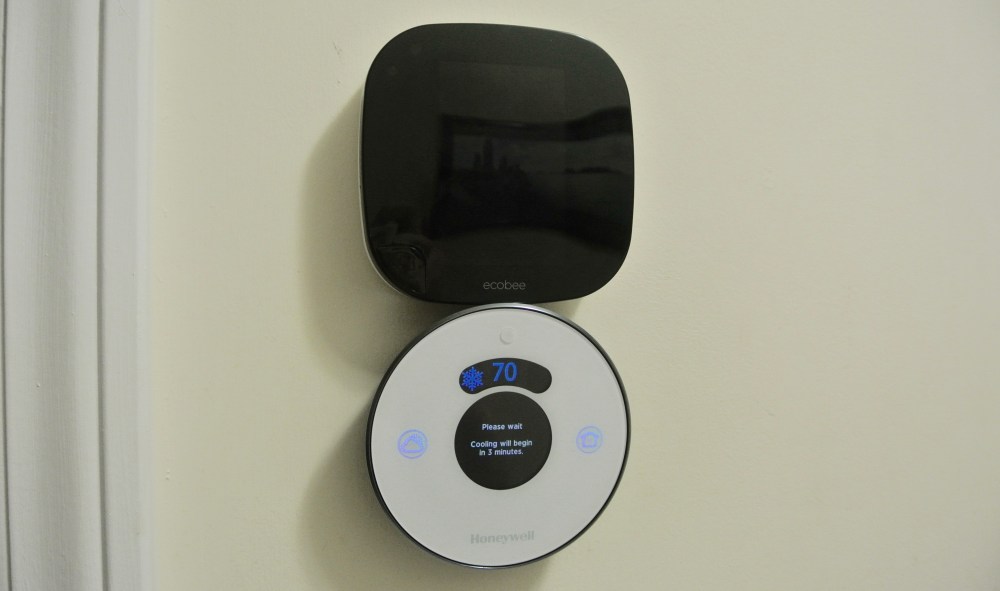 Overall, I would recommend Honeywell Lyric Round to anyone looking for a HomeKit connected thermostat that wants a traditional look and basic Siri controls. The design doesn’t scream smart thermostat, but factors like lighting up when you’re near and glowing blue or orange when you change the temperature are neat. The build quality is also impressive; whereas ecobee3 is static and plasticky, Lyric Round is noticeably smaller, made of nicer materials, and features a pleasant rotating dial and optional sounds. (Note the occasional loading screen as seen above.)

Lyric Round also factors in outside temperature and inside humidity when heating or cooling your home, and it can potentially save you money on your electricity bill each month if you use the away mode. The ecobee3’s interface is a bit more detailed and probably more ideal for advanced users; Lyric’s software also lacks web control (although you can control it over cellular from the apps) and detailed data on energy savings. Lyric is simpler, too, in that it’s self-contained whereas ecobee3 uses optional sensors in other rooms to be smarter (this is a plus for more accurate heating/cooling, but additional sensors add to the price). 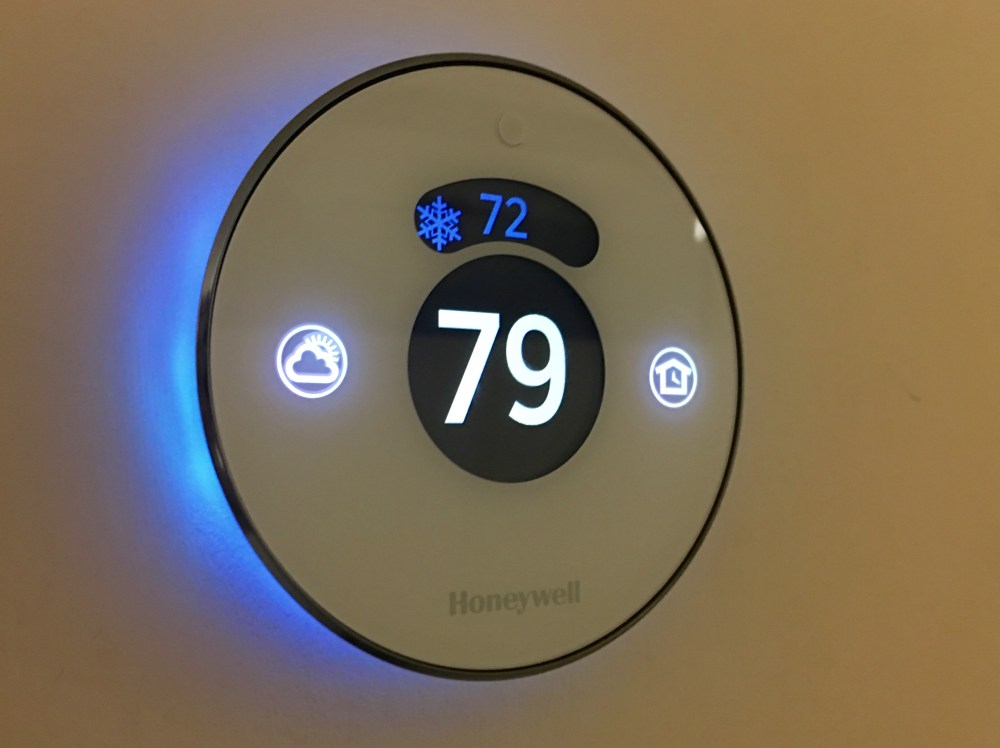 If you’re in the market for an attractive, modern smart thermostat with HomeKit support for Siri control, the Honeywell Lyric Round Wi-Fi Thermostat (2nd gen) is available for $249 from Honeywell and The Home Depot.