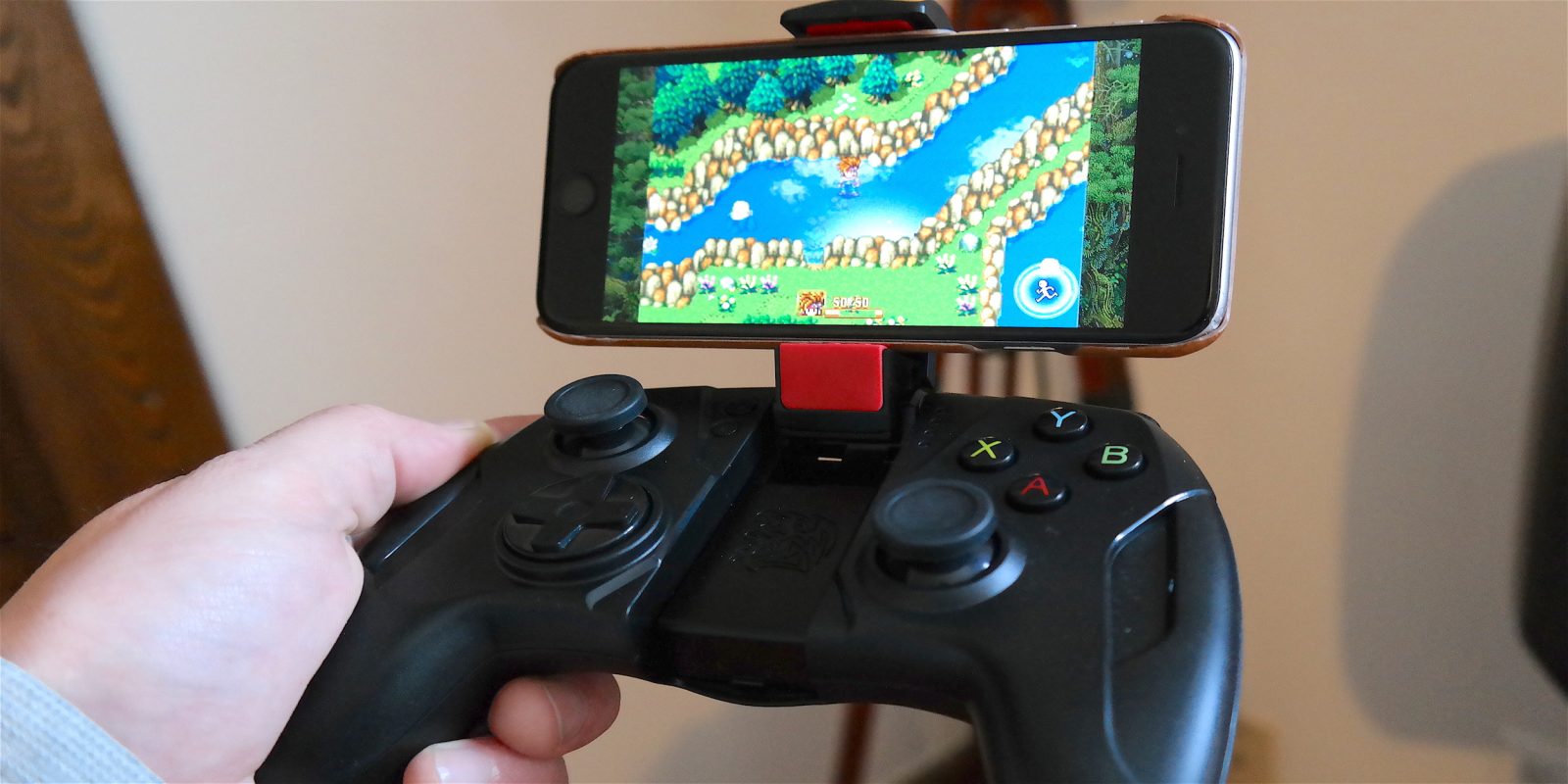 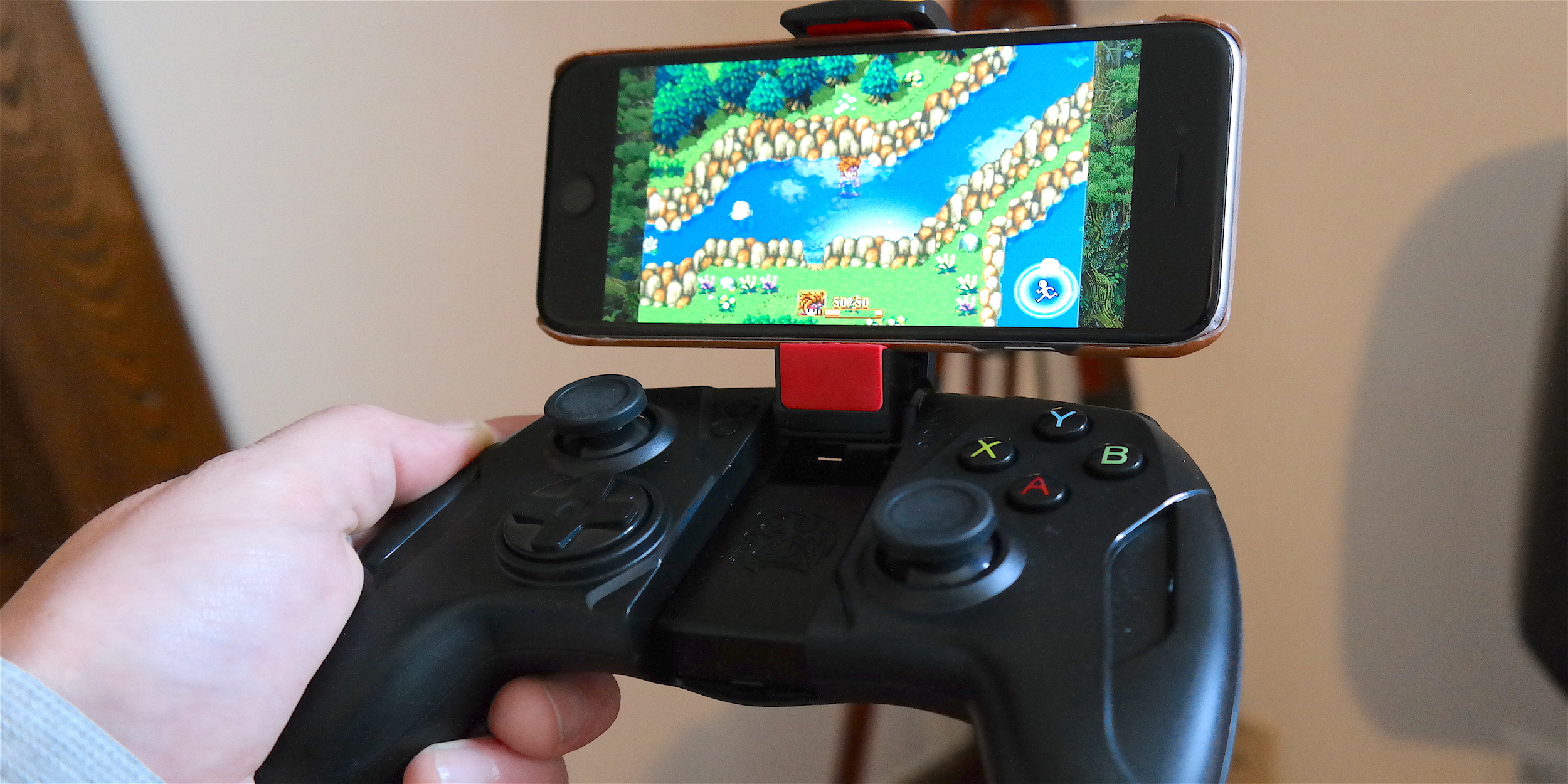 It’s been a while since we’ve checked in on the state of iPhone and iPad controllers, but I have seen some improvements since we first covered some of the shortcomings with the early batch of game controllers that came out under Apple’s Made-for-iPhone licensing program. Today I’m taking a look at the new Tt eSports Contour MFi controller, a new $65 option that includes a classic Xbox-style design and a built-in stand to hold your iPhone and turn it into a true handheld game console.

With the first crop of the official Apple certified gamepads, build-quality was a big part of the issue, especially at the $99 introductory price the controllers were going for at the time. Fast forward two years and we’ve got at least one controller on par with its console counterparts in both price and quality with the Tt eSports Contour. That’s why the build quality of the Contour is one of its most notable features. This thing feels as solid as any console controller, and in many ways feels a little more substantial. It accomplishes that without being too bulky, however, and I thought the controller felt great in my hands. For the most part, you won’t feel shortchanged when comparing it to any current gen Xbox, PlayStation, or PC controller. 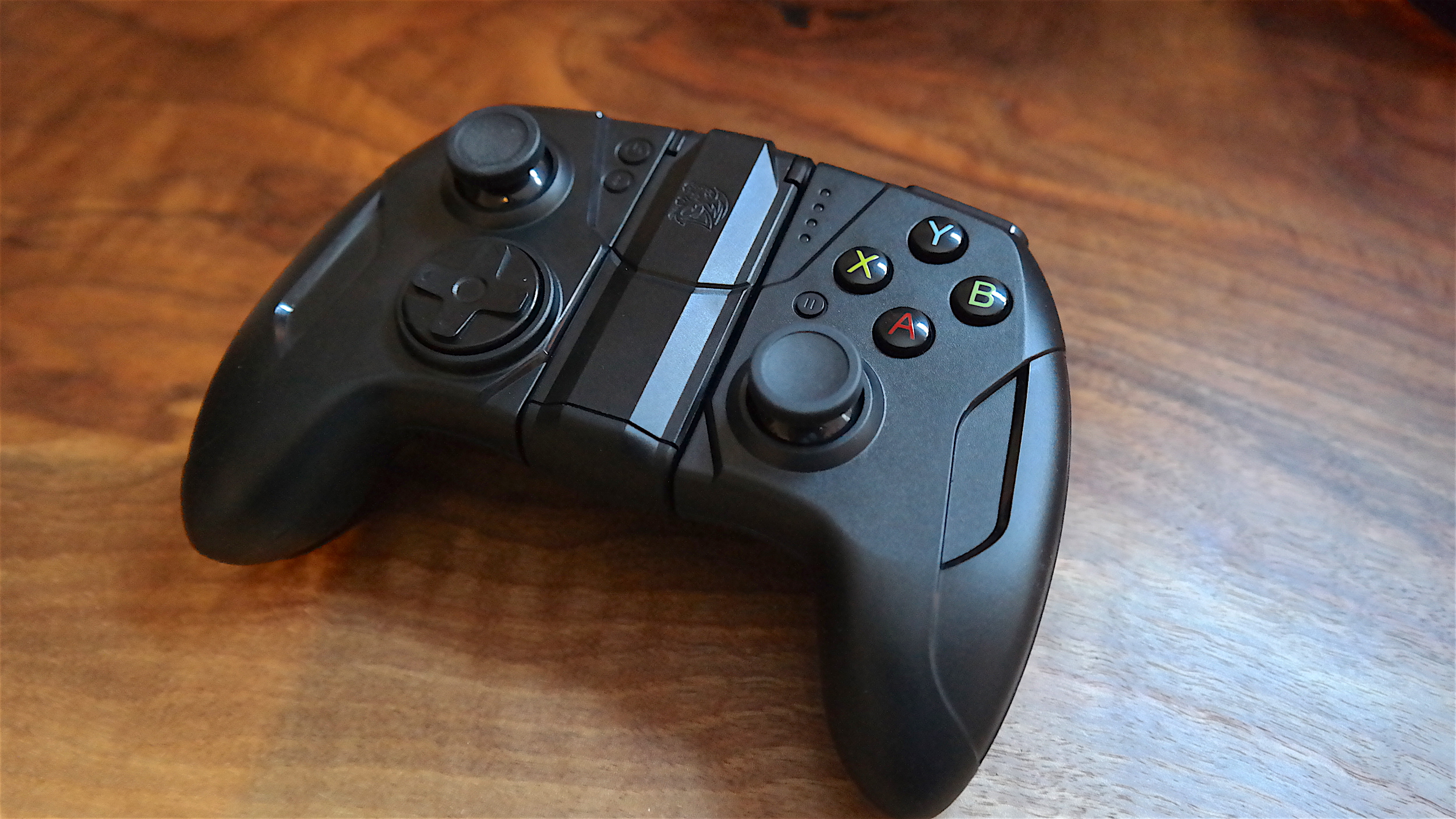 That’s with or without using the arm that holds an iPhone or iPod, which like the controller itself isn’t flimsy in the least. The arm attaches securely to the controller when not in use and it’s lined with a soft, thick lining of rubber to ensure no scratches on your device. It extends up to 3.75 inches wide, which allows you to fit in any iPhone or iPod touch in landscape view with or without a case. 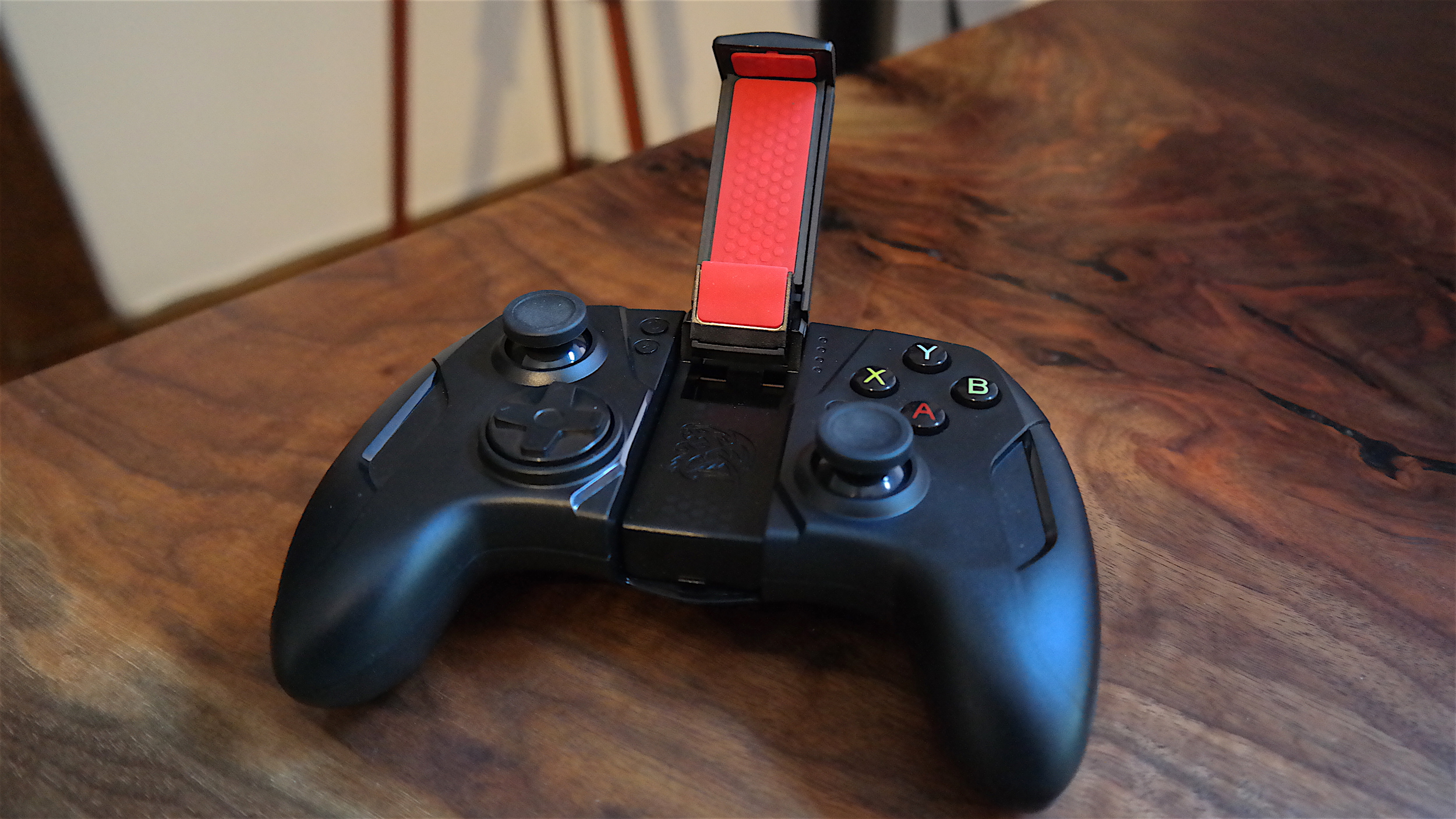 There’s not much you can do to adjust the viewing angles of a docked device, and because the device connects over Bluetooth and isn’t docked via a Lightning connector, there’s no opportunity for any type of passthrough charging setup. But I had no complaints with the viewing angle of the device relative to the controller, and it’s a big improvement when it comes to arm or neck strain versus just holding an iPhone while gaming. In other words, the iPhone screen ends up at an almost eye-level position when holding the controller comfortably. 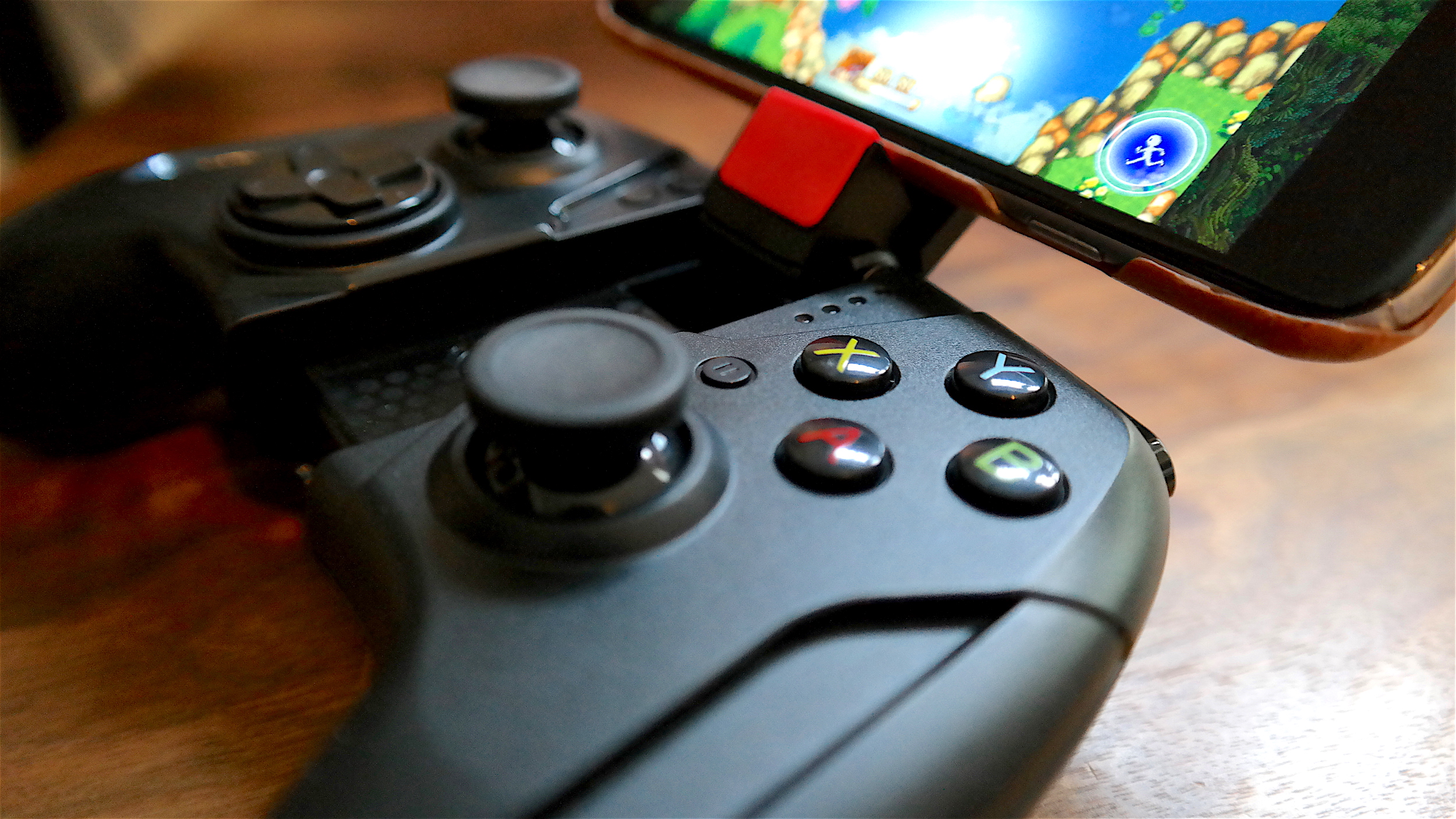 As pictured throughout the review, the controller gives you the usual MFi controller button setup, which is essentially an Xbox controller with X, Y, A, B face buttons, right and left joysticks, an old-school D-Pad, and two shoulder buttons on each side with a trigger-style button for the ones in the rear. You’ll also find charging indicator lights on the front, and the usual power and Bluetooth pairing mode. 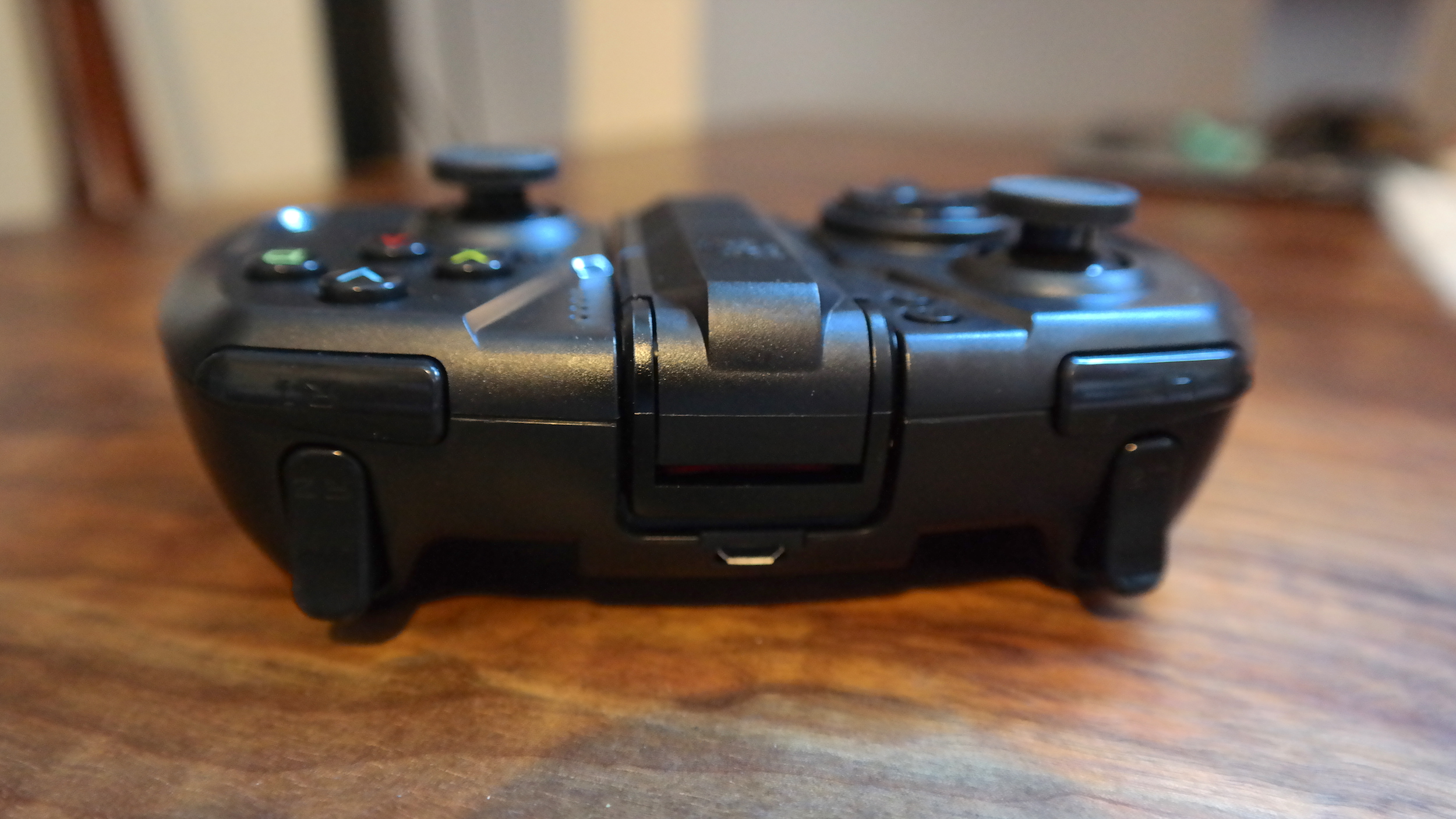 When it comes to actually playing games with the controller, I didn’t run into any issues in the few weeks I’ve been playing with and testing it, of course with supported games on mostly iPhone. Button responsiveness and fit and feel all felt great in extended gameplay sessions, as I expected based on my initial thoughts on the build quality described above. The joysticks are perhaps the only components that could use some improving, but in my experience that has been the case with all MFi controllers and it’s something Apple controls through its specs for accessory makers making controllers to some degree. The Contour’s joysticks do have a nice grippy texture like a PlayStation controller which I liked, and they aren’t undersized like many other MFi controllers before it.

If there are a few shortcomings of the Contour controller, they’re lack of Lightning charging and battery that doesn’t last quite as long as some of the newer models from competitors— like the new SteelSeries Nimbus controller we reviewed a few months back. But those controllers have there own downsides, like lack of an arm to hold the iPhone and turn it into a true handheld console style setup, the main reason I personally tend to use iOS controllers in general. If you want an MFi controller with a built-in arm, and can put up with the 10+ battery life on your current gaming addiction, then the Tt eSports Contour delivers in every other way at a price ($65) that’s competitive with anything else of the same quality.

You can buy the Tt eSports Contour MFi controller for $65 now from Amazon.