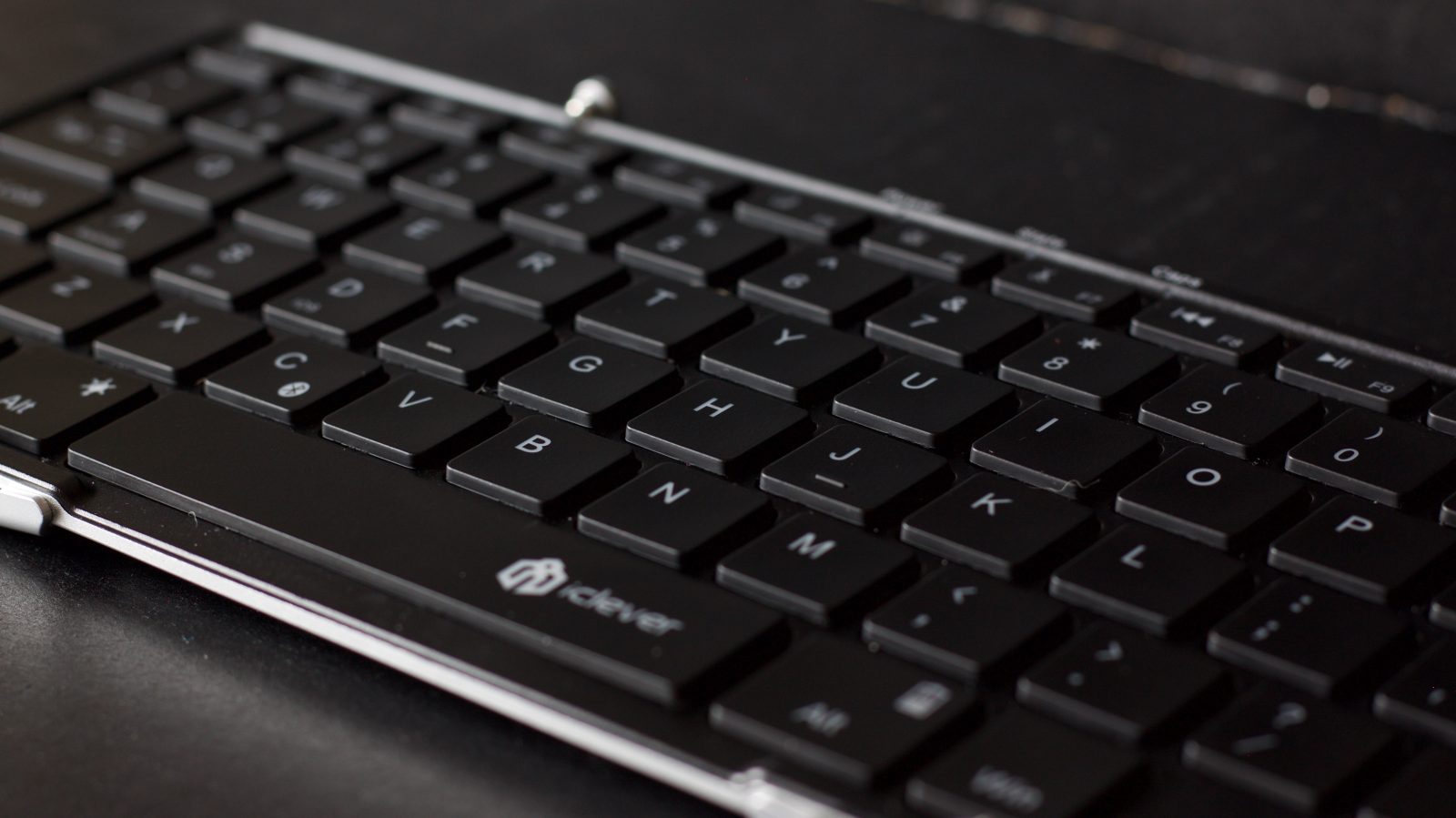 I’m not a major believer that Apple’s iOS devices can quite fully replace the PC and Mac in most scenarios, at least not for me, and not quite yet. I’m a keyboard fiend, using shortcuts on the keyboard almost more often than I use my mouse. These doubts were ready to be tested when I saw the progress that iOS 9 brought for third-party developers within the iOS ecosystem. With the new SDK, developers were getting the chance to integrate keyboard shortcuts into their iOS apps just like a Mac app. It was then that I knew it was time to start looking for a portable keyboard to take around with me.

This presented a new problem for me. There’s a vast amount of Bluetooth keyboards out there, and I didn’t want to just carry Apple’s bulky Bluetooth Keyboard around. I needed something with a full keyboard size, good battery life, and durability. After a few months of searching, and reluctance on spending money on what I considered an unknown, I gave up my hunt.

I nearly forgot about my keyboard journey until a few months when iClever reached out to me asking if I wanted to take a look at their iOS compatible Bluetooth accessories. I gladly accepted the offer, and began by taking a look at their Tri-Folding Bluetooth Keyboard. Everything I read online from the listing on Amazon made it seem like it could fit neatly into everything I had been previously searching for, so I was excited to get my hands on it.

From the very start of my unboxing, I was impressed. The keyboard arrived in a thin and well designed box including the keyboard itself, a carrying pouch, and a micro-USB cable. I didn’t expect a carrying pouch when I opened the packaging, so I was happy to see that small touch added. Before even unfolding the keyboard I knew I would be able to keep it safe when throwing it in my bag.

The backing of the keyboard is made with aluminum alloy, with plastic covering its hinges. The combination of the two seems to balance out to a solid and durable construction. Unfolding the keyboard provides an almost rubber-like, yet satisfying snap as the hinges extend flat. When fully laid out, I don’t question that this keyboard feels like it would last as long as any other keyboard I’ve owned.

The keyboard when folded is about as thick as two iPhone 5’s stacked on top of each other. Not something I would consider thin by any stretch of the imagination, but I also knew it came with the convenience of being a full-sized keyboard when unfolded.

The keys on the keyboard feel similar to Apple’s previous keyboard chiclet keys, but with a bit more squishy-pressure to them. I thought this would hinder my typing speed, but after running multiple tests I didn’t notice a slow down at all. I was typing at similar, if not faster, speeds when compared to my MacBook Pro’s keyboard.

My favorite part of these keys is that iClever opted to have them be backlit, and not just in one color. Users have a choice between three different backlighting colors, and two brightness levels: blue, red, and green at low or high levels. After some late night writing sessions, I felt the green was easier on my eyes. Having multiple options, even if I personally only stick to one, makes it feel like this product could appeal to a lot different people’s preferences.

During my trials with the keyboard I paired it with my Mid 2010 MacBook Pro, iPad 3rd Generation (the new iPad), and my iPhone 6. The keyboard’s keys show Android, Win, and iOS over the A, S and D keys respectively. I took this to assume that it would support switching between Android, Windows, and iOS keyboard configurations, but I could never quite figure out if I needed to explicitly instruct it to do so or not. When I paired it to my various devices, it handled the change automatically.

Note: I recommend that if you pair it to the Mac to use Jeff Benjamin’s trick and remap the keys to make them feel more natural.

The keyboard’s top row, the function keys, all have images that pertain to specific functions. Options like simulating a home button press, spotlight search, cut, copy, and paste. I wasn’t too sure if these were meant for iOS only as they didn’t work on my Mac at all. Unfortunately these keys also didn’t seem to match the MacBook Pro’s versions of its function keys, like adjusting brightness or launching Mission Control.

That said, I found myself frequently pulling out my iPhone to write articles inside of iA Writer, versus my Mac or iPad. This is where I got my first experience of what using an iOS device full-time could be like, and I was impressed. Switching between apps was smooth, most iOS app shortcut keys matched what was on my Mac, and I found myself infrequently needing to touch the screen. I knew that using my iPad would have been a more “true” experience here, but just the experience the iPhone lent was great unto itself.

In my day to day work, I normally rely on an Apple Bluetooth Keyboard paired to my MacBook Pro. For this review, I chose to use the iClever keyboard full-time for a week. After my first full day of work, I began to question when the battery would die. iClever states that with the backlit keys enabled there is about a 5 hour work time, and about a 300 hour work time with them disabled. I didn’t believe this at first, but after three work days (9 AM – 5 PM) of constant usage, I became a believer. I had decided not to do an initial charge on the keyboard after receiving it and would charge it once the battery had been drained. My initial one week trial of full-time usage soon became two as I continued to use the keyboard just to see when it would die. If eventually did die after about a week and a half and when it did, I found another reason for the included micro-USB cable…

Most Bluetooth keyboards offer one method of connectivity: Bluetooth. Seems obvious enough until you realize that the keyboard is charging with a micro-USB already, why wouldn’t you be able to use the keyboard over USB instead of Bluetooth when it was necessary? The first time the keyboard’s battery died on me was in the middle of a coffee shop and it gave me the perfect opportunity to test its USB connectivity.

I pulled out the USB cable, connected one end to the keyboard, the other to the Mac, hit FN + 2 (to enable the USB mode) and it was immediately detected by my computer. Mac OS X presented me the Keyboard Setup Assistant, and then I was good to go. I experienced maybe a full minute interruption in my workflow, and 30 seconds of that was just because I had never previously plugged the keyboard into the computer.

With all its positives, the keyboard is not without its quirks though. In the provided instruction manual, iClever states the keyboard can only be paired to one device at a time. I took that to mean that I could create a connection with multiple devices, and just disconnect and reconnect to each when necessary. In my situation (pairing with a MacBook Pro, iPad, and iPhone), I noticed that often the keyboard couldn’t pair to any of the devices until I made two of the others completely forget the Bluetooth pairing. This felt “wrong” as previous Bluetooth connection experiences I had told me I could just disconnect the pairing and that would be enough. That didn’t seem to be the case here with the iClever keyboard.

I also had some weird experiences where in the middle of me typing, the keyboard would just stop responding. It was especially evident when I had the backlight enabled. I knew that after 10 seconds of inactivity the keyboard would put itself to “sleep”, but this was happening in the middle of typing. About 4 times while I was typing I saw the backlight disable itself, and then about two-seconds after that the keyboard was no longer responding to my commands. At first I thought this was a battery life issue, but soon learned that simple closing then re-opening the keyboard (to power it off and then back on) helped. It wasn’t a huge issue, but every time it occurred I was more annoyed than the last.

After using this keyboard for a full month, I can honestly say I’m satisfied. It’s fed the desire I had in a portable keyboard experience, and added some features I didn’t even know I would want. Being able to use shortcuts on my iOS 9 devices with a portable keyboard has swayed me to think that a full iOS-only computing world is getting closer than I originally imagined. The backlit keys and USB connectivity alone make this keyboard a winner for me. I fully recommend it for anyone who is looking for a sleek and portable keyboard with great battery life. The quirks are just those, quirks, and I really think the positives outweigh them. I’ve kept it in the bag that goes with me everywhere, and haven’t been afraid to pull it out at a bar or two (one where I had originally written the first draft of this review).

Have any questions that I didn’t answer? Let me know in the comments below or by tweeting me @gregbarbosa.

The iClever Tri-Folding Keyboard is currently available on Amazon for $54.99. If you don’t feel the backlight option is necessary, iClever also sells another model for $35.99.

iClever was kind enough to send me an extra Tri-Folding backlit keyboard for one of our lucky 9to5Mac readers. If you’d like an opportunity to win it, sign up to our 9to5Mac Daily Digest email using the form above. If you’re already receiving our daily email, leave a comment below.