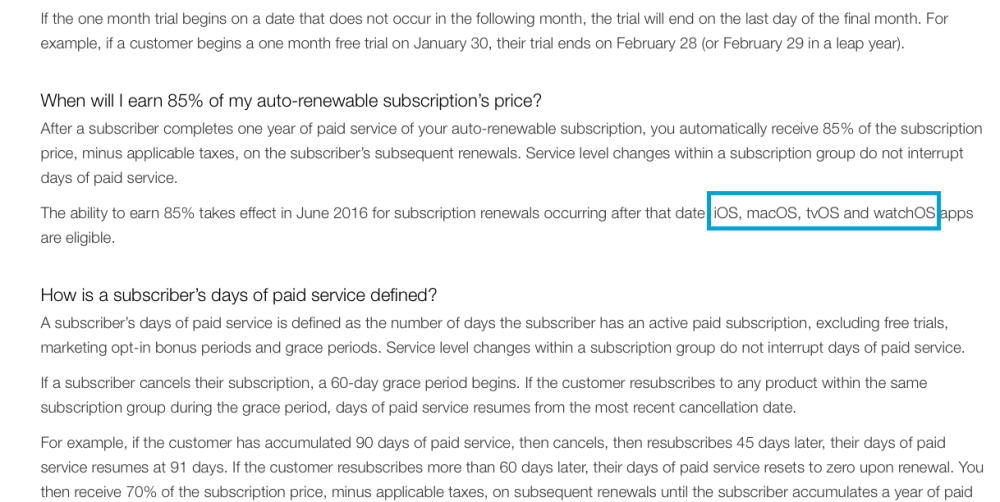 [UPDATE: Apple has changed the webpage to say Mac OS X, not macOS.]

It’s widely expected at this point that Apple will rebrand Mac OS X to simply ‘macOS’ next week at WWDC, but hidden in today’s announcements regarding the App Store was yet another hint at the change. In a FAQ from on the iTunes Connect website, Apple mistakenly refers to Mac OS X as ‘macOS,’ again prematurely hinting at the change.

There’s still some uncertainty as to whether the rebrand will be to MacOS or macOS, but at this point we’ve seen two leaks that use the latter and only one that uses the former. Although while iOS, tvOS, and watchOS all use lowercase letters, the difference could be that Mac is a proper noun while ‘tv’ and ‘watch’ technically aren’t without the Apple stuck in front of them.

Nevertheless, it makes sense that Apple would rebrand Mac OS X to macOS. It makes the Mac fit in line with the rest of Apple’s software lineup and gives it a more concise and understandable name. The fact that the macOS naming was included in today’s newly released App Store guidelines also suggests that perhaps Apple was originally planning on announcing the App Store changes at WWDC next week.

It’s likely that Apple will unveil the first version of macOS at WWDC next week. We reported earlier this year that the next major Mac release would include Siri as a tentpole feature, while others have reported some form of Touch ID could also be coming.

Apple is still planning at least one more release under the OS X moniker as it continues to release OS X 10.11.6 developer betas, but after that it’s looking more and more likely that the next release will be macOS or MacOS.