Top new Apple Watch Series 1 and Series 2 features – which one should you buy? [Video] 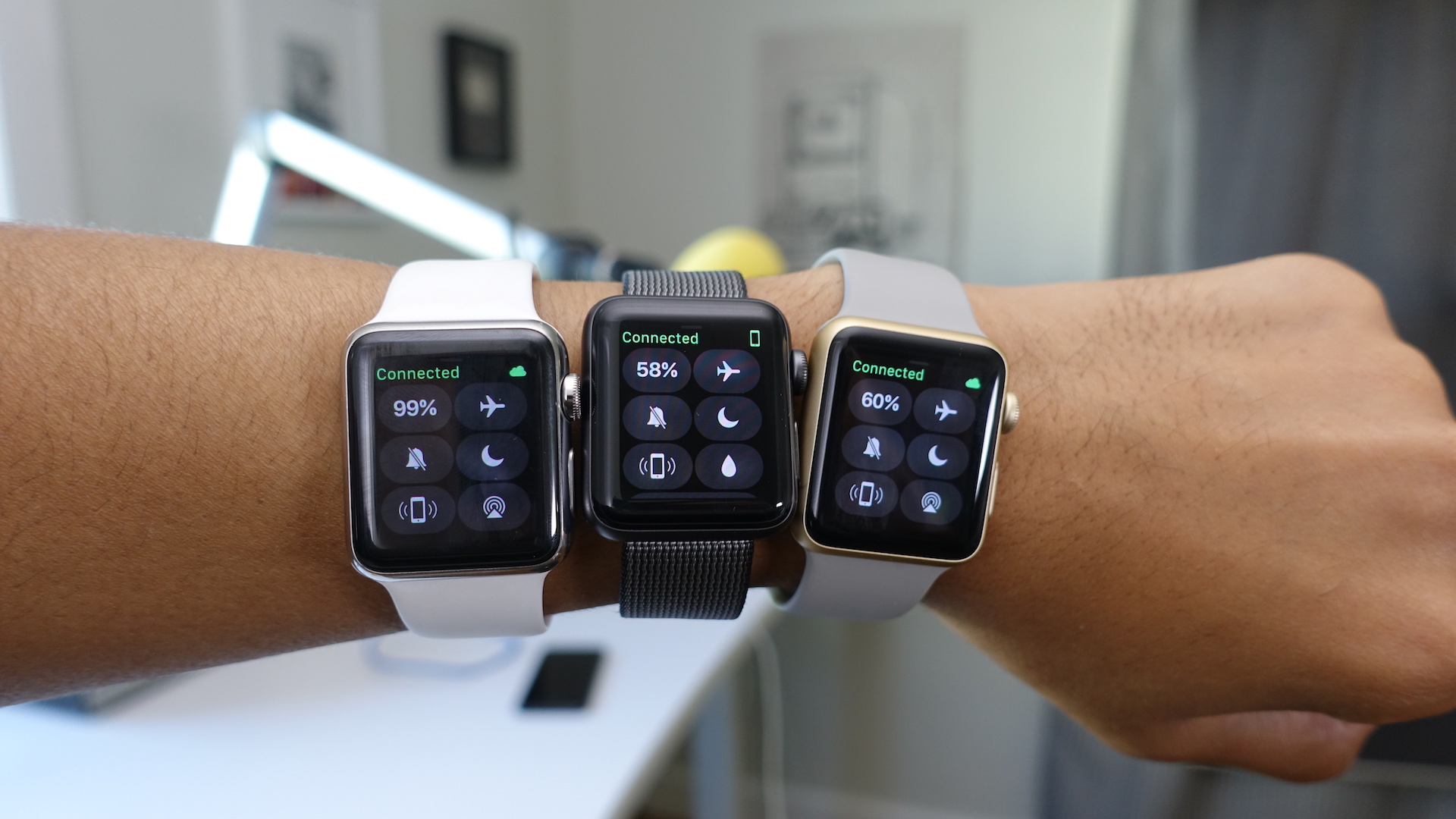 Along with the iPhone 7, I was able to go hands-on with both new flavors of Apple Watch: The Apple Watch Series 1 and Series 2.

Apple Watch Series 1 doesn’t contain much new in the way of features, but it does come with a faster processor, which makes it worth considering. Series 2 is a larger upgrade, but depending on how you use your Apple Watch, it might not be large enough to warrant an extra $100.

Whatever the case may be, both new watches are much better than the notoriously slow original Apple Watch, which Apple no longer sells. Another thing that flew the coop with this latest update is the somewhat confusing Apple Watch Sport nomenclature. Now, it’s just Apple Watch, and you can get it in either Series 1 or Series 2.

Watch our hands-on video for an explanation of the new Apple Watch and a look at several of its new features.

Eagle-eyed customers will notice the presence of a new air vent on the side of the Apple Watch Series 2. You may also notice that the Series 2 Apple Watch is slightly thicker, although the increase might be imperceptible to most users.

The wording on the back casing of the Apple Watch is also updated to differentiate the two series’. Of course, there are other differences to consider as we’ll discuss in the remainder of this post. 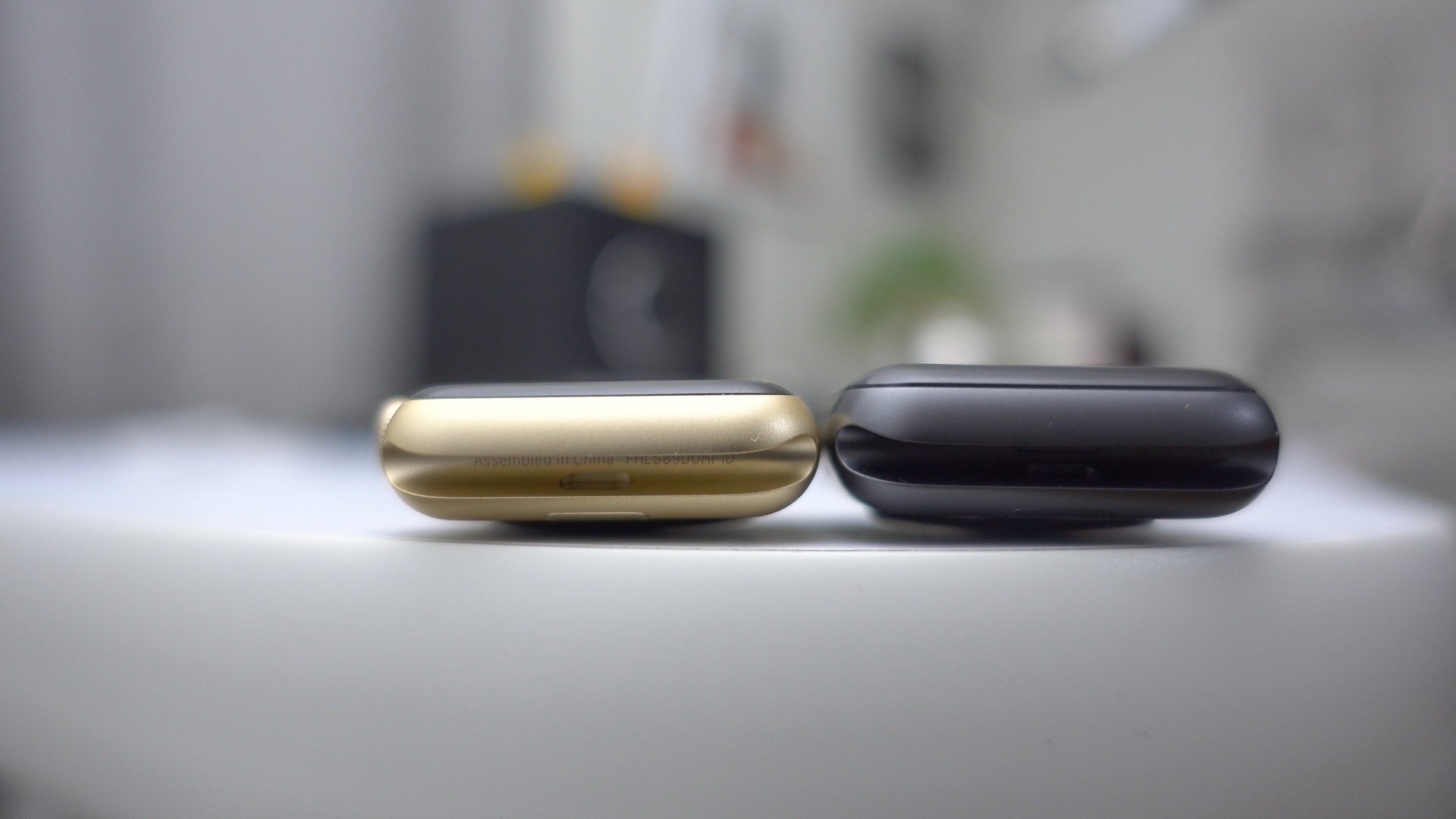 Apple Watch Series 2 is 0.9mm thicker than Series 1, but it’s hardly noticeable on the wrist

Both Series 1 and Series 2 include a faster new dual-core processor. Since you can’t just fire up GeekBench for the Apple Watch, you’ll have to take my word for it. Or better yet, just have a look at our hands-on video below that pits the new Apple Watch against the original model.

watchOS 3 went a long way towards improving performance, even on the OG watch, but the Series “0” watch was still abysmally slow. The new S1P (I’m guessing the P stands for…performance?) and the S2 chips deliver real world speed improvements to vital areas. Hence, launching apps is faster, restarting the Apple Watch is faster, doing virtually anything else is noticeably faster. 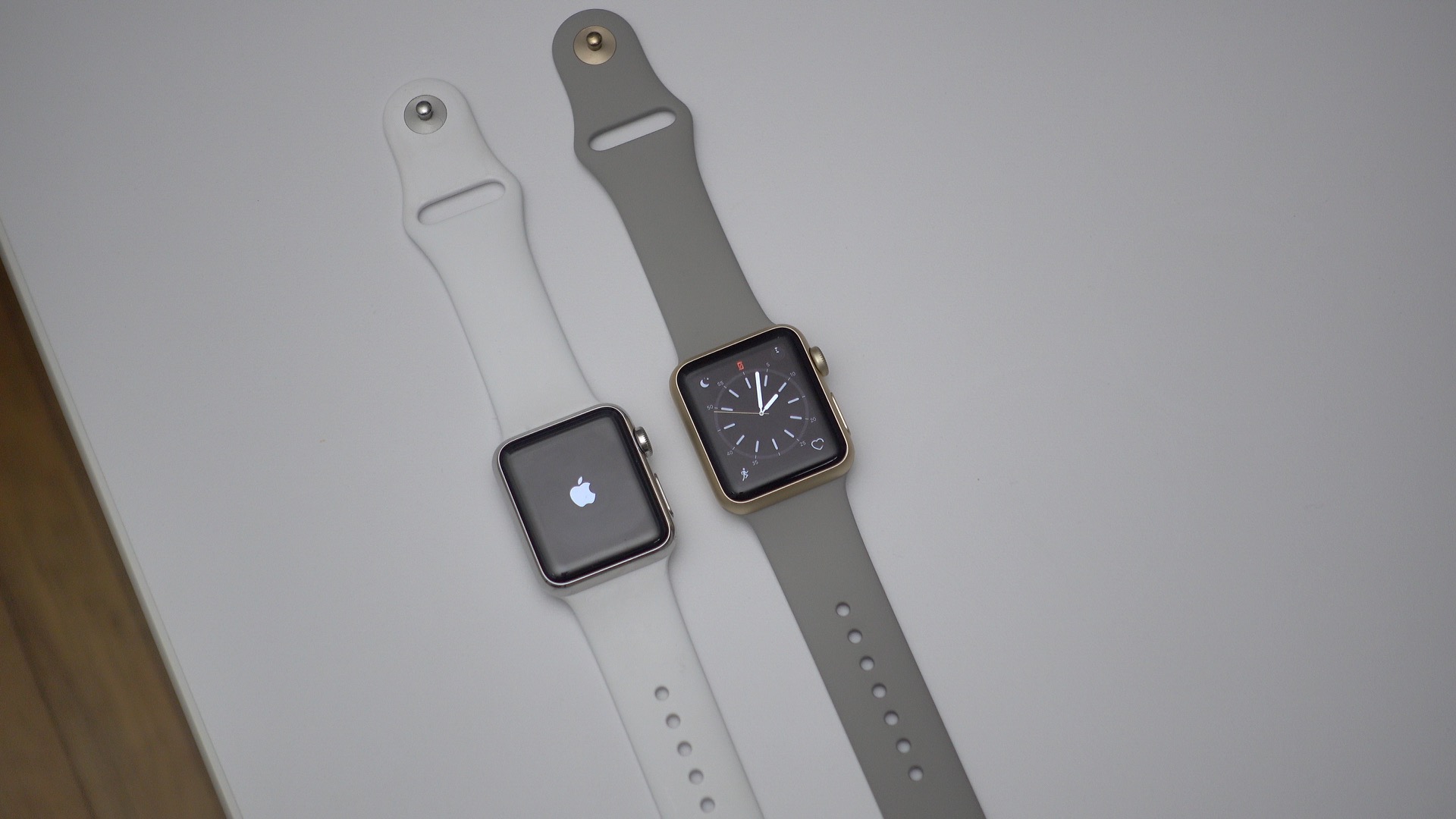 Both the S1P and the S2 appear to be the same chip, except one — the S2 — features built-in GPS. Therefore, if you do not need GPS, it’s one less reason to opt for the Apple Watch Series 2, saving at least $100 in the process.

If you’re someone who regularly engages in outdoor workouts, you’ll probably want GPS to more accurately track your efforts without needing your iPhone. If that’s the case, then you’ll definitely want to go with Apple Watch Series 2. That’s because, as noted, Series 2, unlike Series 1, includes built-in GPS. Read Zac’s hands-on review of Apple Watch Series 2, as he’s much more excited about the GPS feature than I am, and will no doubt expound on the feature.

A brighter display means that it’s easier to see what’s on the screen when in bright, direct sunlight. If you use Apple Watch for outdoor workouts, and you often encounter unreadable displays because of bright sunlight, then the Series 2 is highly appealing. 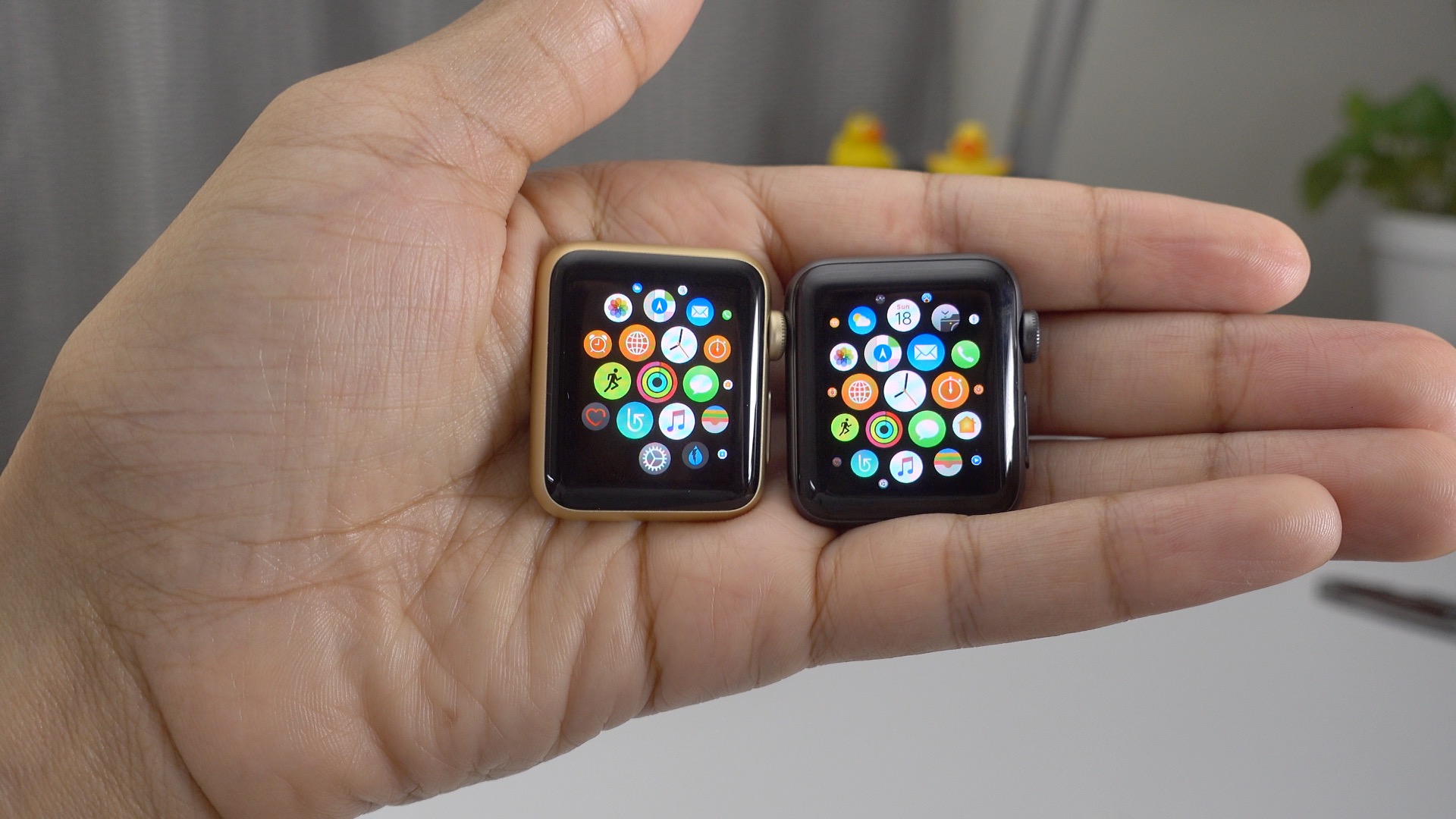 But even if you’re not someone who needs to read the watch face in bright sunlight, you’ll still appreciate the updated display. The display on the Series 2 watch seems as if it’s closer to the ION-X glass panel than before. It’s so bright that it almost appears that the information on the display is resting closer to the glass, which reduces reflections, and makes the overall experience more pleasing to the eyes.

Water Resistant up to 50 meters

I’ve been taking showers with my original Apple Watch since launch and have never had a problem. But now, I’ll feel even more confident about showering with my Apple Watch Series 2, thanks to its 50m water-resistant rating. 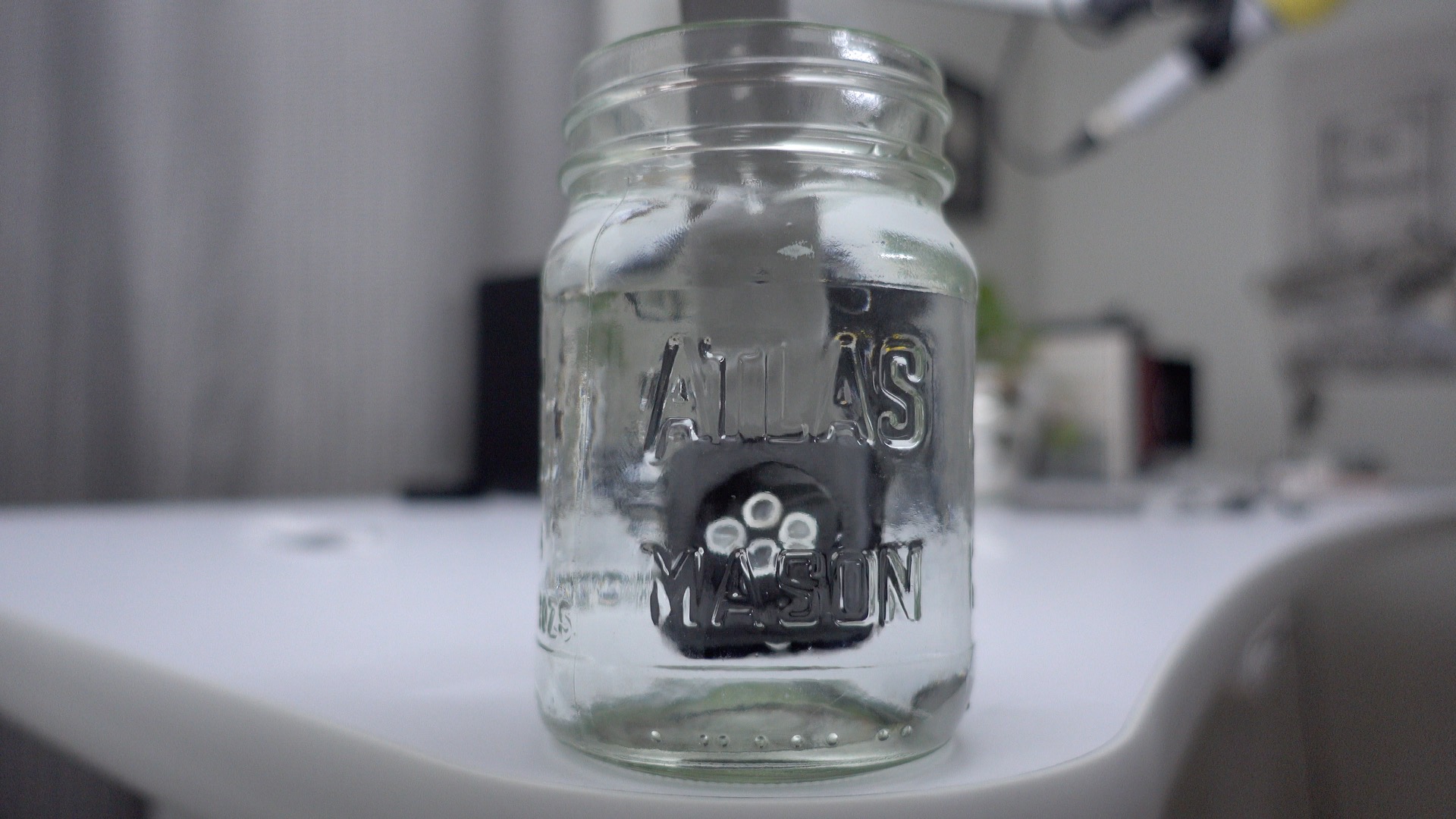 If swimming is a part of your normal workout, then it goes without saying that you’ll want to opt for the Series 2 Apple Watch. Not only is the Apple Watch 2 more water-resistant, but it comes with its own Pool Swim workout mode, a feature not available on Series 1 watches. 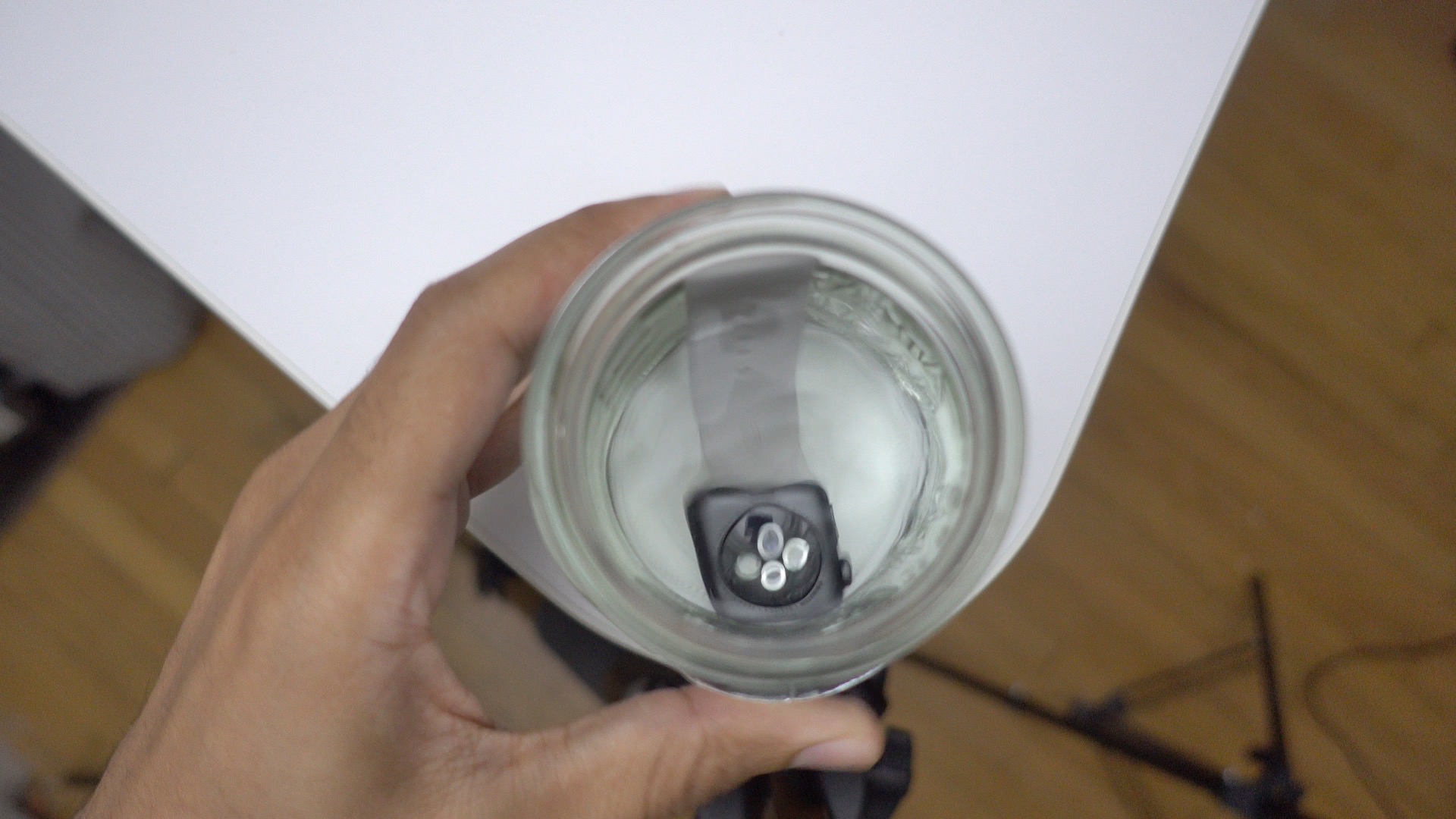 Hardly 50m, but you get the idea

For those of you who don’t swim as a part of a regular workout routine, you may consider the IPX7 water-resistant rating on the Series 1 model — the ability to withstand immersion in water up to 1 meter for up to 30 minutes — to be enough. 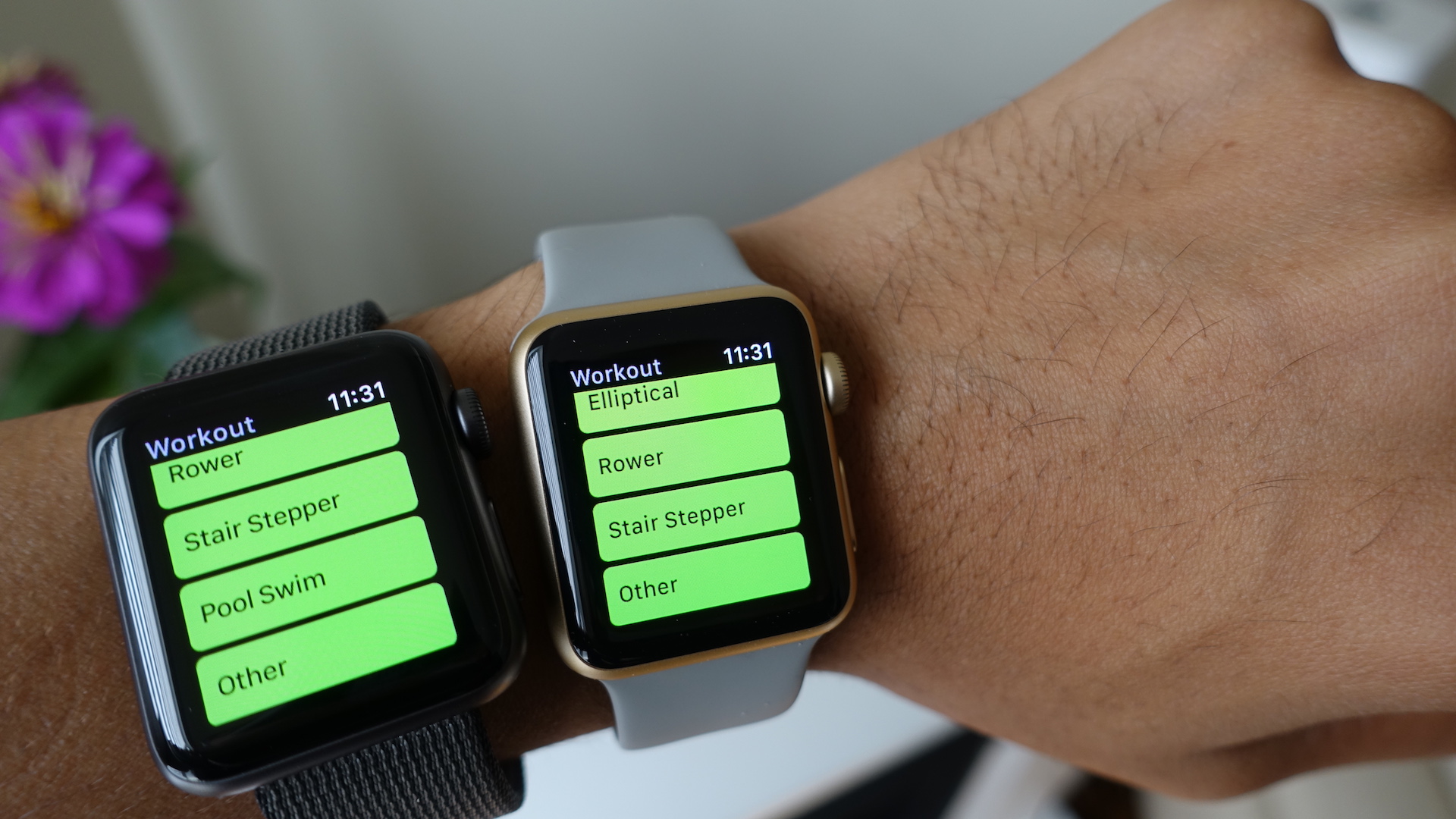 Because the Apple Watch Series 2 can accommodate deep dives up to 50 meters, Apple has created a way to force water out of the speaker after a swim. This is accomplished by means of a new Water Lock option, which appears in watchOS 3’s Control Center, and within the Pool Workout activity. 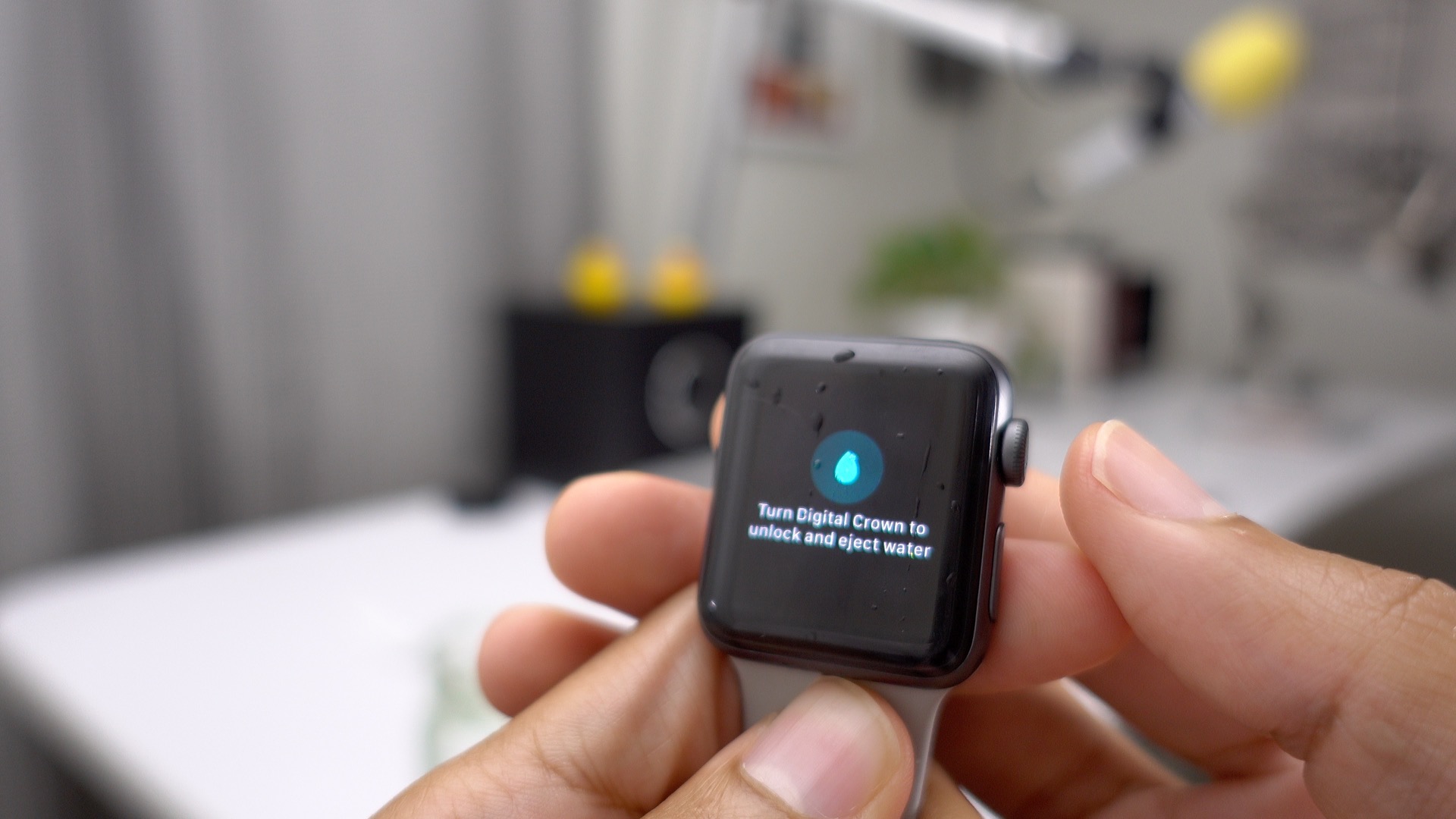 To access the new Water Lock feature, simply swipe up from the bottom of the screen to open Control Center. There, you’ll see the Water Lock button residing underneath the Do Not Disturb toggle.

Tapping the Water Lock button locks your Apple Watch, allowing you to turn the Digital Crown to unlock and eject the water. Water expulsion is accomplished by means of nearly a dozen audible tones, which create air that propels the water out of the speaker housing.

All Apple Watch Series 2 units come with a ceramic back. Series 1 units ship with plastic “composite” backs, like the ones found on the original Apple Watch Sport models. The ceramic back has a more premium feel and it’s harder than the composite back. The ceramic backs also include sapphire LED lenses, with those nice-looking metal rings. Performance-wise, there shouldn’t be any difference between the two backs, but the ceramic back does seem like it might hold up better over the long-term. 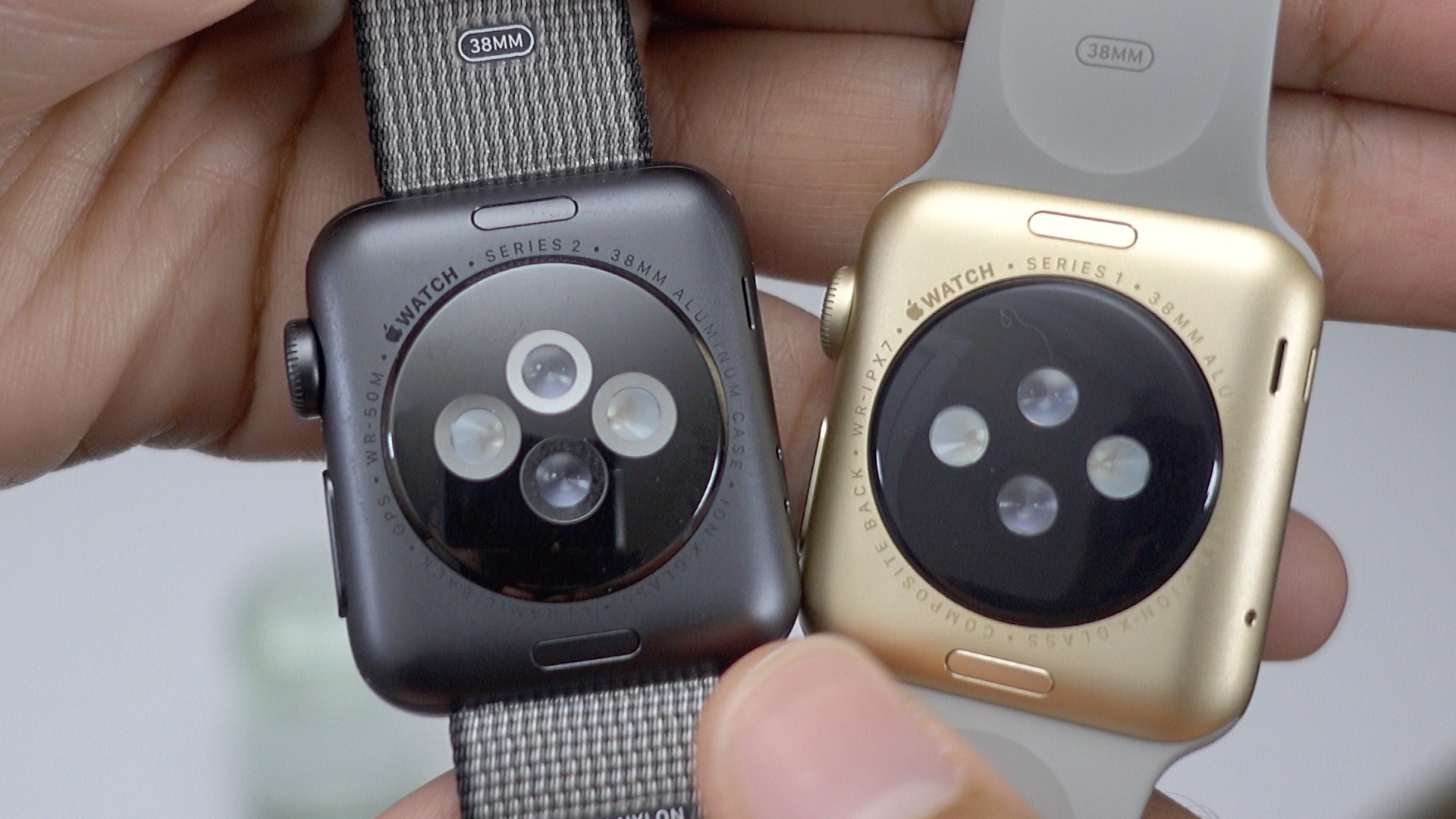 With Series 2, you have the option of buying an Apple Watch that includes a woven nylon band. Series 1 watches, on the other hand, only come with fluoroelastomer sport band options. 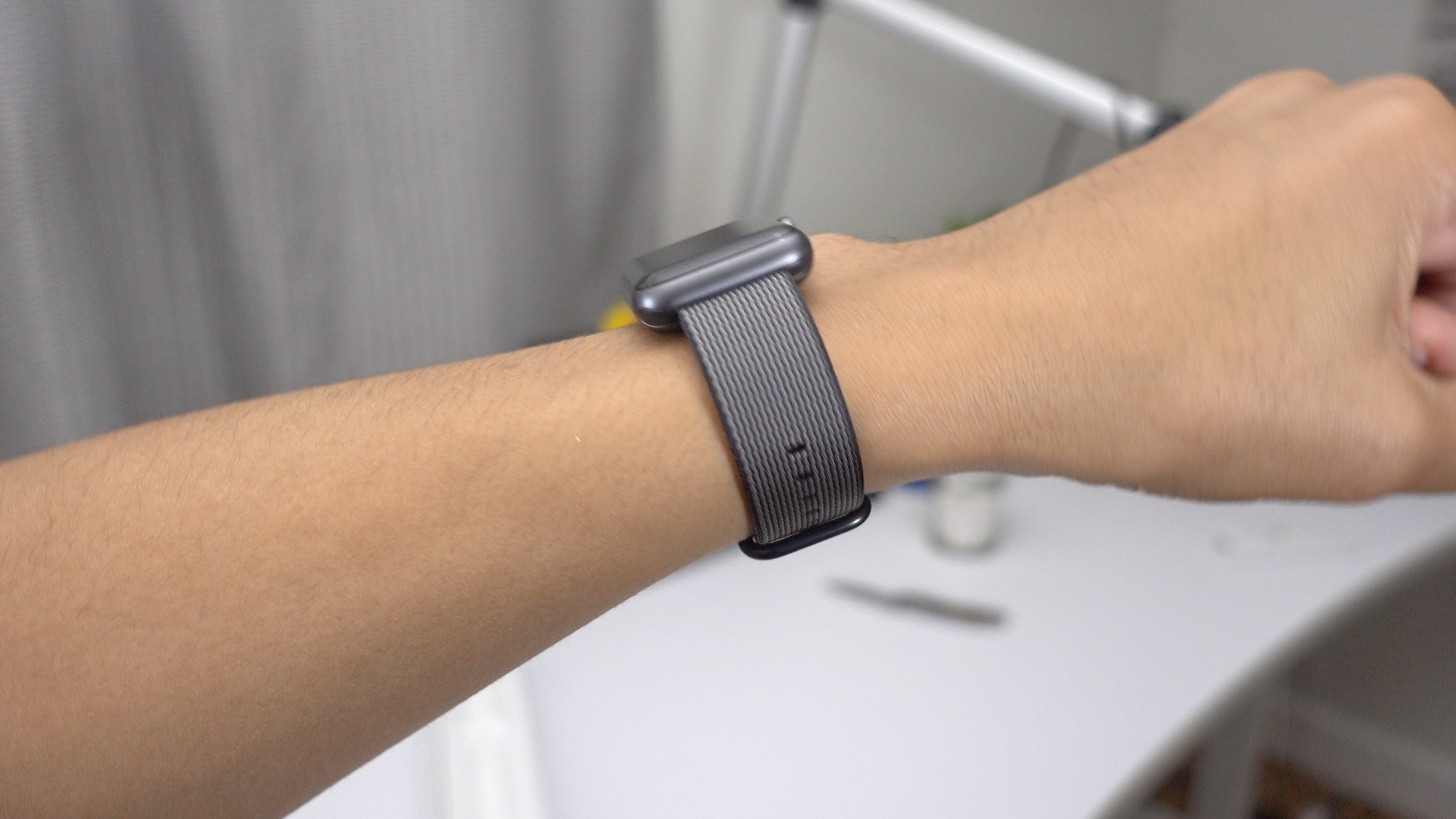 Another thing that differentiates Series 1 from Series 2 is the type of casing material and styles available. Series 1 watches are only available with aluminum casing, whereas Series 2 watches come in additional cases and flavors. With Series 2, you can get a stainless steel cases, or a Ceramic case for those with money to blow on the Edition models. There’s also the Hermès-branded model, and upcoming Nike-branded model.

All new Apple Watches come with watchOS 3 pre-installed. Watch our full watchOS 3 video walkthrough for a look at what’s new. 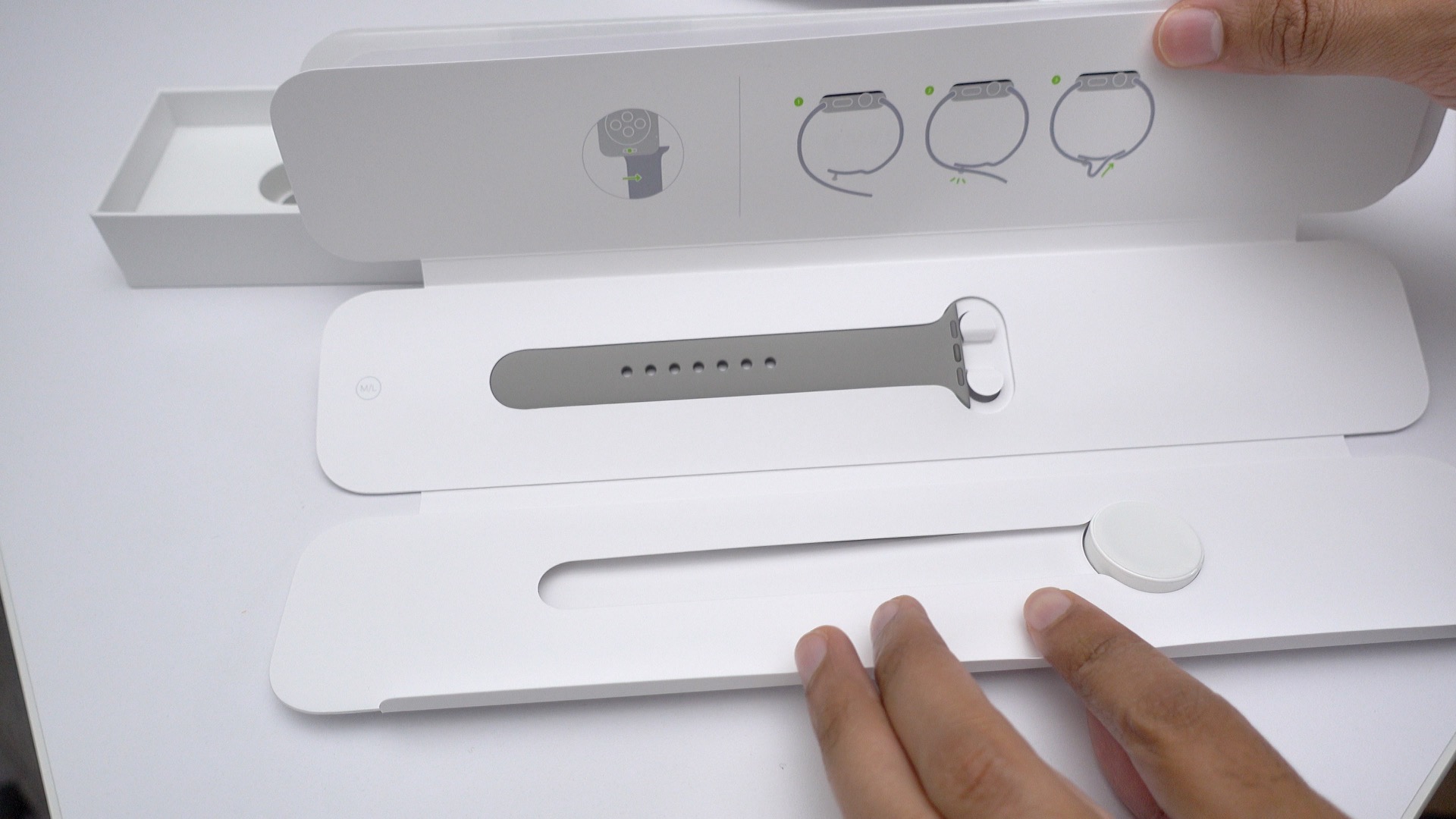 The Series 1 Apple Watch lacks a 5w power adapter, and is only available with Sport bands

Which one to buy?

If price is your primary issue, then it goes without saying that you should opt for the Series 1. It’s the cheapest Apple Watch, yet it still provides much better performance than the original version that launched last year. 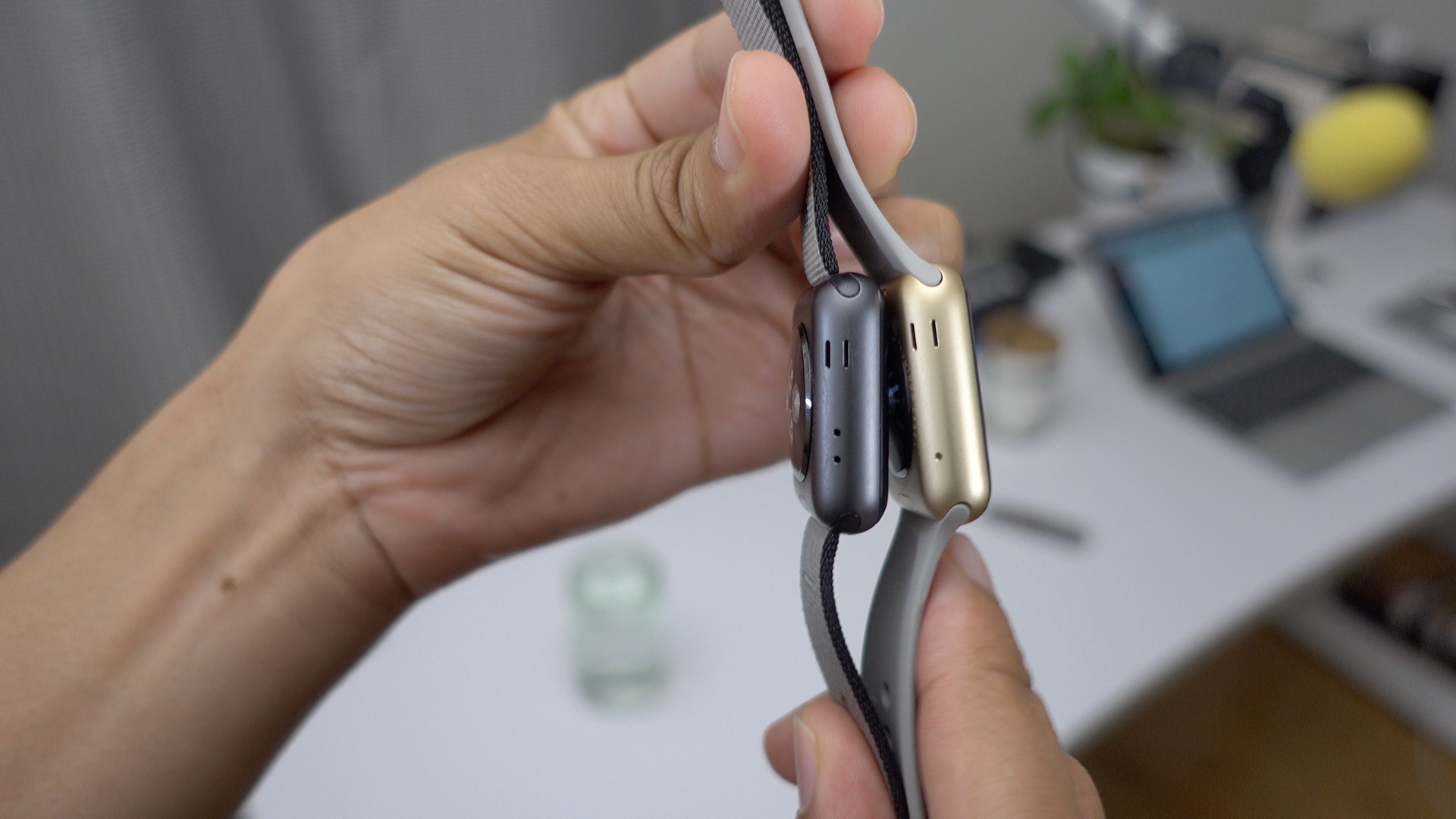 But what if money nor workouts are a factor? If that’s the case, then I still recommend going with Series 2, based off the improved second-generation OLED Retina display. The screen on the Apple Watch Series 1 isn’t bad at all, but the screen on the series 2 is much more vibrant and appealing to the eyes.