Hands-on: iPhone 7 Smart Battery Case – the good, the bad and the ugly [Video] 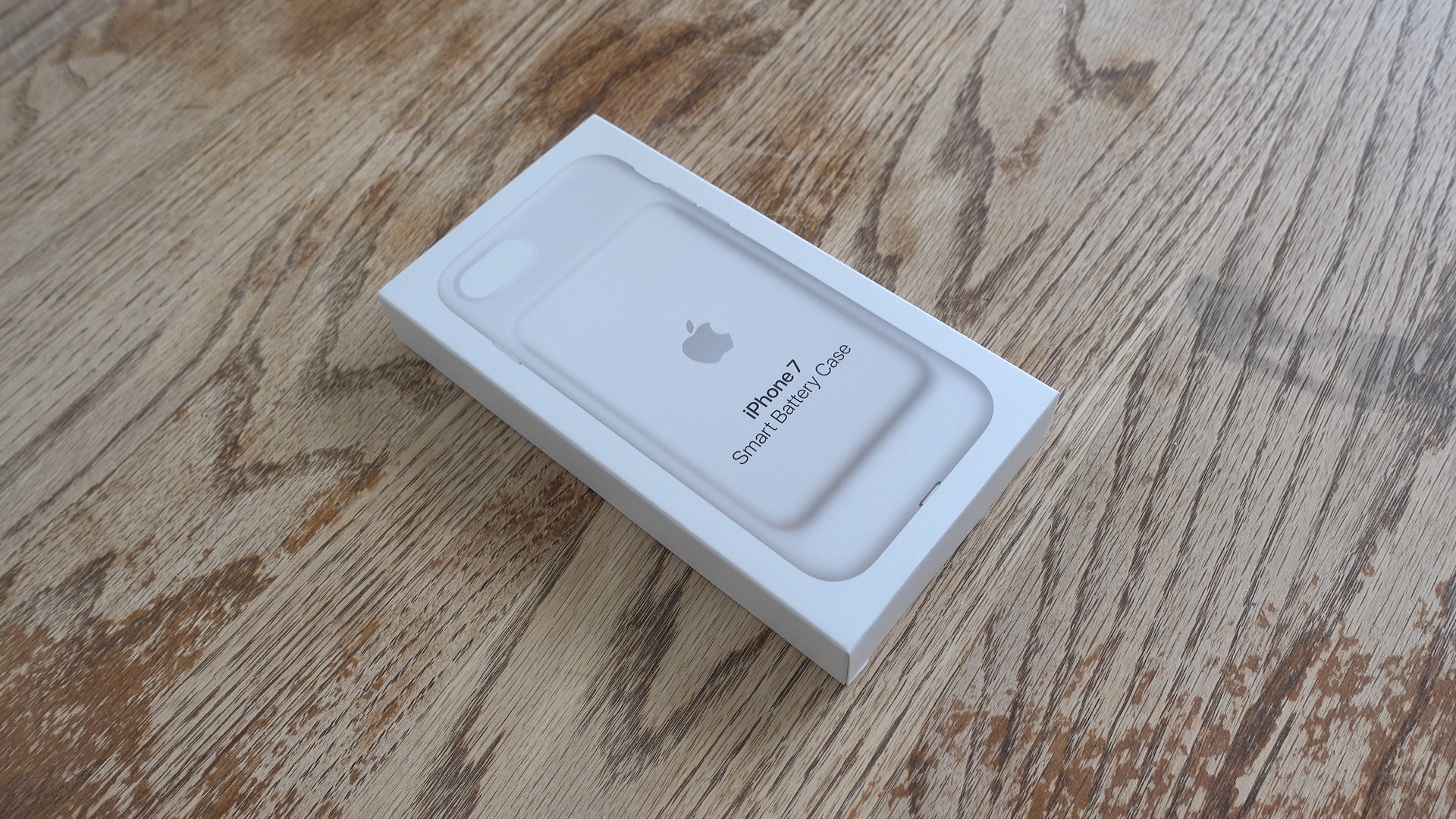 Despite its weird looks, I’ve long been a fan of Apple’s Smart Battery Case for the iPhone 6s. It’s a case that not only protects my device, but it gives me confidence that my iPhone will stay alive for the entire duration of a real world working day.

Should iPhone 7 owners consider using the new slightly-redesigned Smart Battery Case, and what exactly has changed the second time around?

It’s almost as if your iPhone is wearing a backpack, as the silicon material that the case is made with hugs every curve of the actual battery housed inside the case. This design decision lends heavily towards the case’s peculiar looks.

Add to the fact that the Smart Battery Case features a significant bottom lip, it’s quick to see why it isn’t winning any design awards. To be honest, it seems downright odd that such a design would escape from Cupertino’s test labs, but here we are in year two of its existence.

One nice thing to note about the case is that it is lined with a soft microfiber material. This will help to ensure that your iPhone remains looking swell while housed inside. This may be especially important to those of you who opted for the Jet Black iPhone 7, which is known for being susceptible to scratches and so-called micro-abrasions.

I would love it if I could use the iPhone 6s Smart Battery Case with my iPhone 7, but it shouldn’t be a huge surprise that last year’s case doesn’t fit this year’s iPhone refresh. If it wasn’t for the camera changes, then I’d probably be perfectly fine using the iPhone 6s Smart Battery Case with the iPhone 7. The one obvious change, the lack of the 3.5mm headphone jack, doesn’t matter nearly as much as the design changes to the camera housing.

The iPhone 7’s camera doesn’t properly fit inside of the old Smart Battery Case, making the two devices incompatible. Technically speaking, the case can still charge the iPhone 7, but you’d have to remove the phone from the case to use the camera.

The cool thing is that you can always use the old iPhone 6s Smart Battery Case as a backup charging solution of sorts. It’s easy to charge the case by itself, and you can even check the case’s charging status via the little LED that lives inside. With this in mind, I plan on keeping my iPhone 6s Smart Battery Case around, as it can be used as adequate secondary battery solution when traveling or in other situations where such a need may arise.

Other, somewhat smaller, changes are easily visible when comparing the two cases. The microphone hole has been replaced by a slot that lends the bottom lip a more symmetrical look. On the back of the case, you’ll notice that the Apple logo is now a shade of light gray instead of black.

Speaking of black, Apple offers the iPhone 7 Smart Battery Case in two colors: Black and White, while the iPhone 6s version of the case came in White and Charcoal Gray color schemes. With the absence of a Space Gray color option for the iPhone 7, along with the rise of Black and Jet Black, the color change makes sense. Apple was sold out of black Smart Battery Cases when I ordered mine, so I got stuck with white, despite the fact that I have a Jet Black iPhone 7.

Functionality-wise, the Smart Battery Case for iPhone 7 operates exactly the same as last year’s version. Your iPhone slides into the top of the case via the flexible fluoroelastomer hinge, and connects to the Lightning Connector housed at the bottom of the case. 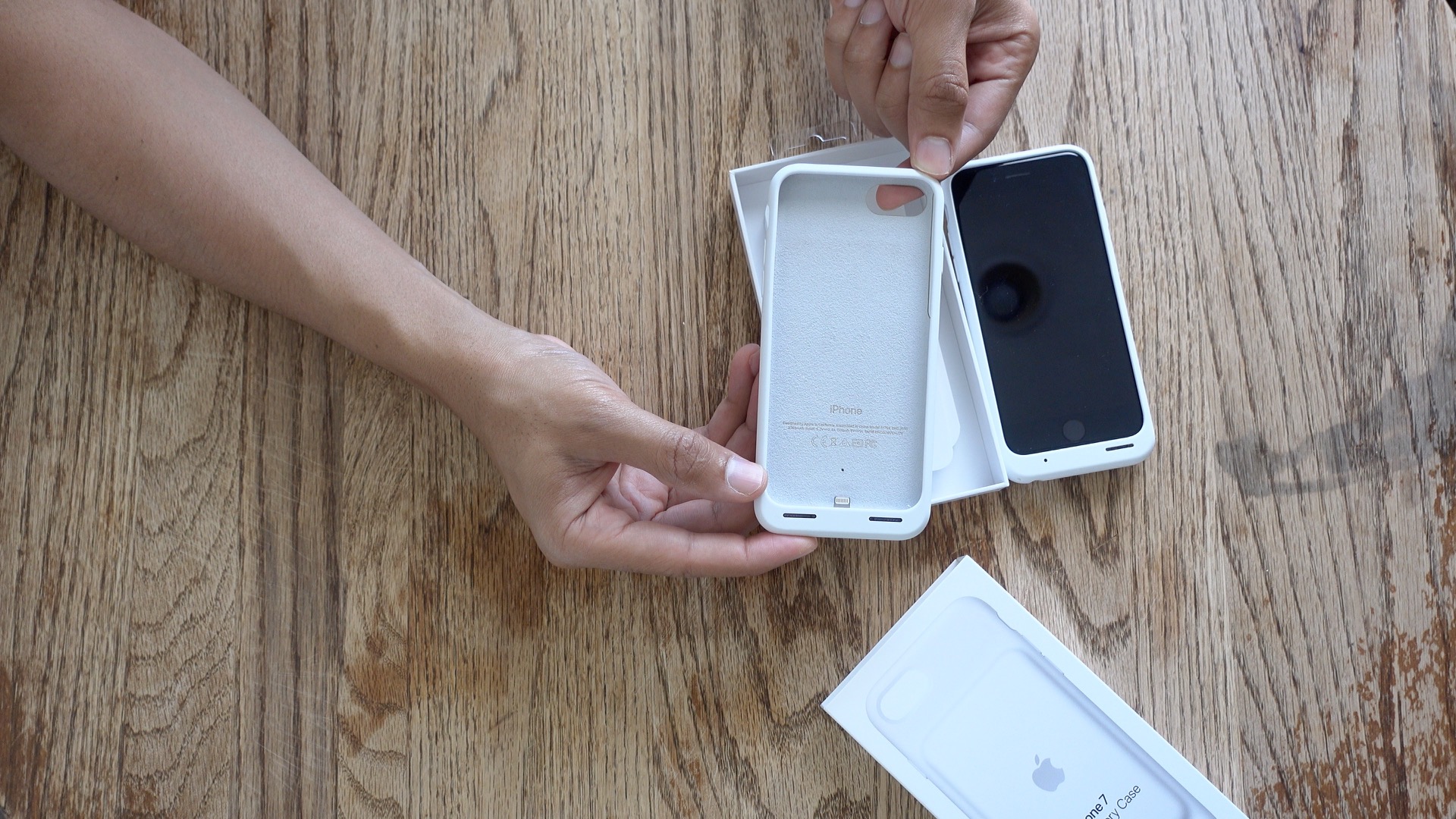 The Smart Battery Case’s Lightning port can also be used just like the Lightning port on the bottom of the iPhone 7. Thus, you can connect Lightning-enabled EarPods, Lightning Docks, or any other compatible Lightning accessories to your iPhone through the case.

The great thing about the Smart Battery Case is that you never have to remove it to charge it or perform any other maintenance. It can remain a permanent fixture on your iPhone 7. In fact, there are no buttons anywhere to be found on the case. Therefore, it’s always ready to use, and it handles all of the power management so that the user doesn’t have to be concerned with such things.

The Smart Battery Case manages power distribution in a way that helps to maximize battery life and won’t put undue strain on the battery inside of your iPhone 7. The Smart Battery Case doesn’t wait until your iPhone is about to die before it begins to charge your iPhone. Instead, the case is designed in a way that causes it to top off your iPhone’s battery when needed, and at times, power your iPhone even when it’s sitting at 100%. It’s far from the typical experience that you get from most third-party battery cases, which often rely on the user to manage power distribution. 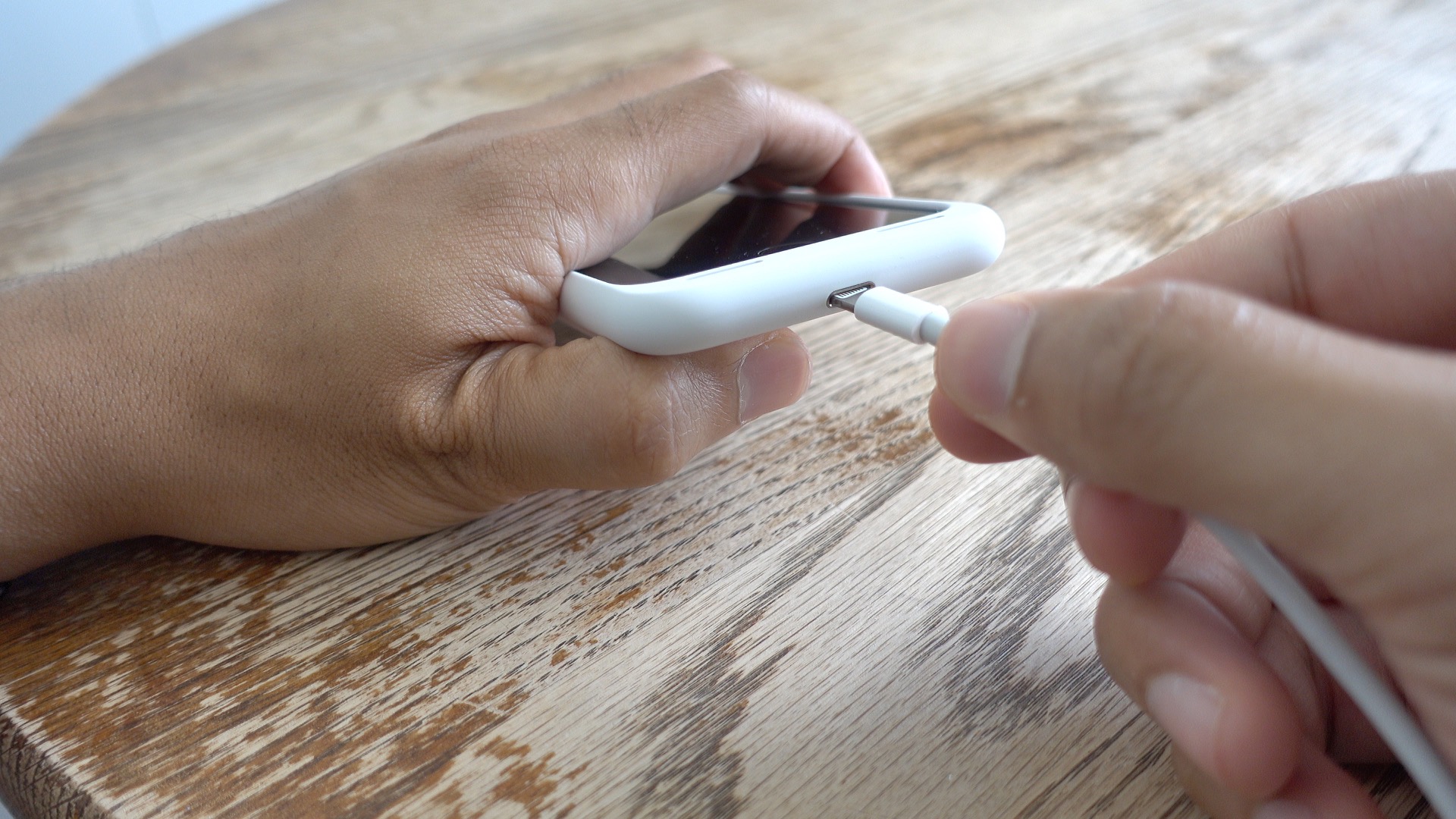 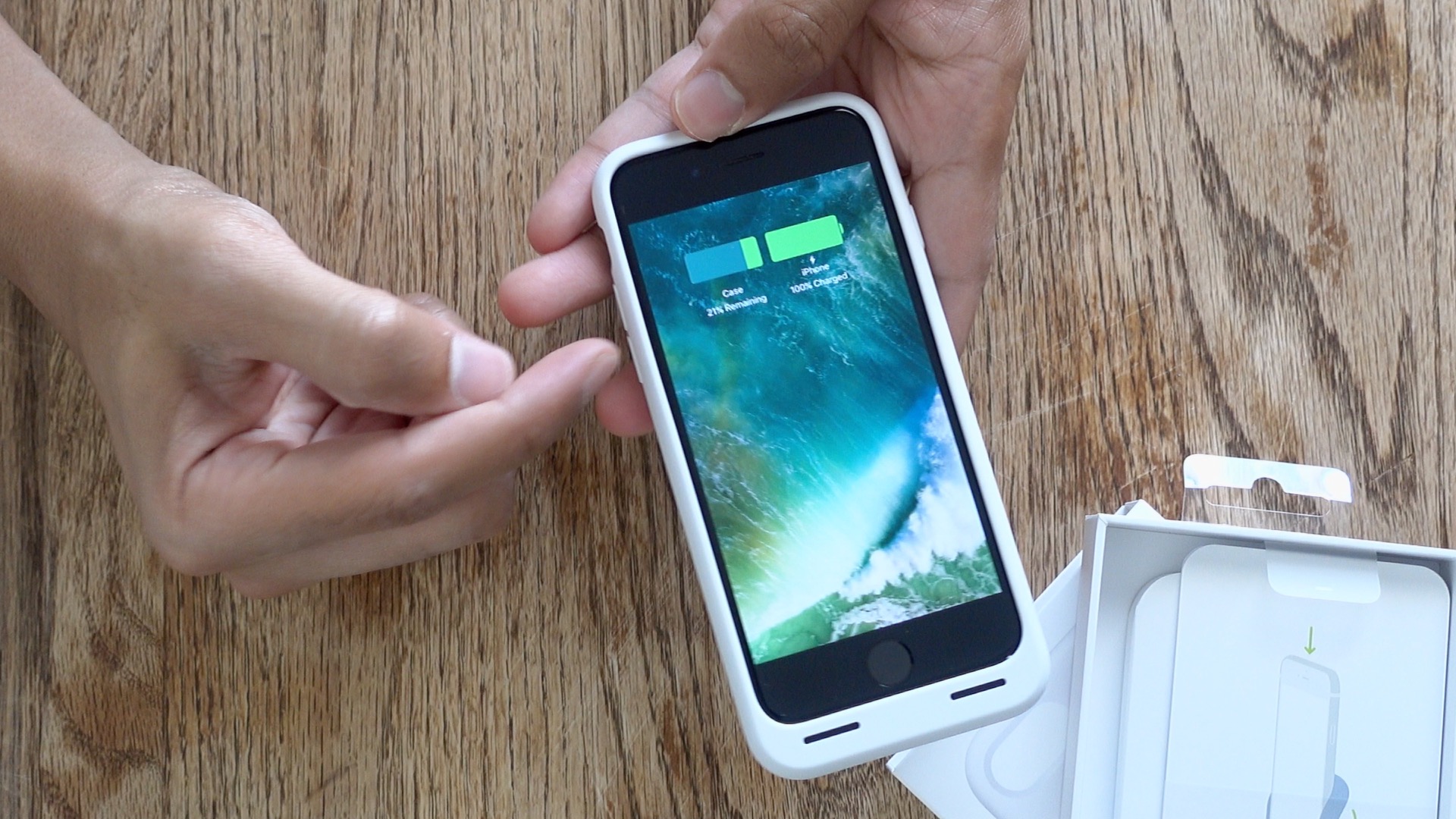 The big news is that the iPhone 7 version of the Smart Battery Case features a much larger battery. This results in longer battery life when compared to the iPhone 6s version.

As you can see, that’s a significant bump in battery capacity, and it translates into real performance gains when compared to the iPhone 6s model. Also, keep in mind that Apple says its increased the battery life of the iPhone 7 itself by as much as two hours.

Needless to say, when combined with the Smart Battery Case, should easily get you through a full day of heavy usage with some battery life to spare on the iPhone 7. When compared to last year’s model, which didn’t even have enough battery capacity to fully charge the iPhone 6s a single time, the new case is a marked improvement. 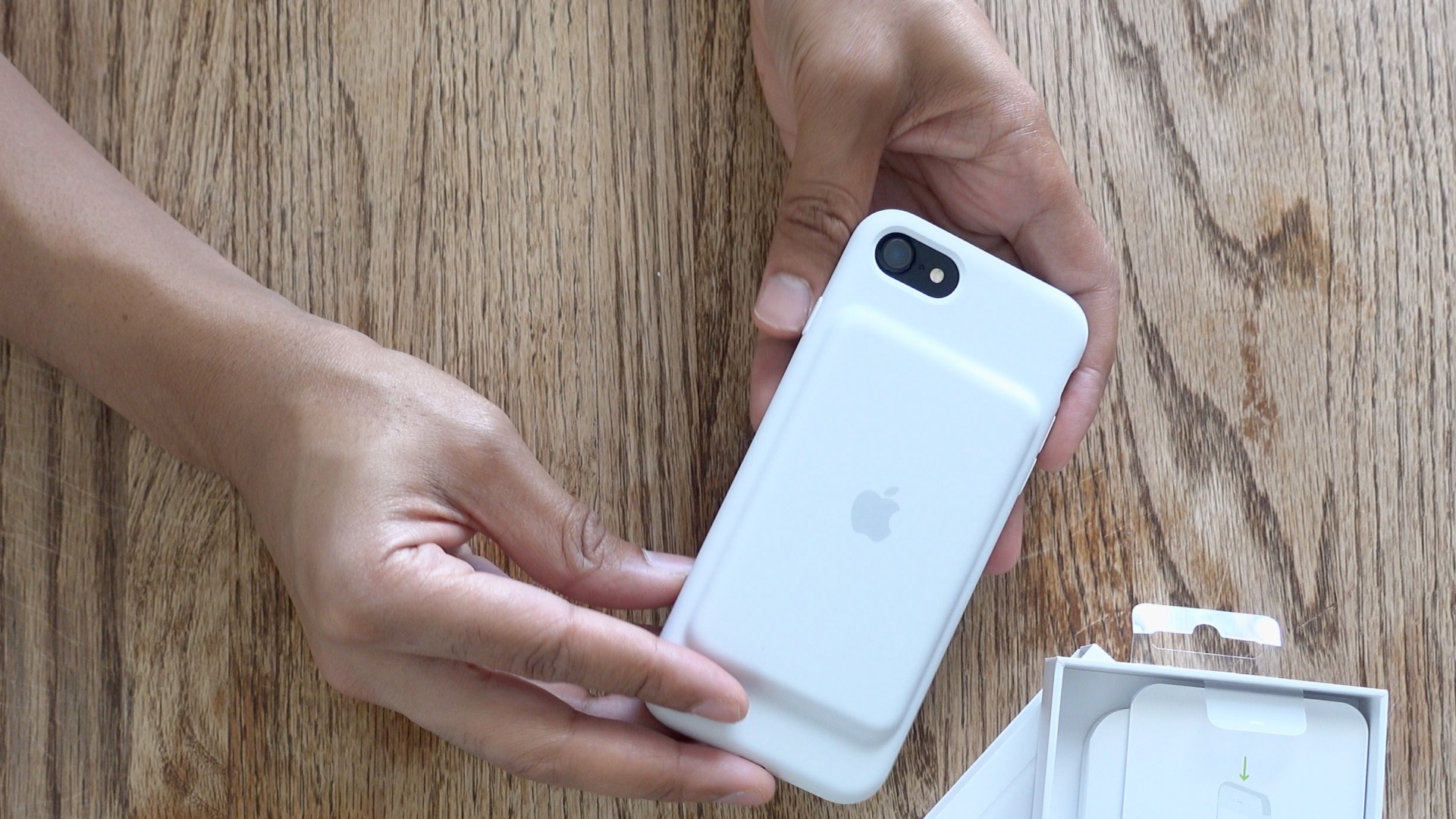 In fact, the iPhone 7, with a Smart Battery Case, features way more battery life than the larger iPhone 7 Plus, which could make the case an attractive option for those who don’t necessarily want a phone that big. Just keep in mind that you’re adding significant girth to the iPhone 7 by placing it in this case, so there are some definite tradeoffs to consider.

The actual dimensions of the case appear to be exactly the same as last year’s model, but it does seem to be slightly heavier when judging by hand. Apple doesn’t provide weight details, and my scale recently kicked the bucket, so I can’t speak authoritatively  on such matters. I’d say that the difference in weight, if real, is insignificant, and doesn’t make a big enough difference to matter.

The great thing about using a Smart Battery Case is that it can always be removed when you don’t need it. iPhone 7 Plus owners are permanently stuck with an extra-large phone, and that fact is worth considering as well.

Outside of the polarizing design, the price of the iPhone 7 Smart Battery Case is the biggest barrier to adoption. At $99, it’s certainly not cheap, and it’s not something that most people will consider purchasing on a whim. I’d feel a little better about buying this year’s model, given the significant increase in battery life, however.

The good news is that there are usually tons of battery cases available on Amazon, and most, if not all of them are significantly cheaper than Apple’s offering. For example, here’s a 4000mAh battery case for the iPhone 7 for just $49.99. In fact, there’s already a surprising amount of iPhone 7 battery cases for sale on Amazon.

With that said, you get what you pay for;  you don’t get the seamless “it just works” functionality that the iPhone 7 Smart Battery Case offers. The majority of these cases aren’t MFi-certified, and hence, almost none will come with a Lightning connector that affords the same simplicity offered by the Smart Battery Case.

It will charge, but the camera cutout is much too small to allow the camera to function properly. If you’re in a bind, you can always use the case to charge you iPhone 7, and remove it from the case when taking pictures. I’d definitely recommend buying the iPhone 7 version Smart Battery Case, though. 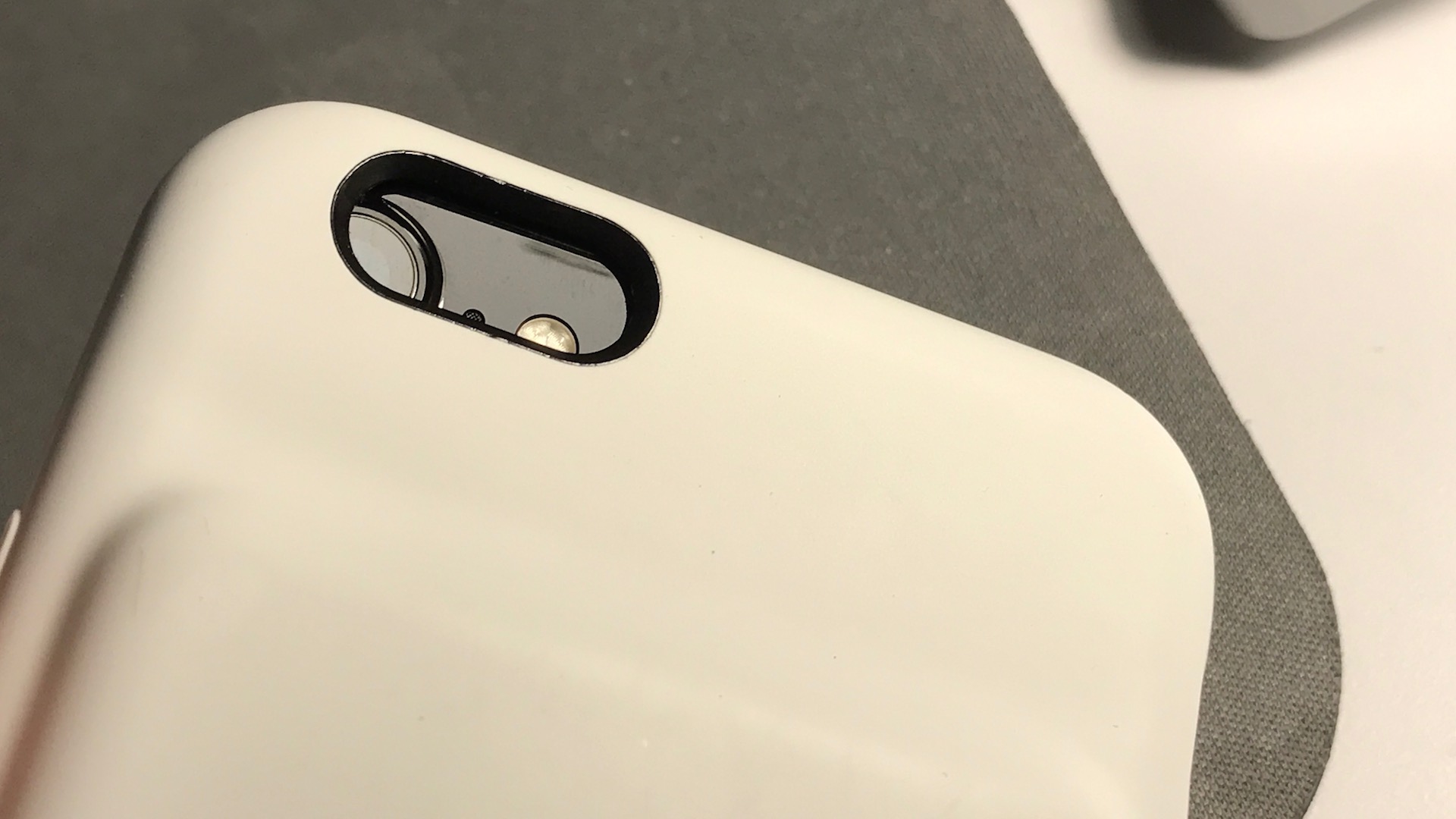 Yes, and no. You won’t get access to the 3.5mm headphone jack if you use the iPhone 7 Smart Battery Case with the iPhone 6s. Also, the camera opening, while larger, overlaps the top portion of the iPhone 6s camera bump. It’s not a very good look, but it doesn’t seem to interfere with photos, charging, or any other functionality outside of the headphone jack. 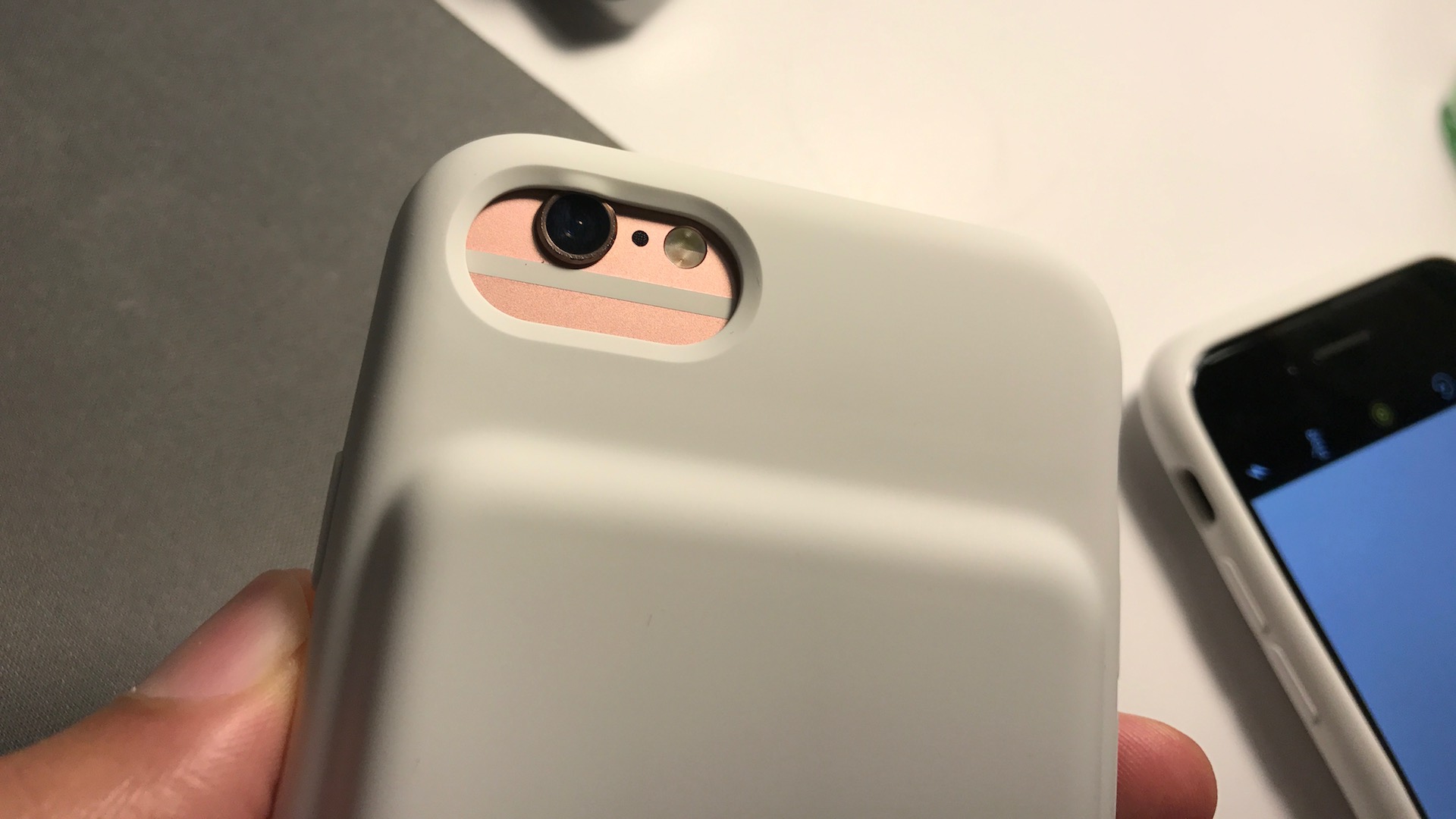 Almost everything else, though, lines up just right. The Lightning port is accessible, Volume buttons work, the Sleep/Wake buttons work, and the cutout for the Mute switch is in the right place as well. The iPhone 6s will charge fine when used inside the iPhone 7 Smart Battery Case. That said, I wouldn’t recommend it.

The iPhone 7 Smart Battery Case isn’t for everyone, but if you want the best battery case from a functionality standpoint, you’d be hard pressed to find a better solution right now. The Smart Battery Case just works. It features Lightning pass through, which makes it easy and effortless to keep both the case and the iPhone charged. Yes, it’s expensive, yes its looks are something that only a Cupertino designer could love, but it’s still one of the best battery case options for the iPhone.

For more information on the iPhone 7, be sure to read our Top iPhone 7 features post, and watch the accompanying video below: