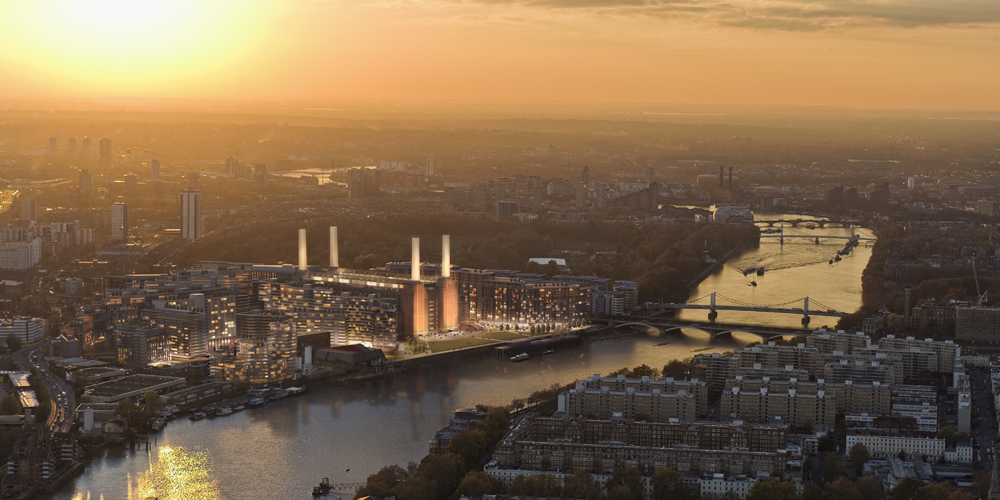 London’s Evening Standard reports that Apple is to create a spectacular new UK campus in the iconic Battersea Power Station building alongside the Thames.

The iPhone and iPad maker will move 1,400 staff from eight sites around the capital into what it calls “a new Apple campus” at the Grade II listed former electricity generator.

Its employees will occupy all six floors of office space in the brick “cathedral of power”, which is being painstakingly restored after 33 years standing derelict on the banks of the Thames …

The former coal-fired power station is one of the most recognizable buildings on the London skyline. Built in two stages in the 1930s and 1950s, it ceased operation in 1983 and has since been the subject of many different plans, proposals and rumors.

Although the power-generating equipment was removed many years ago, the famous facade is a protected building and must be left intact, with any new building work taking place inside the brick walls, with lower buildings permitted externally so as not to spoil the view. Concern has been expressed that the building was being left to rot as successive development plans came to nothing.

The fact that the richest company in the world has confirmed that it will be taking ownership should provide reassurance that the building will now remain safe.

Apple told the Standard that construction work is expected to take five years.

Apple said it was looking forward to the 2021 opening of “our new London campus” as staff relocate to “this magnificent new development at one of the city’s best-known landmarks”. It added: “This is a great opportunity to have our entire team working and collaborating in one location while supporting the renovation of a neighbourhood rich with history.”

Apple’s main European headquarters – the subject of a huge tax-avoidance controversy – will remain in Ireland.

Apple won’t have exclusive use of the building, with homes, offices, shops and leisure facilities sharing the space – but the company will be the largest tenant, leasing half a million square feet. This makes it one of the largest single office deals signed in central London in the past 20 years. The total floor space will provide Apple with breathing space, with room to expand to a total of 3,000 staff if required.

A new Northern Line tube station is under construction, expected to be completed a year before Apple moves in, providing easy access to the campus. The new station was a planning requirement, with the developers shouldering much of the cost. The British government’s chancellor, Philip Hammond, described the deal as a vote of confidence for the UK at a time when Brexit is creating a great deal of uncertainty.

Apple’s decision further strengthens London’s position as a global technology hub and demonstrates how the UK is at the forefront of the next steps in the tech revolution. It’s another vote of confidence in the UK economy.