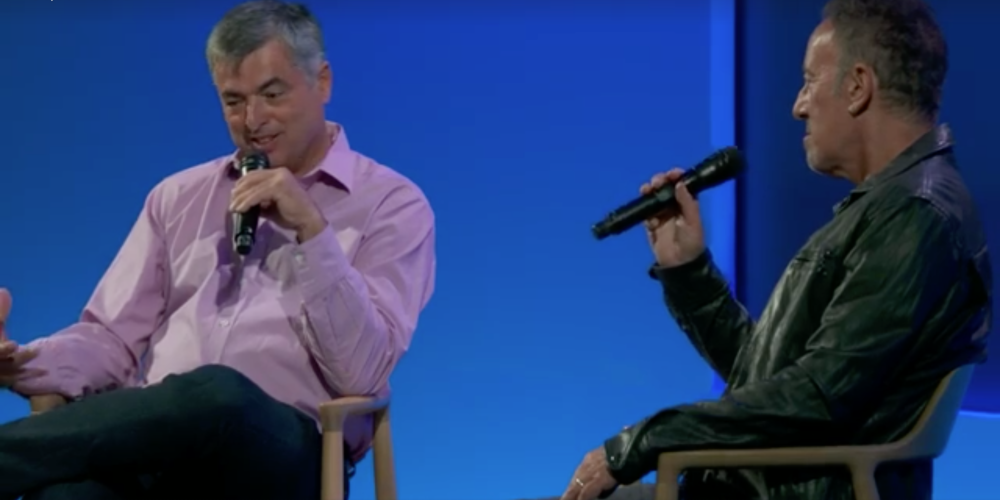 Bruce Springsteen today sat down with Apple executive Eddy Cue for an interview at the SoHo Apple Store in New York City. The interview focused mainly on Springsteen’s new memoir “Born to Run,” which was released earlier this week.

Apple Stores, especially in flagship locations like SoHo, have long held events but it’s interesting to see Eddy Cue moderate an interview. Cue himself is a big music fan, so that likely influenced the choice. Additionally, Apple Music head honcho Jimmy Iovine was also in attendance.

Iovine came up a few times during the interview, with Springsteen joking that Iovine, who helped produce much of Springsteen’s work, “stayed awake most of the time” during the recording process. “Jimmy did well,” Springsteen said.

Other topics covered during the interview include a discussion of Springsteen’s family life, the early days of making albums like Born to Run, what music he listens to now (notorious Apple basher Kanye West makes the cut), and cars. No, not the Apple Car, but Springsteen’s love for including cars in his lyrics.

Interestingly, the SoHo appearance was live streamed on Facebook, not Apple Music or Beats 1. Although the interview focused primarily on Springsteen’s new book, such a high-profile interview seems like something Apple would have wanted on Beats 1.

Nevertheless, the full video of the interview can be seen below. Springsteen’s new book is available now.

Bruce Springsteen at the Apple Store in SoHo!