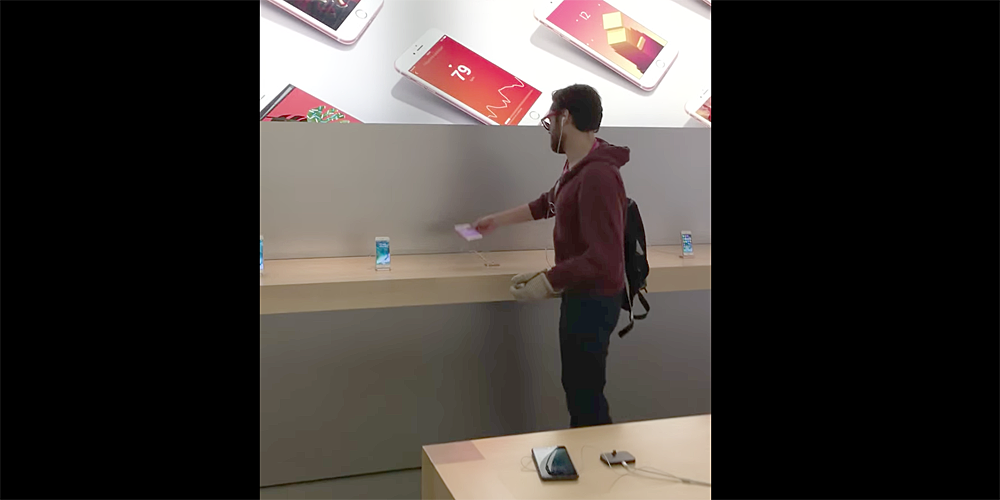 Update: The man was convicted and sentenced to six months imprisonment, suspended for two years. Apple said that the retail value of the kit he destroyed totalled €60,000 ($65,000), and it appears the court ordered him to repay Apple’s replacement costs of €17,548 ($19,000). That was one expensive temper tantrum …

French media has posted multiple videos of a man in an Apple Store in Dijon, France, smashing tens of thousands of dollars worth of iPhones and Macs. He removed display products from their stands, placed them flat on the tables and then smashed them with a heavy steel ball used for the popular French game of Boules.

Most of the products he smashed were iPhones, but he also smashed at least one MacBook and multiple iMacs, according to iPhonote. The videos were tweeted by @quentin_IOS.

The man can be heard shouting about his consumer rights. Some reports say that he claims Apple refused to honor the EU requirement to provide warranty cover for two years after purchase.

A siren can be heard during the rampage, which is the sound that alerts employees to a tripped security alarm being triggered on products. There are no reports of anyone being hurt, and it appears that staff evacuated customers from the store.

The man is accosted by mall security staff, who detain him until police arrive. At one point, the man breaks free and makes a run for it, but is quickly apprehended.

The very loud sound of the steel ball smashing into the iDevices is quite painful to hear!

This video shows him being detained, while store staff line the entrance to prevent the man re-entering the store.

While in this one we see him breaking free and then being caught again.

We’re guessing he’ll be appearing in court soon. If Apple also takes out a civil action for recovery of the damages, he’ll have had an extremely expensive day …