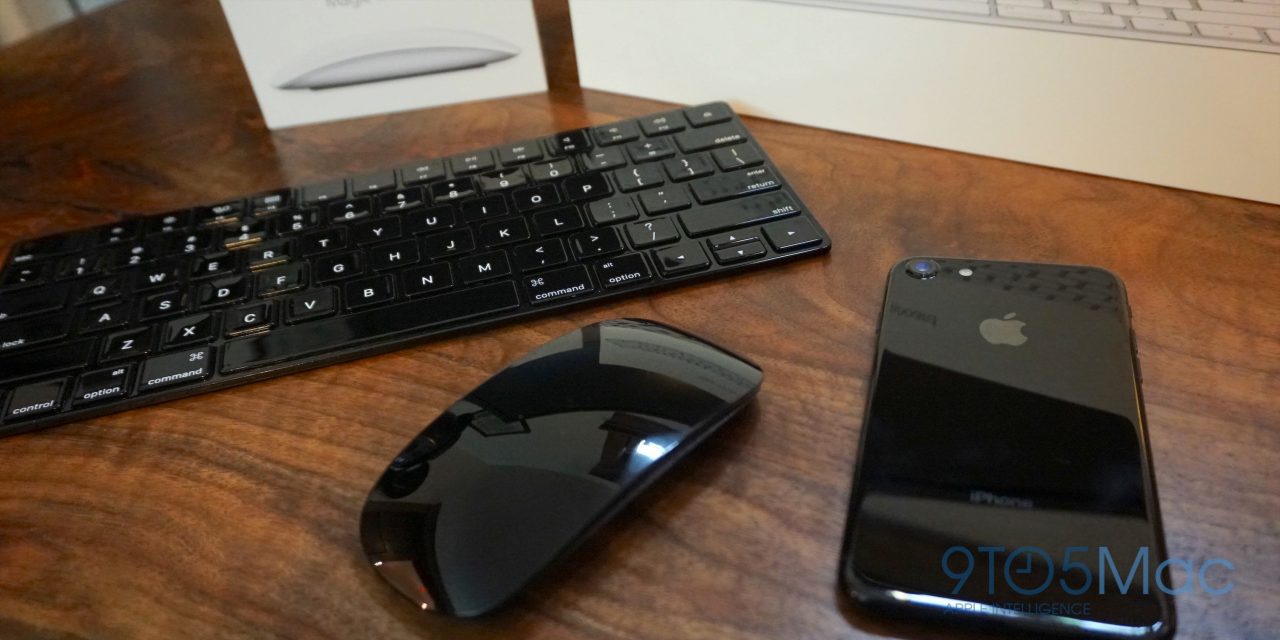 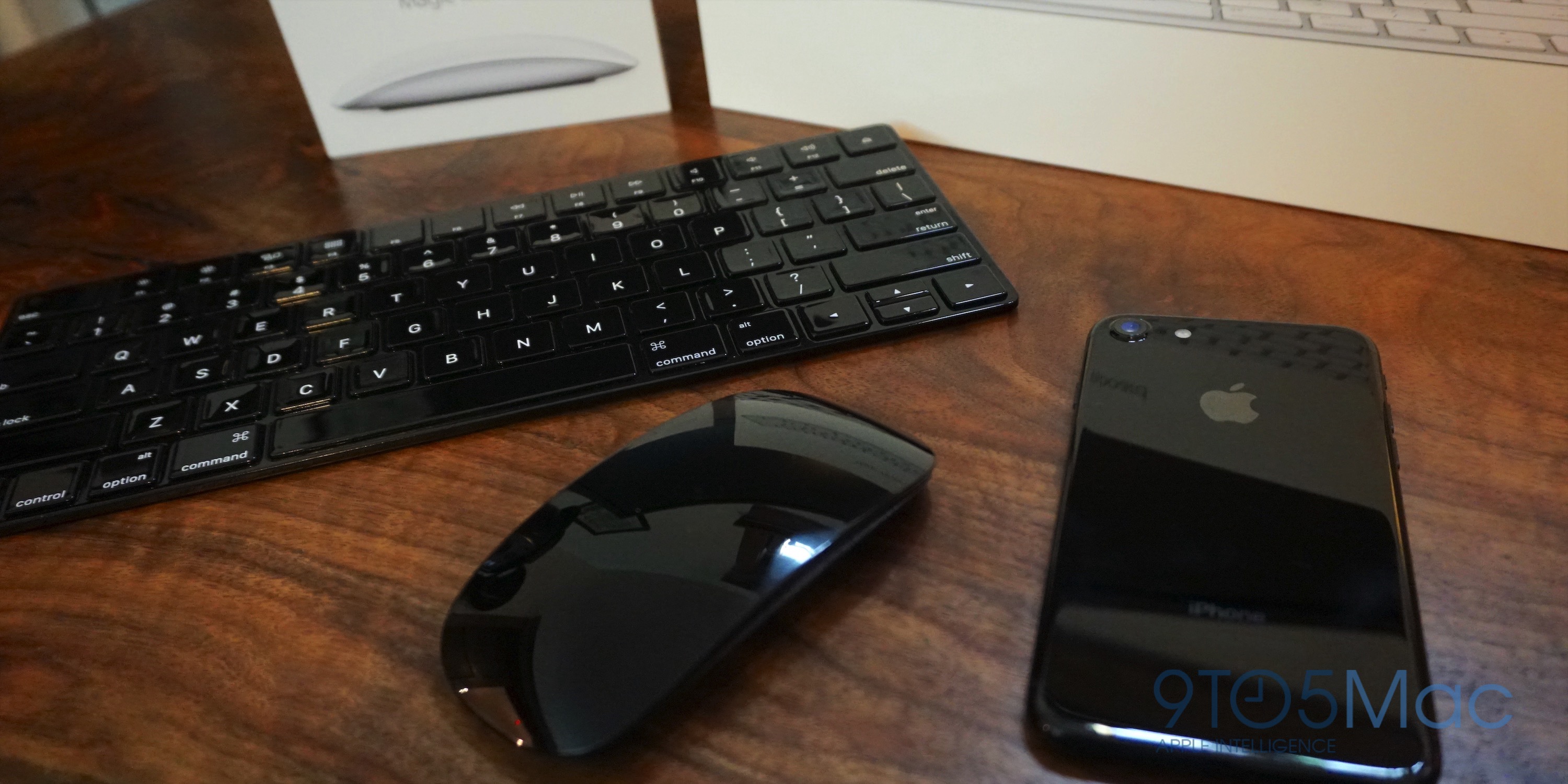 The jet black iPhone 7 might be a little more prone to scratches and fingerprints with its glossy finish, but that didn’t stop me from choosing the color for my iPhone this year. And I’m glad I did— it’s even more stunning in person than how it appears in photographs.

With a little help from the folks over at Colorware, I decided to give Apple’s Magic Mouse 2 and Magic Keyboard the full jet black treatment. The company’s website let me configure the paint job, and I chose solid jet black with a glossy finish for both the mouse and keyboard. Alternatively, you can pick a matte finish and a number of other color options.

Colorware has been around for a while, but I never had the pleasure of feeling the quality of its paint process for myself. The good news is that unlike many other third-party treatments for Apple’s keyboard that I’ve tested, Colorware’s process didn’t leave the keys of the Magic keyboard or the distinctive glossy shell of the Magic Mouse feeling much different than how they come stock from Apple. That’s important, because other shortcut keyboards I’ve tested, for example, apply color in a way that can drastically change the way the keyboard feels for the worse. 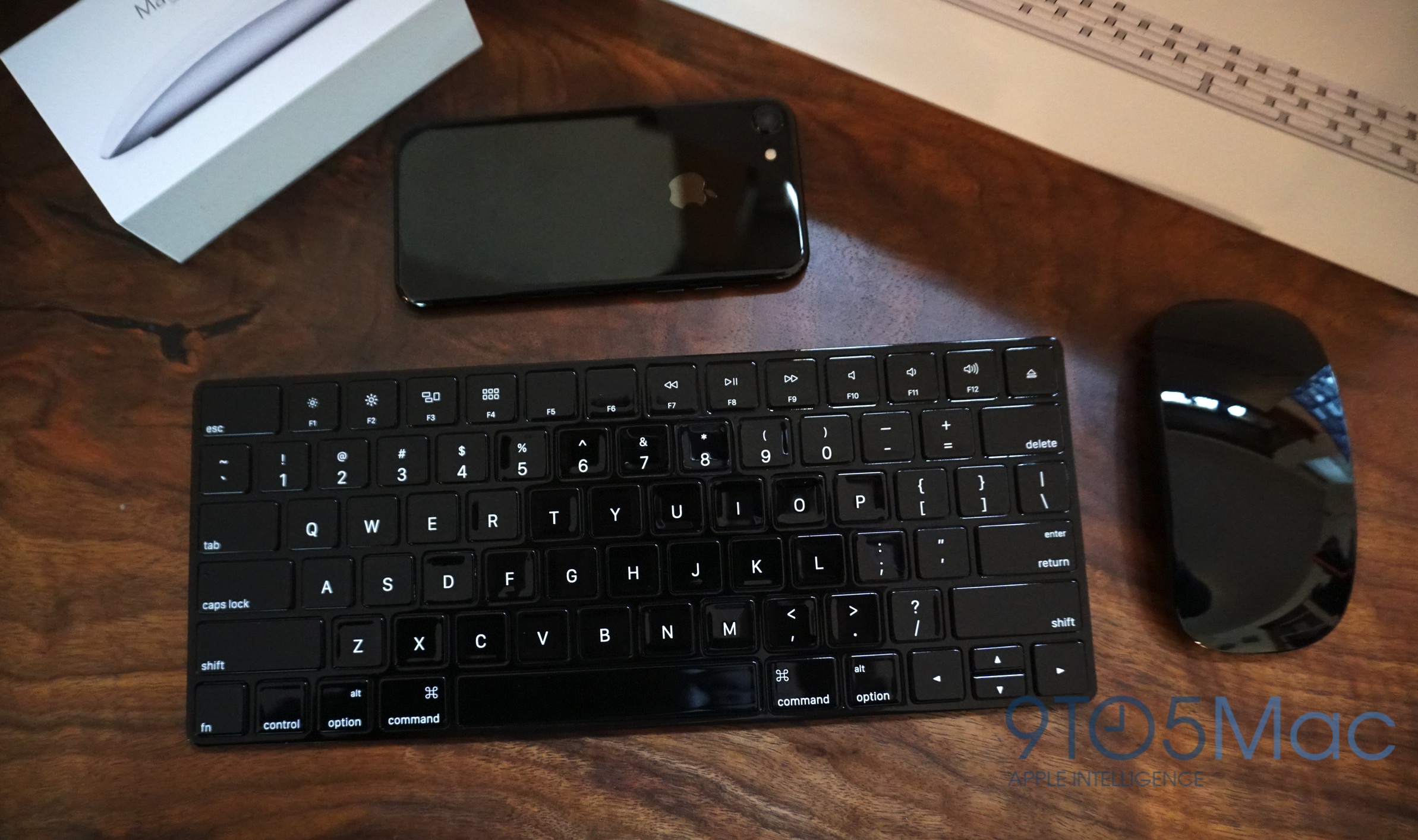 The glossy finish on the Jet Black Magic Keyboard as you might expect feels a bit different than the matte finish that Apple puts on its keys, but it doesn’t noticeably change the typing experience much. The bottom of the keyboard remains white, but Colorware paints all the sides so you only see your color of choice when it’s lying flat. The company has matte color options too, and I might have opted for a black matte keyboard for both the feel and to avoid fingerprints if I wasn’t specifically going for the jet black look to match my new iPhone 7.

The jet black Magic Mouse, on the other hand, looks and feels almost exactly the same as Apple’s stock mouse which already has a glossy (but white) finish. I didn’t notice any difference in performance, either, with the top of the mouse feeling identical to a stock Apple Mouse for all the usual gestures, clicking and scrolling. The paint job removes the Apple logo normally on top of the mouse, and you can optionally select two tone finishes with a different color on the bottom than the top.

I opted for an entirely jet black setup (the bottom of the mouse is pictured below). 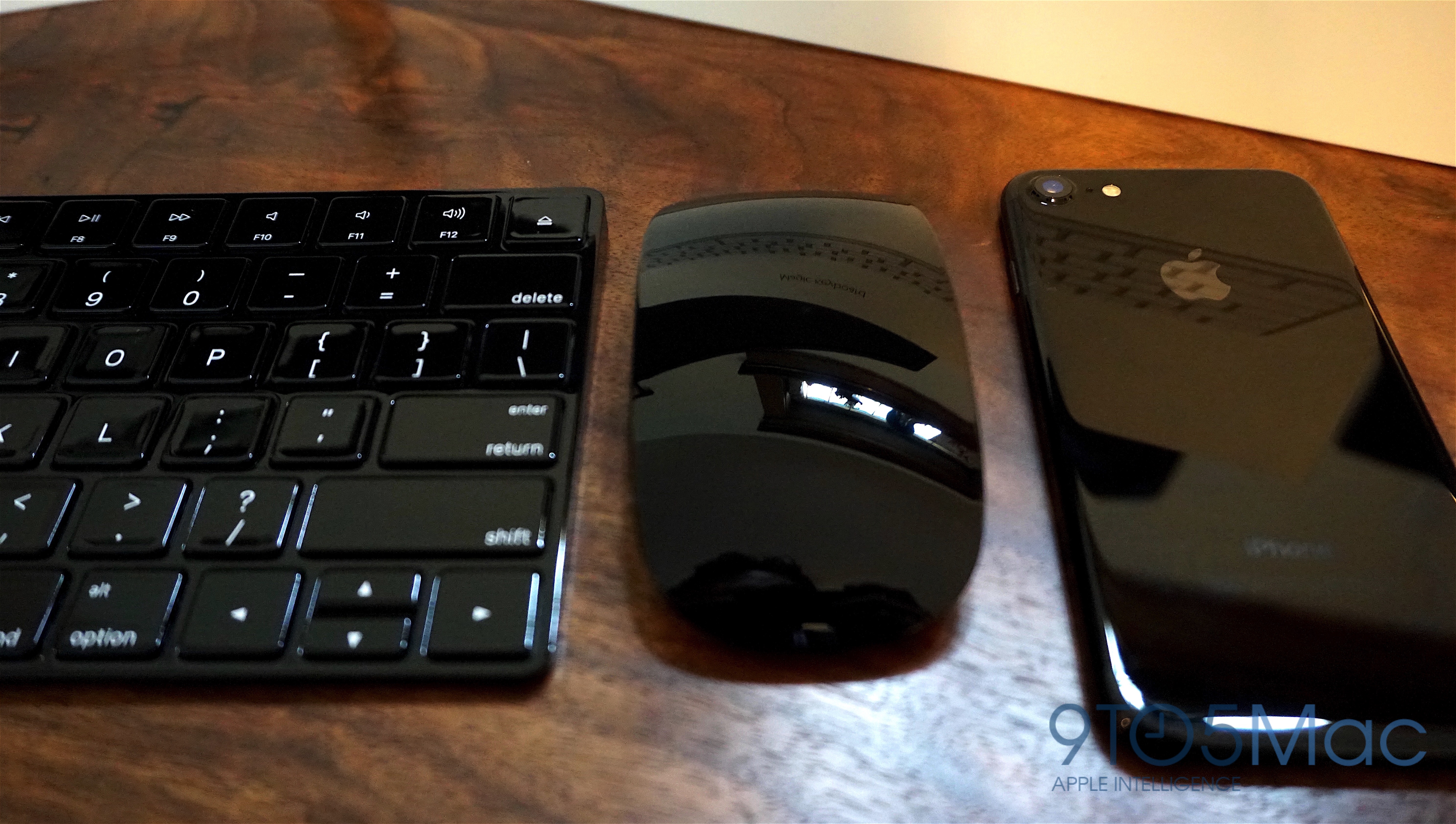 The result is a glossy jet black paint job that doesn’t much take away from the design and feel of Apple’s accessories and looks almost identical to the iPhone 7, so what’s there to lose? You can’t send in your own Apple mouse and keyboard like Colorware does for other products, but you can configure a new set from their site for $199 and $119. That’s a $40 premium on the mouse over Apple’s usual $79 price tag and $99 on the keyboard. 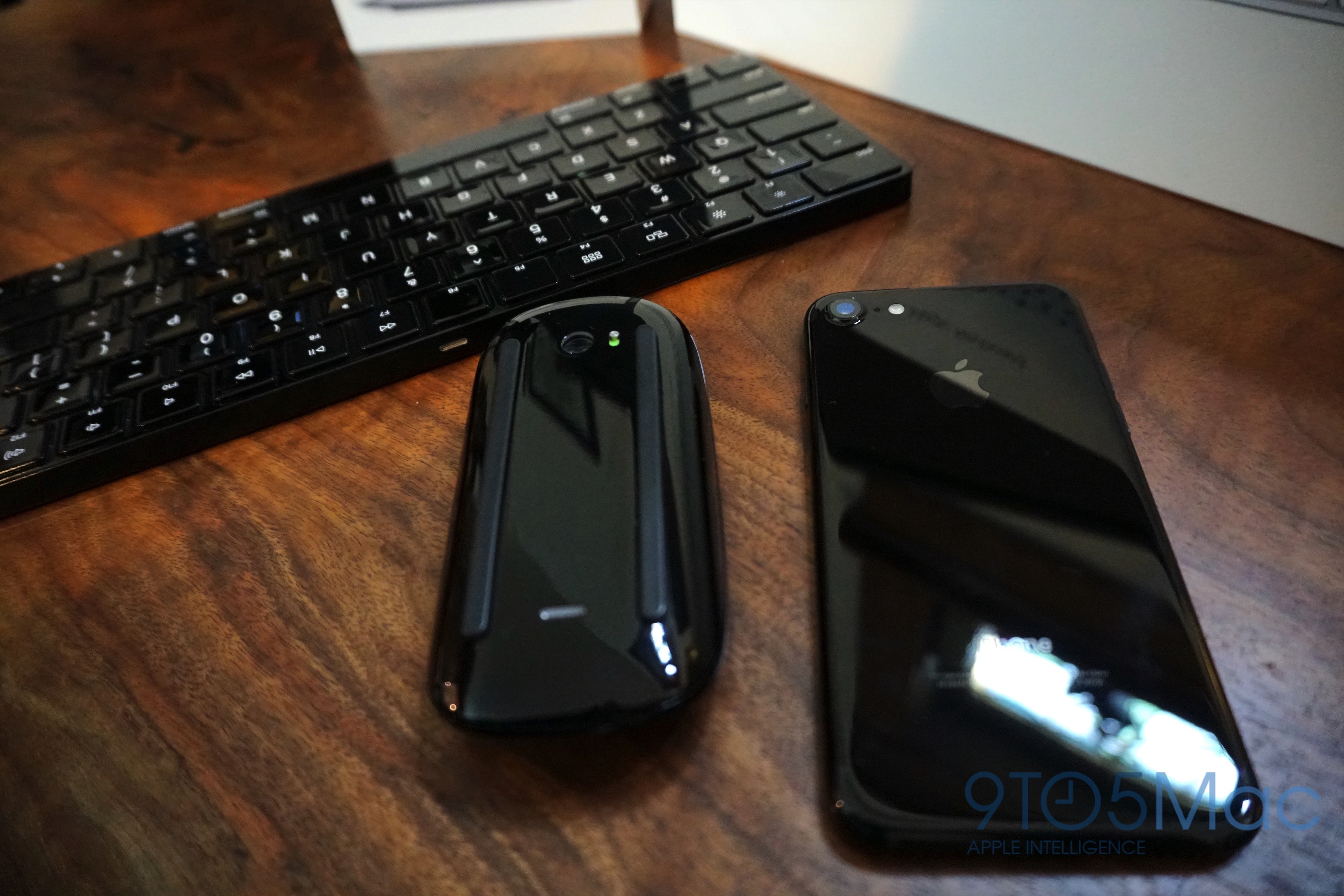 It’s something I wish Apple itself would do for its products. Why are the new AirPods only available in white for example? I’m not the only one that’s noticed, however, as just last month someone rendered the AirPods in black, which in hindsight seems like a no-brainer alongside the new jet black iPhone 7. And it’s even something that myself and a lot of other people have mentioned when it comes to Mac accessories too… 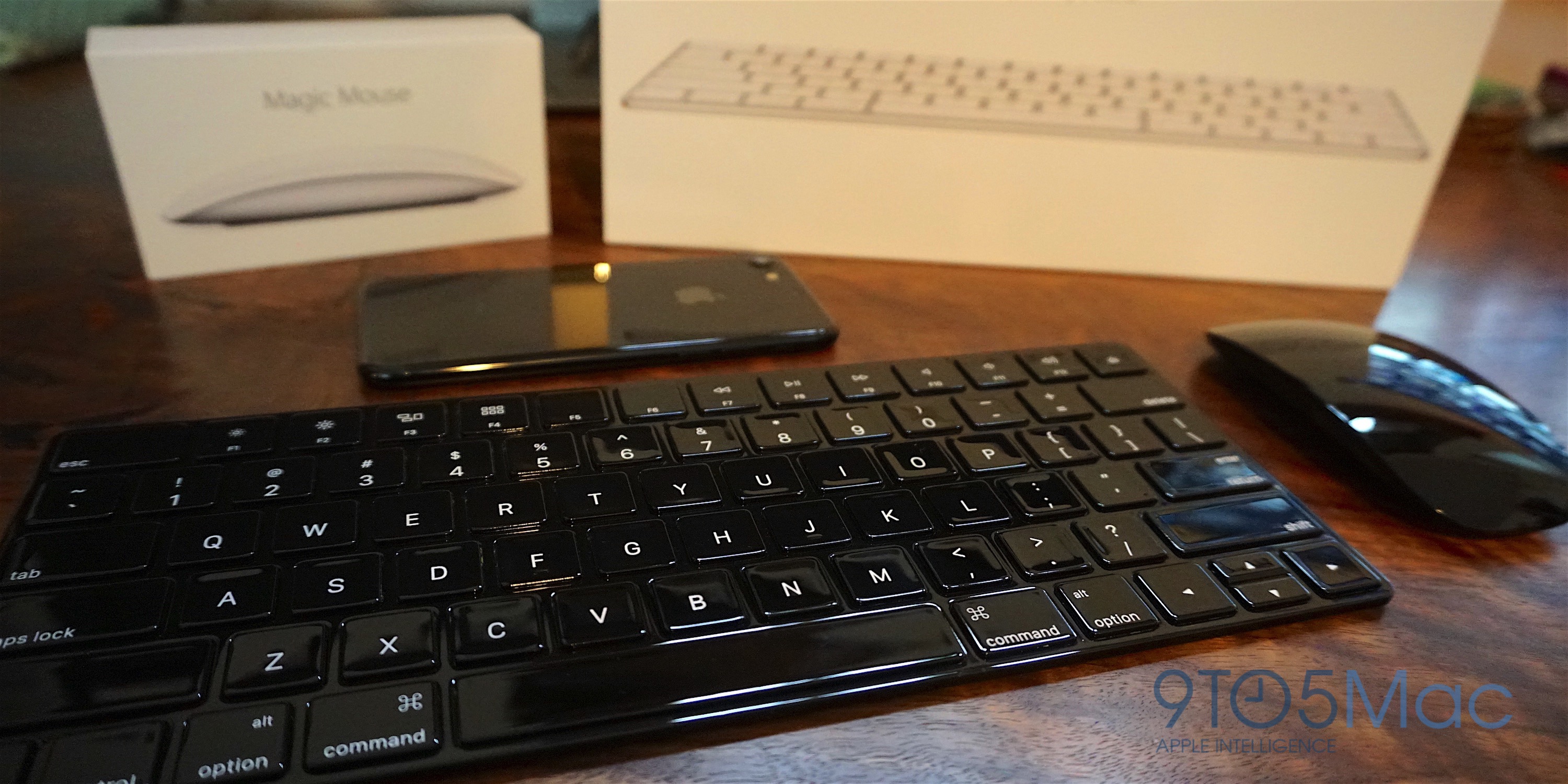 A black Apple mouse and keyboard was something I hoped for when I bought the “new” black Mac Pro back in 2013, but so far Apple has mostly stuck with the aluminum and white color scheme for its accessories despite bringing new color options to MacBooks and other products.

Fortunately, Colorware remains a solid option until then…

The Magic Mouse and keyboard come with all the original Apple packaging and cables, and you can customize both with ton of different color options and finishes if jet black isn’t your thing. $119 for the Magic Mouse, and $199 for the Magic Keyboard. 9to5toys has 10% off with coupon code ‘9to5Toys’ for a limited time.