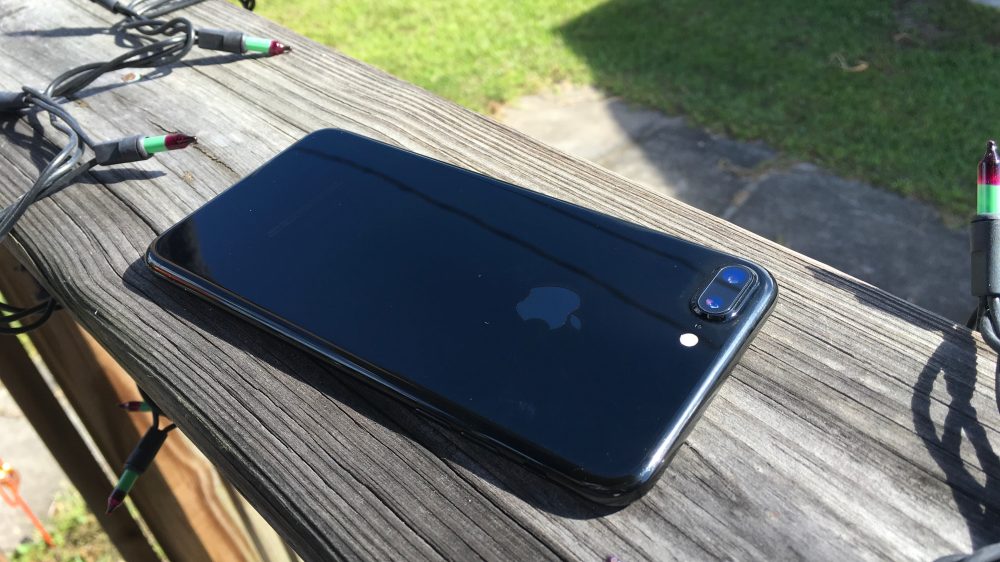 Shipment rose from 345.2 million units in Q3 2015 to 375.4 million in Q3 2016, which is the industry’s fastest growth rate for a year. Strategy Analytics attributes much of this growth to new product launches from Apple.

Individually for Apple, though, the numbers weren’t as bright. The company saw its shipments fall from 48 million to 45.5 million, just as it reported during its earnings call. This fall pushed Apple’s marketshare from 13.6 percent to 12.1 percent, though Apple is holding strong to its #2 spot.

Samsung, despite its struggles with the exploding Note 7, held onto its title as the top smartphone vendor, selling 75.3 million units. That number is down 10 percent year over year, though, from 83.8 million in Q3 2016. In terms of marketshare, Samsung saw its share fall from 24 percent to 20 percent. These numbers mark Samsung’s worst quarter in 2 years. Strategy Analytics’ executive director Neil Mawston attributes these struggles to Samsung’s Note 7 debacle, which badly “dented” the company’s brand.

Up-and-coming Android manufacturers again stole some of the limelight during Q3 2016. Huawei saw its marketshare increase from 8 percent to 9 percent as its growth rate was halved to 26 percent annually during Q3. OPPO, on the other hand, shipped a record 21.6 million smartphones during Q3 2016, 140 percent year over year. This gives the company 6 percent of the smartphone markets. Vivo also saw strong growth, capturing 5 percent of the market, up from 3 percent last year.

Apple itself reported iPhone sales of 45.5 million iPhones during its most recent quarter, noting during its conference call with investors that “demand outstrips supply” of its new iPhone 7 and iPhone 7 Plus, especially with the latter.

The full Strategy Analytics report can be read below: 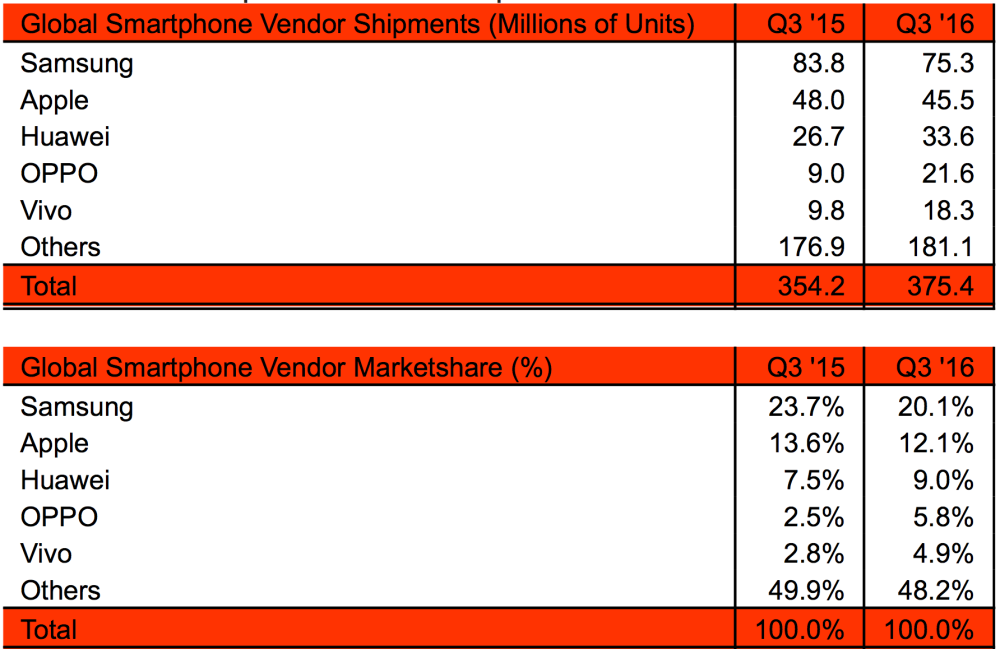 Linda Sui, Director at Strategy Analytics, said, “Global smartphone shipments grew an improved 6 percent annually from 354.2 million units in Q3 2015 to 375.4 million in Q3 2016. This was the smartphone industry’s fastest growth rate for a year. As expected, the global smartphone market reached a bottom in the first half of 2016, and the growth outlook for the second half of this year is improving due to several big new product launches from Apple, Huawei and others.”

Neil Mawston, Executive Director at Strategy Analytics, added, “Samsung shipped 75.3 million smartphones worldwide in Q3 2016, falling 10 percent annually from 83.8 million units in Q3 2015. This was Samsung’s slowest growth rate for almost two years. Its global smartphone marketshare has dipped from 24 percent to 20 percent in the past year. Samsung’s recent Galaxy Note 7 recall was handled badly, which dented its brand image and left a large product gap in its premium smartphone lineup. Samsung will now be looking to its next flagship launch, such as the rumored Galaxy S8 model, to recover momentum in 2017. Apple fell 5 percent annually and shipped a lackluster 45.5 million smartphones worldwide in Q3 2016. Apple’s global smartphone marketshare has softened from 14 percent to 12 percent in the past year. Apple has been given a slight boost by Samsung’s Note 7 missteps, but it continues to face iPhone fatigue among many consumers in major regions such as China and Europe.”

Woody Oh, Director at Strategy Analytics, added, “Huawei maintained third position with 9 percent global smartphone marketshare in Q3 2016, up from 8 percent a year ago. Huawei’s smartphone growth rate has more than halved, to 26 percent annually in Q3 2016, compared with 62 percent annual growth in Q3 2015. Huawei is facing intense competition from OPPO, Vivo and other emerging Chinese rivals such as fast-growing LeEco.”

Linda Sui, Director at Strategy Analytics, added, “OPPO shipped a record 21.6 million smartphones and maintained fourth position with 6 percent global marketshare in Q3 2016. OPPO grew 140 percent annually in the quarter, outperforming all its major rivals. OPPO is very popular in China and is internationalizing rapidly across India, Asia and other emerging markets. OPPO is a rising star. Vivo surged to fifth place for the first time ever, capturing a record 5 percent global smartphone marketshare in Q3 2016, leaping from 3 percent a year ago. Vivo’s range of Android models, such as the V3 and X7, are proving wildly popular in China, taking share from rivals such as Samsung, Apple and Huawei.”