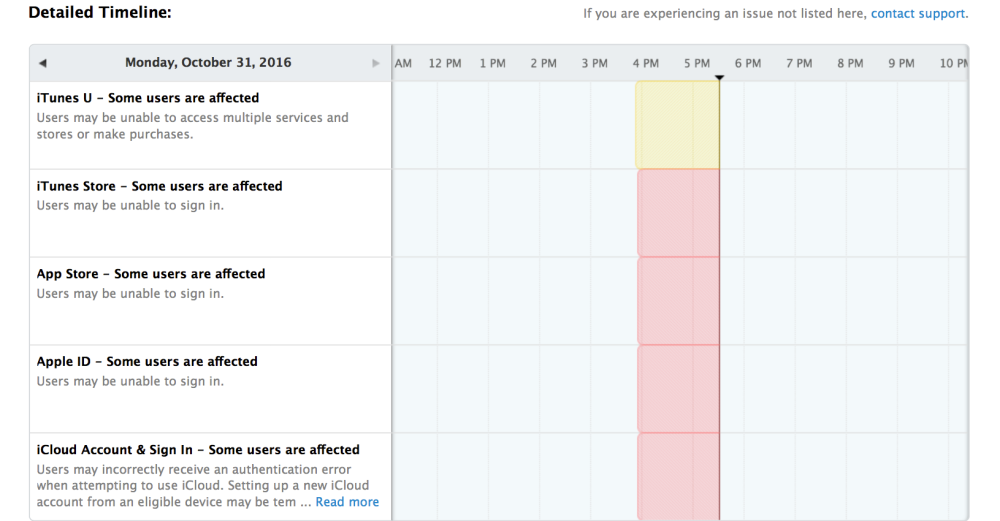 Apple has just recently updated its System Status webpage to reflect on ongoing issues with its cloud services. According to the webpage, users are unable to sign in to a variety of services, including iCloud, the App Store, the iTunes Store, and iTunes U.

Apple’s System Status webpage says the issues began just before 4PM ET and have yet to be resolved. It’s unclear how widespread the connectivity issues are, though Apple’s timeline depicts the outage in red for the iTunes Store, App Store, and iCloud. Though, the iTunes U outage is in yellow.

The problems stem from signing into Apple’s cloud services. Users are still able to access the iTunes Store and App Store, but if at any point they’re asked to sign in, they won’t be able to.

Apple also notes that the set up of a new iCloud account is also affected by this outage, as is signing into a service with your Apple ID (such as setting up a new device).

Users may incorrectly receive an authentication error when attempting to use iCloud. Setting up a new iCloud account from an eligible device may be temporarily unavailable.

Are you having issues with the iTunes Store, App Store, iCloud, or iTunes U? Let us know in the comments.