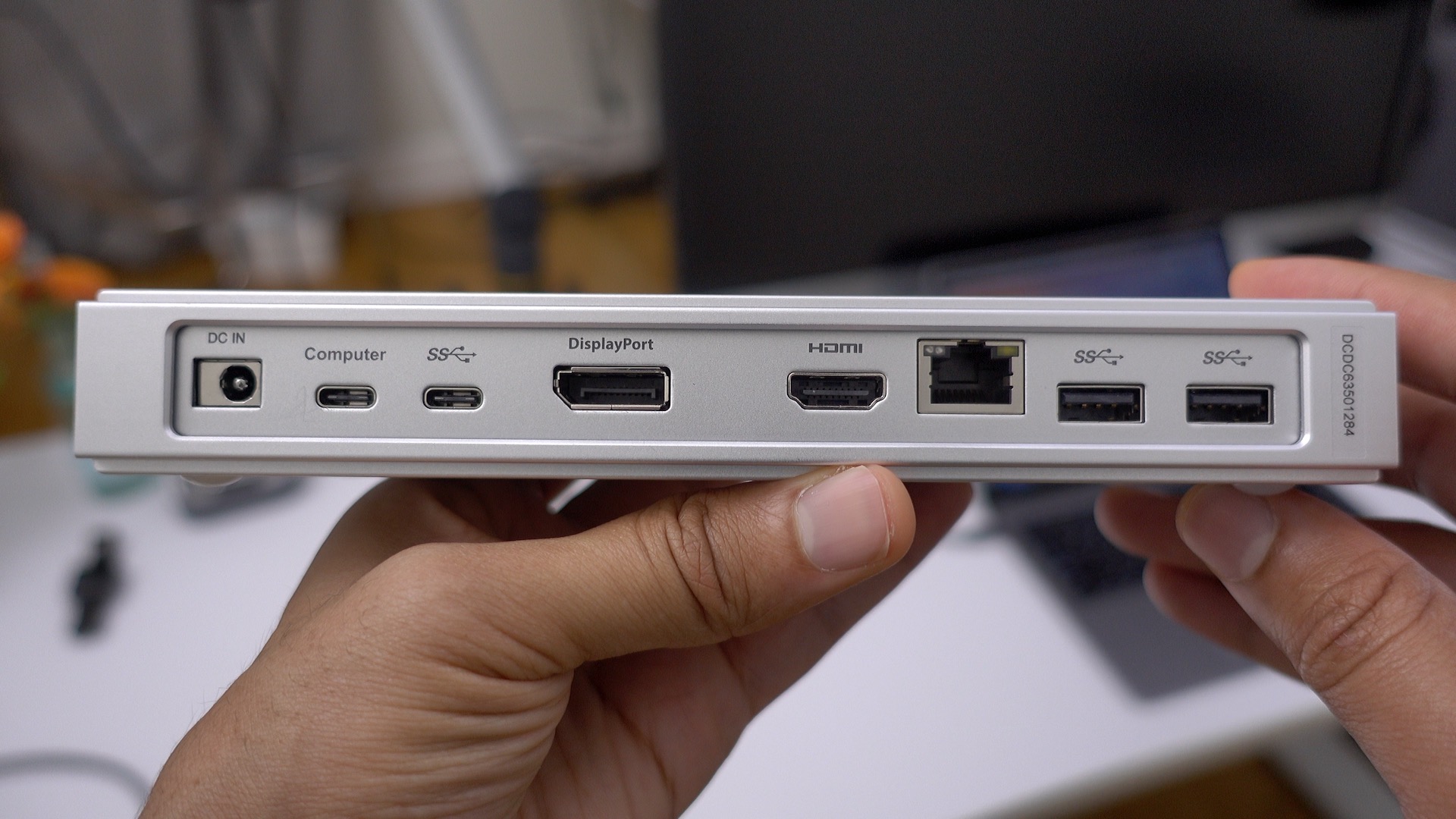 The Late 2016 MacBook Pro lacks many of the convenient ports that we’ve seen on previous MacBook releases. But if there’s a silver lining to be found, it’s that the USB-C ports featured on the new machines are super-versatile.

With a single USB-C cable, for instance, you can tap into CalDigit’s USB-C Dock, which gains you instant access to multiple legacy USB-A ports, Gigabit Ethernet, HDMI 2.0, DisplayPort 1.2, an extra USB-C port, and an additional 3.5mm headphone jack along with a microphone jack.

In addition, the unit is able to charge a MacBook up to 60W. That means that the dock should do fine charging the smaller 13″ MacBook Pro at full speed, but will take a bit longer charging the 15″ MacBook Pro that ships with a larger power adapter.

CalDigit’s USB-C Dock isn’t a perfect device, but it does a pretty good job of turning the new MacBook Pro into a desktop-worthy machine, if you can put up with the compromises you’ll have to make in order to use it. Have a look at our hands-on video walkthrough for the details.

CalDigit’s USB-C Dock is fully comprised of aluminum, with an interesting texture ridge surface on the top and bottom. The dock is designed much in the same way as CalDigit’s Tuff line of USB-C portable drives. It’s nice that the unit is all aluminum and not plastic, but there is a certain hollowness to the dock that makes it seem a little more fragile than its build quality might initially suggest. For example, when you sit the dock down on a desk, you’ll hear a slight rattle from the parts within.

The good thing about the aluminum design is that the casing works like a giant heat sink to help dissipate heat. That means that there’s no need for noisy fans. 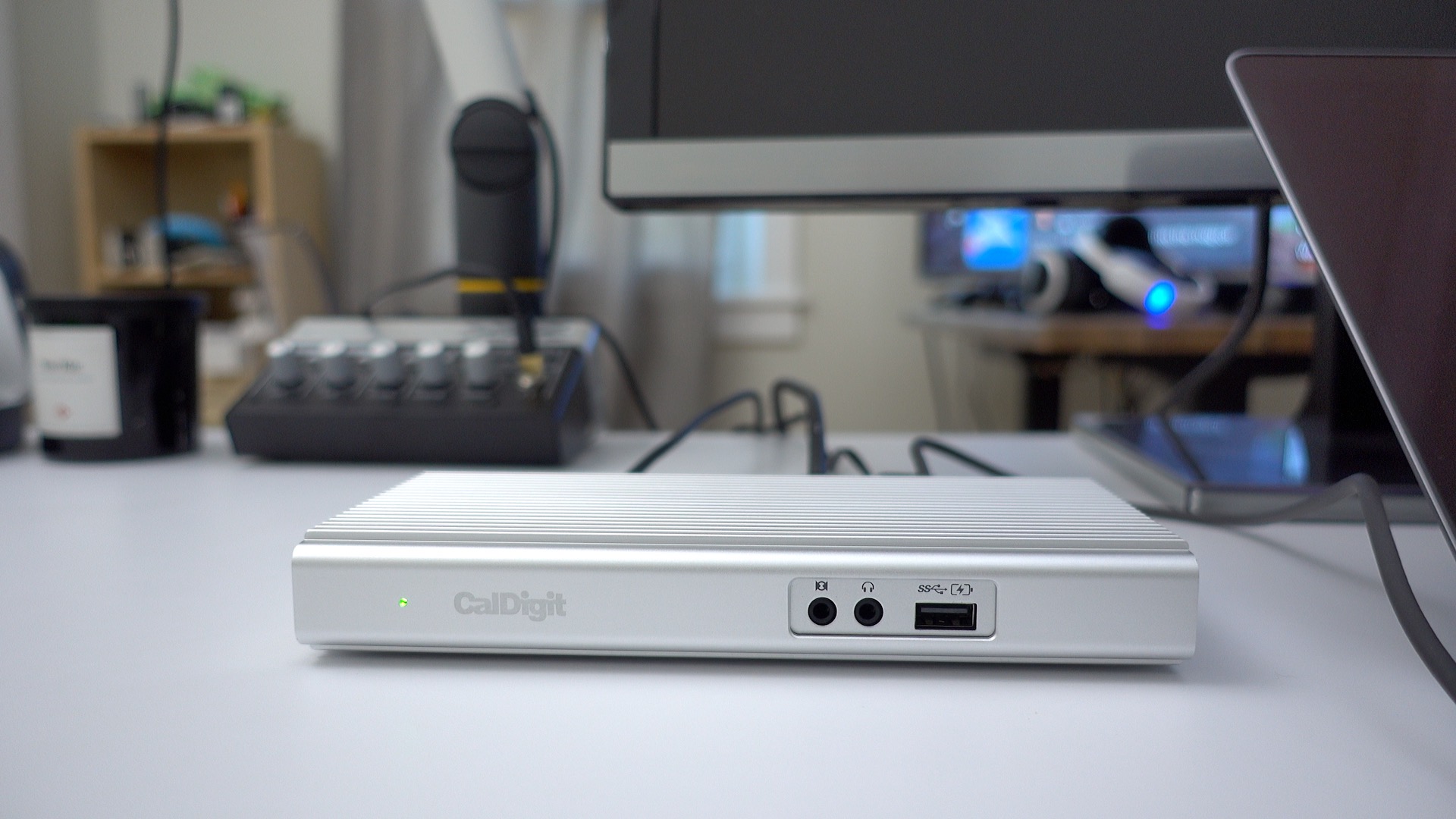 You’ll notice a small LED indicator light on the left side of the dock next to the CalDigit logo. When this light is green, it means that there’s a successful connection to your computer, with the dock providing full power. If the LED indicator is red it means that maximum power isn’t being supplied to the computer.

Here is how CalDigit explains it on its FAQ:

When laptop charging is down to 15W, the front LED indicator light will turn red. If your computer requires more than 15W to operate, it may not be enough power to sustain the battery and we recommend plugging in your OEM charging cable. This might happen when connecting to a Thunderbolt 3 laptop workstation such as MSI WT72 or any other high-power mobile computer. All functionality including video and USB data are still supported.

I’ve been testing CalDigit’s dock with my 2016 MacBook Pro (without TouchBar). This machine features only two USB-C (Thunderbolt 3 ports), so it heavily benefits from a dock that expands its connectivity options.

CalDigit includes a 0.5-meter USB-C cable in the box, which may be a little short for the needs of some. However, the company offers a slightly higher-priced SKU that includes a 1-meter cable as well. Either way, it shouldn’t be a big deal, as you can always use a third-party USB-C cable as long as it’s certified.

For the record, CalDigit’s dock isn’t a Thunderbolt 3 dock, but it does work with the USB-C form factor, which is used by ThunderBolt 3. CalDigit’s dock supports USB 3.1 gen 1 (5Gbps), and allows users to connect external displays via its DisplayPort or HDMI port found on its rear. 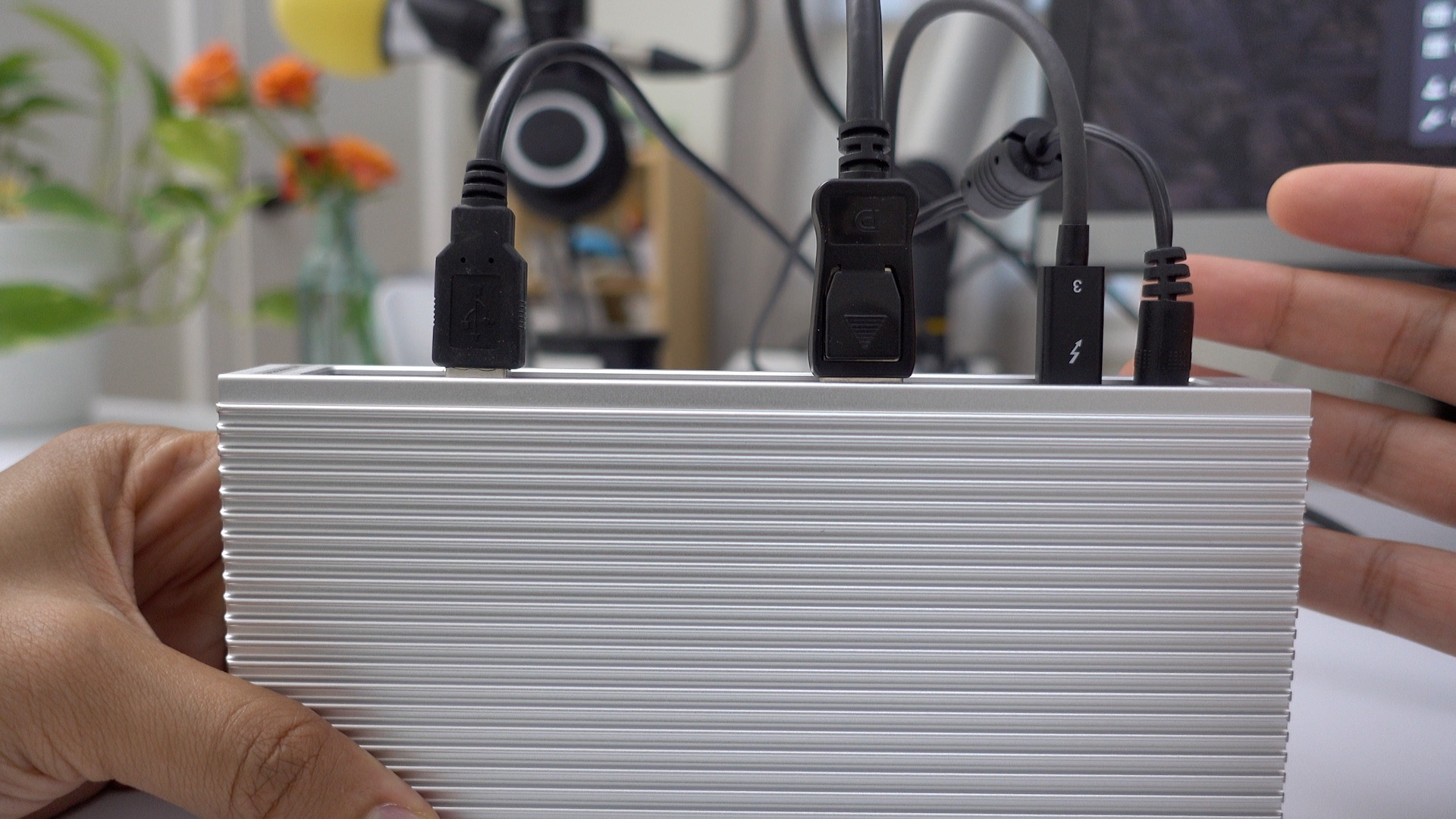 Although I knew going into this review that CalDigit’s dock only supported USB and not Thunderbolt, I was a little disappointed to learn that the dock is USB 3.1 gen 1-only. USB 3.1 gen 2, which is the real implementation of USB 3.1, affords much faster speeds — up to 10 Gbps.

Admittedly, there aren’t many USB devices yet available that support this higher USB 3.1 gen 2 speed, and the legacy devices that the majority of people connect will be USB 3.0 or slower. With this in mind, I suppose it’s not a very big deal, but it does limit the growth potential of the dock.

As noted, CalDigit’s USB-C Dock makes it easy to quickly add a plethora of ports to the MacBook Pro. Here is a brief look at all of the connections that you’ll find on this dock. 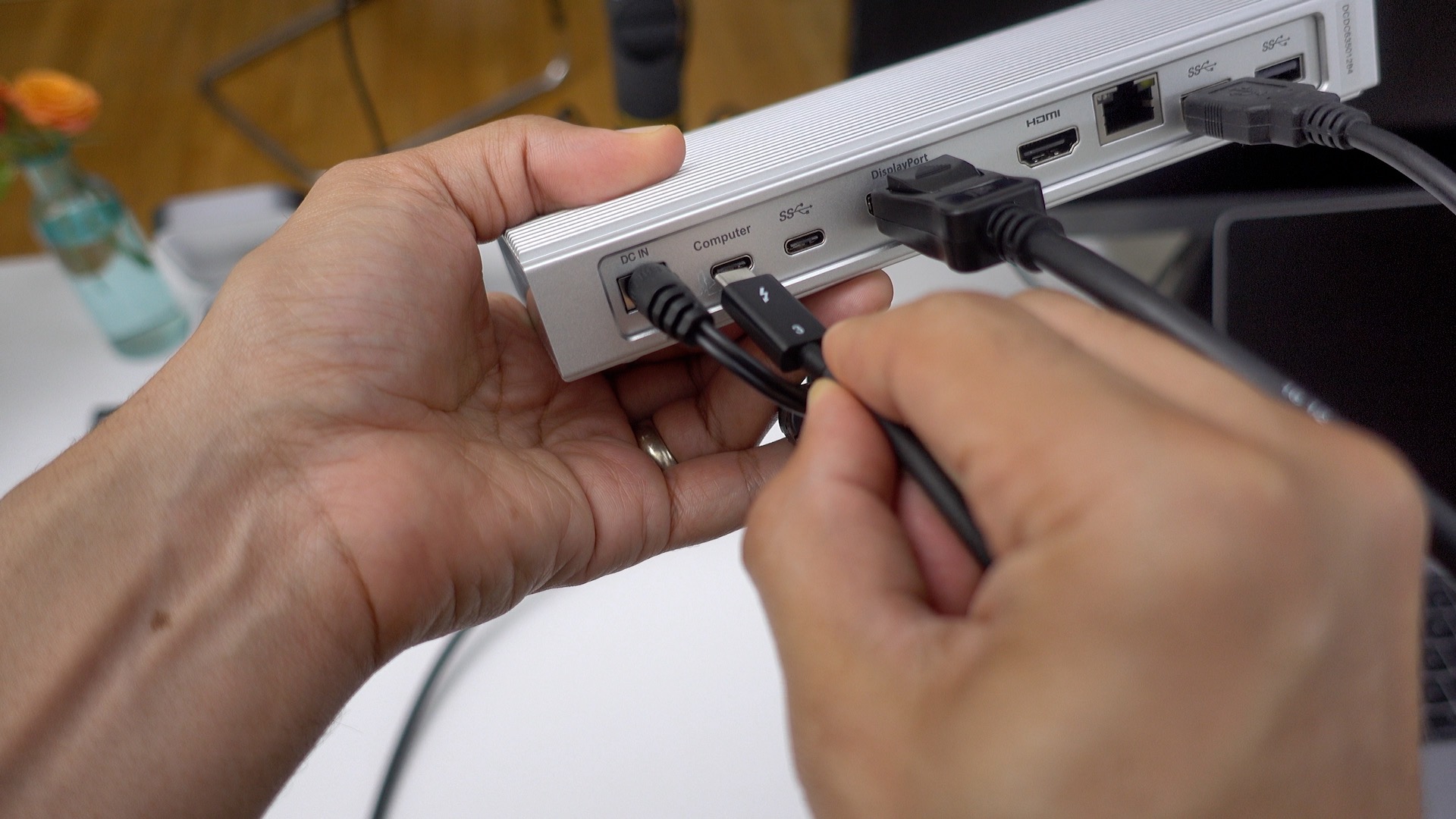 CalDigit includes three legacy USB-A ports for connecting peripherals to your MacBook that have not yet been updated with USB-C cables. You’ll find two USB-A ports on the rear of the dock, and another USB-A port conveniently located on the front of the dock. The front-facing USB-A port supports faster charging (5V @ 2.1A), which will recharge an iPhone faster than the typical 5W power adapter that Apple includes with its phones.

CalDigit includes a handy “Docking Station utility” that runs in your Mac’s menu bar. This utility allows users to quickly disconnect all USB storage devices safely in one fell swoop.

You’ll find two USB-C ports on the rear of the CalDigit Dock. The first port is an uplink port that’s used to connect to your MacBook via the included USB-C cable.

The second port is for connecting other USB-C-enabled devices to the dock. This second USB-C port features the ability to provide 15W of power to an iPad or other device. I found this port to be unreliable when it came to charging my iPad or iPhone. It appears that when a display is connected, even at a low resolution, the dock is only able to provide 2W of power instead of 10W for an iPhone (or 15W for an iPad). An iPad Pro won’t even charge when fed 2W.

A single HDMI 2.0 port is located on the rear of the CalDigit unit as well. This HDMI port lets users easily connect to external displays, although 4K displays will be capped at 30 Hz.

CalDigit ships its USB-C dock with firmware that keeps 4K @ 60 Hz disabled. Users will be able to update the dock’s firmware to enable 4K @ 60 Hz, but the update tool is only available for Windows machines at the moment. As someone who has a hard time handling 30 Hz refresh rates, I tried to install the updated firmware via a Windows 10 VMWare instance, but couldn’t get it working. Thus, I went ahead and installed Windows 10 on a Boot Camp partition, and was able to successfully install the updated firmware.

CalDigit provides both the upgraded and stock firmware via a download. The process is fairly painless, but you’ll need to wait a few minutes before the installation completes. If you ever wish to downgrade back to stock firmware, the process is just as easy. 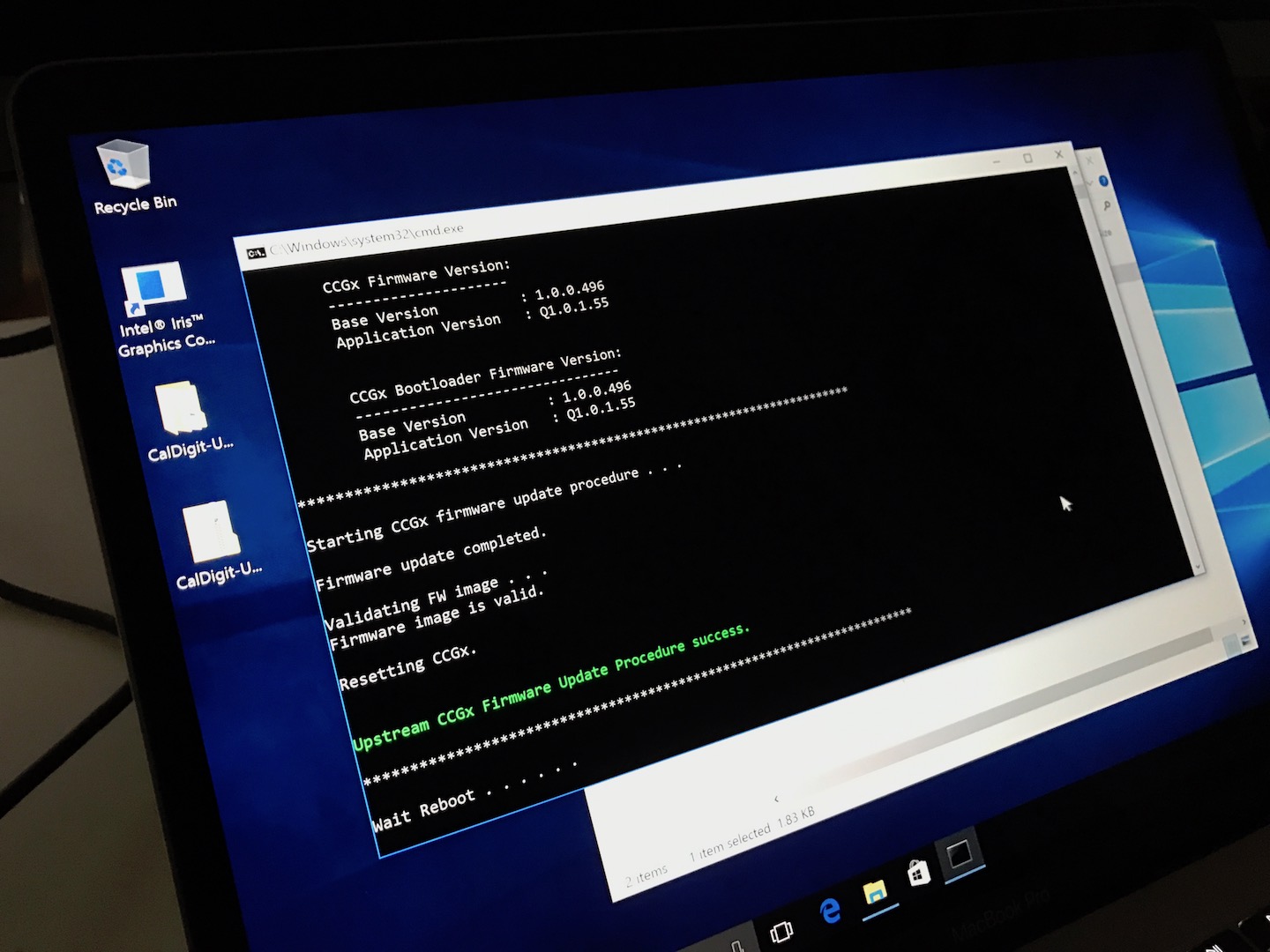 Managing firmware via Windows 10 running on a Boot Camp partition

After the firmware was installed, I was able to output full 4K resolution at a silky smooth 60 Hz on the AOC 32″ 4K monitor that I’m currently testing. I used SwitchResX to quickly change resolutions, and confirmed the refresh rate within the macOS System Information Utility. Needless to say, the firmware upgrade made a huge difference as far as usability is concerned. 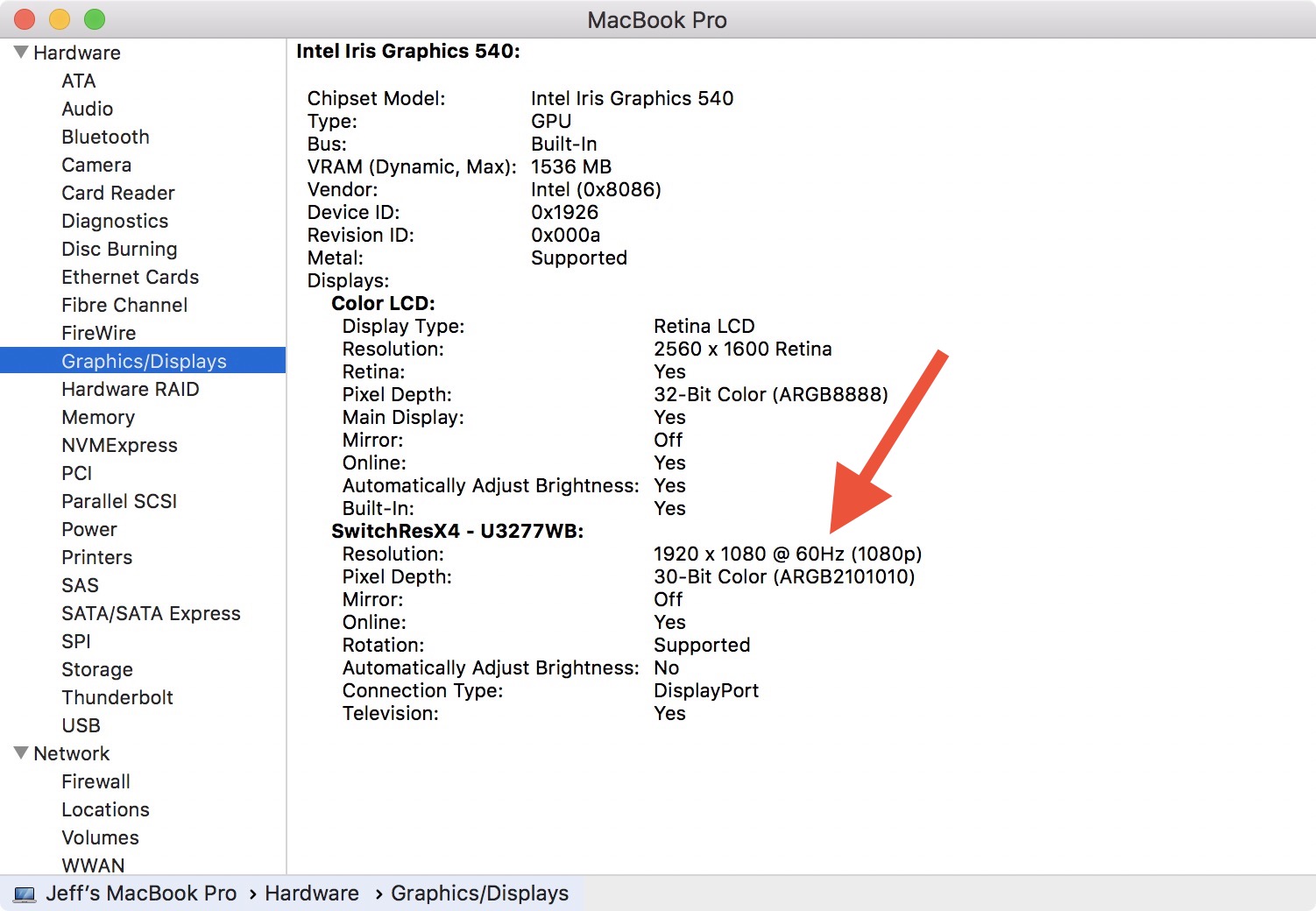 So what’s the compromise that I’ve been harping about? It’s not the fact that you’ll have to update the firmware using Windows, though that is annoying for sure. It’s the fact that upping the display output capabilities puts the kibosh on USB bandwidth for any devices connected to the dock’s four USB ports. Yes, bandwidth is outright reduced after updating the firmware, even if you’re not connected to a display running 4K @ 60 Hz. I also noticed that charging output for the 15W USB-C port was reduced as well. 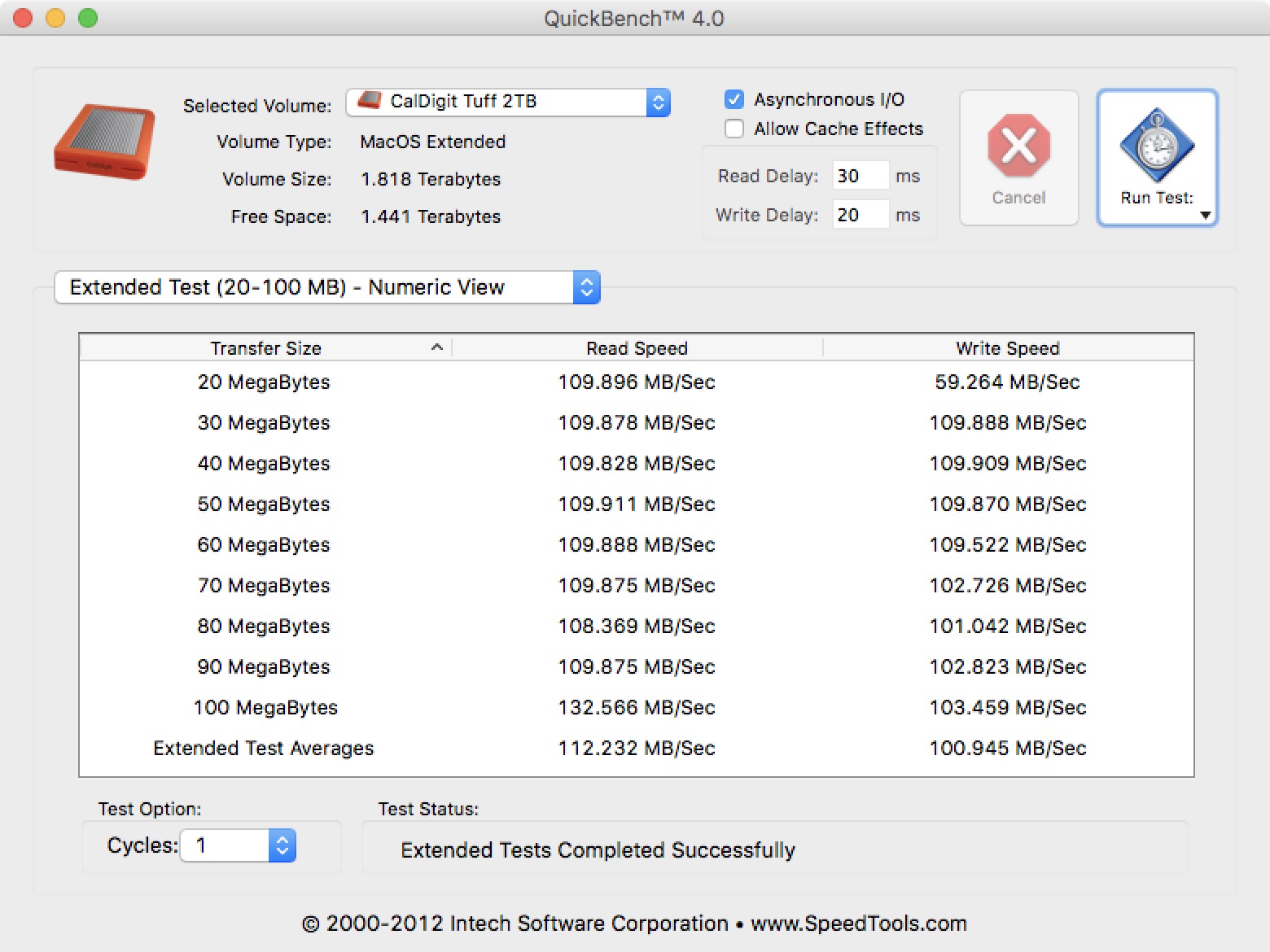 By updating the firmware to lend more display bandwidth, you’re essentially downgrading the amount of available bandwidth for all USB devices. As a result, any device connected to the USB ports will slow down to USB 2.0 speeds. It’s similar to the situation that occurs with the LG USB-C 4K display that we reviewed earlier in the year. 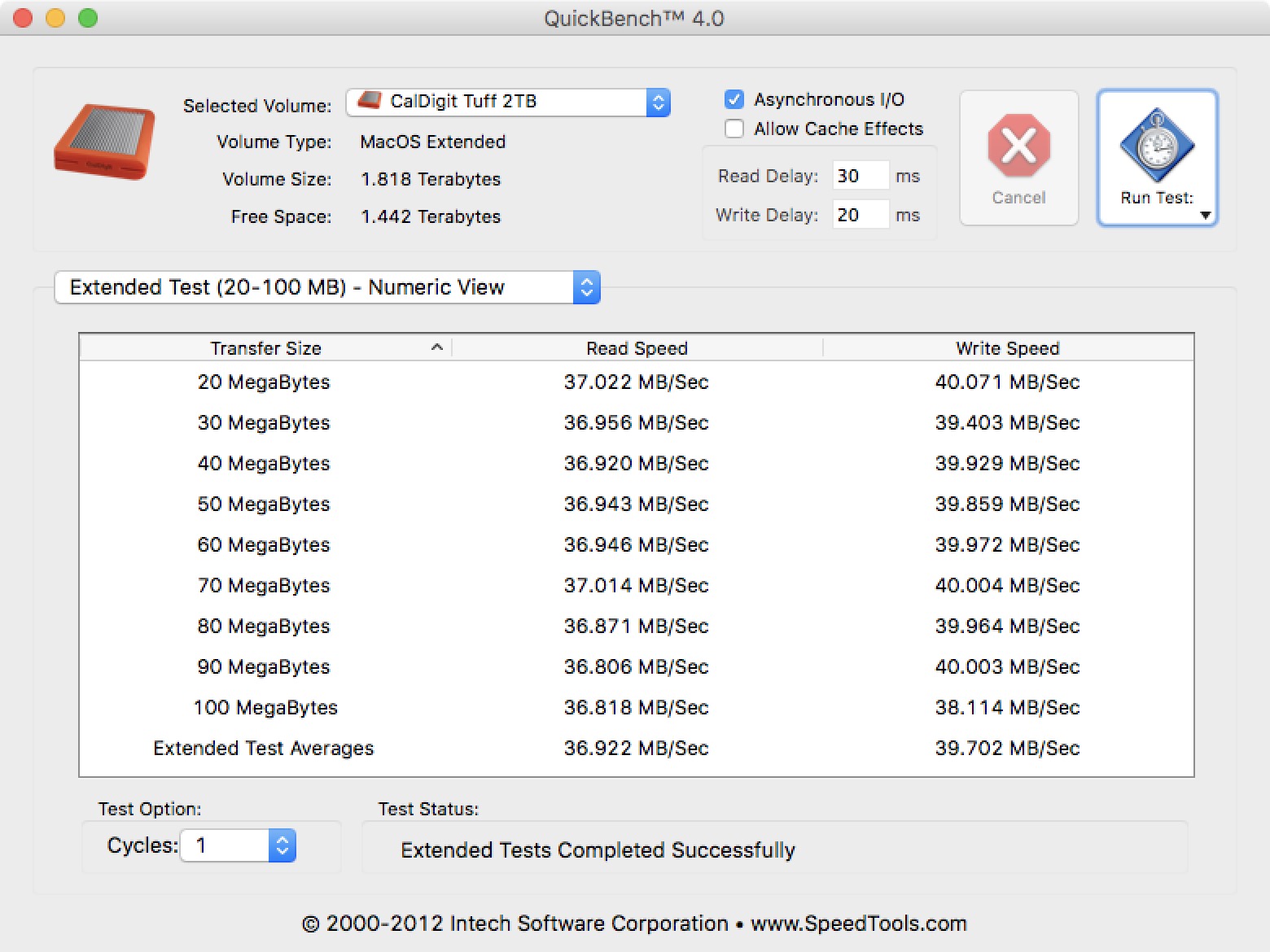 …and after the upgrade

There’s currently no ETA as to when the firmware tool will be available to Mac users, but if you’re considering this dock for connecting to an external 4K display, and 60 Hz is a must, you’ll need to be aware of the substantial negative effect it will have on USB bandwidth. If you’re not someone who plans on running a 4K display, or simply don’t care about 60 Hz refresh rates, then you’ll be able to retain full USB bandwidth with no issues.

If you prefer to connect your MacBook to your local network via Ethernet, then you’ll be happy to have a Gigabit Ethernet connection readily at your disposal. You will, however, need to install an Ethernet LAN driver provided by CalDigit.

Alongside the USB-A port on the front of the dock, you’ll find a pair of 3.5mm inputs for microphone and headphone connections. Surprisingly, the new MacBook Pro does retain its 3.5mm headphone port, but it’s nice to be able to use the dock’s port, which lets users maintain the clean look of a single cable connection.

It’s a great feeling to be able to connect a single cable and instantly have access to a display, external drives, my audio mixer and microphone, headphones, and even Gigabit Ethernet. What makes such a setup even better is that you don’t have to use the MacBook’s included 61W USB-C power adapter, or the 2-meter USB-C cable that comes with it. It means you can keep your MacBook charger in your laptop bag or plugged in to a wall for use while away from your desk.

If there’s one major head-scratcher of an omission, it’s the lack of an SD Card reader. That seems like such an obvious thing to include on a dock that’s marketed at MacBook users. The lack of an SD Card slot has been the subject of some of the most vocal debates concerning the new MacBook Pro, so I feel like CalDigit missed a big opportunity here. 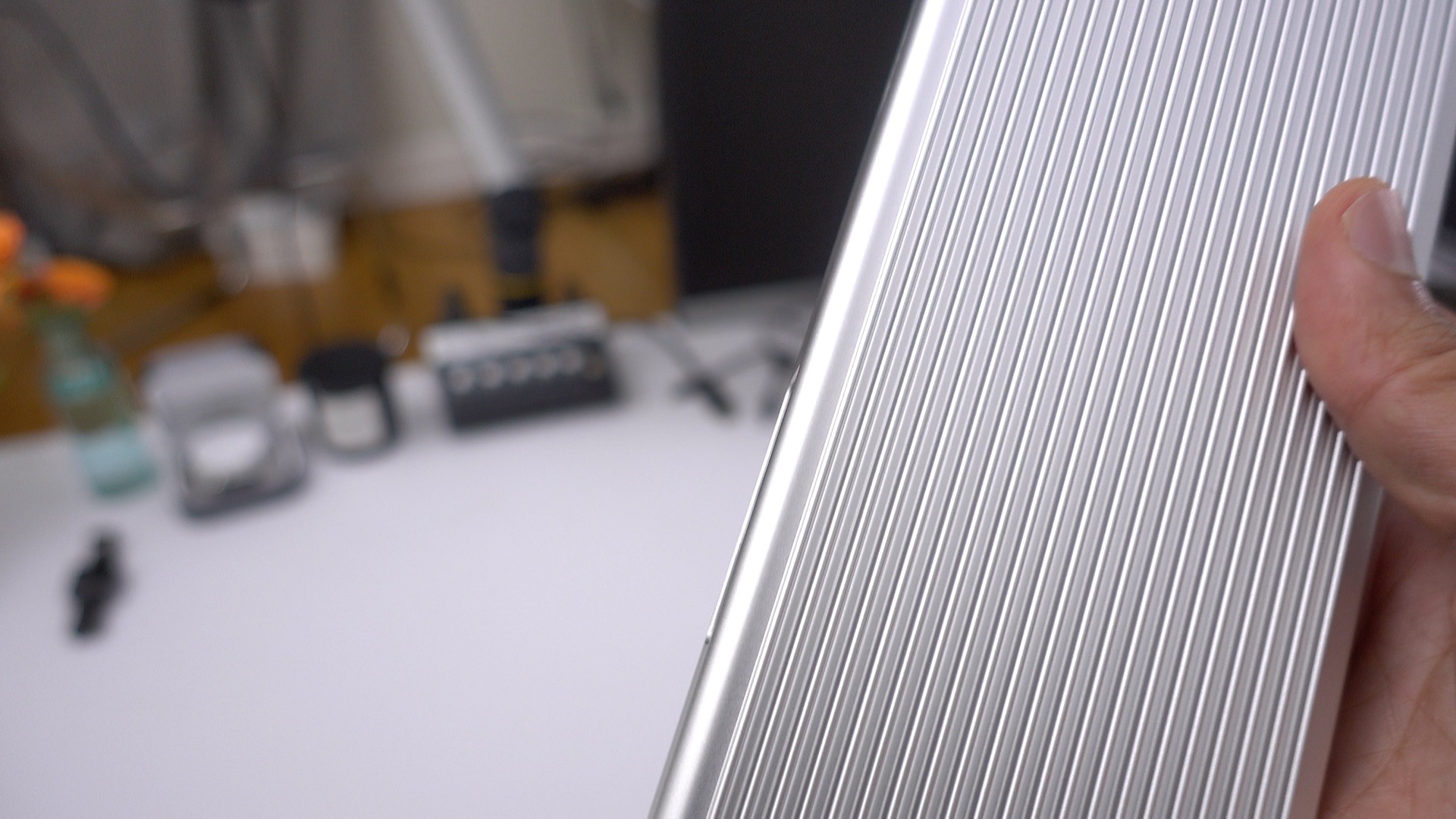 But the biggest downside of the CalDigit USB-C Dock is the lack of Thunderbolt 3, which means that there’s a lack of 4K support at 60 Hz unless you’re willing to sacrifice USB bandwidth. And even if you’re willing to give up said bandwidth, you’d need access to a Windows machine to install the firmware that makes it possible.

Personally speaking, I think that having 4K @ 60 Hz takes a bigger priority over USB bandwidth. If you own a MacBook with four USB-C ports, you can always use one of those extra ports for connecting devices like external drives.

All of that said, there will be those who don’t plan on connecting to a 4K display, and/or those who are fine running 4K @ 30 Hz. For these ones, the CalDigit USB-C Dock is a flawed, but okay stop-gap solution until Thunderbolt 3 accessories and docks become more prevalent.

You can find the CalDigit USB-C dock for around $150, or for slightly higher if you want the included 1-meter USB-C cable. If you’re on the prowl for additional CalDigit USB-C accessories, be sure to check out our hands-on review of the company’s 2TB USB-C external Tuff Drive.